Minutes of the Swedish Dinner

The Club’s Swedish dinner – its first ”occasion” since, its foundation – was held at the Midland Hotel, Birmingham, on Wednesday, October 15th, with Prof. A.C Frazer as chief “Sponsor” and “Compere”. The chairman presided and the following thirty-one other members attended:-

New-members were seated beside their nominators. Reception was at 7.0 for 7.30 p.m. dinner. Foundation members recalled With great regret that Sir Jack Drummond, so helpful a guest in January, was murdered in France on August 5th, with his wife and daughter. 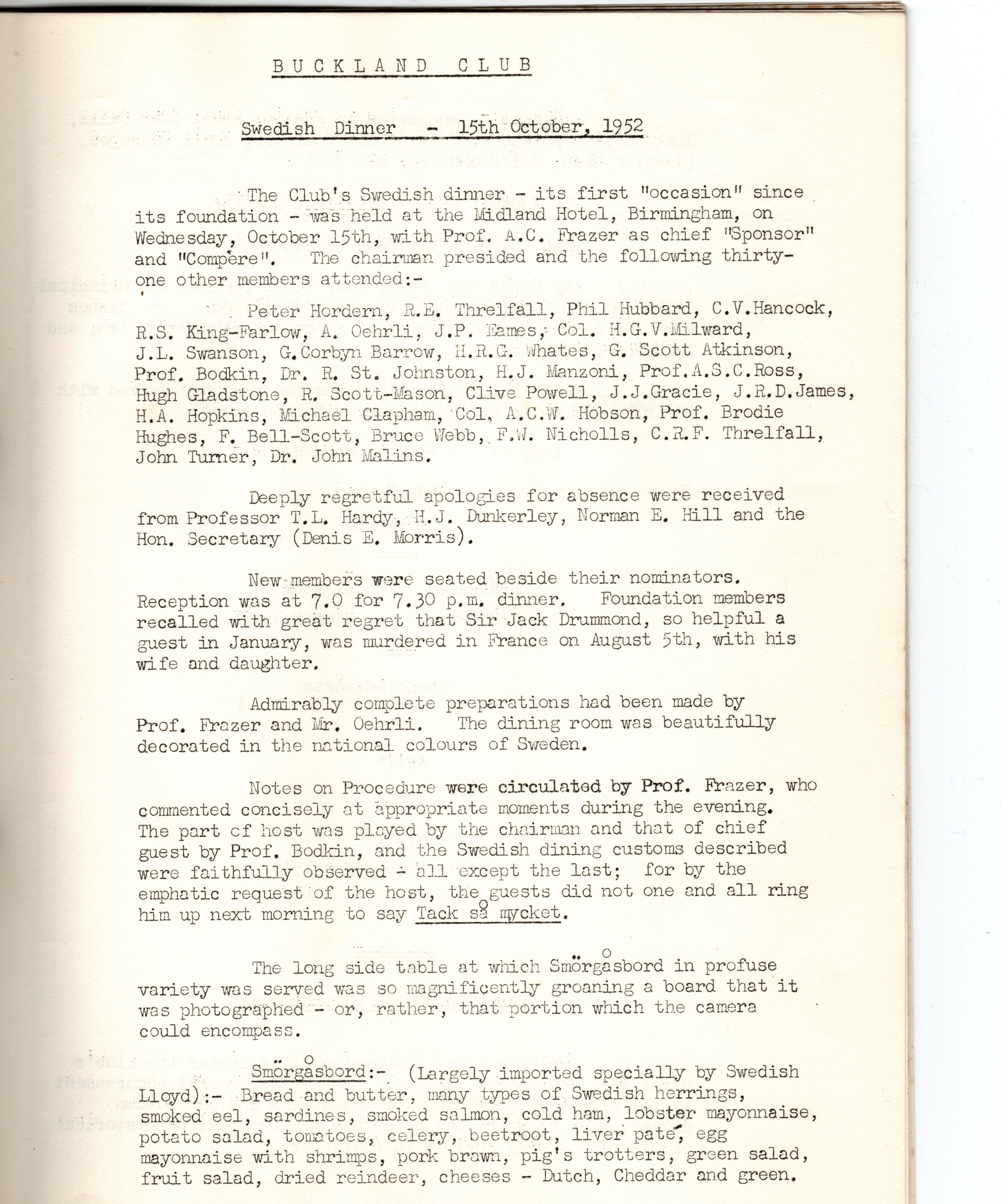 Admirably complete preparations had been made by Prof. Frazer and Mr. Oehrli. The dining room was beautifully decorated in the national colours of Sweden.

Notes on Procedure were circulated by Prof. Maser, who commented concisely at appropriate moments during the evening. The part of host was played by the chairman and that of chief guest by Prof. Bodkin, and the Swedish dining customs described were faithfully observed – all except the last; for by the emphatic request of the host, the guests did not one and all ring him up next morning to say Tack så mycket.

The long side table at which Smörgåsbord in profuse variety was served was so magnificently groaning a board that it was photographed – or, rather, that portion which the camera could encompass. 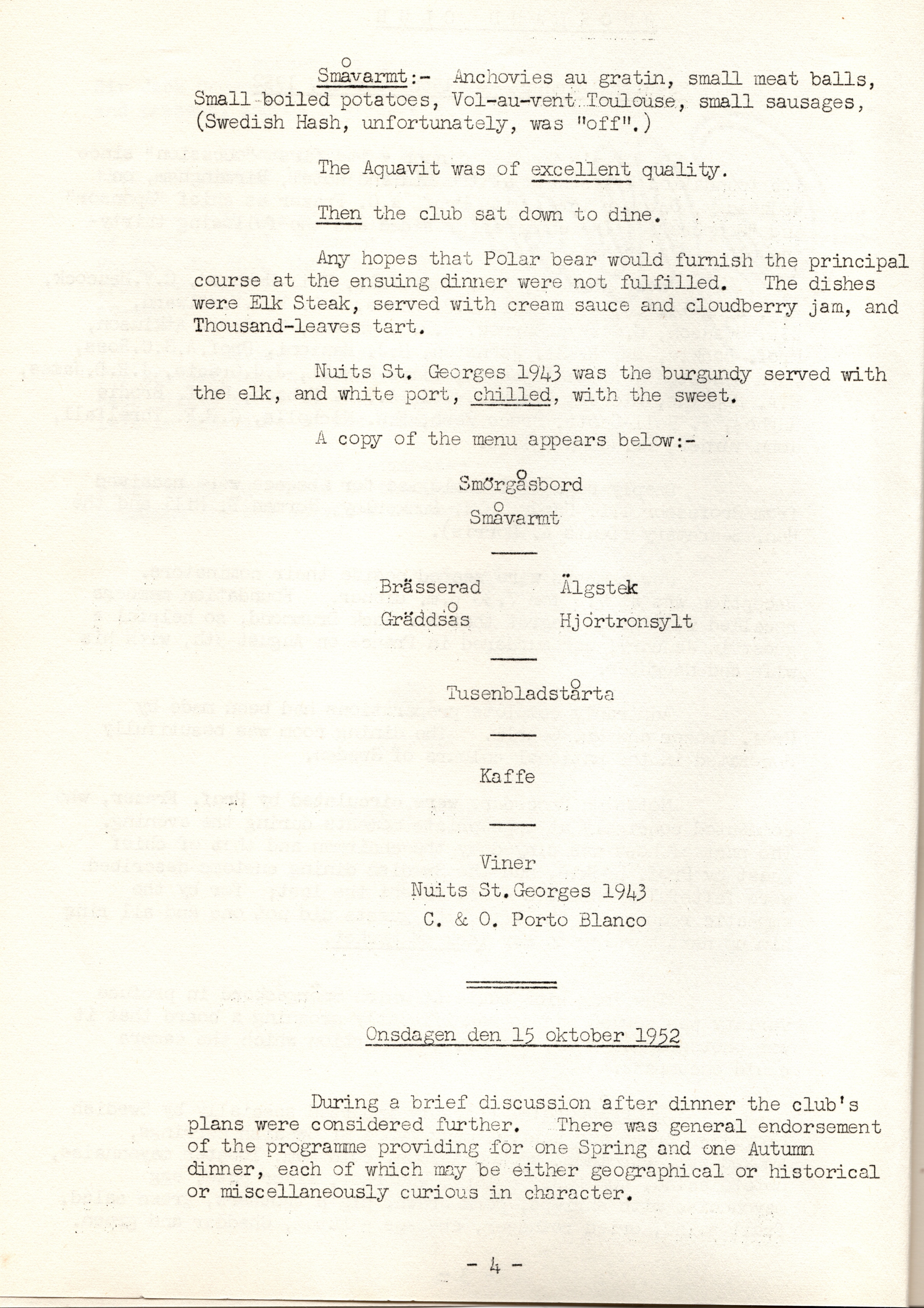 The Aquavit was of excellent quality.

Then the club sat down to dine.

Any hopes that Polar bear would furnish the principal course at the ensuing dinner were not fulfilled. The dishes were Elk Steak, served with cream sauce and cloudberry jam, and Thousand-leaves tart.

Nuits St. Georges 1943 was the burgundy served with the elk, and white port, chilled, with the sweet.

A copy of the menu appears below:-

During a brief discussion after dinner the club’s plans were considered further. There was general endorsement of the programme providing for one Spring and one Autumn dinner, each of which may be either geographical or historical or miscellaneously curious in character.

It was agreed to enlarge the membership further, to a maximum of sixty, and nominations were invited for the committee’s consideration.

Professor Bodkin was added to the committee – a gesture of gratitude inspired by lively expectation of an Old Irish dinner to come in no distant future.

By universal assent this Swedish dinner had set the Buckland Club firmly  on its legs – if that is what a supremely good dinner ever does. 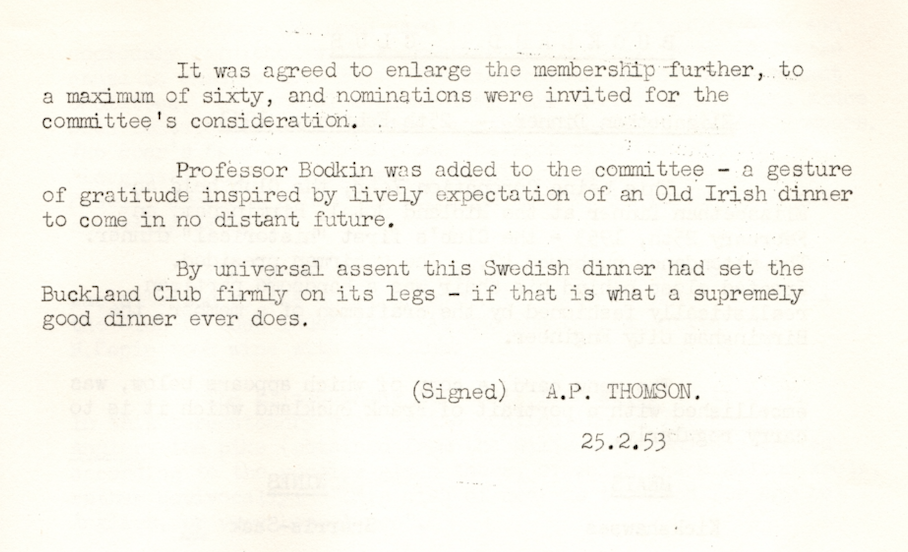