Minutes of the Yugoslav Dinner 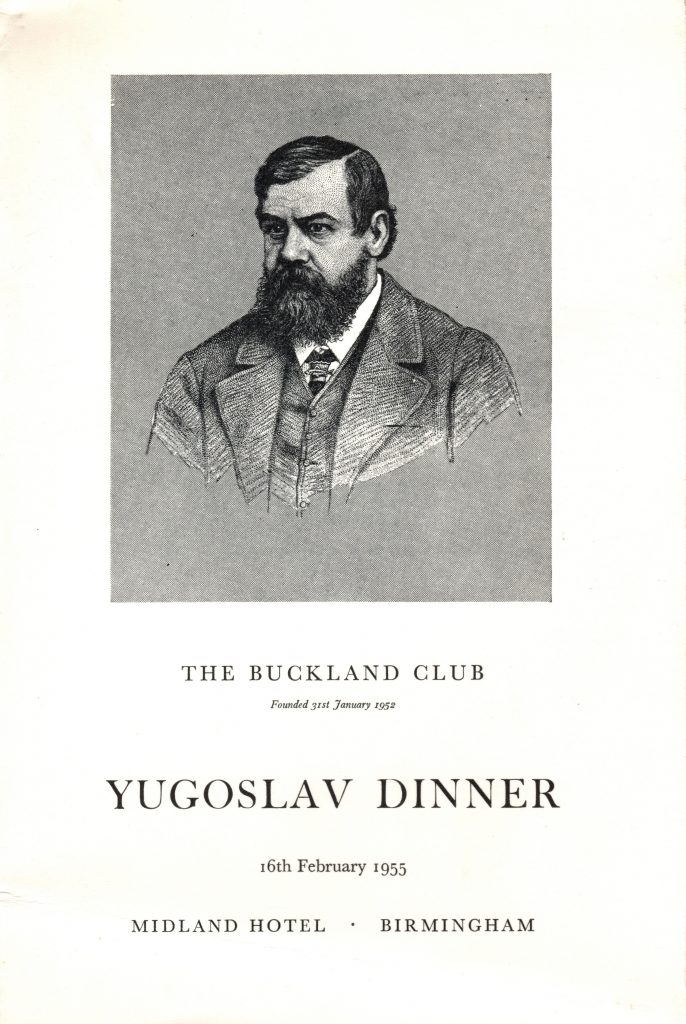 The Chairman, Professor A.P. Thompson, presided, and the dinner was sponsored by a member, Mr. Michael Clapham. The guests of the Club were Brigadier Frank Buckland, R.A.M.C., a great-nephew of the Club’s eponymous hero, and Mr. Stephen Burman, Pro-Chancellor-elect of the University of Birmingham. 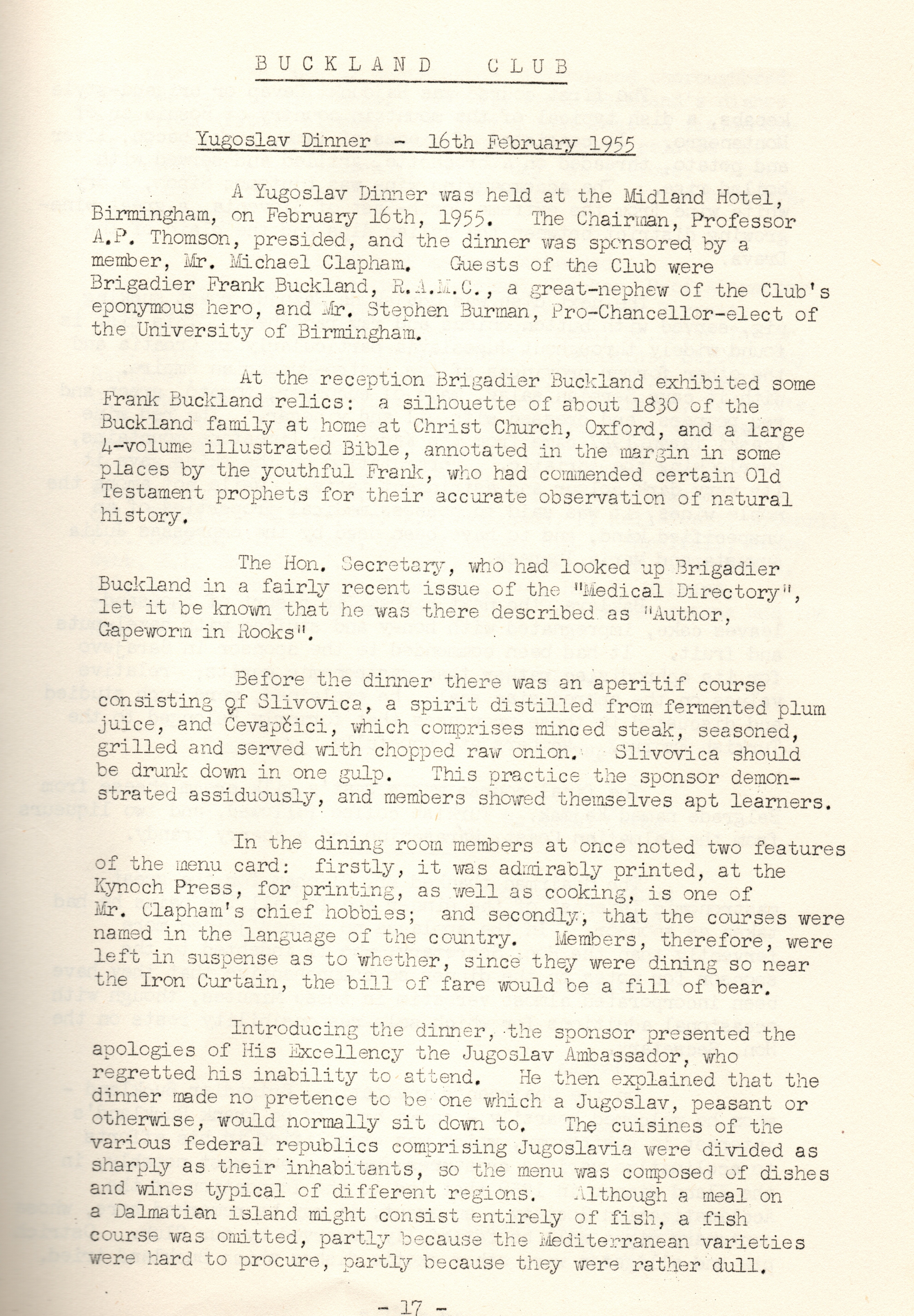 At the reception Brigadier Buckland exhibited some Frank Buckland relics: a silhouette of about 1830 of the Buckland family at home at Christ Church, Oxford, and a large 4-volume illustrated Bible, annotated in the margin in some places by the youthful Frank, who had commended certain Old Testament prophets for their accurate observation of natural history.

The Hon. Secretary, who had looked up Brigadier Buckland in a fairly recent issue of the ”Medical Directory”, let it be known that he was there described as “Author, Gapeworm in Rooks“.

Before the dinner there was an aperitif course consisting Slivovica, a spirit distilled from fermented plum juice, and Cevapcici, which comprises minced steak, seasoned, grilled and served with chopped raw onion. Slivovica should be drunk down in one gulp. This practice the Sponsor demonstrated assiduously, and members showed themselves apt learners.

In the dining room members at once noted two features of the menu card: firstly, it was admirably printed, at the Kynoch Press, for printing, as well as cooking, is one of Mr. Clapham’s chief hobbies; and secondly, that the courses were named in the language of the country, Members, therefore, were left in suspense as to whether, since they were dining so near the Iron Curtain, the bill of fare would he a fill of bear.

Introducing the dinner, the sponsor presented the apologies of His Excellency the Jugoslav Ambassador, who regretted his inability to attend. He then explained that the dinner made no pretence to be one which a Jugoslav, peasant or otherwise, would normally sit down to, The cuisines of the various federal republics comprising Jugoslavia were divided as sharply as their inhabitants, so the menu was composed of dishes and wines typical of different regions. Although a meal on a Dalmatian island might consist entirely of fish, a fish course was omitted, partly because the Mediterranean varieties were hard to procure, partly because they were rather dull. 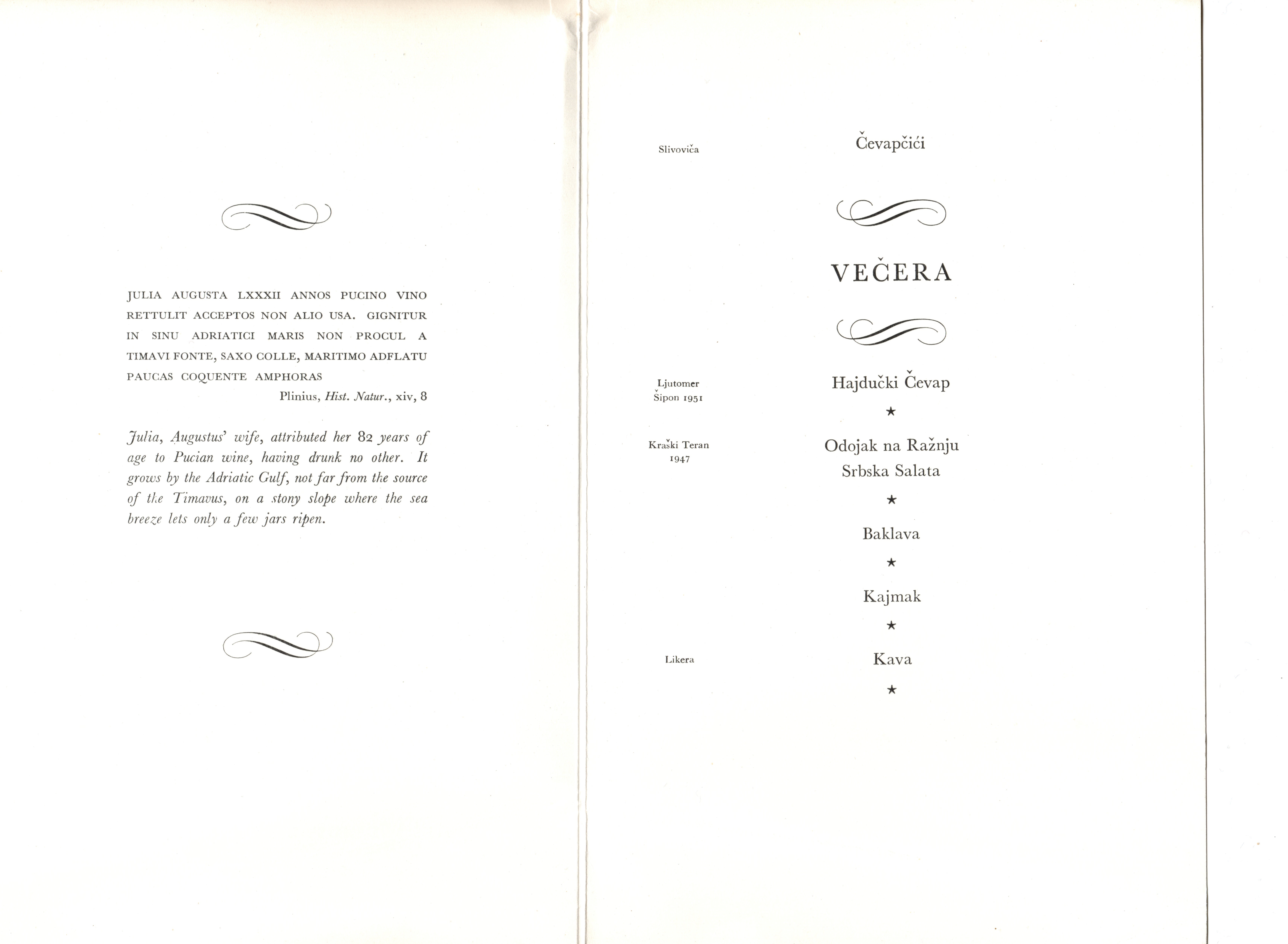 The first course was Hajducki Cevap or brigand-style kebabs, a dish typical of the mountain country of Bosnia or of Montenegro. It consisted of pieces of lamb, pork, bacon, liver and potato, threaded on brochette, grilled and served with boiled rice. The accompanying wine was Ljutomoz Sipon, a white wine from the extreme North-East of Slovenia, a great wine growing district between the Julian Alps and the plain of the Drava.

The next dish was Odajak na Raznju, roast sucking pig, served with button onions and raw radishes. This dish is found widely throughout Jugoslavia particularly in Croatia and the other former provinces of the Austro-Hungarian empire.

With it came Serbian salad, made of cucumber, tomato, green and red peppers, and dressed with oil and vinegar. The red wine Kzaski Teran 1947 came from the Karst, or limestone mountains, overlooking the Adriatic. Fermentation on the skins gave it its very dark colour and astringent taste. While not among the noble wines, it was said to possess medical properties of an unspecified kind, and to have been used by the Empresses Julia Augusta and Maria Theresa.

Bakláva, the next course, is a sort of thousand-leaves cake, impregnated with honey and stuffed with hazel~nuts and fruit. It had been commended to the sponsor in Sarajevo for its aphrodisiac rather than gastronomic merits; relative values on the aphrodisiac scale, he explained, were much studied and discussed in those provinces that formerly belonged to the Turkish Empire. Members ate hopefully.

The final course was a goat’s milk cream cheese from Belgrade named Kajmak. Turkish coffee followed, and two liqueurs from the Dalmatian Coast, Máraschino and a cherry brandy.

The Chairman thanked Mr. Clapham for the great gastronomic interest of the dinner and for all the pains he had taken as Sponsor. In the applause no member joined more fervently than the Hon. Secretary, who is indebted to the Sponsor for notes on the dinner so comprehensive that they have been incorporated almost verbatim in these Minutes, though with occasional additions for which sole responsibility rests on the Hon. Secretary.

On the Chairman’s invitation, Brigadier Buckland – whom he welcomed heartily – spoke briefly on Frank Buckland’s interest in gastronomy, which was exemplified in his efforts to acclimatise various creatures for food and most notably, in the Eland dinner in 1859 that led to the foundation of the Acclimatization Society an event, it may be remarked here, whose centenary might well be faithfully observed by our Club. Ostrich pie and alligator were other exotic dishes which Buckland tried. 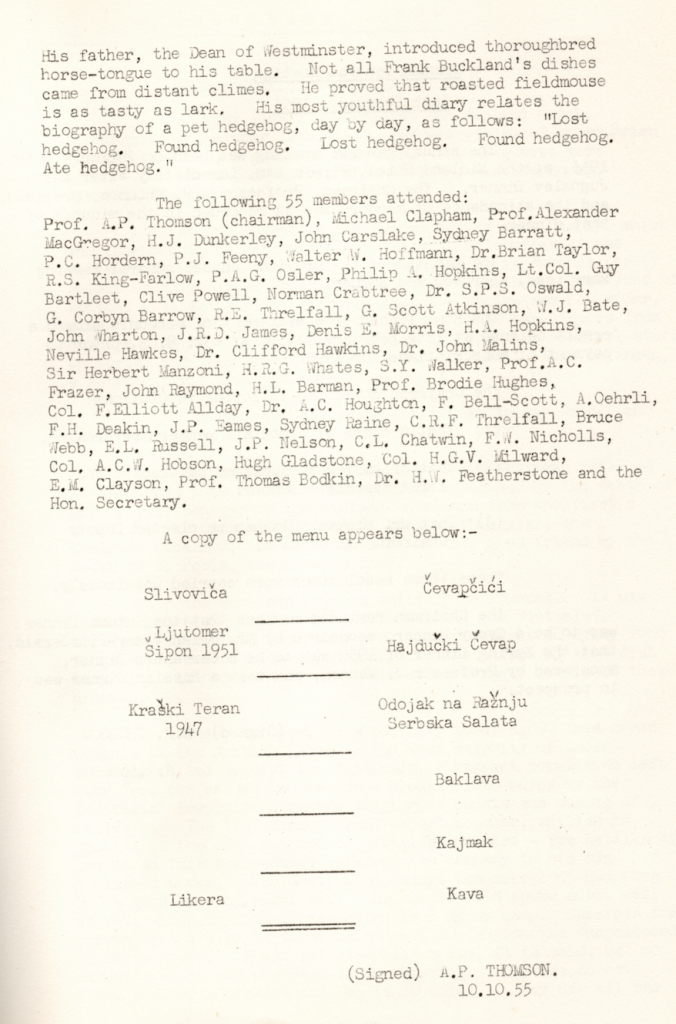