Minutes of the Gypsy Dinner

A Gypsy Dinner was held at the Midland Hotel, Birmingham, on October 12th, 1955, and was sponsored by Mr. Brian Vesey-FitzGerald, a guest of the Club. Other guests were Canon C.A.H. Lowe and Messrs. Phil Drabble, A.R. Marsh and Michael Shephard. 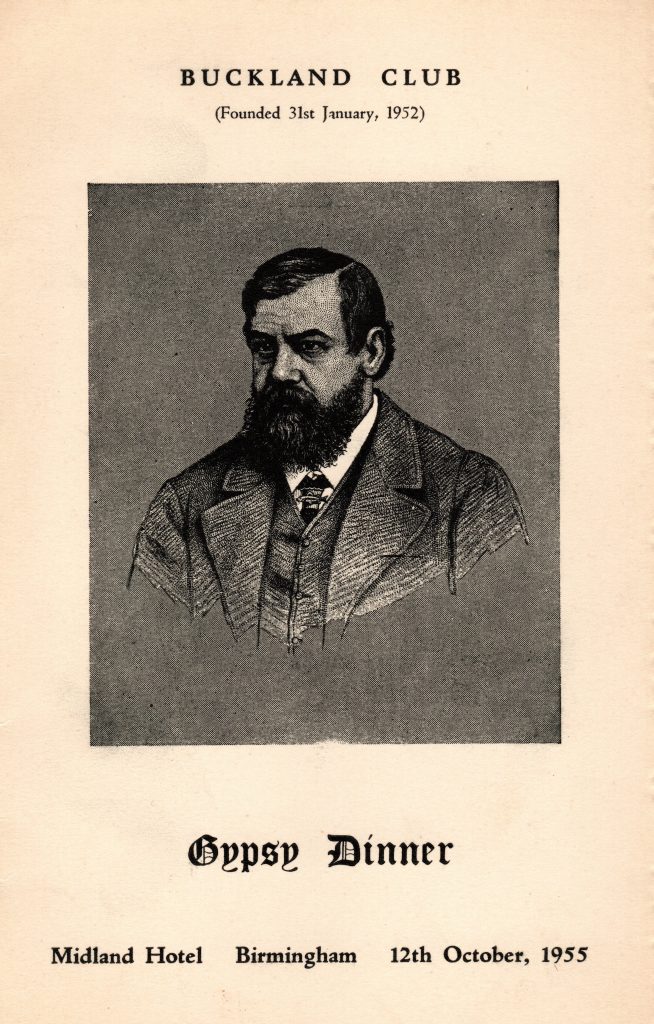 At the reception the drinks served were Sherry, which was intended to be Manzanilla but (it must be confessed) was rather wide of that mark, and Tato Pani, which is Romanes for Whisky usually either Irish or dye, since Gypsies are less fond of Scotch. It was a pity, perhaps, that the choice was not wider, since Gypsies are great people for making their own liquors from country plants. Gypsy dandelion wine is about the headiest stuff on earth, and they have even been known to distil, like Irishman, a potent spirit from potatoes.

The Chairman called on Canon Lowe to say Grace, and then remarked on its charity (sic).

The menu was printed entirely in Romanes. It was headed Hobbenesko Lil, meaning ”The Book of the Victuals”. Mr. Vesey-FitzGerald made some preliminary remarks on Gypsy food in general, but disclosed and described the nature of each dish only after it had been eaten. His notes largely furnished these minutes.

There are now, he said, only about 5,000 true nomad Romanis in the British Isles. The vast majority of those commonly called Gypsies are diddikais, a vagrant population left over from the casual labour force brought into being by the Industrial.Revolution for the digging of canals and making of railways. The true Romani is an expert poacher, skilled in picking up the odd pheasant or partridge or hare – for details of how to do this the sponsor referred the company to his own published works. The Gypsy also enjoys the succulent hedgehog and a good stew of rural rat. Mr. FitzGerald spoke quite well of rat, which he himself had eaten in a Gypsy Camp. Recipes for serving rat are to be found in Andre Simon’s “Concise Encyclopaedia of Gastronomy“. Roast rat resembles snipe, it is said, but no member’s mouth was observed to be watering. Gypsies do not steal poultry – because the hen is so noisy. They use all the fruits of the countryside and the edible fungi. They have been known to graft eating apples on to hedgerow crabs, and the sites of these trees are handed down from father to son. 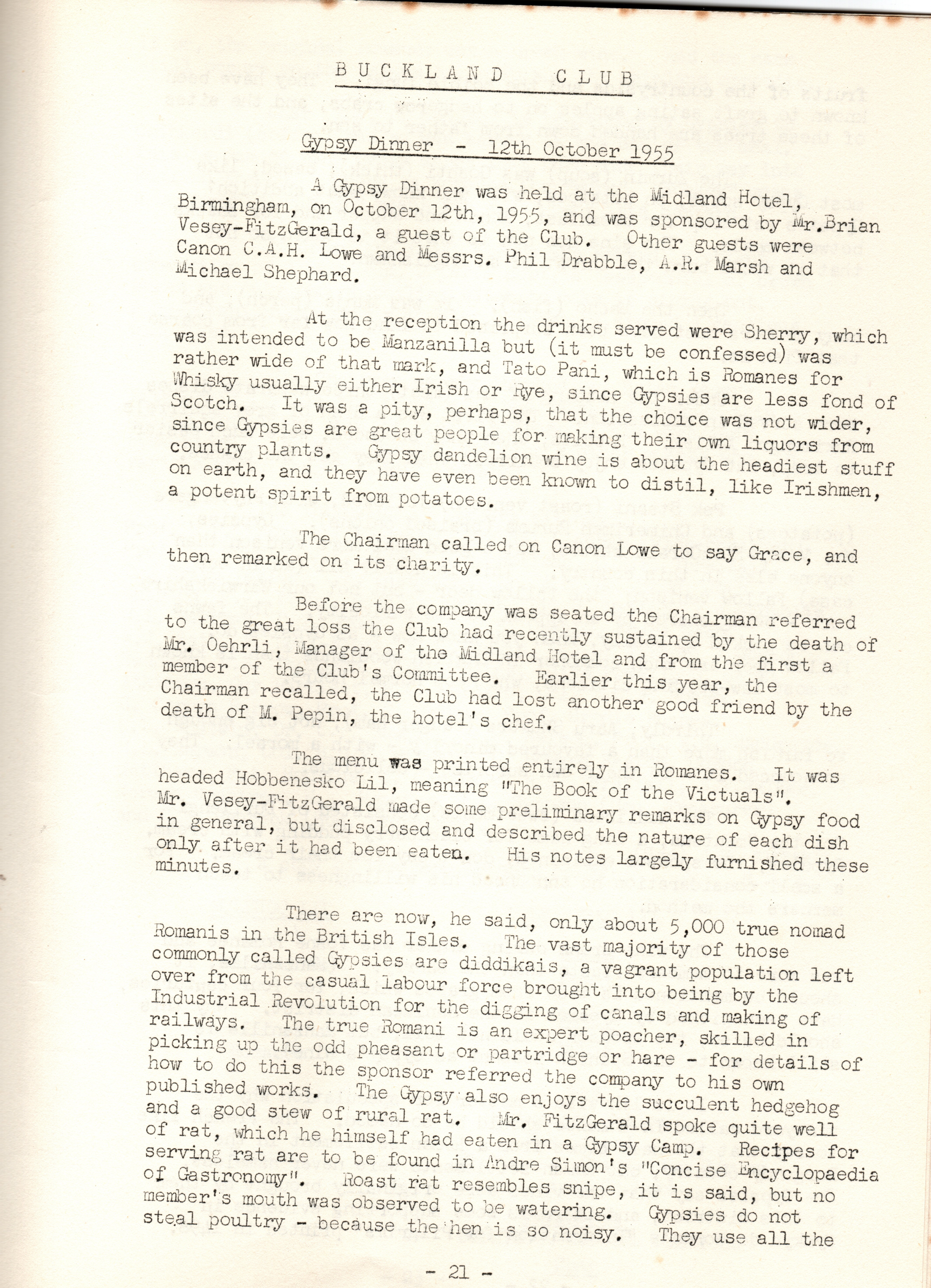 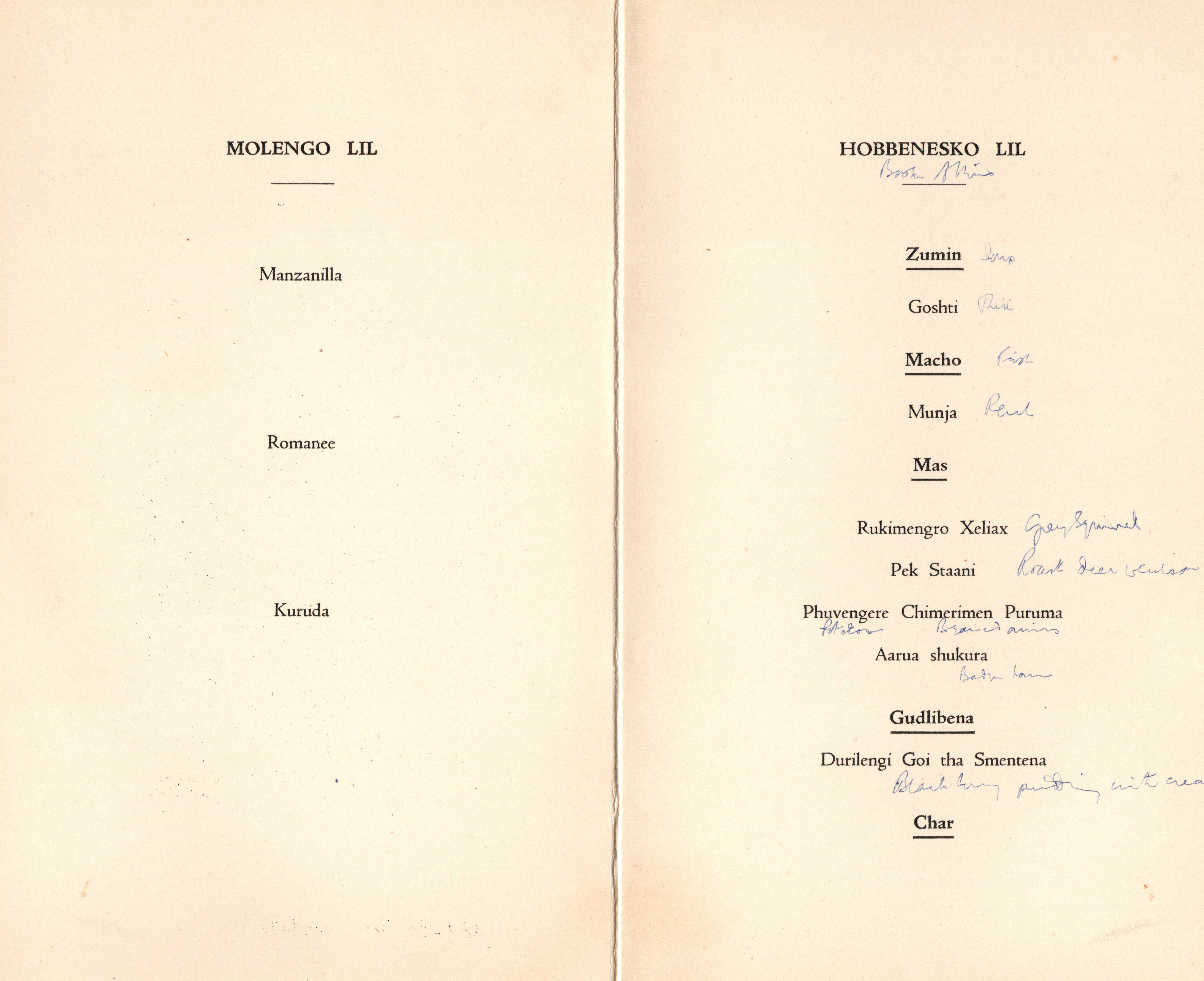 The Zurmin (soup) was Goshti (thick), based, like most Gypsy soups, on potatoes, with who knows what addition? Gypsies eat soup for breakfast, lunch and supper and for snacks between meals. The sine qua non is that it is taken so hot that it would burn the throat of an Englishman.’

Then the Macho (fish). It was Munja (perch), and many members must have been surprised to find how far from coarse that fish is.

Under the heading of Mas (meat) three separate dishes were served in succession. The first was a dish of grey squirrels Rukimengro Xeliax. Rabbits, when they abounded, were much easier to trap, but Gypsies enjoy squirrels when they get the chance.

Pek Staani (roast venison) followed, with Phyvengere (potatoes) and Chimerimen Puruma (braised onions). Gypsies, Mr. Vesey~EitzGerald stated, eat a good deal more venison than anyone else in this country. This is nearly all (as in our case) Fallow venison; the Fallow deer – but not our Warwickshire buck – being snared by an appeal to its curiosity. The fawns can be picked up easily, when you know how – as Gypsies do. Fallow deer are much commoner in English woodlands than is known to most law-abiding citizens, who keep normal hours.

Thirdly, Aaru Shukura (badger ham), not big enough to furnish more than a favoured minority – with a morsel. They pronounced it – to their own surprise – delicious.

The Gudlibena (sweetmeats) consisted of Durilengi Goi tha Smentena, a long name for blackberry pudding with cream. Gypsies, the sponsor explained, don’t pay for their cream. For a small consideration he announced his willingness to teach members the method.

The wine drunk during dinner was Vosné Romanee and was more to members’ taste than the sherry. (Manzanilla, it should be mentioned is made from grapes which, for four centuries, have been picked by Gypsies in the Sanlucan district. Why this should be so, the Sponsor could not tell, but Manzanilla is still known to the Spanish peasant as Gypsy’s wine).

It is likewise a matter for speculation why the vineyard called La Romanee should be so named. The French like to say that the name comes from a Roman settlement in the Burgundy country, but Roman settlements were never nameless. The Gypsies say that the vines were originally brought by them to this district, and there is some supporting evidence in Wynkyn de Word’s ”Information for Pilgrims” printed in l498. 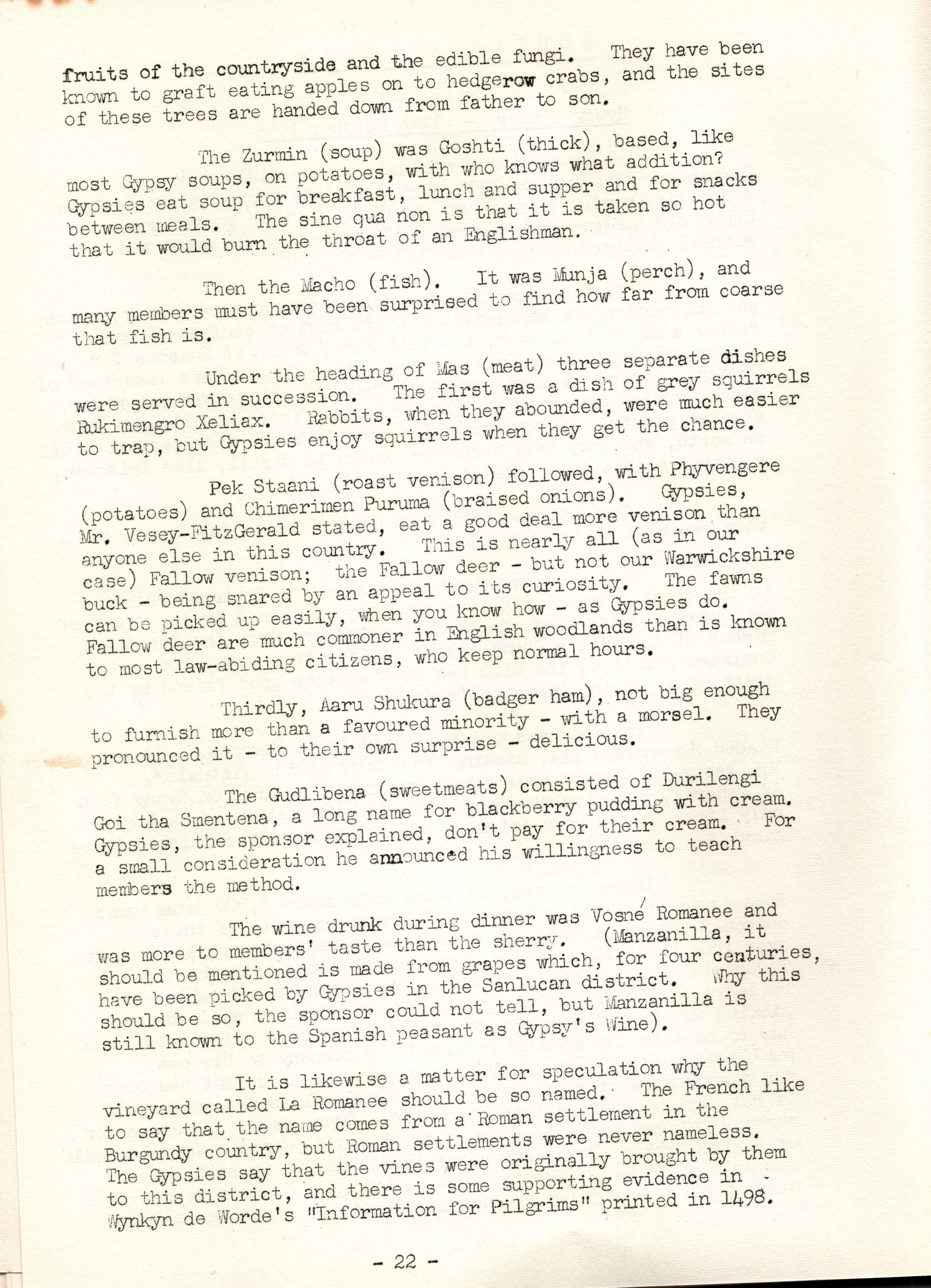 If so, the original Romanee was a Greek wine. And the name still occurs on the island of Corfu and the mainland opposite.

Char (tea, of course) is preferred by Gypsies to Chinkerdi (coffee) and so was served at the end of the meal. This is one of many Gypsy words that have made their way into English speech. Chore is Romanes for ”work”, ”Jockey” means a horse-whip, “Daddy” means ass and ”Posh“ is a bastard.

To crown the feast Kuruda was served, a potent concoction of 1 part rum, 2 parts port, a teaspoonful of brown sugar and only enough boiling water to make it piping hot. A he-Romani might swig a tumbler. members sipped a cautious wineglass.

The Chairman warmly thanked Mr. Brian Vesey-FitzGerald for all the trouble he had taken. to arrange this unique dinner and for the great interest of his excellent commentary. He also thanked the club’s other guests who, in various ways, had, so kindly assisted. 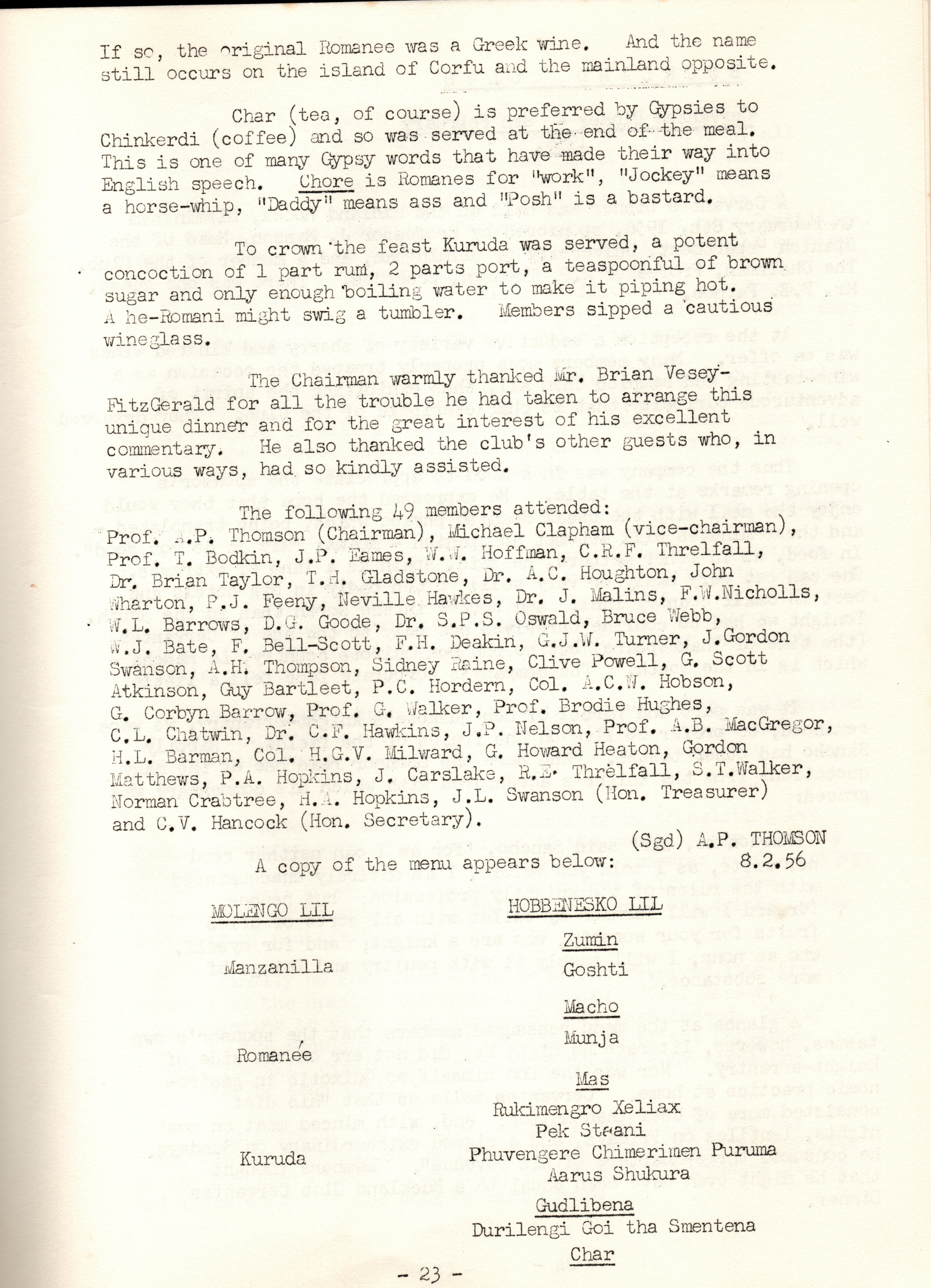