Minutes of the Cervantes Diner

A Cervantes Dinner was held at the Midland Hotel, Birmingham on February 8th, 1956, sponsored by Professor J. Manson, Head of the Spanish Department, University of Birmingham, and a member of the Club.The Chairman, Professor A.P. Thomson, presided. There was one guest, Mr. F.E. Pardoe. 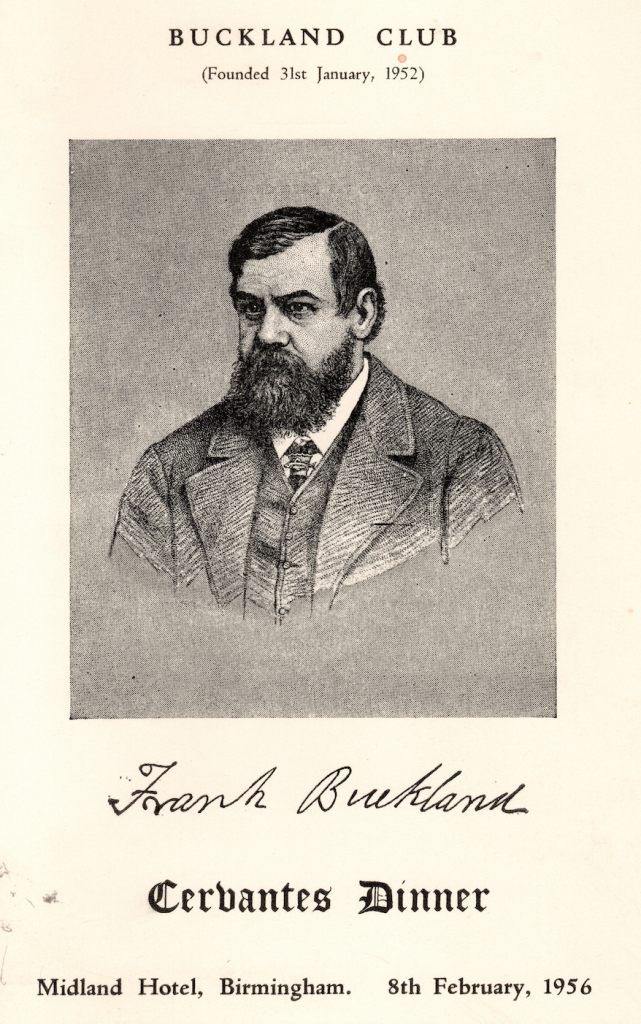 At the reception a seductive variety of sherry and kindred wines was on offer. Many members most properly treated the occasion as a wine-tasting and sampled them all, thus exhibiting the spirit of adventurous curiosity that is characteristic of the Club. They deserved well.

Thus the company was in a mood to appreciate the sponsor‘s opening remarks at the table. He expressed the hope that they would enjoy the meal with the usual Spanish phrase which, being translated – and these minutes will attempt no Spanish – means: “May it do you good”.

In food, as in other matters, he said, Spain is a land of extremes. One can eat very badly or very well; often badly in big hotels and best in small country inns and better in the North than in the South. Tonight we had to confine ourselves not only to the age of Cervantes, (the time of Shakespeare) but to the Don Quixote country, La Mancha – which is in the South. The company’s corporate face fell a little. 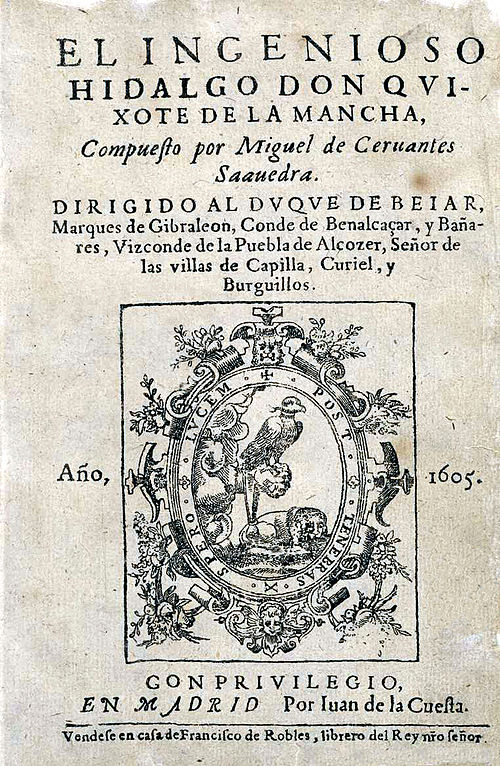 It was part and parcel of Don Quixote‘s knight-errantry, we were reminded, to prefer to live on the fruits of the fields. Happily Sancho had other tastes. And here the sponsor read one of the many quotations from the Knight’s adventures with which his commentary was graced:

‘Pardon me, sir’ said Sancho, ‘for as I can neither read nor write, as I told you before, I am entirely unacquainted with the rules of tie knightly profession; but hence-forward I will furnish my wallet with all sorts of dried fruits for your worship, who are a knight; and for myself, who am none, I will supply it with poultry and Things of more substance.‘

A glance at the menu reassured members that the sponsor’s own tastes, however, literate he might be, did not err on the side of knight-errantry. Nor was the Don himself so Quixotic in gastronomic practice at home. Cervantes tells us that “his diet consisted more of beef than mutton; and, with minced meat on most nights, lentils on Fridays, and a pigeon extraordinary on Sundays, he consumed three-quarters of his revenue”. Members thought that he might even have been equal to a Buckland Club Cervantes Dinner. 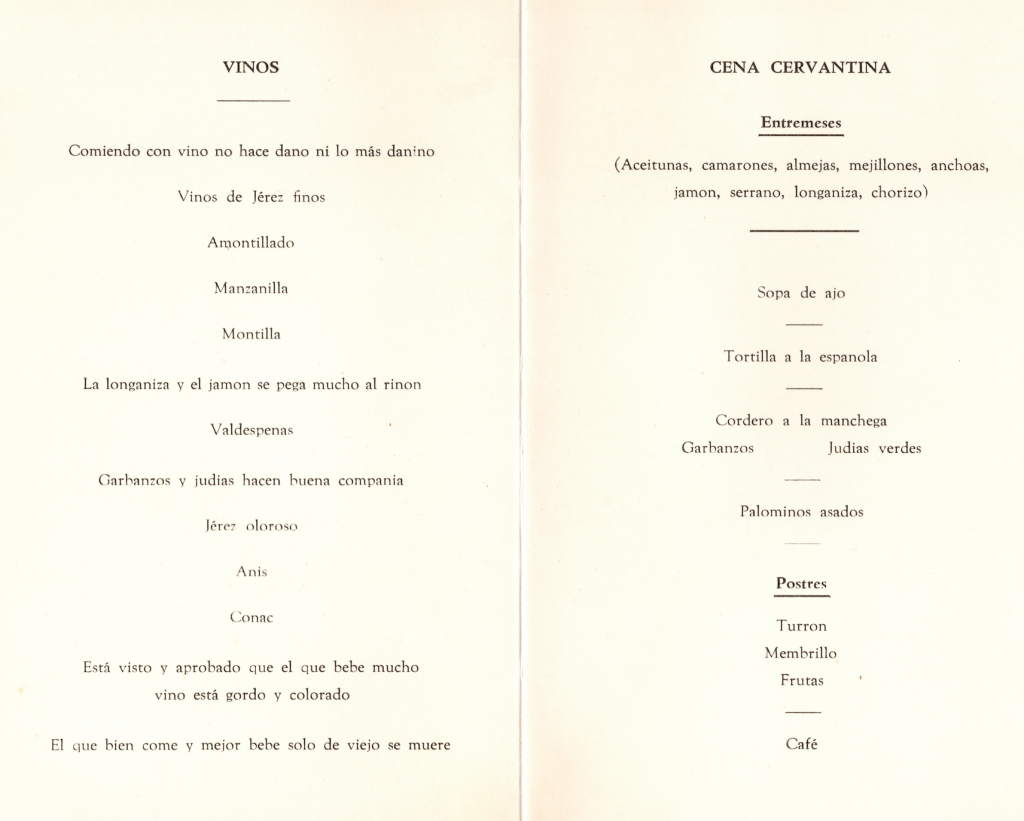 It had begun with sundry shellfish, mountain ham, a variety of sausages and what-not, served at the reception, all calculated to stimulate both hunger and thirst. The Spanish sausage, the sponsor said in a quotation from Tom Wintringham “is made to last, to endure knives, teeth and the ferments of . digestion without yielding”. Perhaps ours were not pure Castillian. There are more pigs in Spain than asses – did the sponsor mention this fact as an assurance that the sausages we had eaten were at any rate pure pig? – and the delicious flavour of the Spanish mountain ham results from placing it in a weak pickle for eight days and then hanging it up in the snow. And so to dinner.

There followed Garlic Soup, a substantial Spanish Omelette with potatoes, Lamb in Manchegan dress with chick-peas and French beans. Spain is called the land of the chick-pea which almost replaces the potato, especially in Castille. Then roast Pigeons. Dessert included almond paste and quince.

On the subject of Spanish wines, Professor Manson displayed an academic wealth of learning. Sherry, the most typical Spanish drink, has a vast range of flavour, dryness or sweetness, from the palest straw colour of the extremely dry finos to the rich dark brown Olorosos, sweet and heavy. Manzanilla is very wholesome, for it strengthens the stomach, without heating like sherry. Montilla is a dry white wine like a very pale sherry but having less alcoholic content.

Valdepenas, drunk with the main courses, rich, full-bodied and high coloured, was the wine of Sancho Panza. It is made – somewhat carelessly – from a Burgundy grape transported to La Mancha.

The sponsor concluded his commentary by translating two Spanish proverbs printed at the foot of the menu. They might be thought to be, like many other wise sayings, somewhat contradictory:

(1) “It is well known that the man who drinks a lot of wine becomes fat and flushed”;

Finally he read from a letter he had received from the Director of the Spanish Institute in London: “Dear Manson, I am beginning to value your autograph very much indeed, for if you go to the Buckland Club and eat the whole of the Cervantes Dinner, you will disappear from this earth and your signature will never be seen again!”

In thanking the sponsor for all his pains and for his great success in arranging a dinner so appropriate to the purposes of the Buckland Club, the Chairman said that the Cervantes Dinner had added colour to the book of Birmingham.

Every so often the AGM minutes reveal an especially historic or memorable aspect of the Club. The minutes below refer to the “aim” of Buckland dinners. It makes for interesting reading, and having attended committee meetings for over twenty years I can assure members that it is a discussion that has been revisited on several occasions.

The current (unofficial) policy is very much that the more dubious, experimental or possibly inedible items are normally restricted to canapés – although this is not always the case. 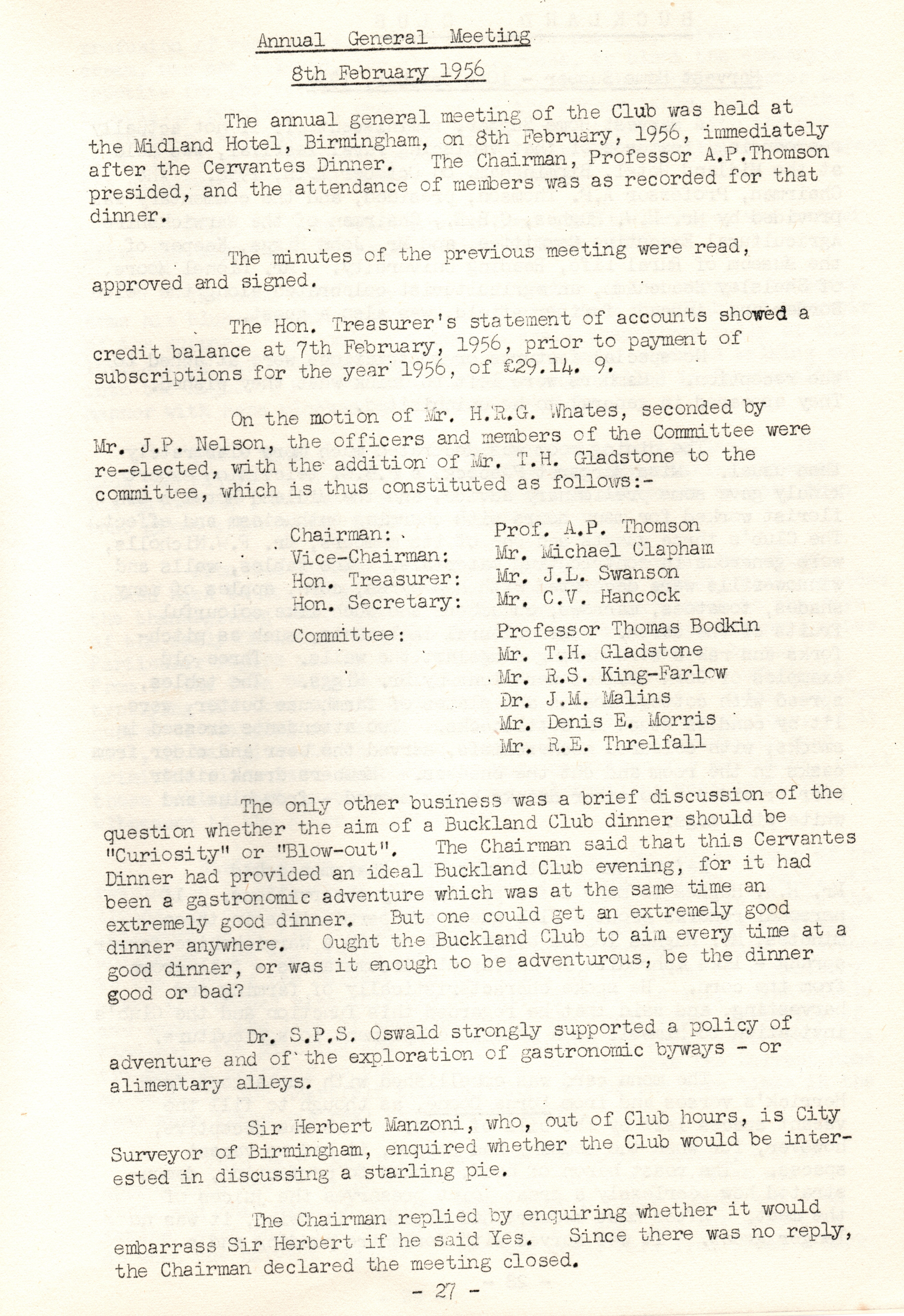