A Harvest Home Supper, reminiscent of, if not actually reproducing, features of that vanishing rural festival, was held at the Midland Hotel, Birmingham, on October 10th, 1956. The Chairman, Professor A..P. Thomson, presided, and the commentary was provided by Mr. H.W. Hughes, C.B.E., Chairman of the Warwickshire Agricultural Executive Committee, and Mr. John Higgs, Keeper of the Museum of Rural Life, Reading University. Mr. Lionel Moore, of Shelsley Beauchamp, an agriculturist celebrated along the Welsh Border and, indeed, further afield, was also a guest.

No Special features or restrictions were attached to the reception. Members were left to drink what they wished. They appeared in general to be uninhibited. 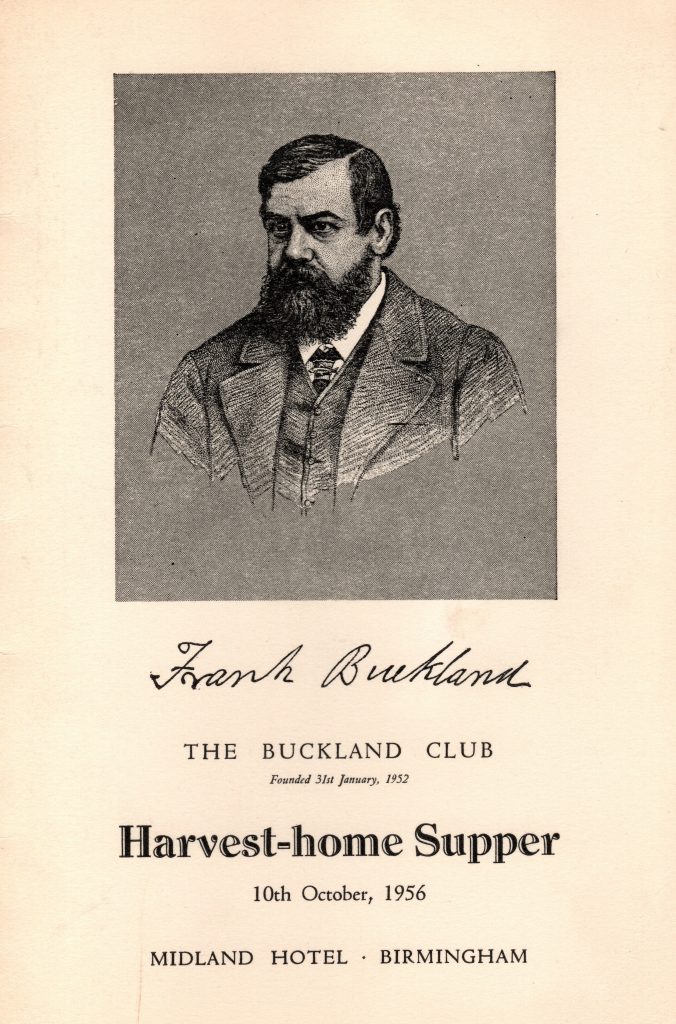 The dining room was decorated much more elaborately than usual. Miss Margaret Peacock, a B.B.C. television expert kindly gave some preliminary advice, and the Midland Hotel’s own florist worked for many hours with charming enthusiasm and effect. The Club’s three guests and one of its members, Mr. F.W. Nicholls, were generous in contributing materials. The tables, walls and window sills were decorated with hop byres, corn, apples of many shades, tomatoes, marrows, cucumbers and such like colourful fruits of the earth. Agricultural implements, such as pitch-forks and rakes were arranged against the walls. Three old examples of Corn Dollies were lent by Mr. Higgs. The tables, spread with cottage loaves and plates of farmhouse butter, were lit by candles stuck in bottlenecks. Two attendants dressed in smocks, with coloured neckerchiefs, served the beer and cider from casks in the room and cut the cheeses. Members drank either beer or cider – no other drinks being served – from blue and white pint mugs. 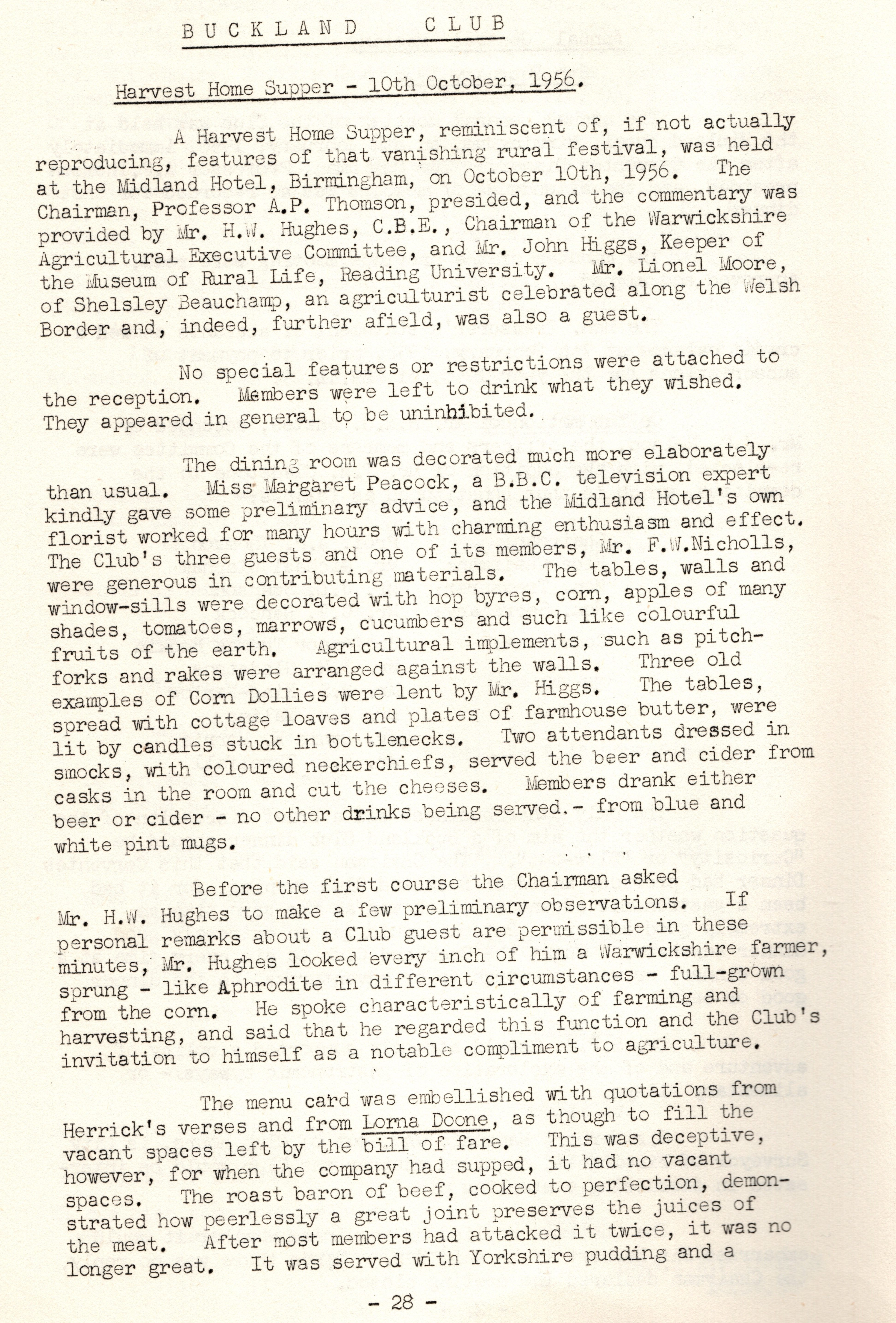 Before the first course the Chairman asked Mr. H.W. Hughes to make a few preliminary observations. If personal remarks about a Club guest are permissible in these minutes, Mr. Hughes looked every inch of him a Warwickshire farmer,

Sprung – like Aphrodite in different circumstances – full~grown from the corn. He spoke characteristically of farming and harvesting, and said that he regarded this function and the Club’s invitation to himself as a notable compliment to agriculture. 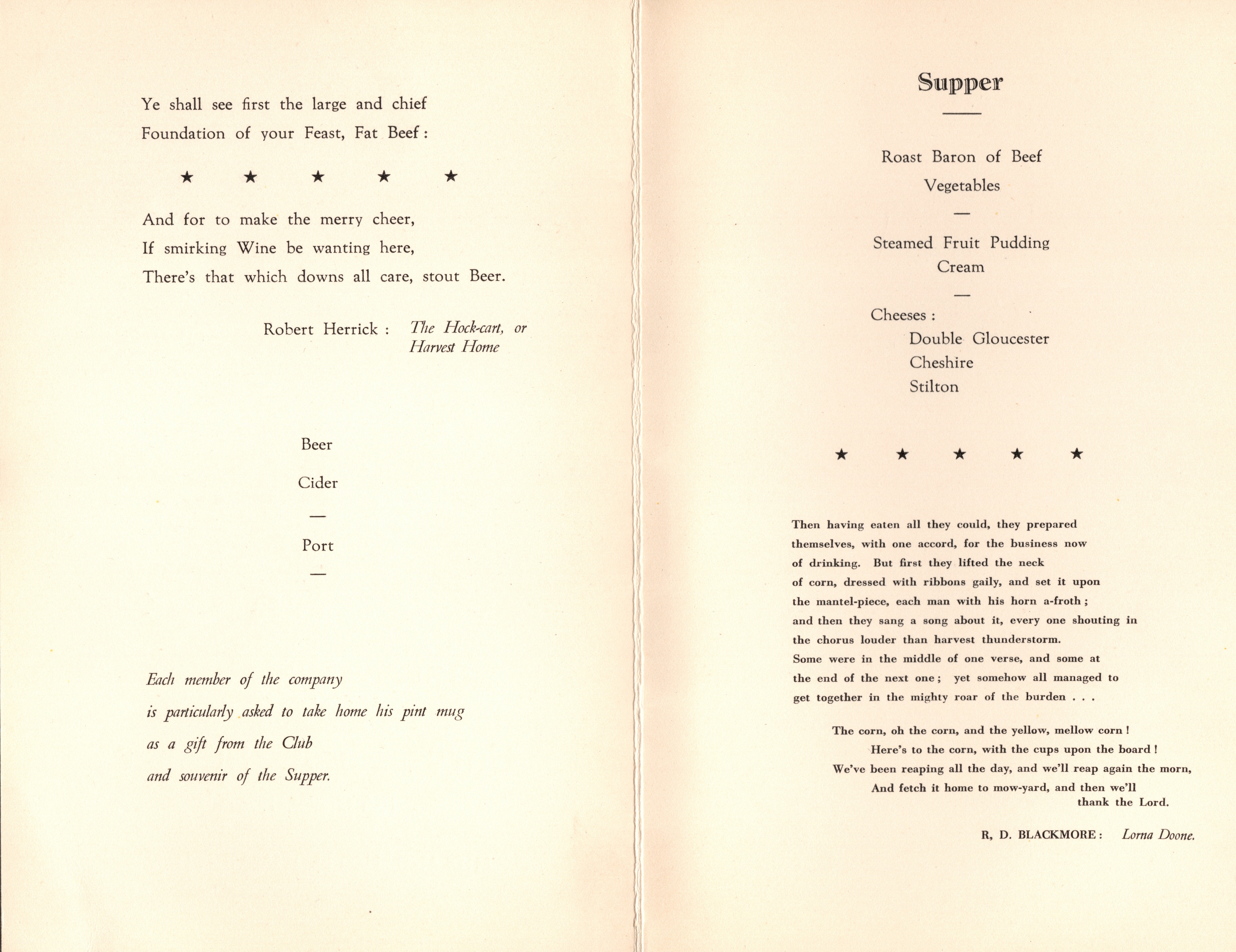 The menu card was embellished with quotations from Herrick’s verses and from Lorna Doone, as though to fill the vacant spaces left by the bill of-fare. This was deceptive, however, for when the company had supped, it had no vacant spaces. The roast baron of beef, cooked to perfection, demonstrated.how peerlessly a great joint preserves the juices of the meat. After most members had attacked it twice, it was no longer great. It was served with Yorkshire pudding and a profusion of vegetables. The mixed fruit pudding, served with cream, was not allowed, for all its virtues, to blunt the company‘s appetite for the various cheeses, among which the Double Gloster (sic) was especially popular. A photograph of the cheese table, with smocked attendants, was inserted in the Minute Book, together with the menu card, for once unfortunately signed by only the majority of the company: the signatures of eight members are missing. 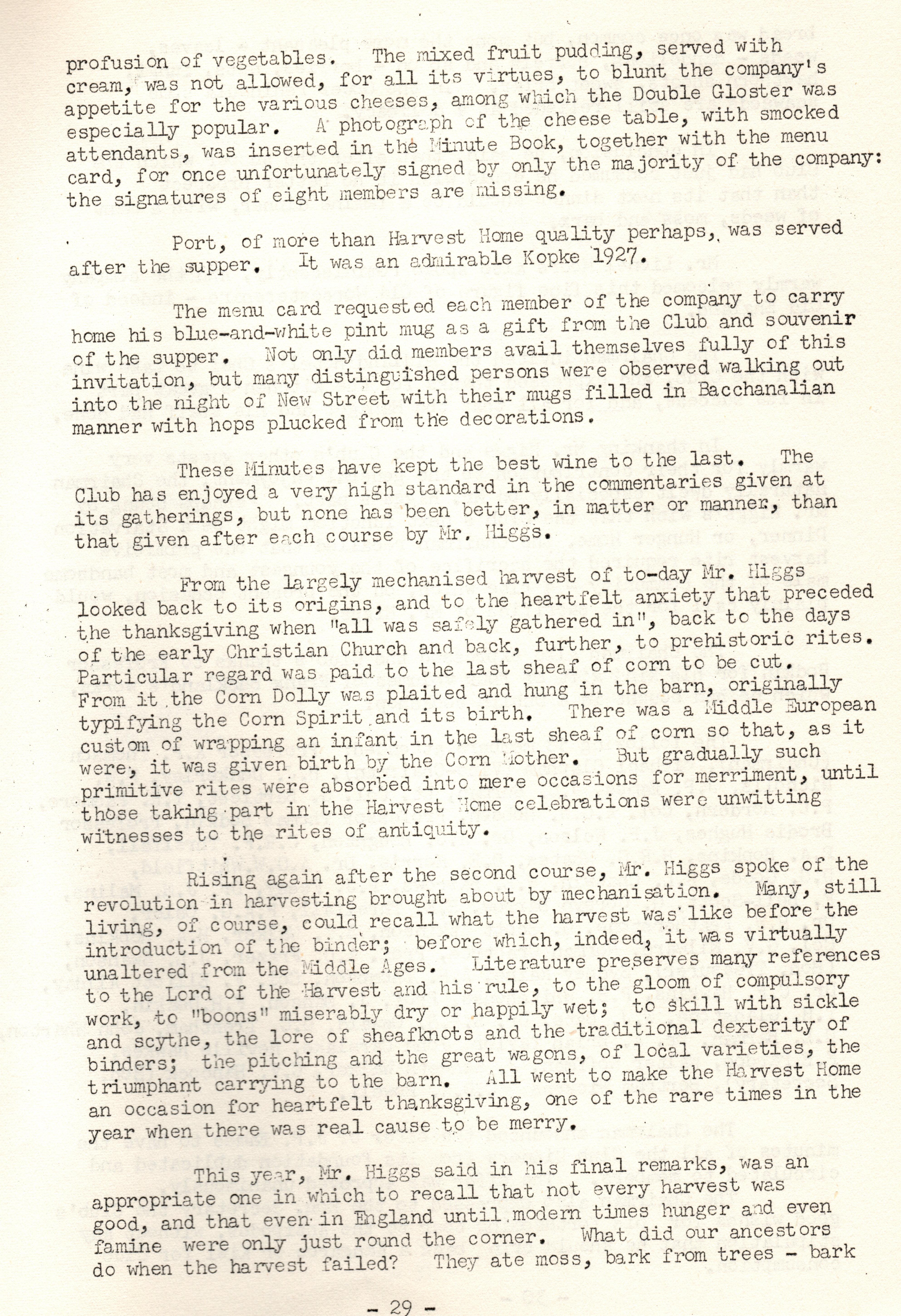 Port, of more than Harvest Home quality perhaps , was served after the supper. It was an admirable Kopke 1927.

The menu card requested each member of the company to carry home his blue-and-white pint mug as a gift from the Club and souvenir of the supper. Not only did members avail themselves fully of this invitation, but many distinguished persons were observed walking out into the night of “New Street with their mugs filled in Bacchanalian manner with hops plucked from the decorations .

These Minutes have kept the best wine to the last. The Club has enjoyed a very high standard in the commentaries given at its gatherings, but none has been better, in matter or manner, than that given after each course by Mr. Higgs.

From the largely mechanised harvest of today Mr. Higgs looked back to its origins, and to the heartfelt anxiety that preceded the thanksgiving when ”all was safely gathered in“, back to the days of the early Christian Church and back, further, to prehistoric rites. Particular regard was paid to the last sheaf of corn to be cut. From it, the Corn Dolly was plaited and hung in the barn, originally typifying the Corn Spirit and its birth. There was a Middle European custom of wrapping an infant in the last sheaf of corn so that, as it were, it was given birth by the Corn Mother. But gradually such primitive rites were absorbed into mere occasions for merriment , until those taking part in the Harvest Home celebrations were unwitting witnesses to the rites of antiquity.

Rising again after the second course, Mr. Higgs spoke of the revolution in harvesting brought about by mechanisation. Many, still living, of course, could recall what the harvest was like before the introduction of the binder; before which, indeed, it was virtually unaltered from the Middle Ages. Literature preserves many references to the Lord of the Harvest and his rule, to the gloom of compulsory work, to “boons” miserably dry or happily wet; to skill with sickle and scythe, the lore of sheafknots and the traditional dexterity of binders; the pitching and the great wagons, of local varieties, the triumphant carrying to the barn. All went to make the Harvest Home an occasion for heartfelt thanksgiving, one of the rare times in the year when there was real cause to be merry.

This year, Hr. Higgs said in his final remarks, was an appropriate one in which to recall that not every harvest was good, and that even in England until, modern times hunger and even famine were only just round the corner. What did our ancestors do when the harvest failed? They ate moss, bark from trees – bark bread was once common, but none the more pleasant – leaves, weeds – dandelions, sorrels and so on – berries, nuts, fungi, hawthorn shoots, sweet briar. In the Gower Peninsula some seaweeds are still relished as a delicacy. 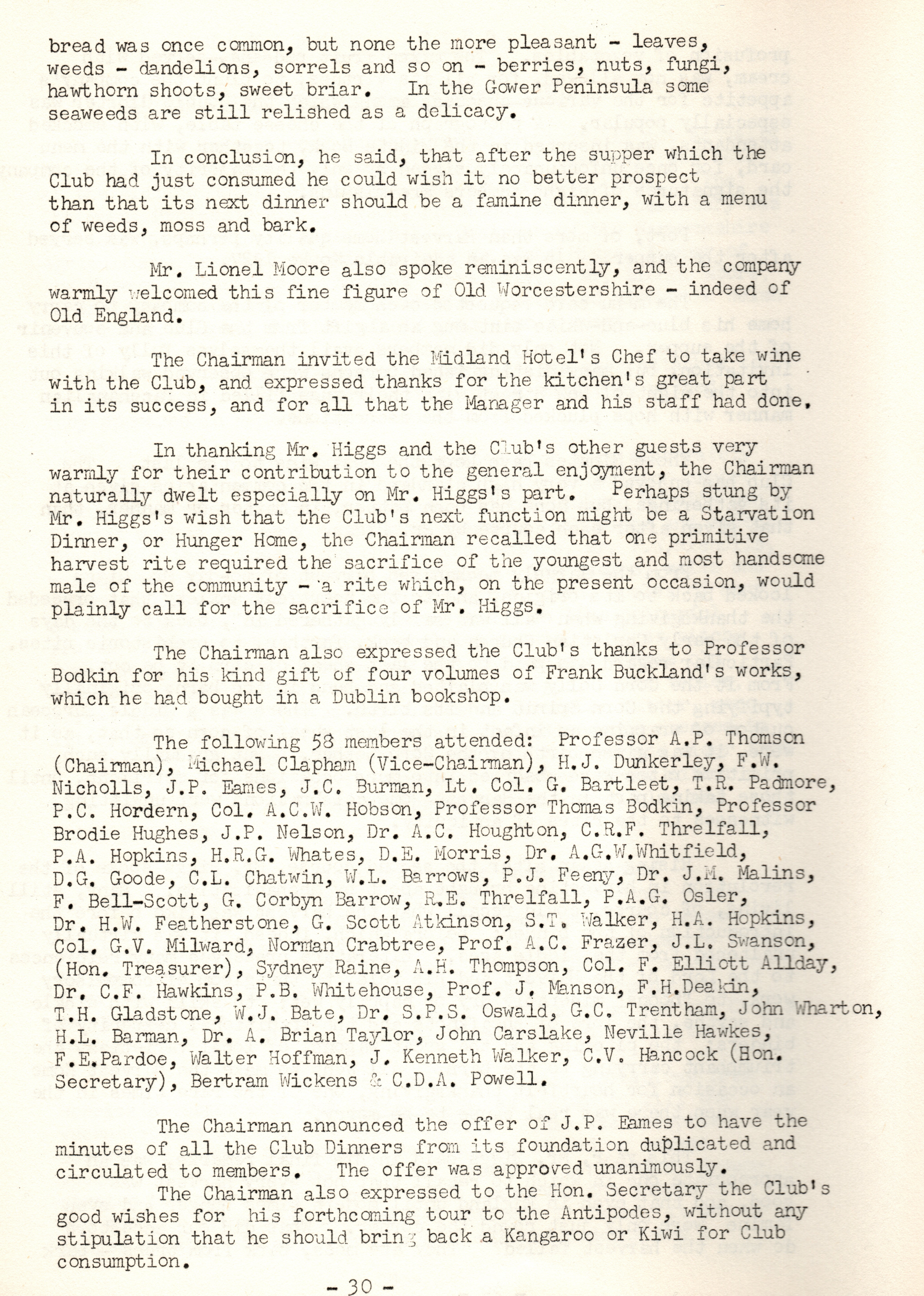 In conclusion, he said, that after the supper which the Club had just consumed he could wish it no better prospect than that its next dinner should be a famine dinner, with a menu of weeds, moss and bark.

The Chairman invited the Midland Hotel’s Chef to take wine with the Club, and expressed thanks for the kitchen’ s great part in its success, and for all that the Manager and his staff had done.

In thanking Mr. Higgs and the Club’s other guests very warmly for their contribution to the general enjoyment, the Chairman naturally dwelt especially on Mr. Higgs’ s part. Perhaps stung by Mr. Higgs’s wish that the Club’s next function might be a Starvation Dinner, or Hunger Home, the Chairman recalled that one primitive harvest rite required the sacrifice of the youngest and most handsome male of the community – a rite which, on the present occasion, would plainly call for the sacrifice of Mr. Higgs.

The Chairman also expressed the Club’s thanks to Professor Bodkin for his kind gift of four volumes of Frank Buckland’ s works, which he had bought in a Dublin bookshop. 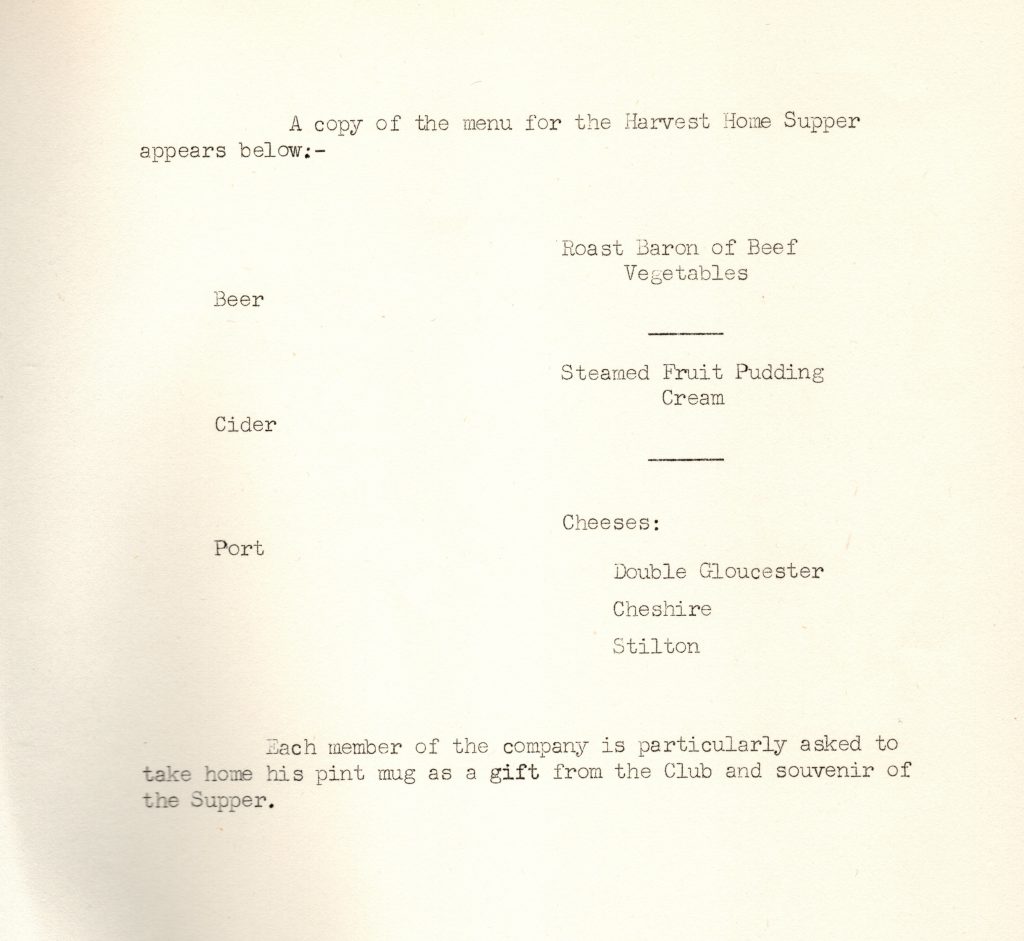