A Charentais dinner was held at the Midland Hotel, Birmingham, on 27th February, 1957, sponsored by Dr. F.G. Healey of the Department of French, Birmingham University. The Chairman, Professor A.P. Thomson, presided. An apology was received from Monsieur G. de Coulhac, Consul for France, who had been invited as the Club’s guest but was unfortunately unable to attend.

Among the members arriving for the reception, the majority was probably in some doubt about the gastronomic significance of the Charente. They encountered an agreeable but unfamiliar aperitif, the Pineau des Charentes. One glass of it leading easily to another, the Club went in to dine with quiet confidence in the future. The sponsor then explained that the Pineau was a sweet white wine whose fermentation was cut with brandy at the appropriate moment; and he warned members that it was considerably more alcoholic than it tasted. The Club received the warning without noticeable dismay. 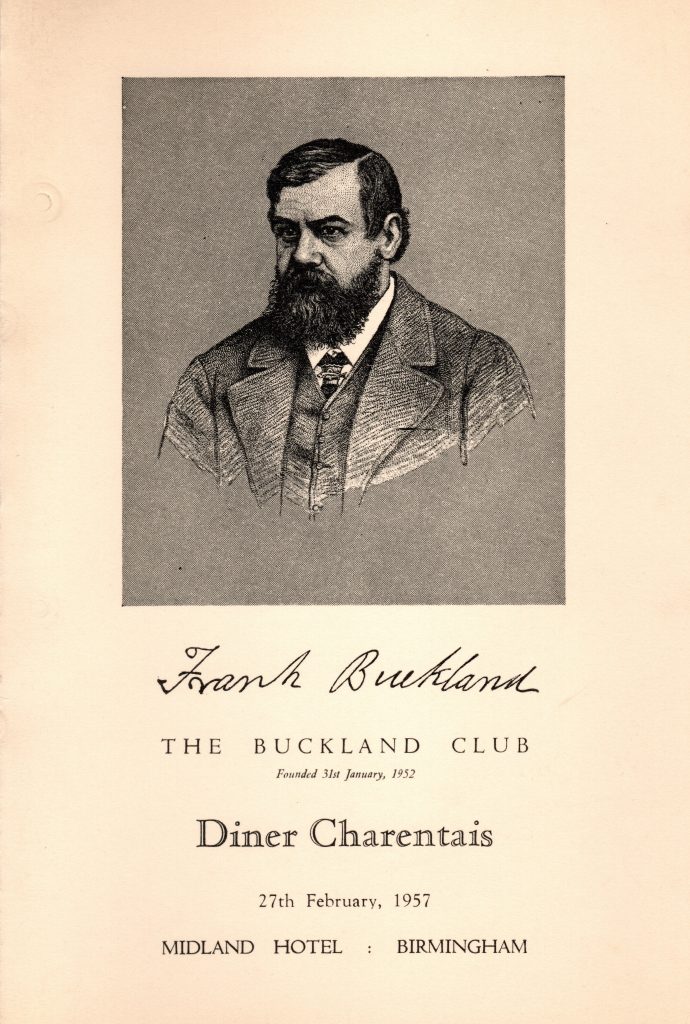 The Marenne oysters, served with cubes of garlic sausage, having appeared as the first of eight courses on the menu and disappeared agreeably, the sponsor rose to speak of the district which had inspired his choice. The departments of Charente and Charente Maritime in south-western France extended from La Rochelle to the Gironde estuary, thus including some wine entitled to be called Bordeaux – which at this stage members were drinking in its white form. The departments had formed part of the kingdom of Aquitaine, and thus part of the domain of the English crown in the Middle Ages: the connection was still remembered there. Inland, the country was largely given to dairying, and was rich in butter and cream. On the coast, shell-fish were the main gastronomic attraction: hence their prominent place in the menu. 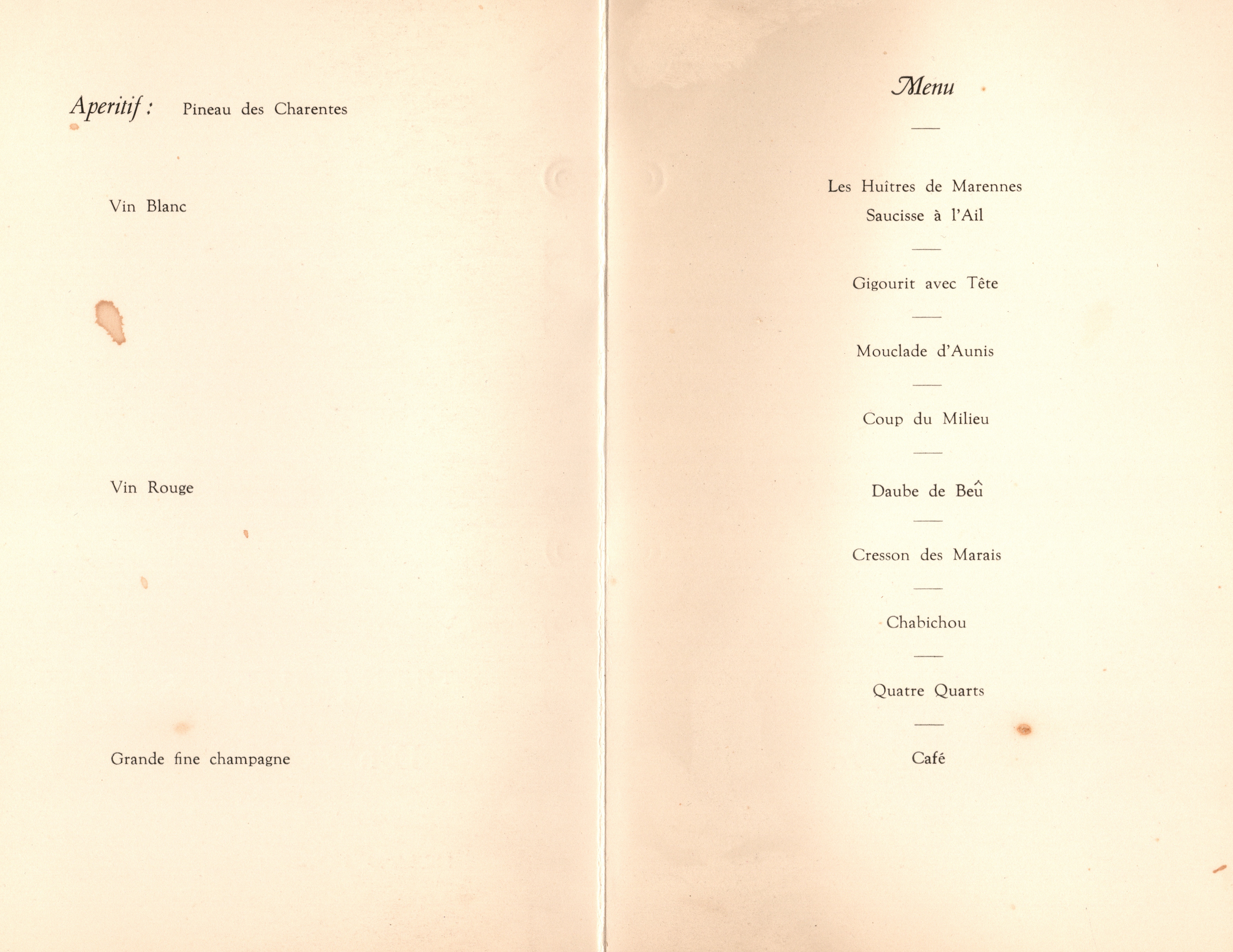 Members having tackled the Gigourit, a hot pâté made from pig’s head and rind whose excellent flavour belied its economical provenance, the sponsor spoke of the wines. They were, he explained, white and red vins ordinaires of Bordeaux, since most wine made in the Charente, particularly those made near Cognac, went into the still to produce brandy – some of which went into almost every Charentais dish. Members were then offered the Mouclade, a dish of mussels cooked in sea water with a sauce of the sea water with white wine, garlic and a little brandy. They ate it manfully as instructed, using one shell as a scoop. 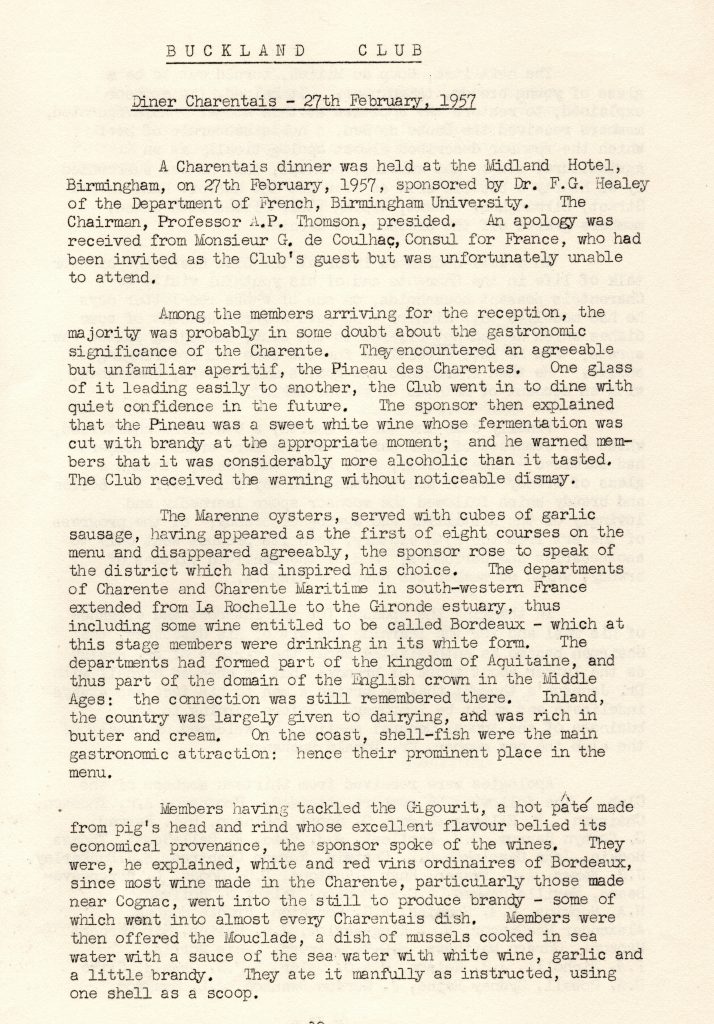 The next item, Coup du Milieu, turned out to be a glass of young brandy, taken neat. It helped, the sponsor explained, to restore the appetite at this stage. Reinvigorated, members received the Daube de Beu, a noble casserole of beef which the Sponsor described almost apologetically as an agricultural dish; not knowing, perhaps, that he was surrounded by as hearty a bucolic crew as ever got the harvest home in New Street, Birmingham. Next, wiping their plates with bread, members grazed off the Cresson des Marais.

In a well-nourished interval the Club heard the sponsor talk of life in the Charente and of his youthful visits to Charentais peasant households, on one of whose red-letter days he had modelled this dinner. He gave a lurid account of some dishes which he had not offered to the Club, including salted raw sprats; and he gave directions for the care and up-bringing of snails. He then introduced the goat’s milk cheese, Chabichou, with an account of methods of cheese-making.

Finally came the Quatre Quarts, a beatified shortbread, which was composed of four parts – as the more erudite members had surmised – namely flour, fat, sugar and yeast; though a glass of brandy had of course found its way in. Over the coffee and brandy which followed the sponsor spoke learnedly and lovingly of the distilling and ageing of brandy; of the progress of the art from the 15th century, when its product went only to apothecaries and perfumers; and of the manifold virtues of brandy, which no member was heard to dispute.

In thanking the sponsor for the interest and elegance of his meal and for the learning and wit of his discourse, the Chairman became as enthusiastic about the virtues of Dr. Healey as the latter about those of brandy: but he checked himself with Dr. Johnson’s thought that to praise a man to his face was always indelicate and might be improper. Before turning to the business of the Annual General meeting, he welcomed on behalf of the club the new member, Mr. Donald Buchanan. 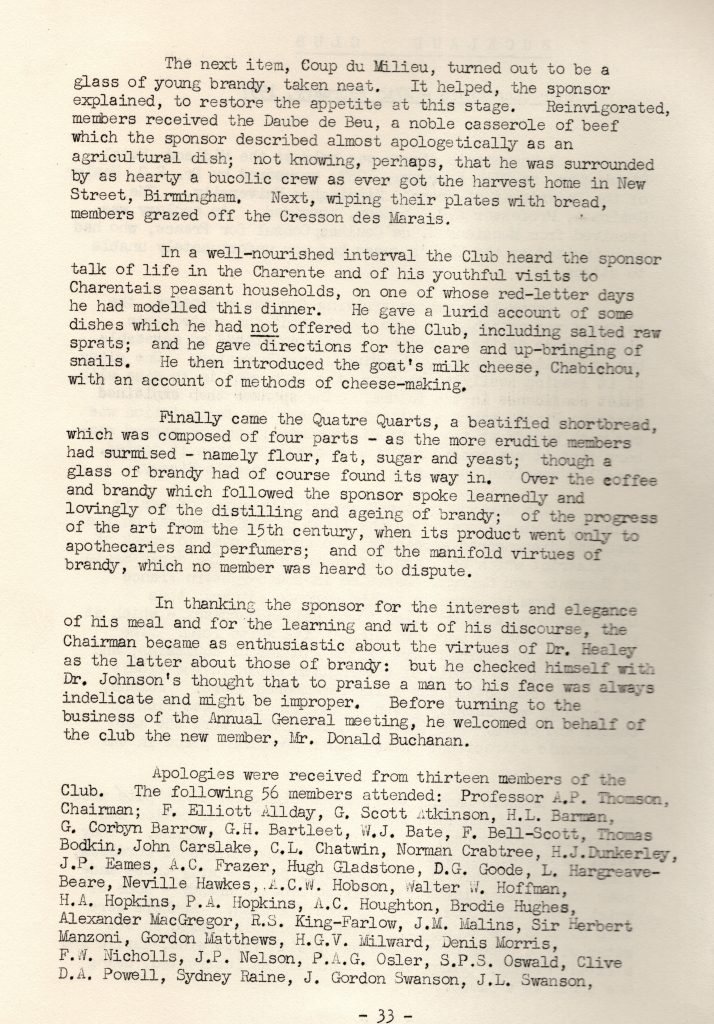 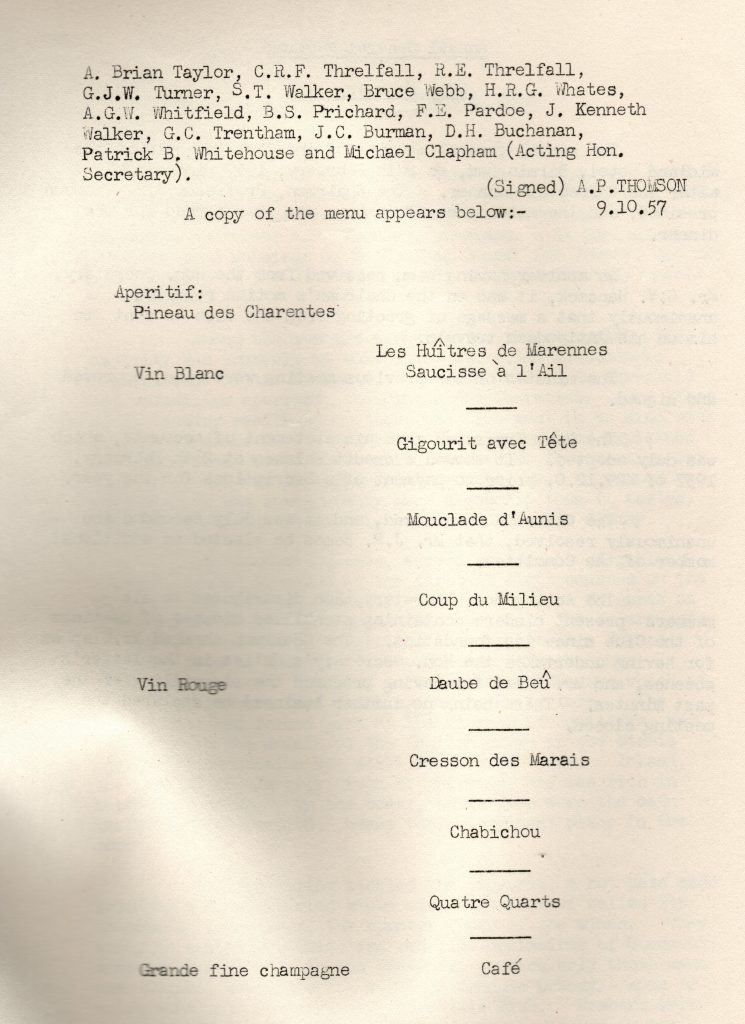