Sponsor: Professor A. B. MacGregor

Minutes of the Australian Dinner

Having drunk the wines of South Africa at the Frank Buckland Memorial Dinner, the Club thought it would be a good idea to hold an Australian Dinner. A hint of this thought was allowed to reach His Excellency the High Commissioner‘s Office. The response of Australia House was no less ready and generous than that of South Africa House. All the wines drunk at the recaption and dinner, as well as the brandy, were Australian – and Australia’s gift to the Club. The Culinary Adviser at Australia House sent full advice on the choice and preparation of the menu.

The Club’s guests were Mr. P. R. Searcy, Senior Trade Commissioner, Australia House, representing the High Commissioner; Sir Raymond Priestley, who was Vice-Chancellor of Melbourne University before becoming Vice-Chancellor of the University of Birmingham 1938-52; and Mr. W. C. Gissane, Surgeon-in-Chief of Birmingham Accident Hospital since its foundation, a native of Sydney.

The Chairman presided, and the sponsor was Professor A. B. MacGregor, Professor of Dental Surgery in Birmingham University and a member of the Club. 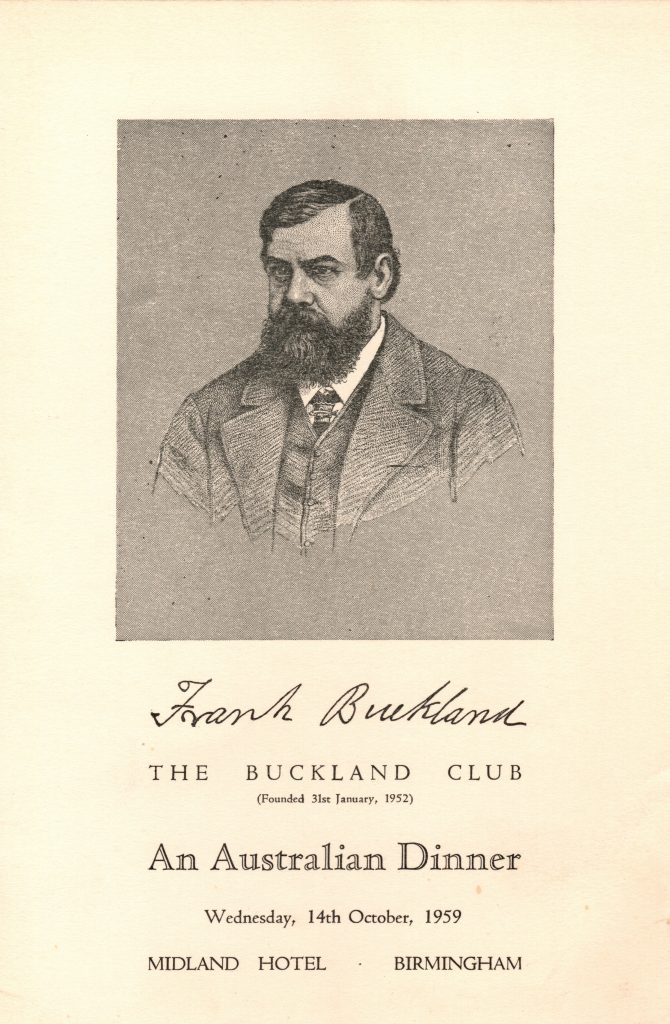 Ordinary cocktails were served at the reception – or Spanish sherry – but a glass of Australian Extra Dry Solero awaited members as they took their place s at the table. “You‘d never think it was Australian,” one member commented.‘ 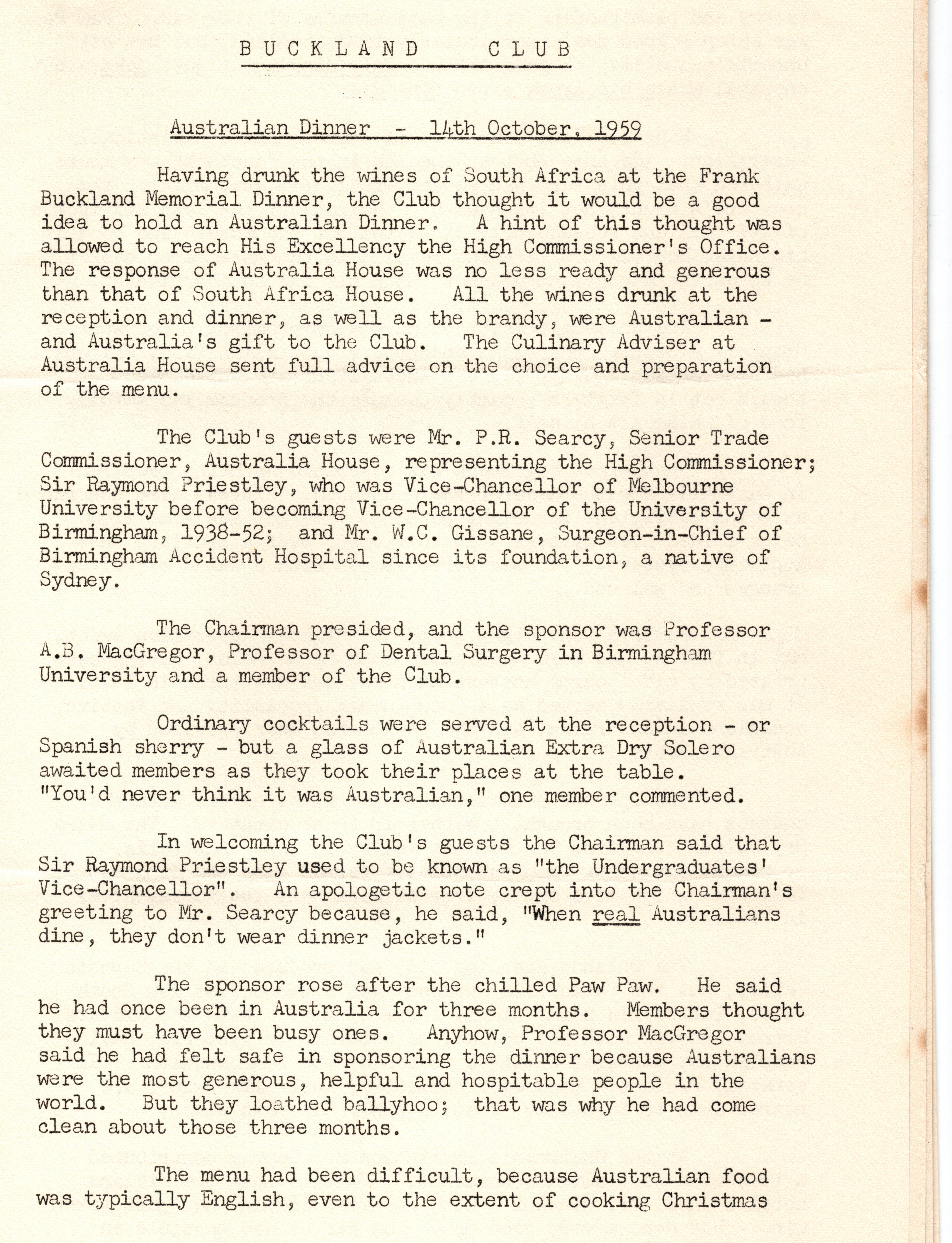 In welcoming the Club’s guests the Chaiman said that Sir Raymond Priestley used to be known as “the Undergraduates’ Vice-Chancellor”. An apologetic note crept into the Chairman’s greeting to Mr. Searcy because, he said, “When real Australians dine, they don’t wear dinner jackets ”

The sponsor rose after the Chilled Paw Paw. He said he had once been in Australia for three months. Members thought they must have been busy ones. Anyhow, Professor MacGregor said he had felt safe in sponsoring the dinner be cause Australians were the most generous, helpful and hospitable people in the world. But they loathed ballyhoo; that was why he had come clean about those three months.

The menu had been difficult, because Australian food was typically English, even to the extent of cooking Christmas turkey and plum pudding at the hottest time of the year. Paw Paw was eaten a good deal, particularly in Queensland, but was of uncertain quality: a good one was fair dinkum, or just jake; but one that was a bit crook often ponged. 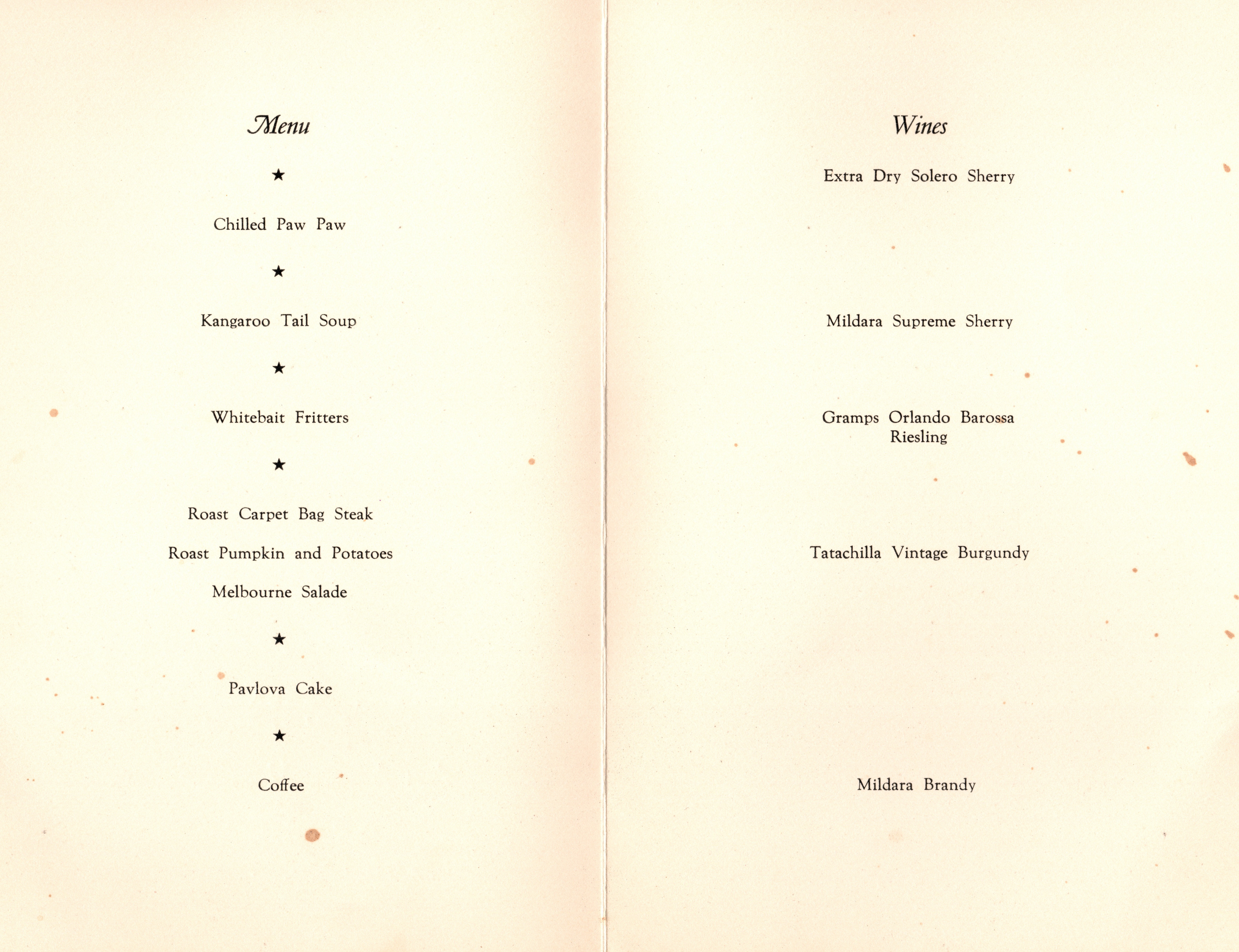 Kangaroo Tail Soup was, of course, characteristically Australian. He once shot a kangaroo in the “outback” – members gathered that this term was geographical, not anatomical: the creature’s haunt, not its haunch. He cut off the last six inches of its tail and subsequently dissected out the muscle and bone in his hotel bedroom and left the remains in the wastepaper basket. He hoped the management had not taken him for an abortionist.

The Carpet Bag Steak was described as being prepared in Australia for the Head of the Household. It was also described as being sufficient for eight persons. It got its name from being folded over oysters – in this case, over a stuffing that contained oysters. It was served to us with a salad of chives, oranges and walnuts.

Pavlova Cake might sound an unlikely Australian sweet, but in fact it was more Australian than Peche Melba, having been created by a Melbourne hostess when Pavlova was there in 1926. It was regularly served as a ”down-under speciality“ on festive occasions in Australia, and the recipe had been provided by Australia House. 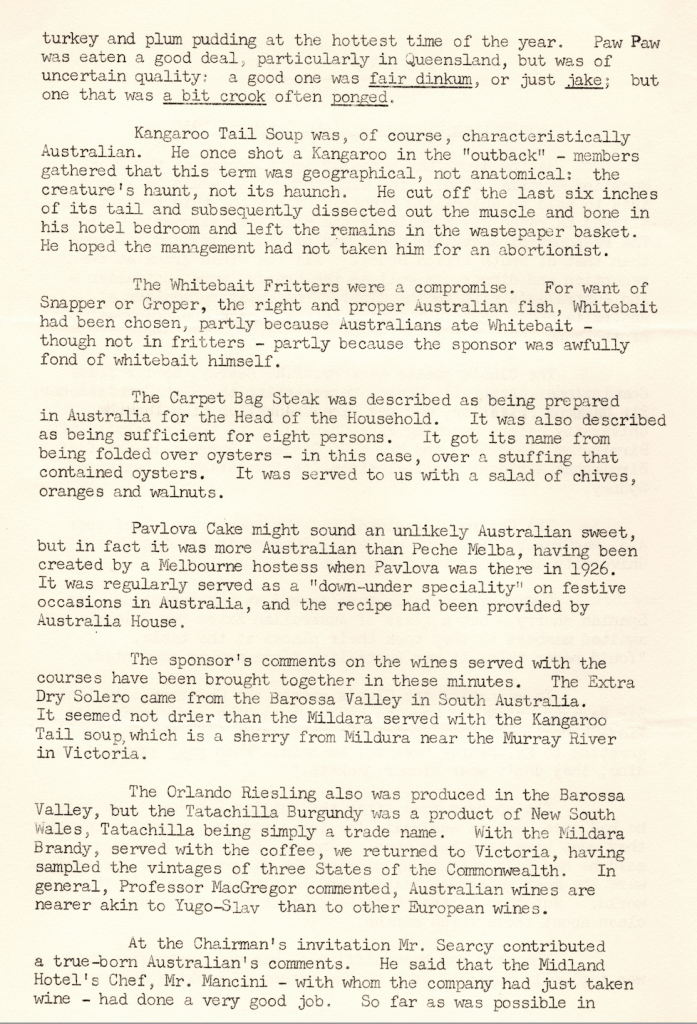 The sponsor’s comments on the wines served with the courses have been brought together in these minutes. The Extra Dry Solero came from the Barossa Valley in South Australia. It seemed not drier than the Mildara served with the Kangaroo Tail Soup, which is a sherry from Mildura near the Murray River in Victoria.

The Orlando Riesling also was produced in the Barossa Valley, but the Tatachilla Burgundy was a product of New South Wales, Tatachilla being simply a trade name. With the Mildara Brandy, served with the coffee, we returned to Victoria, having sampled the vintages of three States of the Commonwealth. In general, Professor MacGregor commented, Australian wines are nearer akin to Yugo—Slav than to other European wines.

At the Chairman’s invitation Mr. Searcy contributed a true-born Australian’s comments. He said that the Midland Hotel’s Chef, Mr. Mancini – with whom the company had just taken wine – had done a very good job. So far as was possible in England, the dinner had been authentic. Maybe Australia House might have had a little more courage in its suggestions; it had drawn the line at certain grubs and snakes, although, to judge from the Club’s record, that caution might have been needless.

In compliment to the Chef, Mr. Searcy said that he had never enjoyed Kangaroo Tail Soup – until that night. Possibly it would have been more Australian to serve the whitebait without the fritter or vice versa.

There were lot s of misconceptions in this country about Australian wines – and not a single bottle at the Dorchester. No wonder Australia House got complaints from Australians over here and from Englishmen home from Australia. But of a total production of 15 million gallons of Australian wine, 13 million gallons were drunk at home, and consumption there increased faster than production. Still, the wines served at that dinner were available commercially in England, though not in large supply. The sherries – “a contentious wine ” – were representative the Mildara being in short supply in Australia . The Riesling had actually won a gold medal in Yugo-Slavia, and the Tatachilla Burgundy was some thing of which Australia was quite proud.

A very handsome copper Coat of Arms of Australia was lent by Australia House to decorate the room.

The dinner was attended by a Koala and a Wallaby, both stuffed, and by the following fifty members… 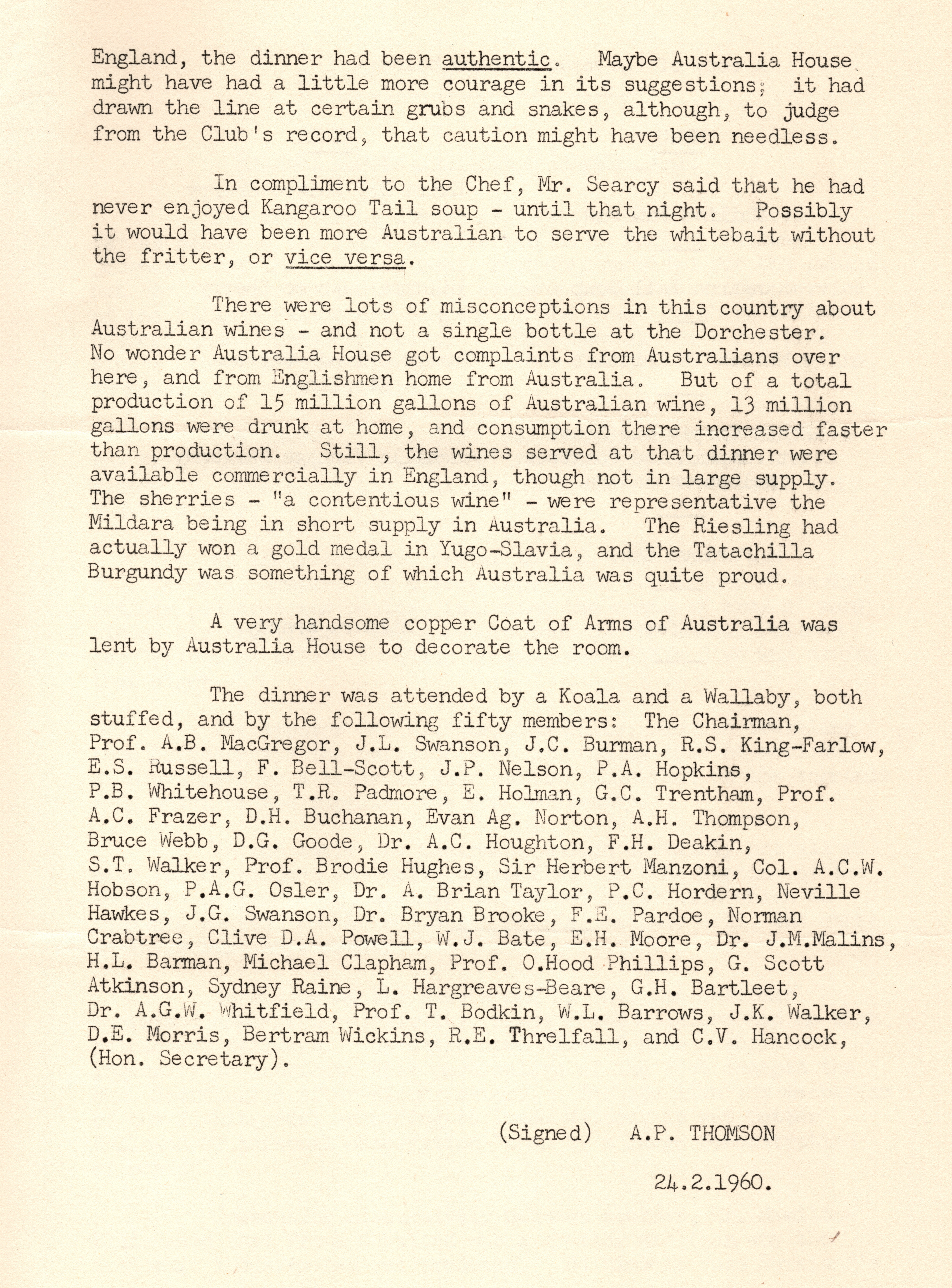