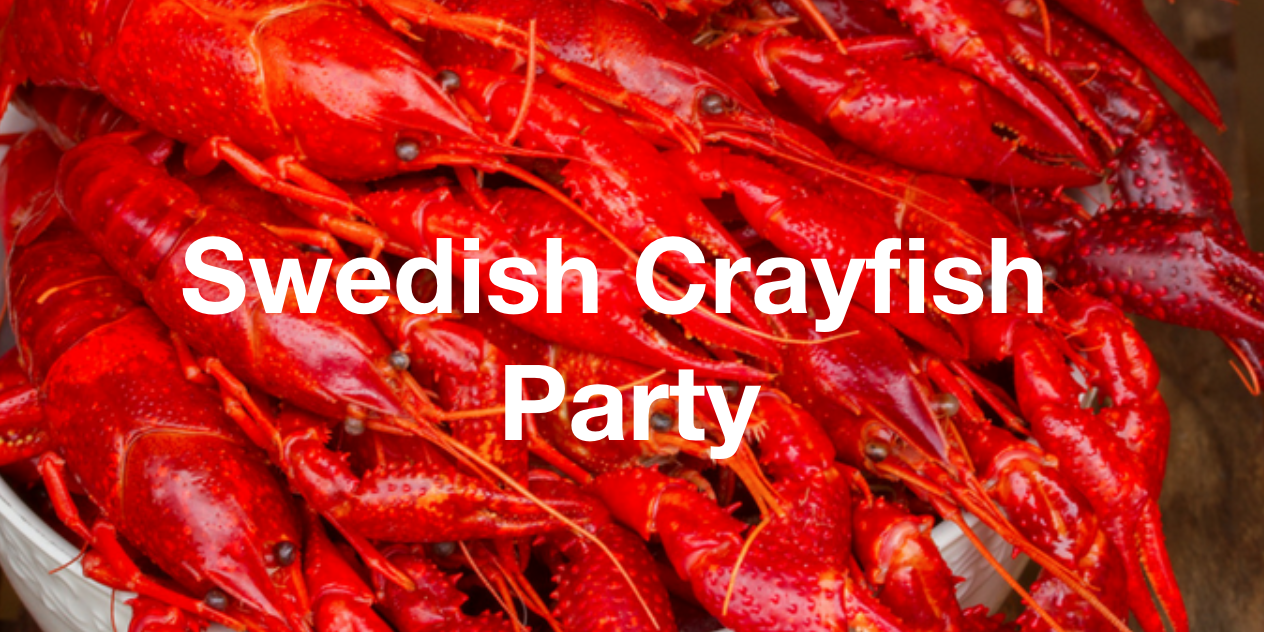 Minutes of A Swedish Crayfish Party

The first dinner of the Club after it had been duly inaugurated was the Swedish Dinner in 1952, sponsored with scrupulous attention to details by Professor A.C. Frazer. The minutes of that evening conclude: ‘By universal consent this Swedish dinner had set the Buckland Club firmly on its legs – if that is what a supremely good dinner ever does”.

On October 12th, 1960, the Club returned to Sweden in spirit and Schnapps, and again with Professor Frazer as guide, for a Crayfish Party. True, We arrived late, for this great event of the Swedish social round belongs properly to August. 58 members were present. 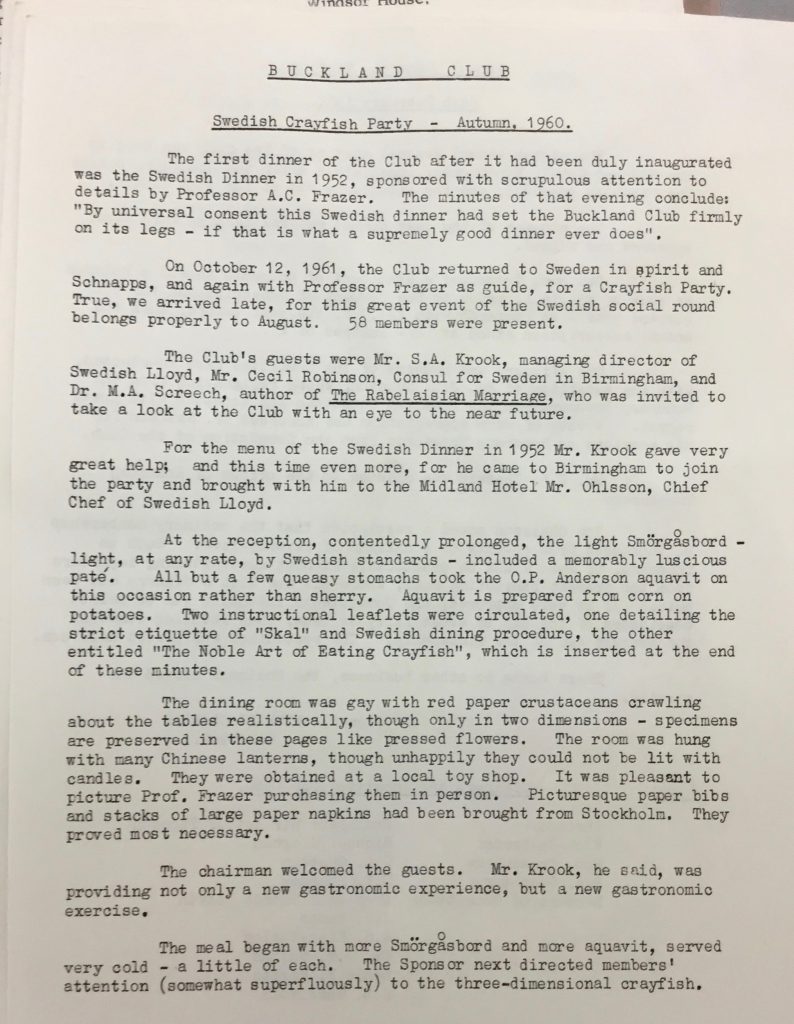 The Club’s guests were Mr. S.A. Krook, managing director of Swedish Lloyd, Mr. Cecil Robinson, Consul for Sweden in Birmingham, and Dr. M.A. Screech, author of The Rabelaisian Marriage, who was invited to take a look at the Club with an eye to the near future.

For the menu of the Swedish Dinner in 1952 Mr. Krook gave very great help; and this time even more, for he came to Birmingham to join the party and brought with him to the Midland Hotel Mr. Ohlsson, Chief Chef of Swedish Lloyd.

At the reception, contentedly prolonged, the light Smörgåsbord – light, at any rate, by Swedish standards – included a memorably luscious paté. All but a few queasy stomachs took the 0.P. Anderson aquavit on this occasion rather than sherry. Aquavit is prepared from corn on potatoes. Two instructional leaflets were circulated, one detailing the strict etiquette of “Skal” and Swedish dining procedure, the other entitled “The Noble Art of Eating Crayfish”, which is inserted at the end of these minutes.

The dining room was gay with red paper crustaceans crawling about the tables realistically, though only in two dimensions – specimens are preserved in these pages like pressed flowers. The room was hung with many Chinese lanterns, though unhappily they could not be lit with candles. They were obtained at a local toy shop. It was pleasant to picture Prof. Frazer purchasing them in person. Picturesque paper bibs and stacks of large paper napkins had been brought from Stockholm. They proved most necessary.

The meal began with more Smörgåsbord and more aquavit, served very cold – a little of each. The Sponsor next directed members’ attention (somewhat superfluously) to the three-dimensional crayfish.

There were 1,000 or more of them, heaped on dishes in pyramids. They had been netted in fresh water in Sweden in August, deep-frozen there and put on board the Swedish Lloyd ship at Gothenburg three days ago. From Tilbury they were vanned to Birmingham. Thanks to Mr. Krook, their whole journey from Sweden and their preparation for our table had been under the eye of Mr. Ohlsson. 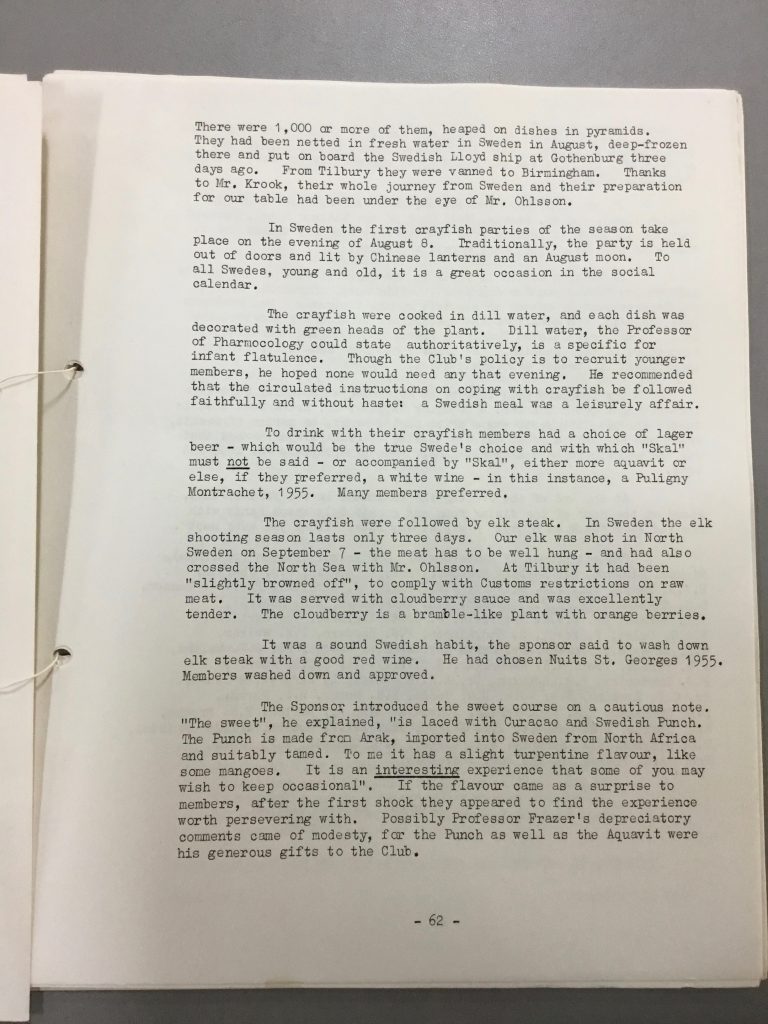 In Sweden the first crayfish parties of the season take place on the evening of August 8. Traditionally, the party is held out of doors and lit by Chinese lanterns and an August moon. To all Swedes, young and old, it is a great occasion in the social calendar.

The crayfish.were cooked in dill water, and each dish was decorated with green heads of the plant. Dill water, the Professor of Pharmocology could state authoritatively, is a specific for infant flatulence. Though the Club’s policy is to recruit younger members, he hoped none would need any that evening. He recommended that the circulated instructions on coping with crayfish be followed faithfully and without haste: a Swedish meal was a leisurely affair. 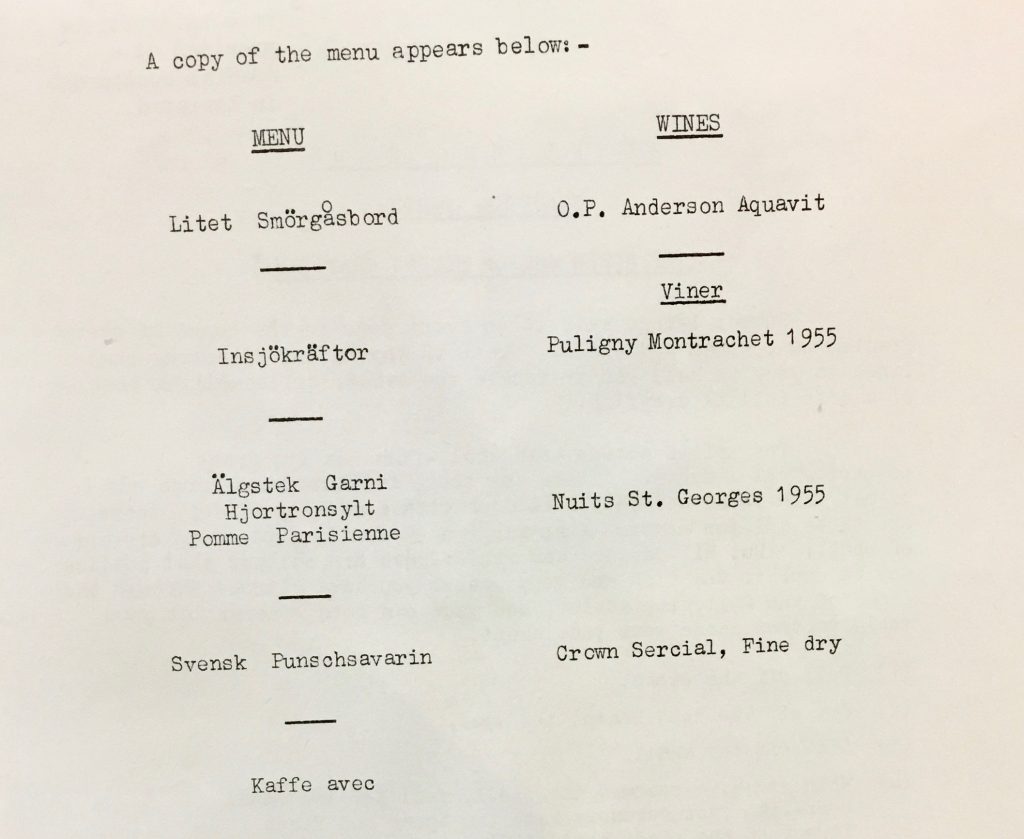 To drink with their crayfish members had a choice of lager beer – which would be the true Swede‘s choice and with which “Skal” must not be said – or accompanied by ”Skal”, either more aquavit or else, if they preferred, a white’wine – in this instance, a Puligny Montrachet, 1955. Many members preferred.

The crayfish were followed by elk steak. In Sweden the elk shooting season lasts only three days. Our elk was shot in North Sweden on September 7 — the meat has to be well hung – and had also crossed the North Sea with Mr. Ohlsson. At Tilbury it had been “slightly browned off”, to comply with Customs restrictions on raw meat. It was served with cloudberry sauce and was excellently tender. The cloudberry is a bramble-like plant with orange berries.

It was a sound Swedish habit, the sponsor said to wash down elk steak with a good red wine. He had chosen Nuits St. Georges 1955. Members washed down and approved.

The Sponsor introduced the sweet course on a cautious note. “The sweet”, he explained, “is laced with Curacao and Swedish Punch. The Punch is made from Arak, imported into Sweden from North Africa and suitably tamed. To me it has a slight turpentine flavour, like some mangoes. It is an interesting experience that some of you may wish to keep occasional”. If the flavour came as a surprise to members, after the first shock they appeared to find. the experience worth persevering with. Possibly Professor Frazer’s depreciatory comments came of modesty, for the Punch as well as the Aquavit were his generous gifts to the Club.

With the sweet we drank a dry Madeira, though port would have been equally in order. With the coffee, cognac or any liqueur was permissible, but this was particularly an opportunity to taste Swedish Punch as a liqueur. At the Chairman’s invitation, Mr. Ohlsson, Chief Chef of Swedish Lloyd, and Mr. Mackie, Head Chef of the Midland Hotel, entered together in order to receive from him the Club’s hearty thanks and to take wine with us. They were warmly applauded. 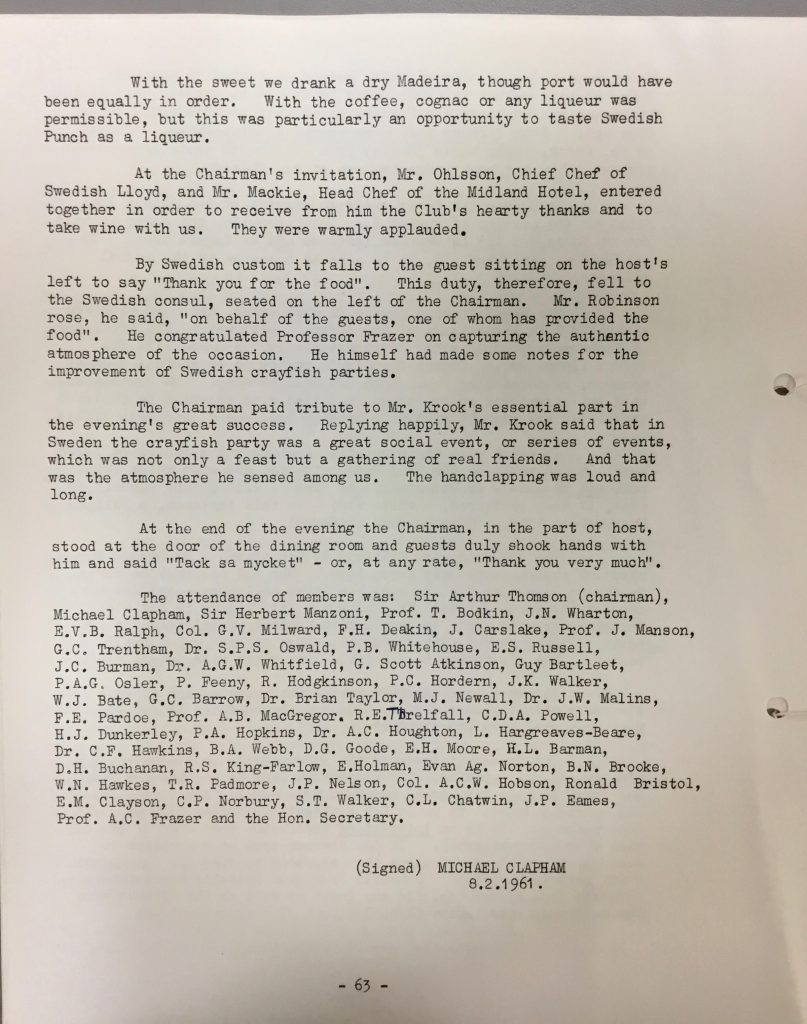 By Swedish custom it falls to the guest sitting on the host‘s left to say “Thank you for the food”. This duty, therefore, fell to the Swedish consul, seated on the left of the Chairman. Mr. Robinson rose, he said, “on behalf of the guests, one of whom has provided the food”. He congratulated Professor Frazer on capturing the authentic atmosphere of the occasion. He himself had made some notes for the improvement of Swedish crayfish parties.

The Chairman paid tribute to Mr. Krook’s essential part in the evening’s great success. Replying happily, Mr. Krook said that in Sweden the crayfish party was a great social event, or series of events, which was not only a feast but a gathering of real friends. And that was the atmosphere he sensed among us. The handclapping was loud and long.

At the end of the evening the Chairman, in the part of host, stood at the door of the dining room and guests duly shook hands with him and said “Tack sa mycket” – or, at any rate, “Thank you very much”. 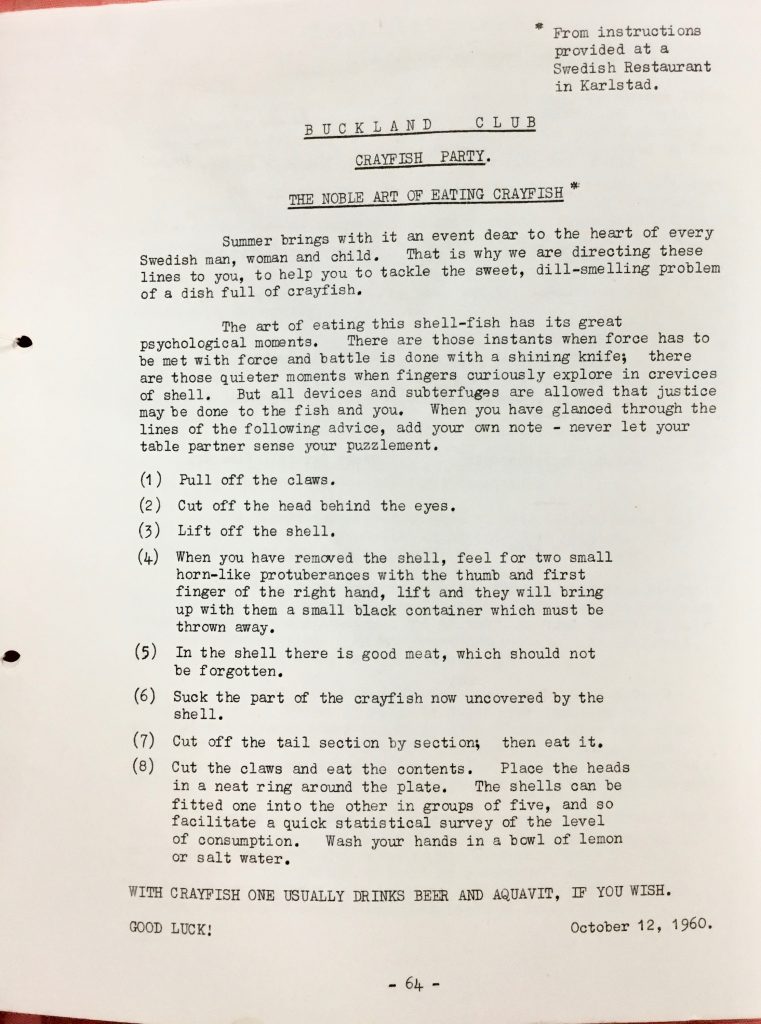