Minutes of the Rabelaisian Dinner

The standard established by the Club was, to say the least, maintained by the Rabelaisian Dinner, held at the Midland Hotel, Birmingham, on February 8th, 1961. Unhappily the Club’s Chairman was absent, summoned (so his deputy explained) to a consultation in Nigeria.

The vice-chairman, Mr. Michael Clapham, presided with gusto over proceedings which he had been closely concerned in arranging. Prime credit for the success of an unforgettable feast belonged to the guest-sponsor, Dr. M.A. Screech, of the University of Birmlngham, author of The Rabelaisian Marriage. Guests of the Club were Mons. Jean Lapierre, Consul for France in Birmingham, Mr. W.G. Moore, Fellow of St. John‘s College, Oxford, and Mr. J.M. Milner, of Birmingham University.

At the reception washing basins were provided and a note on etiquette was circulated. This absolved us from wearing our hats at dinner and warned us not to eat our plates – which were made of bread. A copy of the note is inserted in these minutes.

Authentic Rillettes de Tours were served at the reception. As the sponsor commented later, Rabelais loved to bring sausages into his novel; for one reason, being so meaty and thus the opposite of fish, they came to stand to him for Protestants.

The dinner was served on wood trestle tables, bare, but well scrubbed, and lit by candles stuck into wine bottles. The chairman welcomed the Club‘s guests.

In his introductory remarks Dr. Screech said that today Rabelais meant two things, especially to those who had not read him: lavatory humour and gluttony. But in fact, he used obscenity only for comic condemnation. He was against gluttony. He mentioned belly-worship constantly in order to satirize it.

So a menu based on Rabelais‘ novel would be a menu he disapproved of. Worse, it would be dull; for instance, he particularly attacks monks for their love of what turns out, after scholarly research, to be bread and dripping. Rabelais, thank goodness, was not against good food. The meal that night was one he might have eaten himself at his home near Chinon in Touraine.

Commenting subsequently between courses, the sponsor said that tripe was a popular dish in Touraine. The Tripes Gargamelle on our menu was a reminder that it was over-indulgence in tripe that brought on the labouring pains was of Gargantua’s mother. Who but Rabelais would have used tripe to tell a comic story on which to hang a seriously Evangelical definition of true Faith?

The Vouvray white wine, served with the tripe, and the Bourgeuil, drunk later were both from the Loire valley in Rabelais’ own country.

Steak and oysters followed, eaten, like all the night’s dishes with knife and fingers – with the possible addition of a spoon for very delicate diners.

Then came venison patés, together with duck and chicken heaped on our plates of bread. . “Fingers, please”, the sponsor urged, “and dip your meat whenever you will in the sauce”. Members dipped. A long period elapsed before fingers were finally wiped and the company was at leisure to attend to the sponsor again.

Cheese before pudding. In Rabelais’ time, as well as to-day, goat cheese was a speciality of Touraine. The sweet, a favourite country pudding, was dried grapes soaked in liquor and mixed with cream. The grapes might have been prunes.

“The dinner will have been a success”, the sponsor concluded, “if people have talked and laughed a lot”. He could have had no anxiety about that. “It is better to write of laughter than of tears”, said Rabelais, “for laughter is the proper quality of Man”. By that measure the Club is full of proper men.

The chairman‘s expression of the Club’s thanks to Dr. Screech was most warmly applauded. He summoned the Head Chef, Mr. Mackie, to drink a glass with the Club, and voiced our gratitude to Mr. Phillips, Manager of the hotel, for all the pains he had taken.

The were 58 members were present. 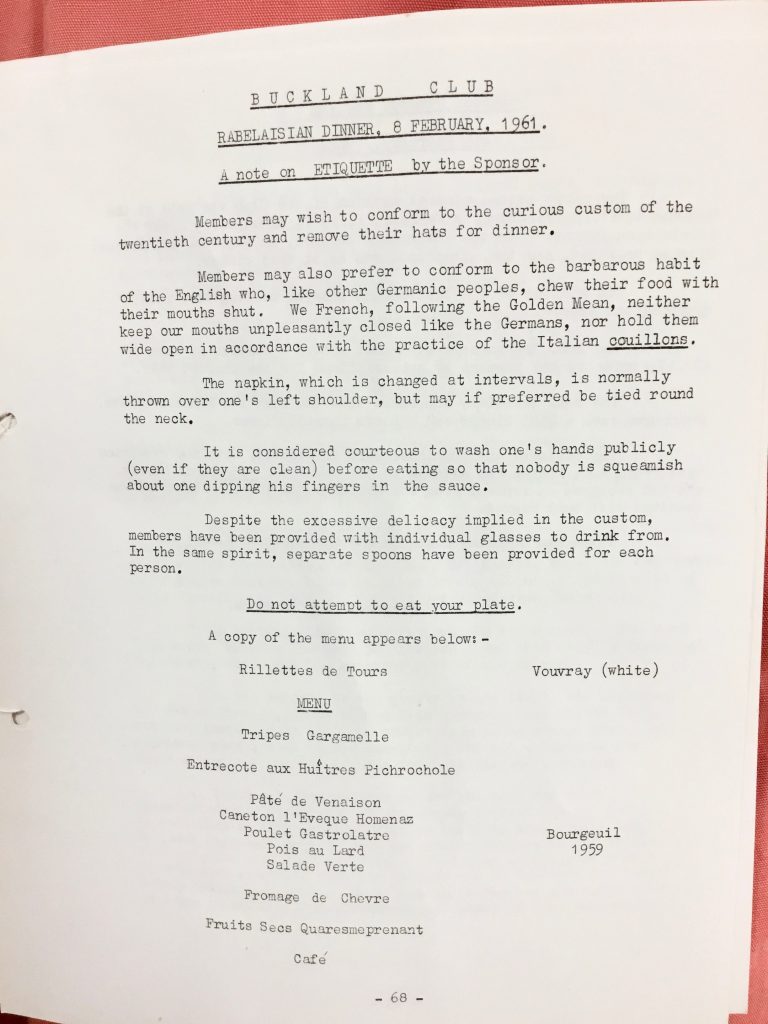