Minutes of A Thai Dinner

A Thai Dinner was held at the Midland Hotel, Birmingham, on October 11, 1961. Credit for its success and gratitude for overcoming all the difficulties should be shared between the Royal Thai Embassy and Peter Feeny, Honorary Consul for Thailand in Birmingham, a member of the Club, to whom the inception and largely the execution were due – in short, our friend at court.

His Excellency Mom Luang Peekdhip Malakul, Thai Ambassador in Britain, took a close personal and practical interest in the arrangements and honoured the Club by his attendance – the second Ambassador to sit at its table. Thanks to him, the fame of the Buckland Club reached Bangkok with bells. 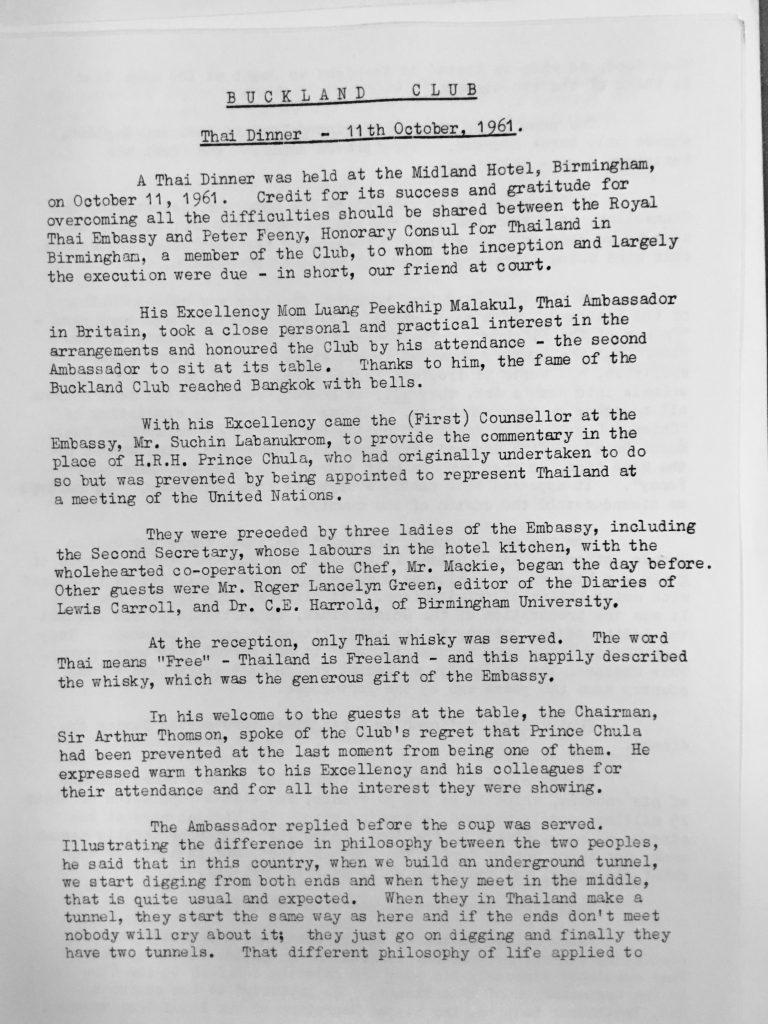 With his Excellency came the (First) Counsellor at the Embassy, Mr. Suchin Labanukrom, to provide the commentary in the place of H.R.H. Prince Chula, who had originally undertaken to do so but was prevented by being appointed to represent Thailand at a meeting of the United Nations.

They were preceded by three ladies of the Embassy, including the Second Secretary, whose labours in the hotel kitchen, with the wholehearted co-operation of the Chef, Mr. Mackie, began the day before. Other guests were Mr. Roger Lancelyn Green, editor of the Diaries of Lewis Carroll, and Dr. C.E. Harrold, of Birmingham University.

At the reception, only Thai whisky was served. The word Thai means “Free” – Thailand is Freeland – and this happily described the whisky, which was the generous gift of the Embassy. 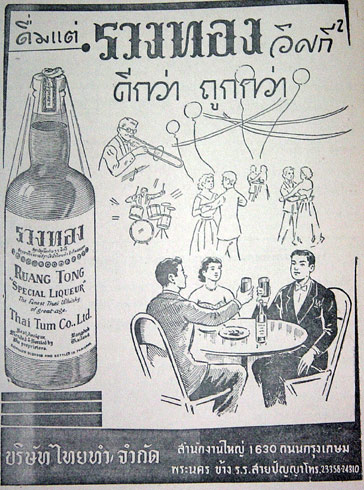 In his welcome to the guests at the table, the Chairman, Sir Arthur Thomson, spoke of the Club’s regret that Prince Chula had been prevented at the last moment from being one of them. He expressed warm thanks to his Excellency and his colleagues for their attendance and for all the interest they were showing.

The Ambassador replied before the soup was served. Illustrating the difference in philosophy between the two peoples, he said that in this country, when we build an underground tunnel, we start digging from both ends and when they meet in the middle that is quite usual and expected. When they in Thailand make a, tunnel, they start the same way as here and if the ends don’t meet nobody will cry about it; they just go on digging and finally they have two tunnels. That different philosophy of life applied to Thai food, so when we tasted it tonight we ought to think of the two tunnels.

The menu card, which was prlnted both in Thai and English, showed only three courses. They proved ample. The first was Partridge Soup – delicious. 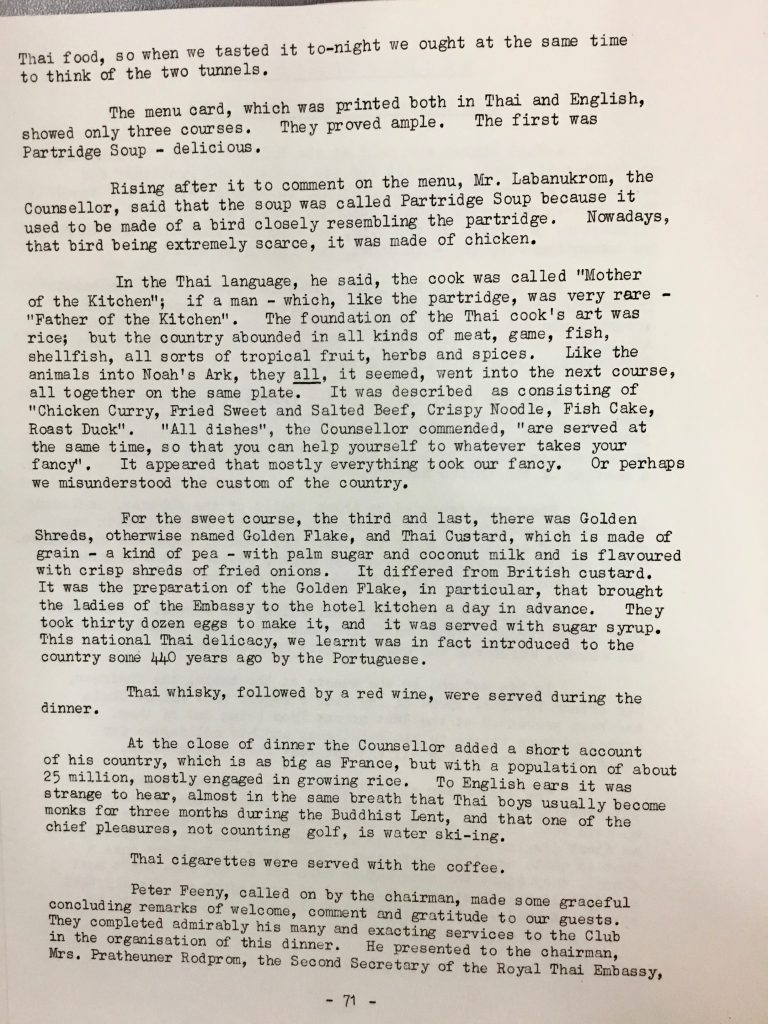 Rising after it to comment on the menu, Mr. Labanukrom, the Counsellor, said that the soup was called Partridge Soup because it used to be made of a bird closely resembling the partridge. Nowadays, that bird being extremely scarce, it was made of chicken.

In the Thai language, he said, the cook was called “Mother of the Kitchen”; if a man – which, like the partridge, was very rare – “Father of the Kitchen”. The foundation of the Thai cook’s art was rice; but the country abounded in all kinds of meat, game, fish, shellfish, all sorts of tropical fruit, herbs and spices. Like the animals into Noah’s Ark, they all, it seemed, went into the next course, all together on the same plate. It was described as consisting of “Chicken Curry, Fried Sweet and Salted Beef, Crispy Noodle, Fish Cake,Roast Duck”. “All dishes”, the Counsellor commended, “are served at the same time, so that you can help yourself to whatever takes your fancy”. It appeared that mostly everything took our fancy. Or perhaps we misunderstood the custom of the country.

For the sweet course, the third and last, there was Golden Shreds, otherwise named Golden Flake, and Thai Custard, which is made of grain – a kind of pea – with palm sugar and coconut milk and is flavoured with crisp shreds of fried onions. It differed from British custard.

It was the preparation of the Golden Flake, in particular, that brought the ladies of the Embassy to the hotel kitchen a day in advance. They took thirty dozen eggs to make it, and it was served with sugar syrup. This national Thai delicacy, we learnt was in fact introduced to the country some 440 years ago by the Portuguese.

Thai whisky, followed by a red wine, were served during the dinner.

At the close of the dinner the Counsellor added a short account of his country, which is as big as France, but with a population of about 25 million, mostly engaged in growing rice. To English ears it was strange to hear, almost in the same breath that Thai boys usually become monks for three months during the Buddhist Lent, and that one of the chief pleasures, not counting golf, is water ski-ing.

Thai cigarettes were served with the coffee,

Peter Feeny called on by the chairman, made some graceful concluding remarks of welcome, comment and gratitude to our guests. They completed admirably his many and exciting services to the Club in the organisation of this dinner. He presented to the chairman, Mrs. Pratheuner Rodprom, the Second Secretary of the Royal Thai Embassy who appeared shyly, gowned incredibly beautiful pink silk, to receive the company’s thanks and applause – both for herself and for her two colleagues, who were too shy to face the multitude at all. The Chef was also thanked in person. 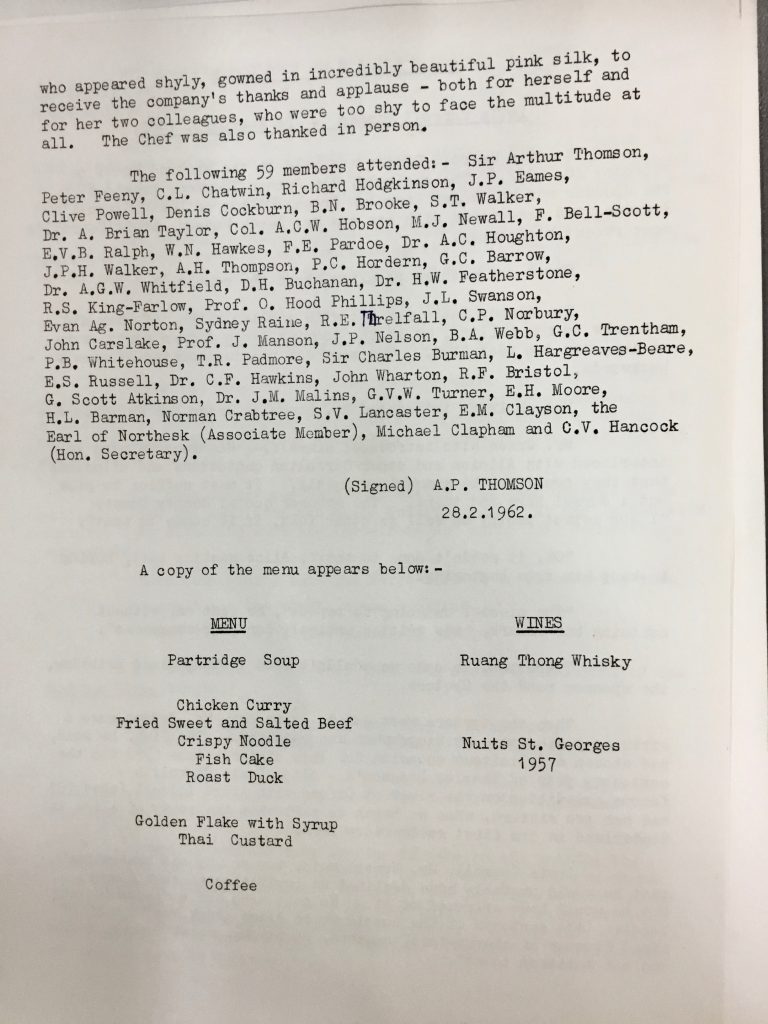