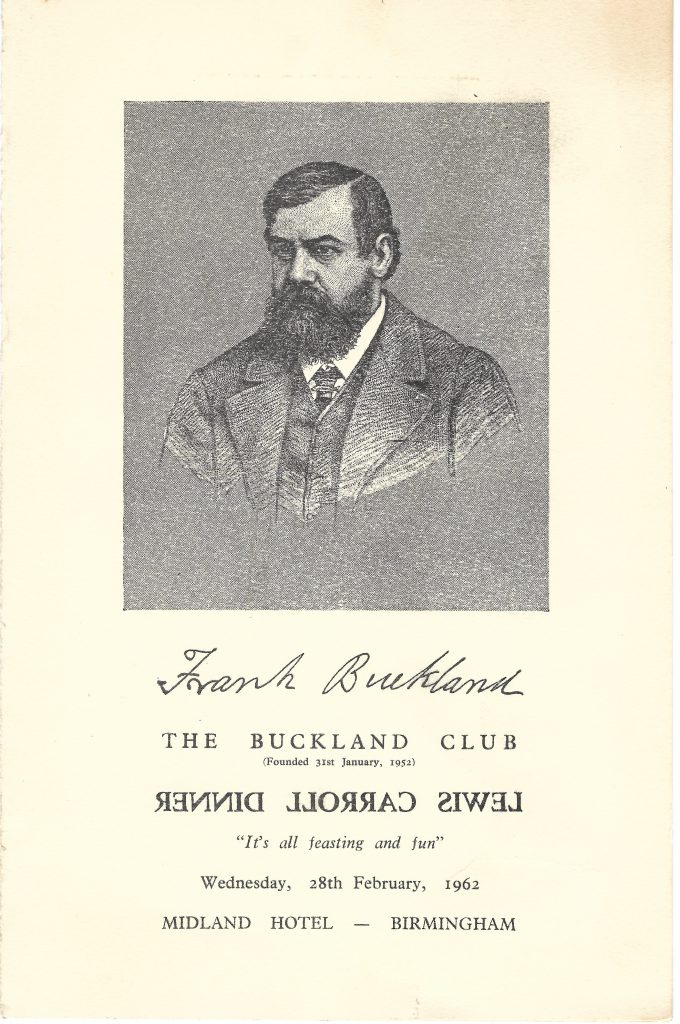 Minutes of the Lewis Carroll Dinner

There was nothing peculiar about the reception.

The dinner table was lit with candles which, if they did not grow to the ceiling, as in the Looking Glass dinner party, were at any rate two feet high. The menu was printed looking-glass-wise-backwards.

Mr. Green also introduced himself. His remarks were so interlaced with Alician and other Carrolian quotations and allusions that they could not be summarised justly. It must suffice to pick out a morsel here and there. The sponsor quoted Humpty Dumpty:

“I can repeat poetry as well as other folk, if it comes to that“.

“Oh, it needn’t come to that”, Alice hastily said, hoping to keep him from beginning.

“The piece I am going to repeat”, he went on, without noticing her remark, “was written entirely for your amusement” . 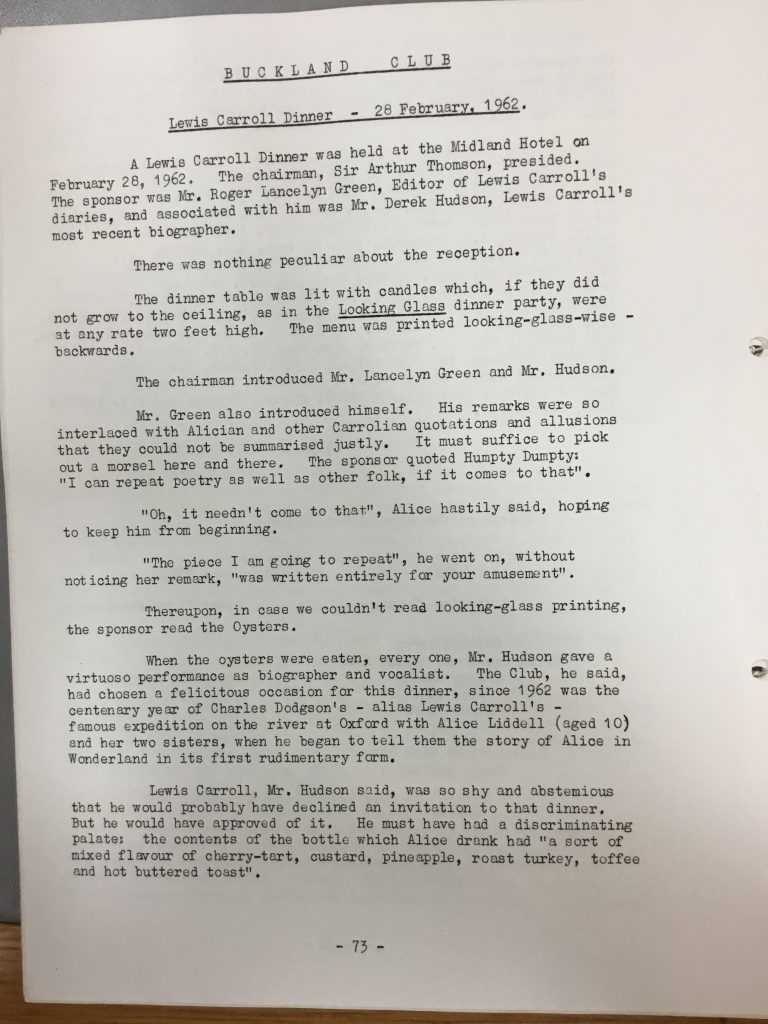 Thereupon, in case we couldn’t read looking-glass printing, the sponsor read the Oysters.

When the oysters were eaten, every one, Mr. Hudson gave a virtuoso performance as biographer and vocalist. The Club, he said, had chosen a felicitous occasion for this dinner, since 1962 was the centenary year of Charles Dodgson’s – alias Lewis Carroll’s – famous expedition on the river at Oxford with Alice Liddell (aged 10) and her two Sisters, when he began to tell them the story of Alice in Wonderland in its first rudimentary form.

Lewis Carroll, Mr Hudson said was so shy and abstemious that he would probably have declined an invitation to that dinner. But he would have approved of it. He must have had a discriminating palate: the contents of the bottle which Alice drank had “a sort of mixed flavour of cherry-tart, custard, pineapple, roast turkey, toffee and hot buttered toast”. 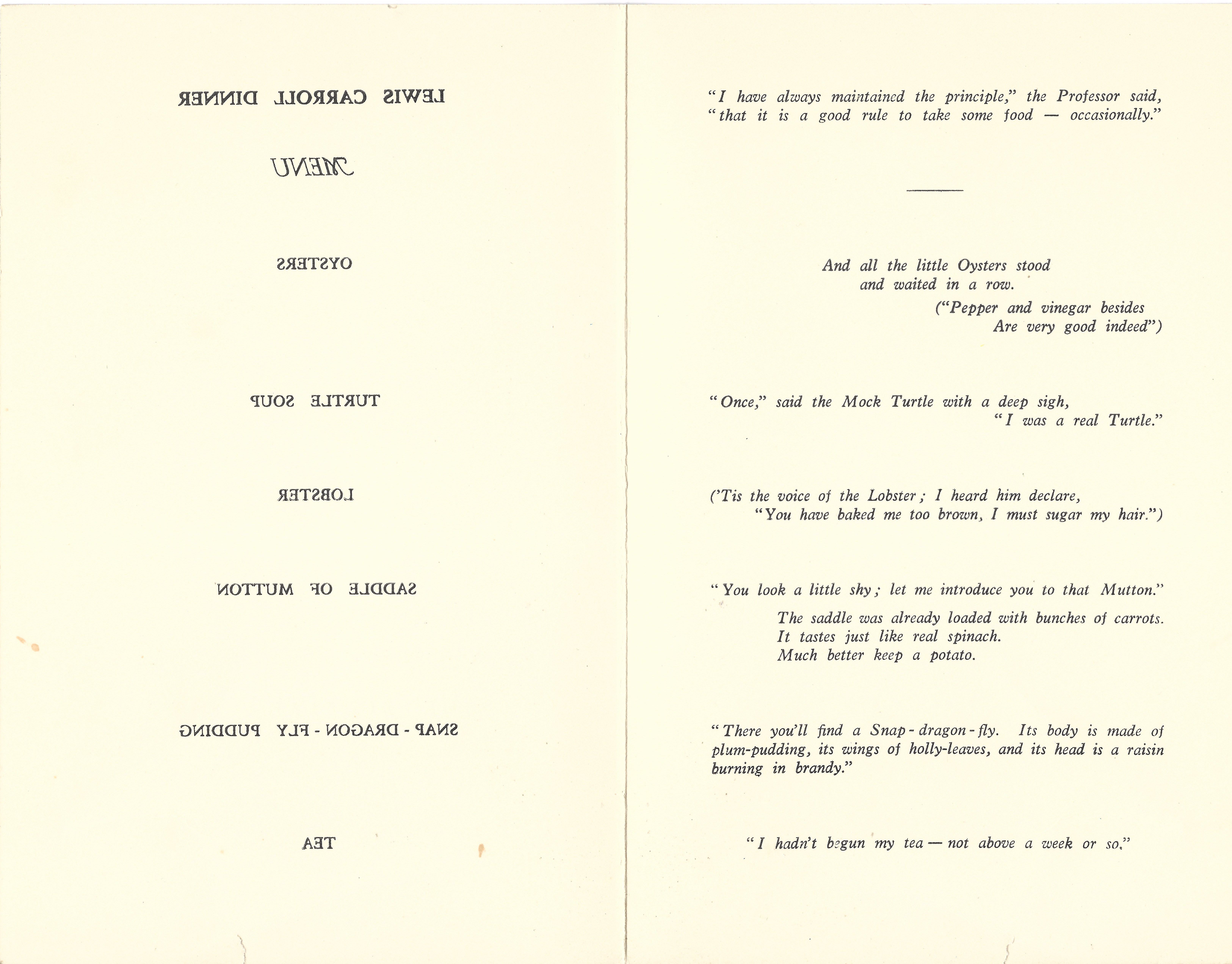 Mr. Hudson concluded an admirable sketch of Lewis Carroll by singing, sole and unaccompanied, the whole of the song of “Beautiful Soup, Soup, Soup of the Evening, Beautiful, Beautiful Soup”. 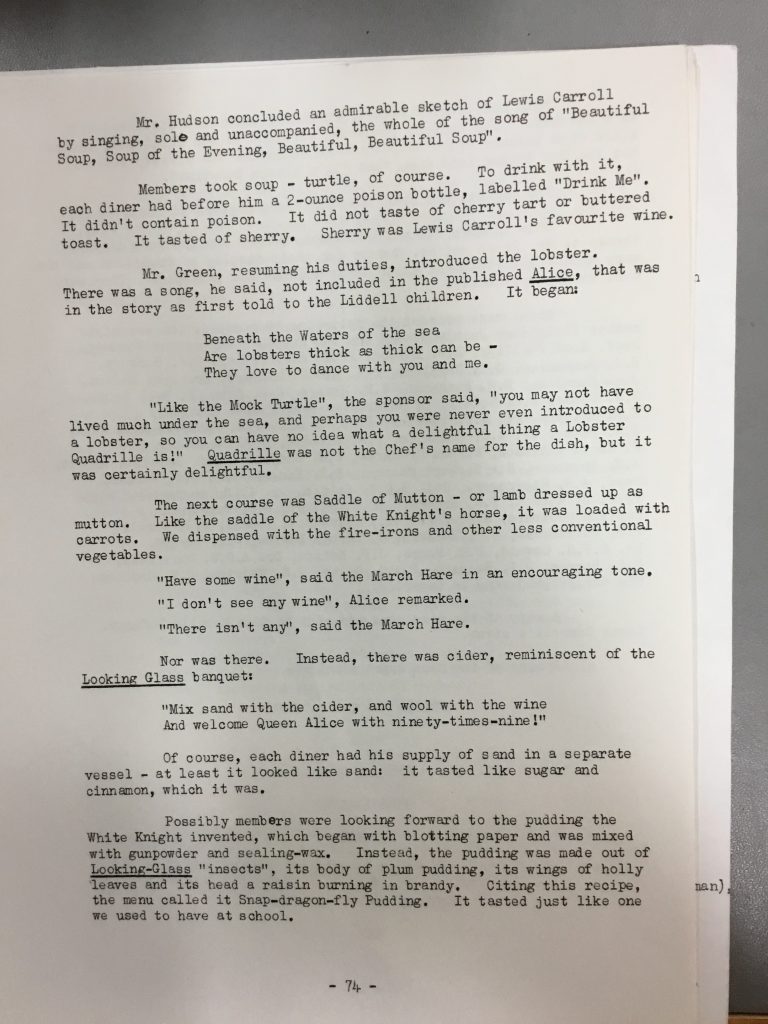 Members took soup – turtle, of course. To drink with it each diner had before him a 2-ounce poison bottle, labelled “Drink me”. It didn’t contain poison. It did not taste of cherry tart or buttered toast. It tasted of sherry. Sherry was Lewis Carroll’s favourite wine.

Mr. Green, resuming his duties, introduced the lobster. There was a song, he said, not included in the published Alice, that was in the story as first told to the Liddell children. It began:

Beneath the Waters of the sea .

Are lobsters thick as thick can be –

They love to dance with you and me.

“Like the Mock Turtle”, the sponsor said, “you may not have lived much under the sea, and perhaps you were never even introduced to a lobster, so you can have no idea what a delightful thing a Lobster Quadrille is!” Quadrille was not the Chef’s name for the dish, but it was certainly delightful.

The next course was Saddle of Mutton – or lamb dressed up as mutton. Like the saddle of the White Knight’s horse, it was loaded with carrots. We dispensed with the fire-irons and other less conventional vegetables.

“Have some wine”, said the March Here in an encouraging tone. .

“There isn‘t any”, said the March Hare.

Nor was there. Instead, there was cider, reminiscent of the Looking Glass banquet: ;

“Mix sand with the cider, and wool with the wine

And welcome Queen Alice with ninety-times-nine!”

Of course, each diner had his supply of sand in a separate vessel – at least it looked like sand: it tasted like sugar and cinnamon, which it was.

Possibly members. were looking forward to the pudding the White Knight invented, which began with blotting paper and was mixed with gunpowder and sealing-wax. Instead, the pudding was made out of Looking-Glass “insects”, it’s body of plum pudding, its wings of holly leaves and its head a raisin burning in brandy. Citing this recipe, the menu called it Snap-dragon-fly Pudding. It tasted just like one we used to have at school.

Both hot toasted cheese and candle ends were dispensed with as a savoury The company proceeded straight to the final tea, served black from immense brown teapots. No doormouse was visibly present, but the Mad Hatter laid down that “it’s always tea-time”.

For digestion‘s sake the Club added a glass of port.

This mixture did not noticeably hamper the Chairman in his thanks to Mr. Green and Mr. Hudson for their display of erudition and the very choice entertainment which their talents had provided. They were most warmly applauded.

There were present 59 members, one associate member and two guests. 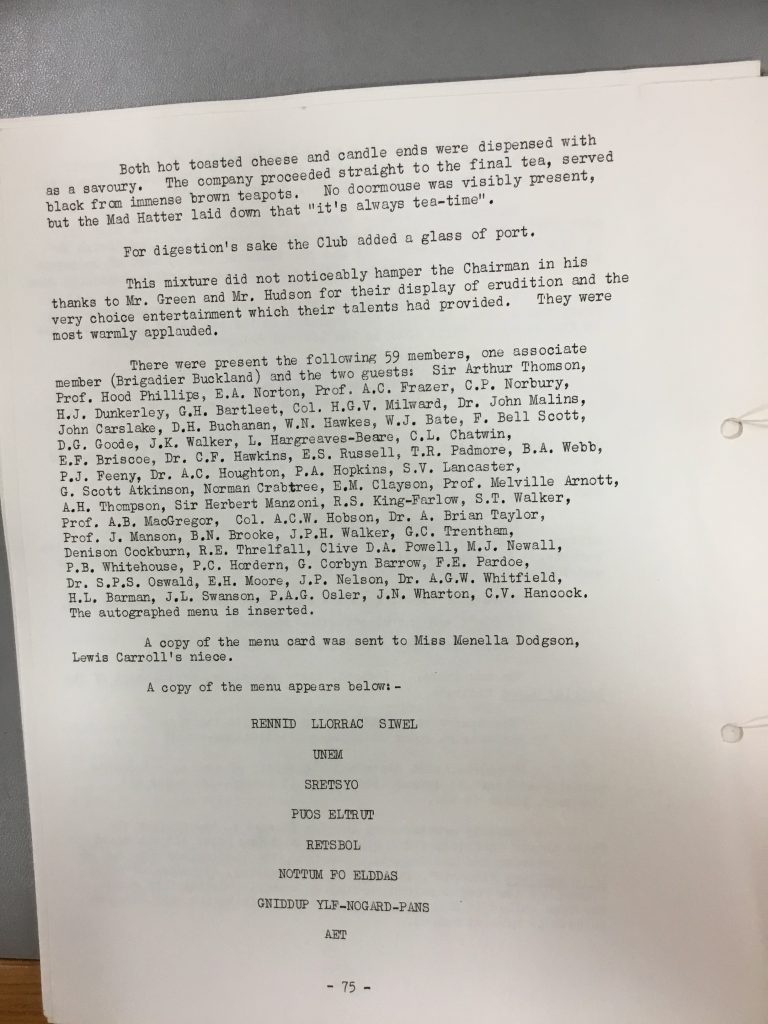 A copy of the menu card was sent to Miss Menella Dodson, Lewis Carroll’s niece.