Minutes of the Shakespeare Dinner

Held at the Midland Hotel, Birmingham, on February 19th, instead of the statutory February 4th, the Club’s Spring Dinner of 1964 was a Shakespeare Dinner, this being the quatercentenary year of William Shakespeare’ s birth. 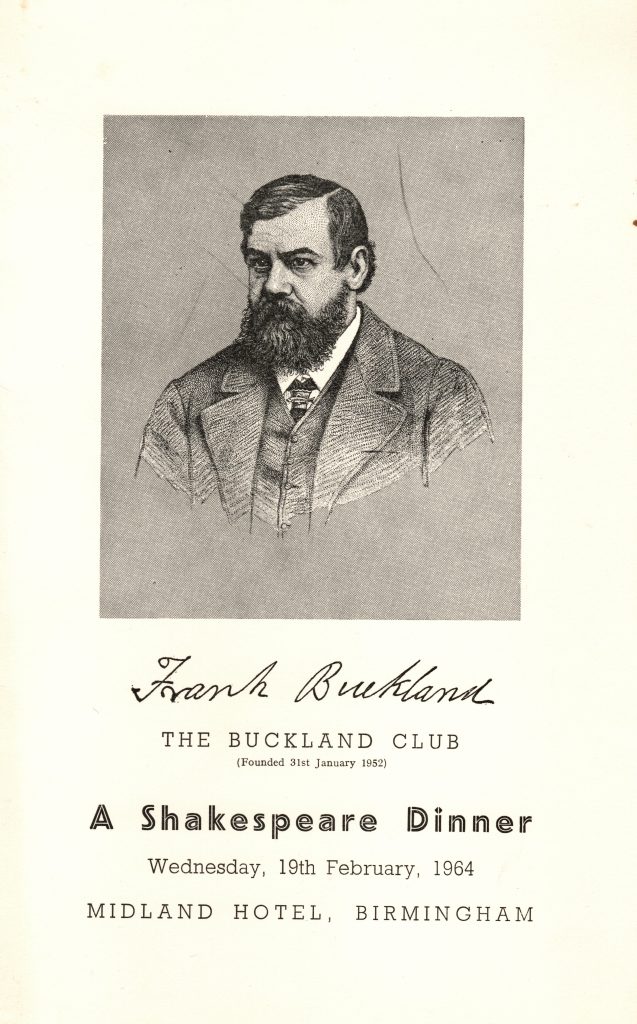 The Chairman, Sir Arthur Thomson, presided over a company of 66. The principal guest and sponsor was Professor T.J.B. Spencer, head of the Department of English Language & Literature, Birmingham University, and Director of the Shakespeare Institute. The Club’s other guests were Mr. J.C. Trewin, Theatre Critic of “The Birmingham Post”, Mr. Victor Woods, Birmingham City Librarian, Professor Ellis Waterhouse, Director of the Barber Institute, and Mr. J.S. Barclay, Clerk to the Fishmongers‘ Company, the last two being sponsors – designate of projected dinners. At the last moment Mr. Levi Fox, Director of the Shakespeare Birthday Trust, was unable to attend.

At the reception Rhenish was our only drink.

In welcoming the club’s guests at the table, the chairman announced that Prof. Spencer had two “Penguin” volumes about to be published and described Mr. Woods as custodian of one of Birmingham’s fine things, its matchless Shakespeare Library. He mentioned that in the New Year’ s Honours three members had been awarded Knighthoods and an associate member created K.C.B.

The sponsor’s first comments followed the first course Almond Pottage, but without a Soupçon of Cyanide. The Elizabethans were fond of that flavour. “Soup’ was a post-Shakespearian word. With the pottage Sherris Sack was served –  not “an intolerable deal” of it. Shakespeare, Prof. Spencer said, was fastidious about food and liked no surfeit. The Elizabethans ate much as we do. Their staple foods were mostly those we know well: beef, mutton and veal; pork, fish, wild fowl (including larks and quail), hens and geese, fallow dear rabbits. In 1589, when Shakespeare was 25 beef cost three-farthings a pound: a leg of mutton, 1/6d. Country folk had little of this variety. The custom was to have meat meals on Sundays and at Thursday suppers. For the rest of the week it was pease and bacon or fish, washed down with cider or home-brewed ale. For winter, salted beef and fish had been laid by.

The next course was a Greate Sallett, that is a salad augmented with meat, fish and eggs. Later it was called a Salmagundi, the sponsor said, a splendid name unhappily replaced by the genteel “hors d’oeuvre”. Our Greatest Sallett was compounded of: – cabbage, chervil, chicken (diced), violets, herring (pickled), eggs (filled), celeriac (turnip-rooted celery).

Hare furnished the third course. It used to have the name nourishing melancholy and was allowable in Lent. The order of the meal, the Sponsor said, had presented difficulties. It was not so rigidly fixed four centuries ago. By one contemporary account, “We commonly begin with the most gross food and end with the most delicate . . . We use also our wines by degrees, so that the hottest cometh last to the table”. Tables could be covered with fine damask, and napkins would be provided; but in ordinary households guests brought their own knives to cut up their food. Between the dish and the lip was where spoons came in – or fingers; Shakespeare never mentions the fork as a table implement. Most Englishmen, of all classes, used their fingers till Queen Anne’ s reign. There was light-coloured bread, but countrymen preferred barley and rye brown bread to white bread “as abiding longer in the stomach and not so soon digested with their labour”.

Clarett was served with this and the next course. Though ale and small beer were drunk by all classes, Spanish, French and German Wines were imported in much variety. A bill in Falstaff’s pocket included “Item, sack, two gallons, 5s. 8d.” Wines were no longer drunk from cups but from glasses, which had become as cheap as 6 for ninepence. 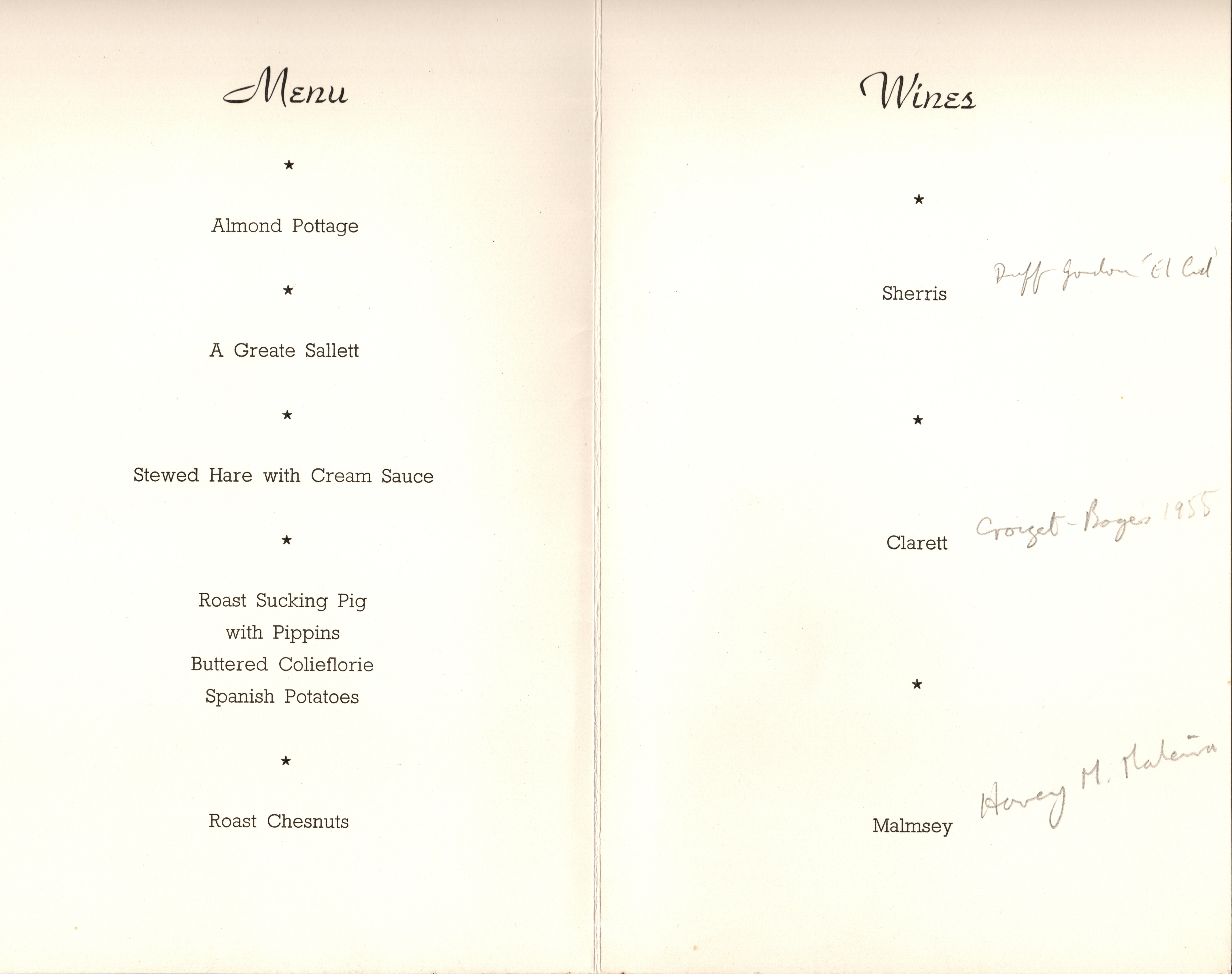 Commenting on the chief course, Professor Spencer said he might have included pike, swan and boar’s head, but had preferred roast sucking pig. This was manifestly a popular preference, to judge by the Reception which the company accorded to the golden-brown twins as they were presented to the Chairman by an escort of chefs.

The potatoes were Spanish – that is, sweet. This year, we learnt, we were in fact celebrating two quatercentenaries, Shakespeare’s and the potato’s. The Spaniards first found it cultivated in Peru. Soon Sir John Hawkins brought it to England – not Sir Walter Raleigh; the familiar story was dubious. Only gradually did our tubers supersede the Spanish; at first they were called bastard or Virginian potatoes. Potatoes had an Elizabethan reputation as “provocatives”. Thus Gerard’ s Herbal: “Howsoever they be dressed, they comfort, nourish and strengthen the body, procure bodily lust and that with great greediness”.

The only course to follow was roast chestnuts, to accompany the Malmsey. Dishes of oranges lent colour to the table; this was a practical history lesson that Shakespeare’ s oranges were Seville oranges, notably bitter. Members who recklessly called for sugar to sweeten them forgot, no doubt, that Shakespeare’s sugar cost twenty Elizabethan shillings a pound.

After the toast of the Queen, Professor Spencer proposed the toast of the Club. The quatercentenary of Shakespeare’s death was only 52 years ahead. He hoped the Club would celebrate that, too.