Minutes of the Fishmongers’  Dinner

On October 14th 1964, at the Midland Hotel, Birmingham, the Club held a Fishmongers’ Dinner, so called because the courses were all more or less fishy and because it was most kindly and expertly sponsored by Mr. J.S. Barclay, Clerk to the Fishmongers’ Company.

At the reception strips of smoked eel, with slices of lemon, accompanied the apéritifs. The room was decorated with a series of coloured prints of all the edible fish that swim.

The Chairman, Professor Sir Arthur Thomson, presided. Prof. E.B. Chain, F.R.S. and a Nobel Laureate, was also a guest. In welcoming the Club‘s guests the Chairman referred to Prof. Chain’s considerable part in the discovery of penicillin. He called on Mr. Barclay to say the Fishmongers‘ Company’s Grace:

God give us grace

Our Lord to please.

In peace and health 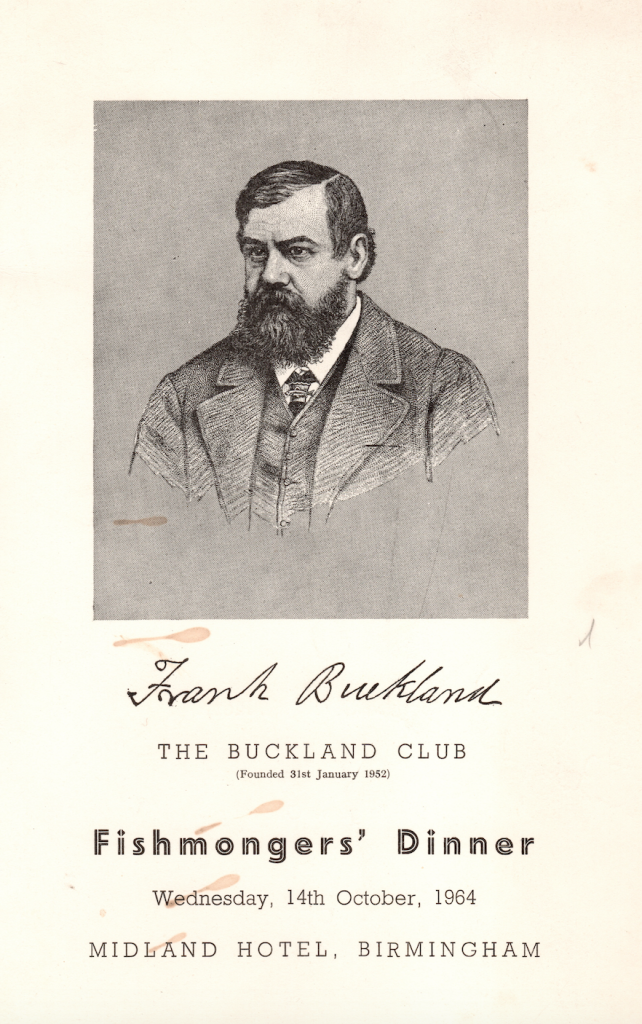 Loaves of golden bread on the table had the shape of fish, but only the shape. One sensed ~ feeling among the Club‘s less adventurous members that here, thanks be, was a dinner to which they could settle down without apprehensive anticipations or queasy qualms.

The first course, Crème a la Grecque, turned out to be smoked cod’s roe according to Constance Spry. Host luscious, it was eaten on toast with butter like paté.

The menu, the Sponsor reported, had been chosen to show what can be done with ordinary fish from a fishmonger’s slab. He described the work of the Fishmongers’ Company, one of the Twelve Great Livery Companies of the City of London, and one of the few Companies still active in the trade from which they are named. The Fishmongers’ Company still inspects all London’s fish. It has endowed and managed schools, almshouses and its own system of social security for the trade’s older members.

Rising again after the Potage aux Moules Mr. Barclay emphasised that a fish inspector could not tell by looking if an oyster or mussel was good or had typhoid germs – an important question if the shell fish were to be eaten raw or lightly cooked. It used to take 7 or 10 days for the Public Analyst to reach a verdict. The Fishmongers’ Company had reduced that interval to an hours by looking, not for typhoid but for sewage.

The Kipper Soufflé suggested herrings to the Sponsor, who related how Sir Thomas Gresham, of the Mercers’ Company, wanted to found a school in his native Norfolk but was refused help by his own Company. So he turned to the Fishmongers to become trustees and governors of Gresham‘s School, Holt. The Company had recently lent he school £120,000, free of interest, towards new buildings.

With these courses an Anjou Vin Rosé was served. It was followed by a Chassagne Montrachet 1961.

The principal course was fillet of brill stuffed with salmon, a dish, the Sponsor recalled, that was created at Pruniers in Paris for the 80th birthday of Cuznonsky, “Prince of Gastronomes”.

Speaking of salmon, he said that one of the Company’s great successes had been its work over the past century for salmon preservation. It had even forced Scotsman to observe their own laws against poaching. The Salmon and Trout Association was born at Fishmongers‘ Hall and had lately shown some of its power in compelling the Government to accept an amendment to the water Resources Bill for the sake of fisheries.

The ice and its name were the Sponsor’s invention – Bombe Glacée St. Pierre: fishy only to the extent of embodying little chocolate fish. But like real fish, Mr. Barclay commented, it required unpolluted water. The Fishmongers’ Company and the Salmon and Trout Association had fought the long anti-pollution battle.

When John Eastwood, K.C., founded the A.C.A. to join the fight, the Company became its largest guarantor of legal expenses.

So we came to the oyster savoury, and were reminded that 150 years ago this “angelic fish” was the food of the poor at 4d a gallon. And so to Cockburn’s 1950. 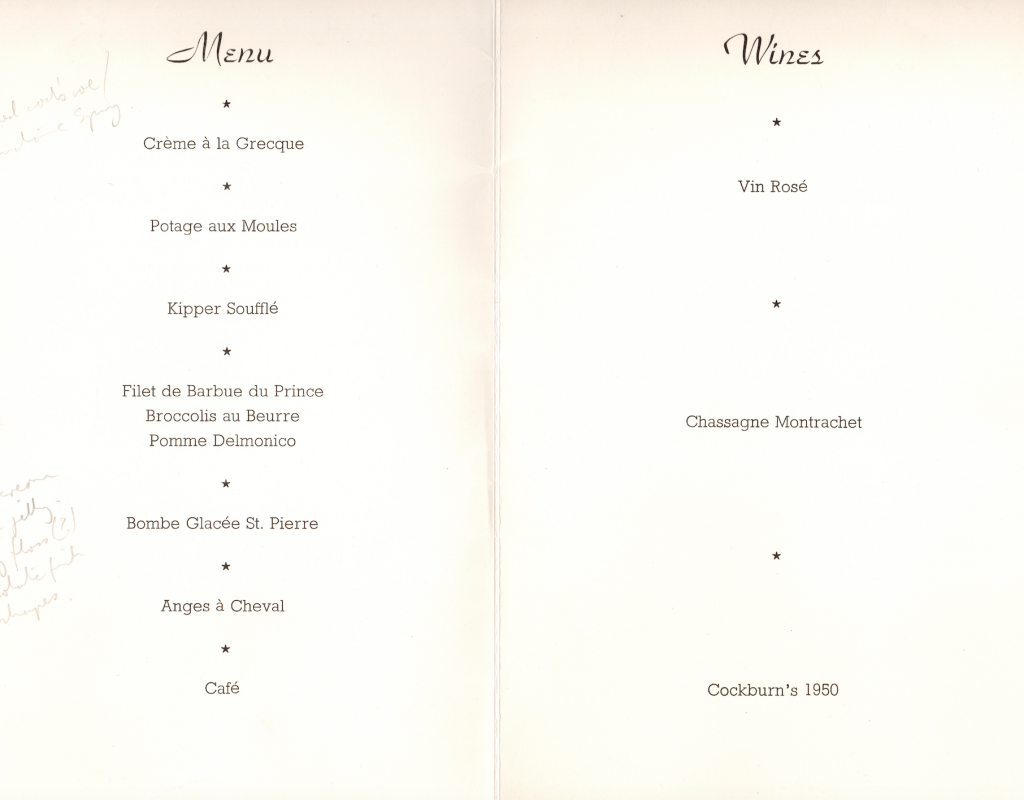 The Sponsor congratulated the Chef on carrying out his wishes to perfection. On the chairman’s invitation, Mr. Mackie, the Chef, then took wine with the Club.

Prof. Chain, offering the Club his best wishes, said he had eaten fish in places as far apart as Chile, Shanghai and Paris, but never a better fish dinner than that night’s. There were odd ideas that the English did not like music and food; both were nonsense.