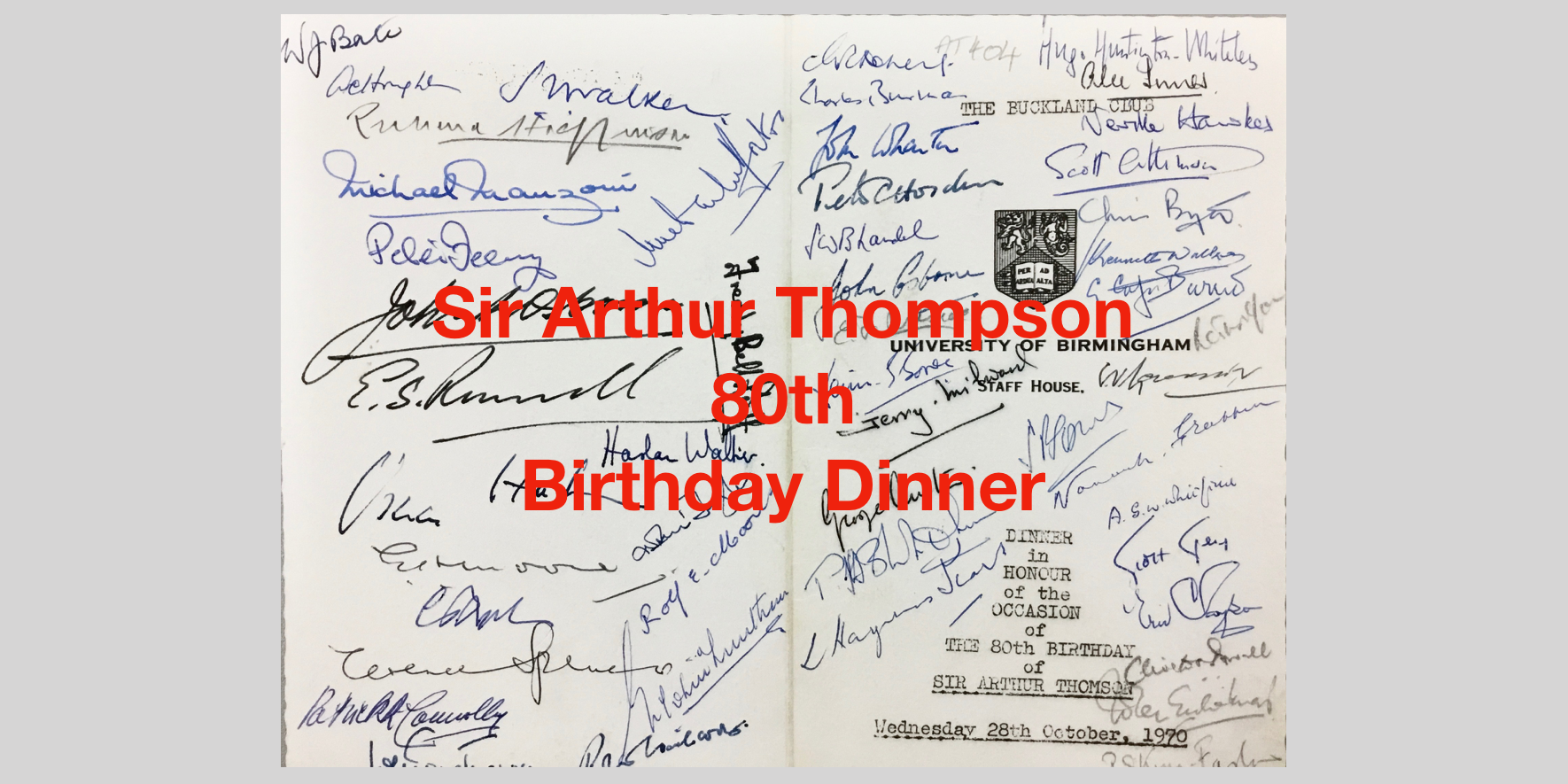 There were two memorable things about the Buckland Club Dinner held at the University Staff House, Birmingham, on Wednesday, the 28th October, 1970. The first was the occasion and the second was the beef.

The occasion was to celebrate the 80th anniversary of the birth of our Co-Founder and former Chairman, Sir Arthur Thomson, and he asked that it should be an English Dinner. He said that after some sixty or seventy years of smoking and drinking (I am not quite sure when it started) he had quite ruined his palate and would like simple English fare. He is then reputed to have added, “and that will leave us more money for the wine, won’t it”.

Of the beef I will only say that the baron which formed the principal course of our meal was cut 1n thick slices and melted in the mouth in a manner the like of which I have seldom met before.

There was, of necessity, opened up once again that deep internecine strife between Englishmen, more bitter than the Wars of the Roses, dividing brother from brother more surely than that between Cavalier and Roundhead, engendering more passion than the politcs of the 18th Century Wigs and Tories, or even that  deep cleavage between the gentle pink of today’s right wing as against the more sturdy hue of the Left (I am assuming that no Buckland Club member could, politically or gastronomically, be labelled with the teak coloured hue of reaction or the revolutionary blood red of some of our continental neighbours).

I refer, of course, to the bitter dispute between those who believe that beef should be “well done” and those who know it should be “rare” .

Recognising that the members of the Buckland Club each represent as delegates, of course, approximately ten thousand of England’s gastronomes, I took a card vote. The result: 600,000 in favour of “rare”, 400, 000 renegades in favour of “well done” or, as I suppose we might say, 6 to 4 the ﬁeld. 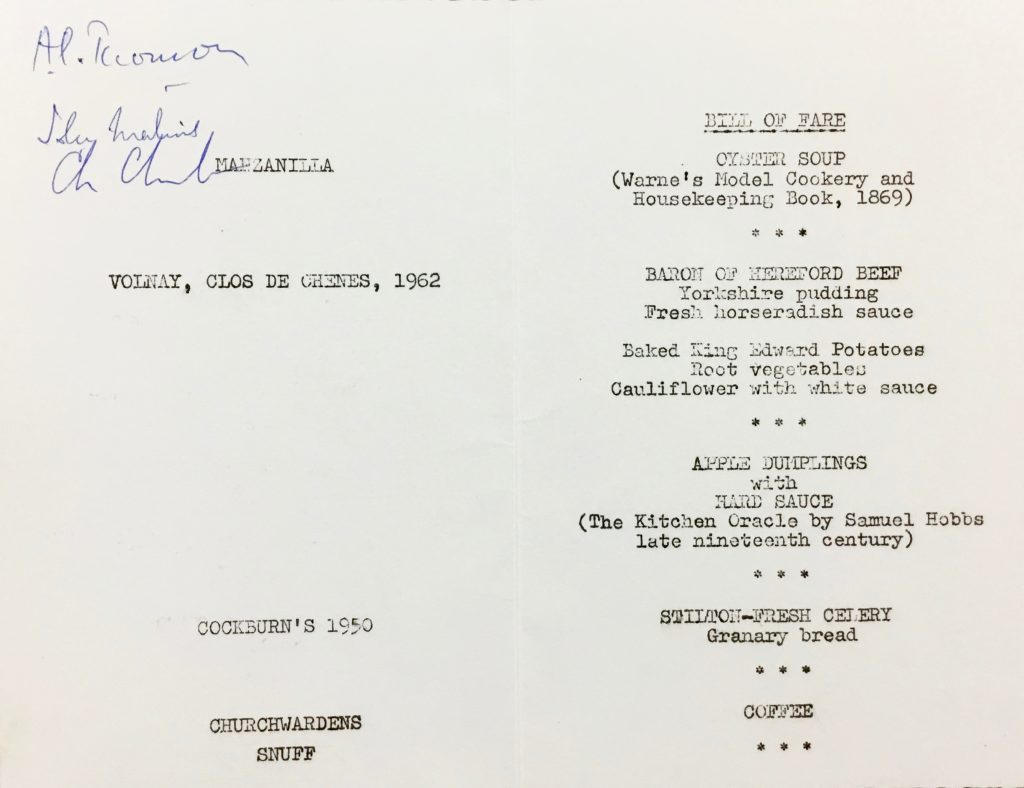 The members were, however, unanimous that the beef was quite excellent. The Club was indebted to John Malins, an old pupil of Sir Arthur, for arranging the Dinner and it was clear that he had given very careful thought to the time scale . Beforehand we drank Champagne and Malins referred us to the first dry vintages of 1884 and 1889 saying that before then Champagne was a sweet wine suitable for women but in the 90’s, when Sir Arthur would be taking an intelligent interest in such matters, he suggested that men who could afford it tended to drink Champagne throughout the meal.

Our first course was Oyster Soup taken from Warne’s Model Cookery and Housekeeping Book 1869 and we were reminded how this bivalve had changed from a sign of poverty in Sam Weller’s day (12 for 4d. in 1840) to the expensive luxury of today. Indeed it was only on oysters at the Hope and Anchor in Edmund Street at ls. 6d. for half a dozen that the student Malins was able to keep awake throughout A.P. ‘s afternoon lectures. .

The main dish of Baron of Hereford Beef accompanied by Yorkshire pudding, fresh horseradish sauce, baked King Edward potatoes, root vegetables and cauliflower. We were reminded that it was on the roast beef of old England that the bowmen of Cressy and Agincourt had been reared and that the advantages were obvious to men of many nations; for example the dogrel Indian poem: –

“Behold the Mighty Englishman, he rules the Indian small,

Because he is a Meat Eater, he is five cubits tall”.

The horseradish came from Malins own garden. It was magnificent stuff and such of the members as were gardeners sympathised with him. ln the opinion of those members who have Yorkshire born wives Yorkshire pudding was as good as could be expected and the potatoes were very properly, served in the manner recommended by Mrs. Beeton, namely, in their jackets .

With this course we drank Burgundy which Malins described as not really an English drink, possibly because Burgundy has no outlet to the sea and he speculated as to whether Charles II may not have enjoyed this wine whilst in exile and brought it back to England with him. The wine was well recognised early in the 18th Century and Malins was in full agreement with Peacock who, when writing to his son-in-law, George Meredith, described Burgundy as the Emperor of wine and Hock as the Empress. There was,however, no doubt that the drink was popular in England by the time of Sir Arthur’s birthday and there was no need of an excuse for drinking the Volley Clos De Chenes 1962, as Volnay has always been in the top grade of the Cote de Beaune wines. When Louis XI became Master of Burgundy in 1477 he ordered the entire vintage of Volnay to be sent to him and when Sobieski was crowned King of Poland again Volnay was ordered to regale the entire Court in celebration of the event.

The main course was followed by that characteristic English dish Apple Dumplings, served with a Hard Sauce which, we were told, is ‘very popular in the United States but in England tends to be eaten only with Christmas Pudding. The noble apples were Bramleys from Christopher Norbury’s orchards. There was no doubt about their suitability for dumplings although Malins was not too happy about growing them but whether this arose from the fact that they tended to suffer from scab and to be hit by frosts or because “this is a triployd apple with fifty one chrysosomes and therefore very poor in polination of other fruit” we were left in a little doubt.

After such a meal how would it have been possible to end otherwise than with Stilton and Vintage Port? Malins was right in saying that Stilton needed little introduction, and very good it was, but he gave us some interesting side lights on this cheese. . It is made from May to September and is at its best about nine months thereafter. It was said to have been invented by Mrs. Paulet at the end of the 18th Century because there are descriptions of enormous piles of cheeses outside The Bell at Stilton in Huntingdonshire, but evidence of it is well known long before that. Pope, in imitation of the Sixth Satire of Horace, describes the entertainment of the town mouse by the country mouse:-

“He bought bacon, nothing lean,

Cheese such as men in Suffolk make –

Wished it Stilton for his sake”.

It was clear, therefore, that this cheese was familiar early in the l8th Century. With our Stilton we drank Cockburn ’50 described as not the greatest of years but nevertheless it went down very well.

At the conclusion of the meal Malins proposed the health of Sir Arthur Thomson. When Malins first knew him Sir Arthur enjoyed the sort of consulting practice which would never happen again, visiting the homes of the highest and the lowest in the land. Further experience during the War made it clear that if one were in a tight corner A.P. was the sort of man to have at one’s side. After the War he got involved in planning and anybody who has had to do with planning for doctors will know that this makes international diplomacy look like child’s play. Nevertheless, it had now become apparent that many of his ideas which at the time may have been regarded as revolutionary were clearly no more than premature andare now accepted. Malins hoped that during the last twenty years or so Sir Arthur had found the dinners of the Buckland Club a pleasant relaxation from other more strenuous meetings and it was clear that the Club would never have got going without his leadership. Therefore, he found it easy to ask the Club to drink to his health.

Sir Arthur replied and followed with a fascinating paper on the life and work of Frank Buckland (a copy of which is interleaved with the Minutes*).

The Chairman told the Club that the handsome silver salver on the table was that presented to Cyril Hancock upon his retirement as Honorary Secretary and that by his Will it had been bequeathed to the Club.

A toast was drunk to the memory of Cyril Hancock. ,

Members were pleased to have with them that night, as a guest, Dr. John Enticknap, a very distinguished amateur in wines and culinary matters and until recently Secretary of the Wine Society Dining Club. It was hoped that next year he would take us back into the peaceful gluttony of the 18th Century by sponsoring for us a Parson Woodforde Dinner. 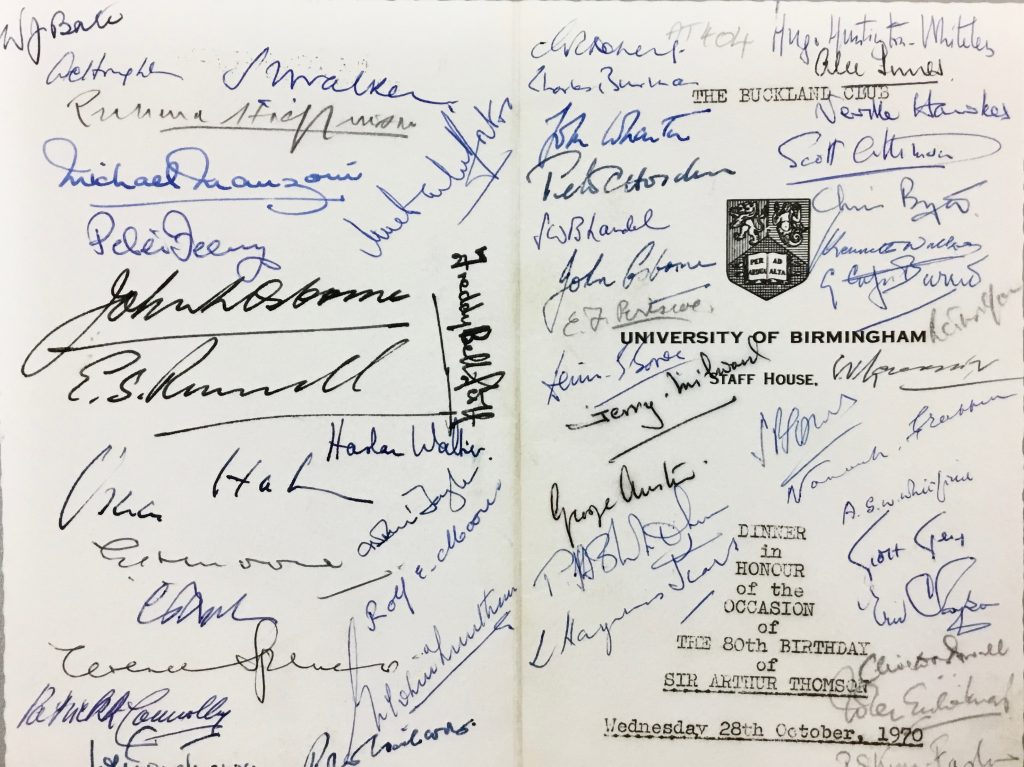