The Minutes of a Pepys Diner

The Dinner was held at the Staff House, Birmingham University and was sponsored by Professor Robert Latham, C.B.E., Dean and Pepys Librarian of Magdalene College, Cambridge.

The Chairman welcomed Professor Latham to the Buckland Club as a born and bred Midlander and drew attention to the eight volumes (out of a projected eleven) on the table comprising a complete and unexpurgated edition of the Pepys diary edited by him in conjunction with Professor Matthews. 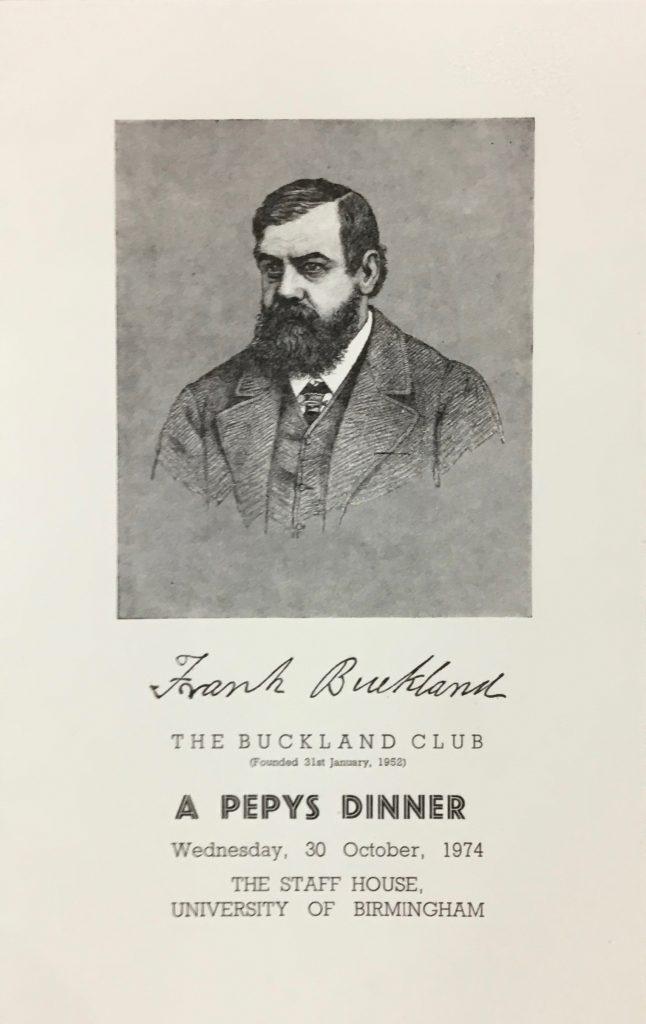 0ur Sponsor said that our meal could not be entirely authentic. Were this to be so we might have had to eat cows udder, we should have eaten at noon, wearing our hats, using no forks, putting sugar in our wine and having had no breakfast.

Pepys was not really interested in food, but more in the occasion of a meal and the conversation it produced. Thus the diary records little of the actual food eaten and more of the circumstances surrounding it. For instance, reference is made in the diary to the new French fashion of eating course by course. rather than having all the food on the table at one time. Nevertheless, the dishes which we were to have were such as either were, or might well have been customarily eaten by Pepys. 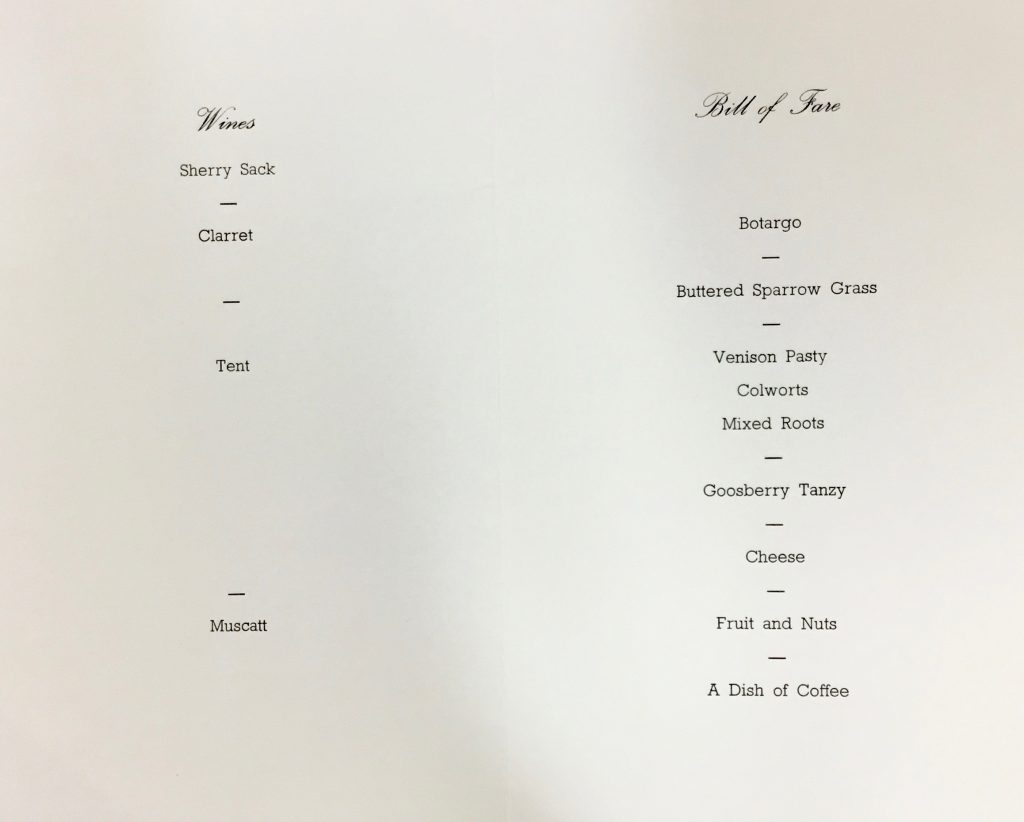 Our first dish was BOTARGO, made from salted dried fish. The Club‘s records are uncertain as to whether our Sponsor agreed or disagreed with our President’s suggestion that the dish was “a 17th Century fish finger”. The writer inclines to the former view and if this is correct there is no doubt that it showed up well when compared with its 20th Century cousin. With the fish we drank Sack which, we were told, was a term which then covered Sherry or any dry white wine from Spain. 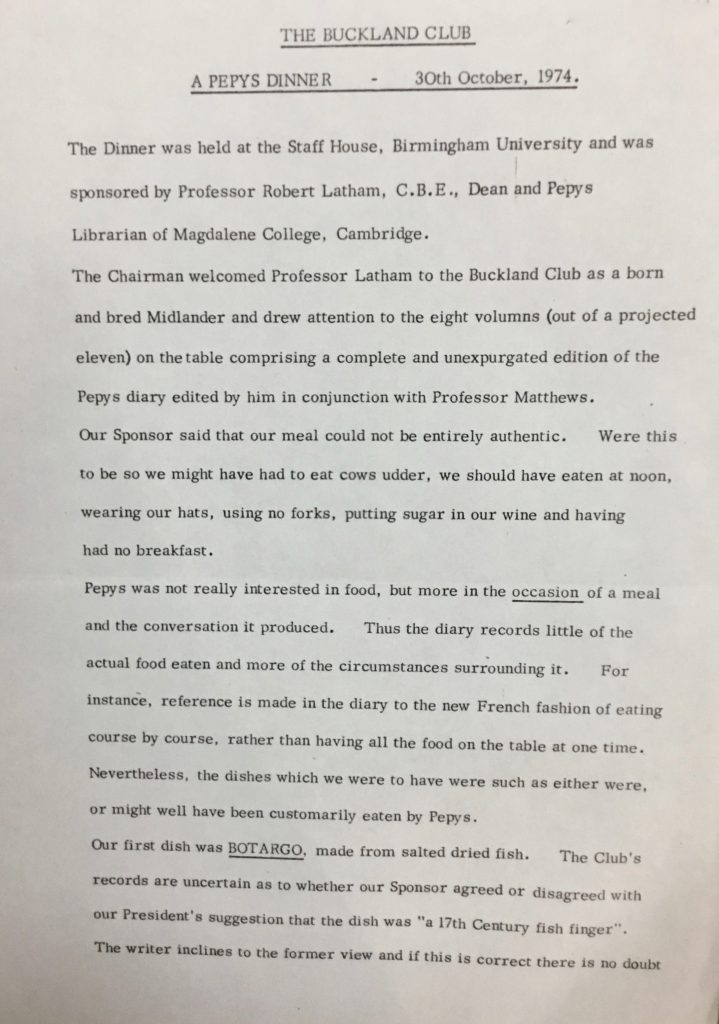 Of the BUTTERED SPARROW GRASS, which followed, it can only be said that it would have been better had the dinner been held seven months later when the best of the Evesham “Grass” would have been available.

There is no doubt that the VENISON PASTY together with COLWORTS and MIXED ROOTS was the dish of the evening. The quality of the Venison, the flavour of the Pasty, together with the accompanying stuffed cabbage leaves, showed English traditional cooking, as interpreted by the Staff House, at its best; it was nice to know that Venison Pasty was one of Pepys favourite dishes. Lord Sandwich, his patron, regularly sent him a haunch.

Vegetables were not commonly eaten at that time. Indeed contemporary medical opinion considered that “they engender wind and melancholy”. 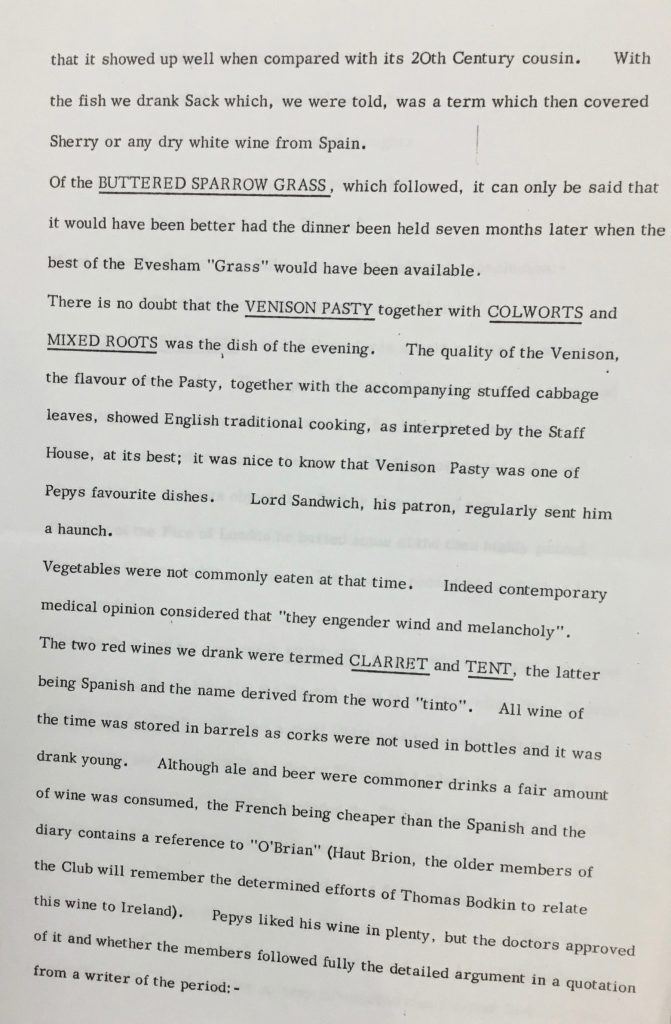 The two red wines we drank were termed CLARRET and TENT, the latter being Spanish and the name derived from the word “tinto”. All wine of the time was stored in barrels as corks were not used in bottles and it was drank young. Although ale and beer were commoner drinks a fair amount of wine was consumed, the French being cheaper than the Spanish and the diary contains a reference to “O’Brian” (Haut Brion, the older members of the Club will remember the determined efforts of Thomas Bodkin to relate this wine to Ireland). Pepys liked his wine in plenty, but the doctors approved of it and whether the members followed fully the detailed argument in a quotation from a writer of the period: –

there is no doubt that they fully approved the ultimate conclusion: – 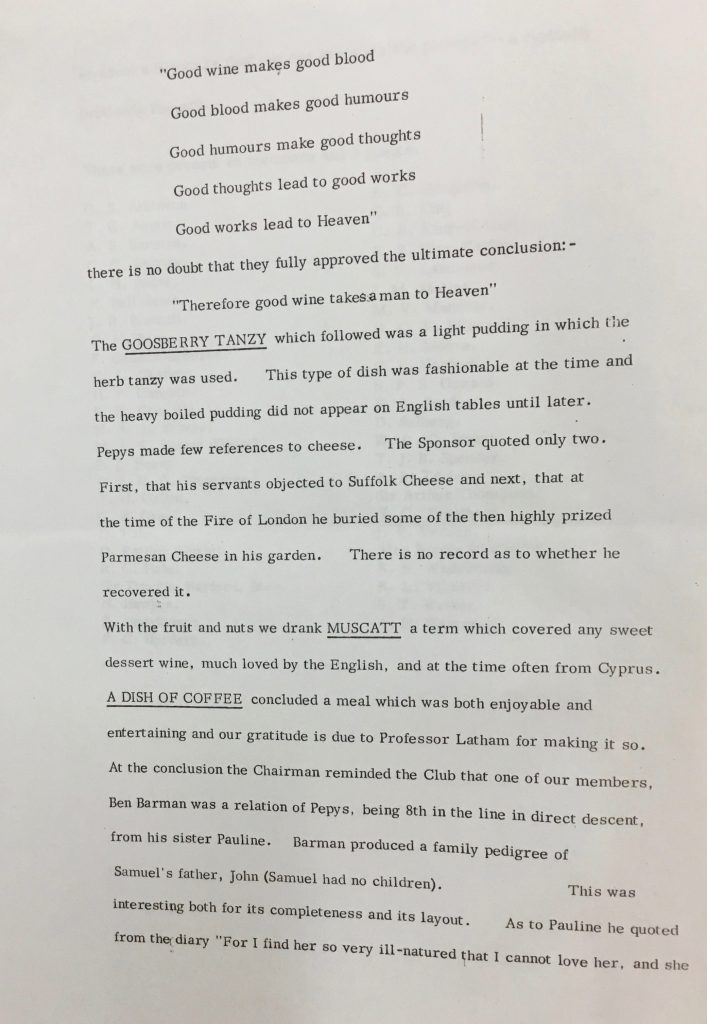 The GOOSBERRY TANZY which followed was a light pudding in which the herb tanzy was used. This type of dish was fashionable at the time and the heavy boiled pudding did not appear on English tables until later. Pepys made few references to CHEESE. The Sponsor quoted only two. First, that his servants objected to Suffolk Cheese and next, that at the time of the Fire of London he buried some of the then highly prized Parmesan Cheese in his garden. There is no record as to whether he recovered it .

With the fruit and nuts we drank MUSCATT a term which covered any sweet dessert wine, much loved by the English, and at the time often from Cyprus. A DISH OF COFFEE concluded a meal which was both enjoyable and entertaining and our gratitude is due to Professor Latham for making it so. At the conclusion the Chairman reminded the Club that one of our members, Ben Barman was a relation of Pepys, being 8th in the line in direct descent, from his sister Pauline. Barman produced a family pedigree of Samuel’s father, John (Samuel had no children), This was interesting both for its completeness and its layout. As to Pauline he quoted from the diary “For I find her so very ill-natured that I cannot love her, and she so cruel a hypocrite that she can cry when she pleases” – a typically brotherly remark.

There were present 46 members and 3 guests. 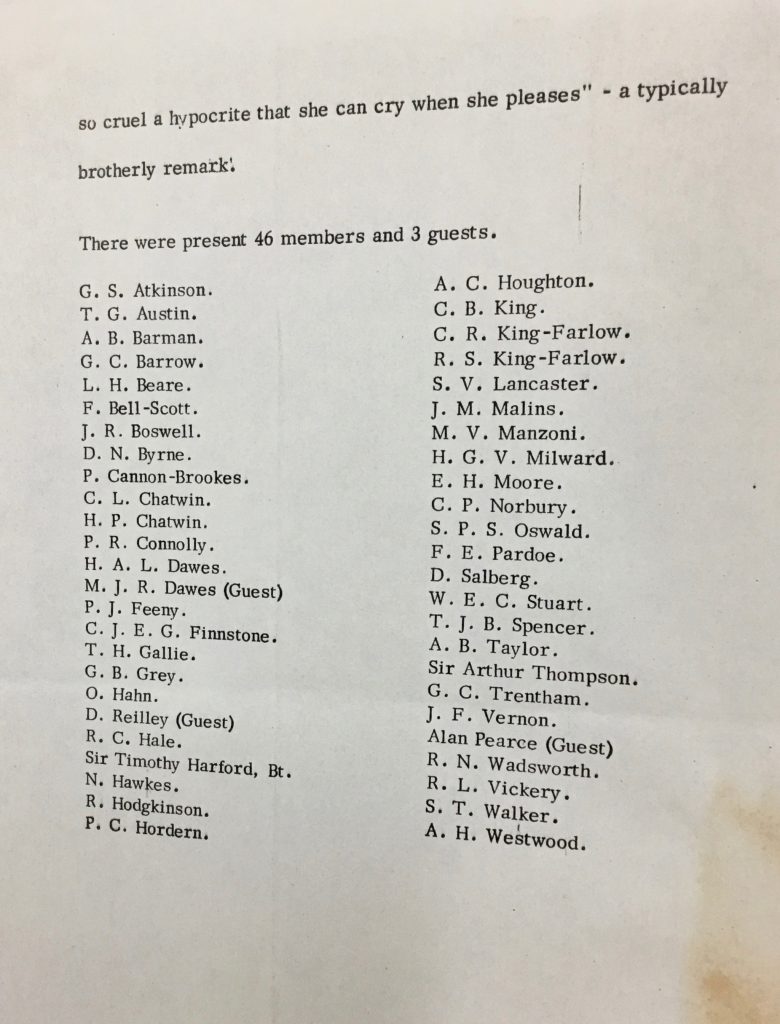