Minutes of a P.G.Wodehouse Dinner

On Wednesday 30 October 1991 the Club gathered at Edgbaston Hall. Some motored down, others came by taximeter cab, but all had taken the precaution of bidding farewell to their womenfolk, for Edgbaston Hall is now a Golf Club, and their womenfolk would not have understood.

“After all, golf is only a game,” said Millicent in “Ordeal by Golf” in ‘The Clicking of Cuthbert’ (1922). ‘Women say these things without thinking.It does not mean that there is any kink in their character. They simply don’t realise what they are saying.‘ I quote Sir Pelham Grenville Wodehouse (1881-1975), to whose world our dinner was devoted.

We Drones ambled into the Golf Club. Beach shimmered forth, bearing a salver of strengthening Gin and French. He had iced lemon squash in reserve for that fearsome head-shrinker, Sir Rodney Glossop, who did not show up – though several members claim to have glimpsed Gussie Fink-Nottle and someone was trying to lisp PSmith. Jeeves was, of course, out of sight. Bertie Wooster’s manservant had better things to_do on such a night – no doubt at the Junior Ganymede. It was Beach who was front of stage as butler at Blandings in Birmingham.

We began with ‘Grade A Soup’, as served at Totleigh Towers. Our soup’s alleged encounter with a pumpkin had not turned it into a golden carriage of gastronomy. Let us face it: only one book is recorded in the library at Blandings, and it was not The Good.Food Guide. So our grub was of the authentic ‘Grade of any Drones’ or Golf Club, and maybe of Alton Towers too. Conversation therefore drifted by association to related topics, such as what had happened to old ‘Catsmeat’ Purbright? Happily, the commentary by our sponsor, Tim Morris was equally authentic. He took us into the Empyrean: which means out of this world. That is too modest a term. How can one grade such sublimity? One may only submit that if The Empress of Blandings and The Pride of Matchingham (noble pigs that they were) had been adjudged at the Shropshire Show on our night, its President would have turned aside and awarded the Grand Rosette to Tim Morris. He made our dinner. 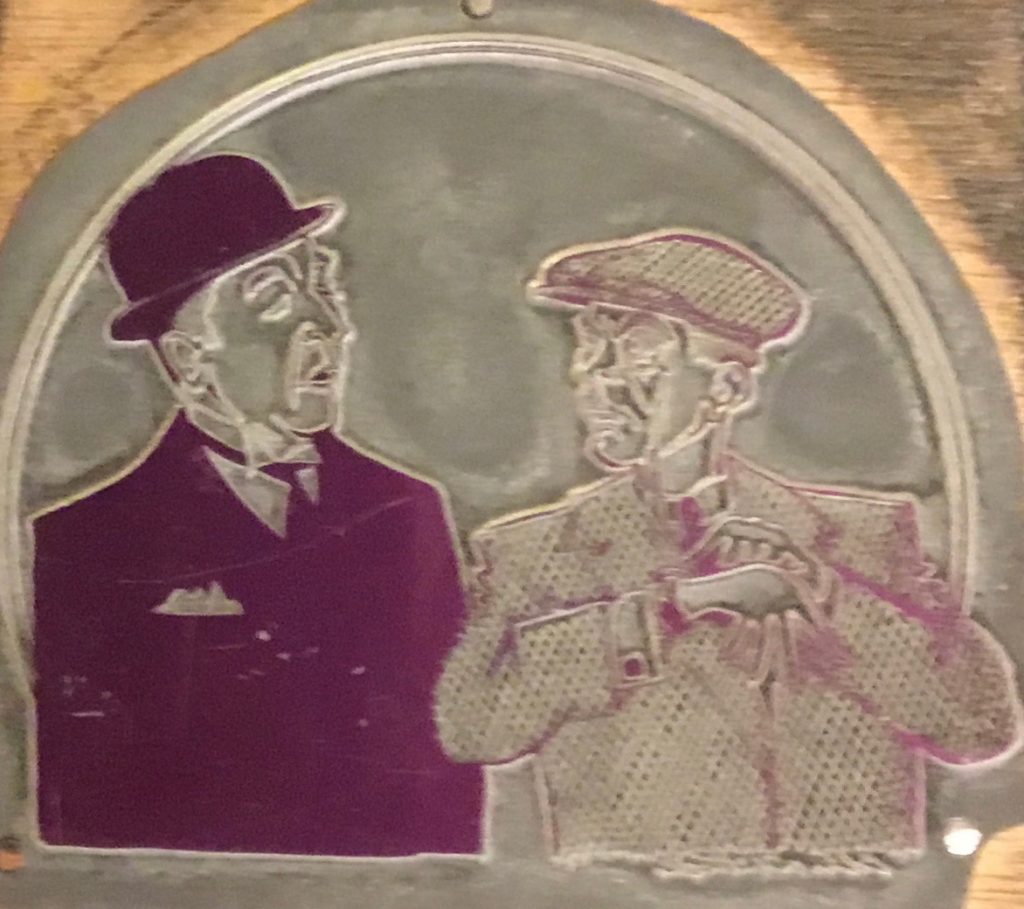 Woodblock used for the P.G.Wodehouse menu

Tim Morris introduced us to the Master, from PGW’s schooling in Dulwich to his end among the Americans. He did not shirk Wodehouse’s broadcasts forthe Germans in 1941, after he had been incarcerated in a lunatic asylum in Upper Silesia: as Wodehouse wrote then: “If this is Upper Silesia, what must Lower Silesia be like?” Soberly, we considered opinions of Hilaire Belloc and others that PGW was the best writer in English of his time; as a critic comparable to Dean Swift, and as a lyricist to our own local scribbler, one William Shakespeare. Some shuffled their feet at this point, but it gave great gusto to our next course:

‘Toothsome Fish’ (actually sole) came with some modest Chablis. ‘Chablis’ was the only French word on the menu: PGW made one of his characters hate Paris: “Full of people talking French… It always seems to me so affected. ” (Big Money, 1931). 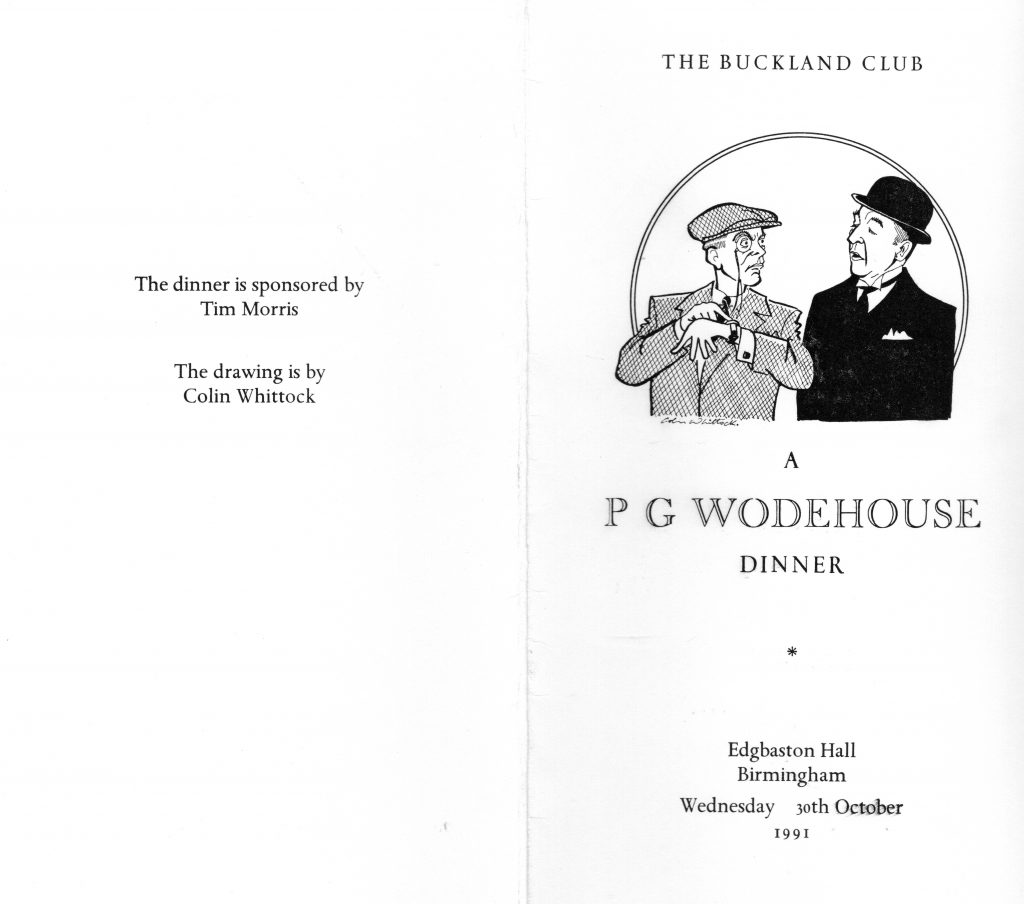 Then, quite unexpected out of the Empyrean, came some strengthening Hungarian Goulash, such as Sir Gregory Parsloe-Parsloe enjoyed in ‘Pigs have Wings’ (1952). The potatoes had a little parsley too, and the wine was -authentic Golf Club Claret.

We also liked Bingo Little‘s favourite pudding, Gooseberry Tart (though itgot him into a spot of matrimonial trouble, too complex to relate here). Itwas succeeded by a welcome savoury: Scotch Woodcock, the key to “The Great Sermon Handicap” in ‘Louder and Funnier’ (1932). Our savoury was handicapped by lacking the criss-crossed anchovies on top, which were surely canonical at Blandings. But the port was unusual. 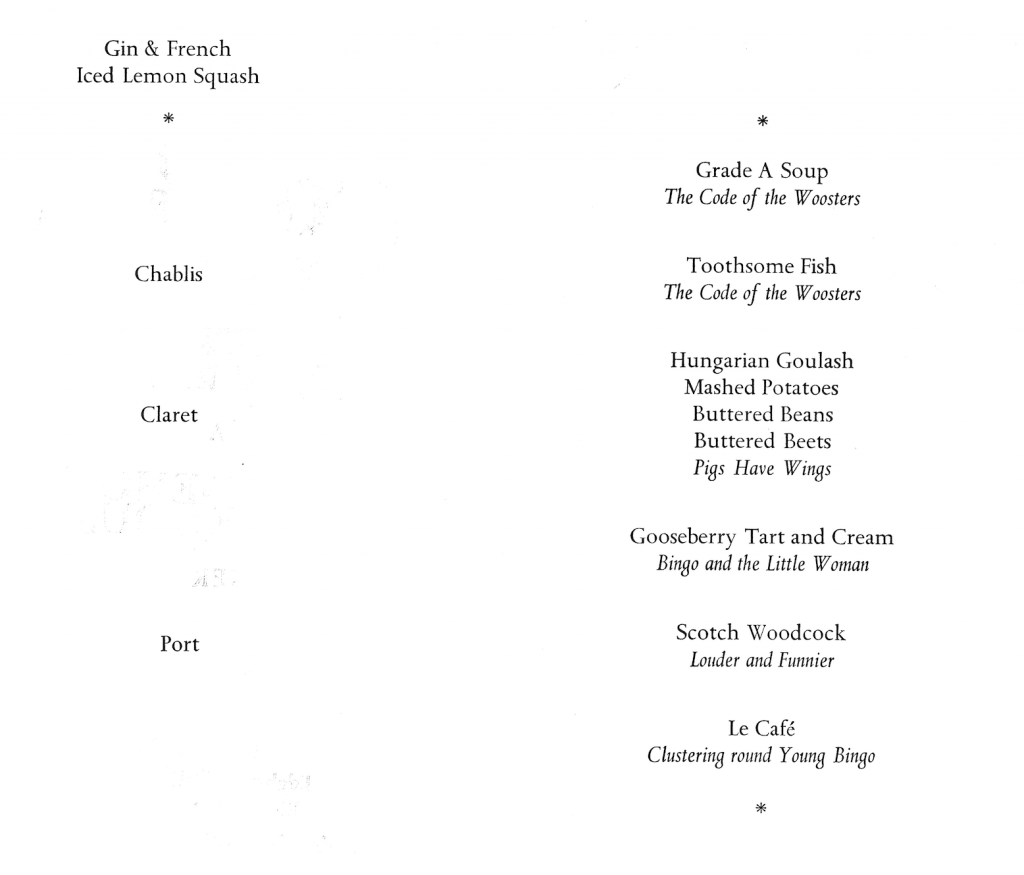 As Uckridge said in “Success Story”, in ‘Nothing Serious’ (1950), “It has frequently happened that a good go at the port at a critical moment has made all the difference to me as a thinking force. The stuff seems to have acted directly on the little grey cells, causing them to flex their muscles and chuck their chests out.” Our port would have made even Lord Emsworth’s secretary chuck her chest out: it was that authentic. Perhaps it came from the Crimea?

So the Buckland Drones ambled home, each neither “as sober as a teetotal Girl Guide” (Thank You Jeeves, 1934), nor “tanked to the uvula” (Frozen Assets, 1964), but all resolved to re-read the seventy books of the Master, of which Tim Morris had given us a wonderful and authentic taste of the Empyrean. In other words, Jeeves would have approved. What more can you ask of the Buckland Club? Yes, you may ask. The answer is that there were present 51 members and 9 guests. Their names are appended.