A Family Dinner in Istanbul 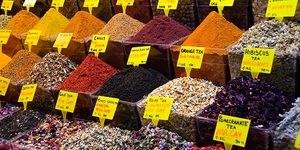 Minutes of a Family Dinner in Istanbul,

aka “What my Grandmother Cooked

The Club met in Staff House of the University of Birmingham on Wednesday 25 October 1995 to eat “What my Grandmother Cooked.” She was grandmother of our sponsor, Berrin Torolsan, and this was a “A Family Dinner in Istanbul.” Some family; some dinner. Grandmother was born on the Danube, when Ottoman sultans still reigned on the Bosphorus. She died 95 years later ruling an old house on the Bosphorus, where Berrin still lives. Grandmother fished. Grandfather gardened, as befits a descendant of the Prophet by way of Seyh Esref Abdullah [d. A.H. 899/1493-4; see M. Süreyya, Sicill-i Osmani, I (Istanbul, 1308/1890) 388-91] and a sequence of sufi divines and dervishes stretching back to when the Ottomans were still rude border emirs. Grandfather’s garden lay beneath the walls of Byzantium, where he grew rare roses and chickens: his walnuts had shells as thin as his hens’ eggs; his artichokes were notorious. 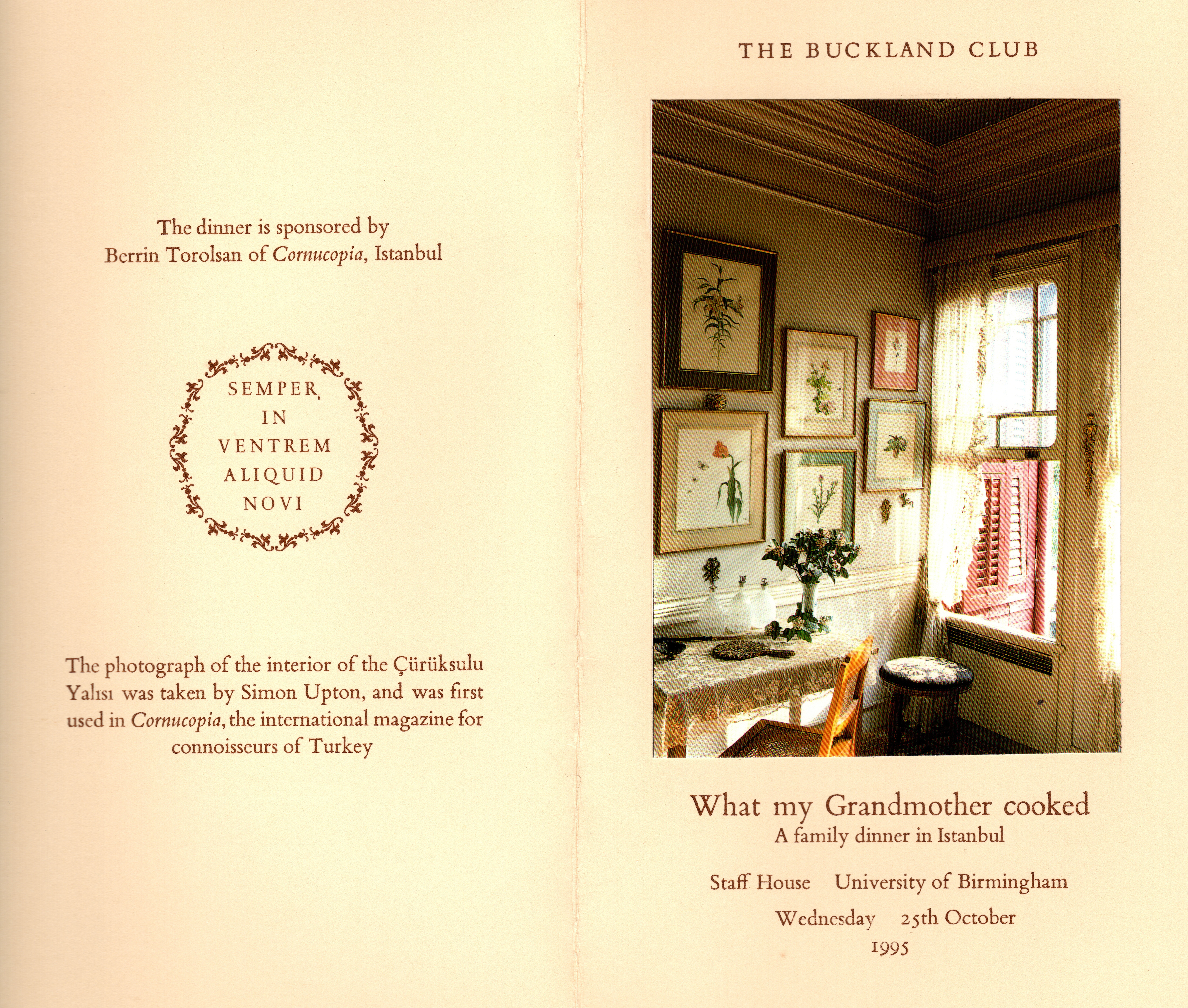 For us Berrin evoked a dinner that Grandmother would have served her family on the Bosphorus between the wars. Berrin’s husband, John Scott, comes from rougher stuff – rude border barons by way of a by-blow of Charles II [see Debrett, s.v. ‘Buccleuch’] so he transported our tripe. Turkish tripe! Tripe piped fresh from Istanbul? This peerless pair rejected the pale guts of England. Quite right. Grandmother and Frank Buckland would have approved: on the question of tripe, authenticity is all. Indeed Berrin and John enchanted us, as they no doubt disconcerted Staff House, by the care with which they provided and presented almost everything we ate, beginning with Mezeler, with which we took with our iced Raki (some said that the sherbet was good too).

The mezes included goat cheese Börek, self-evidently the size of Berrin’s finger; Dolma stuffed with red currents among other things; Turkish Pastrami; and Hamsi – those handy anchovies of Trebizond, which Evliya Çelebi claimed frighten snakes out of their skins and are the most powerful aphrodisiac known to man. Our first women members stood firm and we all sat down to face the tripe. It was the start of a historic night.

I confess that I usually take Iskembe Çorbasi, Turkish tripe soup, lukewarm for breakfast after an all night binge or bus journey, when it is a wonderful reviver. Ours was infinitely more refined, a sort of vichyssoise – it was unusual to taste it hot for once.

Our roast partridges were unusual too in coming not from the bird-flight of the Bosphorus, but from the Ragley shoot, by way of Roger Brown, butcher of Harborne. But our homely fowl were marinaded in pomegranate juice. Berrin has a passion for pomegranates, which in Turkey were also ripe then. We were to meet their singular taste and smell again. Most distinctive of all was a puree of Besiktas aubergines: smoky charred on the outside and creamy inside, a dish which still bears the seal of the sultan’s approval: Hünkârbeyendili. We certainly approved.

The Pilav came separately. So it should have done, for it was majestic: nay mystic, samite, wonderful! The Anatolian rice and lamb’s liver was wrapped up in filo pastry. When we rummaged through this package of surprise, like some Christmas stocking, we found all sorts of goodies from the Spice Bazaar on the Golden Horn: tiny black raisins, pine kernels, cinnamon and, of course, sultanas. 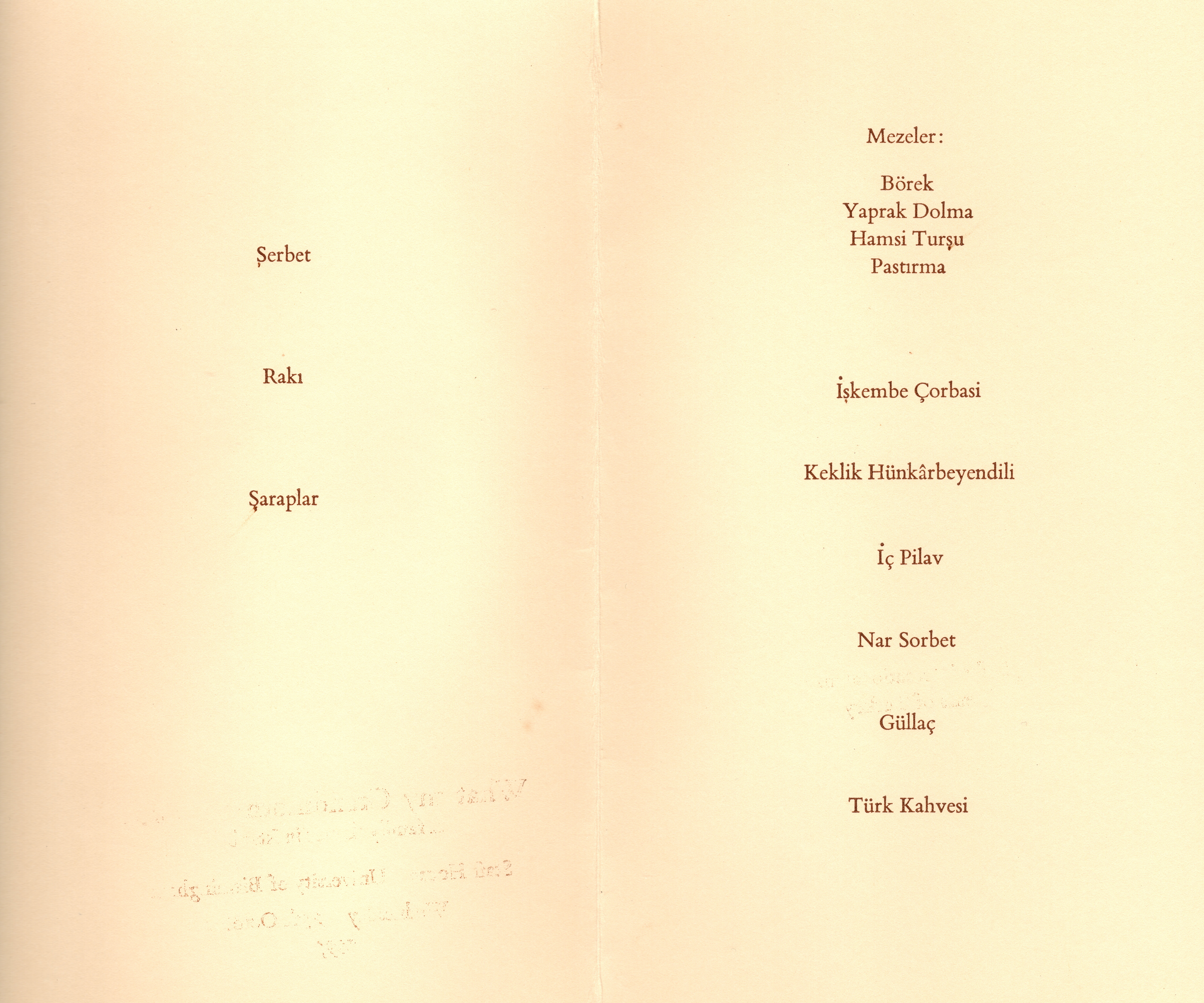 In the days of the Sultanas, if not Grandmother herself, ice was brought down from the glaciers of Mount Olympus above Bursa, to chill sherbets and sorbets. Berrin had to be dissuaded from shipping clear water – ours came courtesy of Severn-Trent by way of a tap – but ice was the one thing that we did not think to import from Bithynia to Birmingham. Berrin brought pomegranates instead. Yet faced with such sublime fruit, the Sorbetière ice machine of Staff House simply collapsed. I do not dare ask how she did it, but Nar Sorbet, our pomegranate ice cream was a dream which one had to disturb by removing precisely two grains and one leaf which Berrin insisted as its garnish. Grandmother told her that pomegranates uplift the soul.

Such specifics and spirit gave the dinner its flavour. We moved on to milk pudding: not nursery stuff, you understand, but Güllaç, sort of pancakes involving much rose water, almonds, pistachios – we now knew the smells of the Spice Bazaar.

In the spirit of Frank Buckland, our Club’s dinners are a hazardous mix of Faith, Hope and Charity: one never knows which virtue will be most called upon on the night. On this night of all, something had to be imperfect. May Allah, who answers for all, be praised that it was only the wine. His Prophet was against it. Some broken bottles drenched God knows how many letters in a postal sorting office in North London; some may still lie in a left luggage box in Leamington Spa; and I fear deliveries of more when Ramadan is over. Our President will answer for all: his story would interest Lord Justice Scott. Shall we say that our wine was interesting too, because we had asked for trouble. For the truth is that if Grandmother had served wine, I am sure that it was not Turkish – anyway she had a barrel of cider in her cellar on the Bosphorus. What she served was coffee. Ours was served with honeyed sweetmeats from Kaya, which is Birmingham’s own Turkish delicatessen on the Bristol Road. But our coffee came orta from no less than Kurukahveci Mehmet Efendi. Just smell him out among the old embassies in Galata. Mehmet Efendi even supplied the art-deco cups in which we drank his coffee. They were redolent of Istanbul in the 1930s.

“A family dinner in Istanbul.” Some family, some dinner. The dinner was superb because of the family. Along with one of the most delicate menu cards which Bill Pardoe has printed for us, members will have been reminded of this magic meeting through the gift by our sponsor and John Scott of their offspring: Cornucopia, a most delicate magazine about Turkey as it was, is, and should be. Berrin took “Can bogazdan gelir: Eating is sustenance to the soul” as her motto for our dinner. Grandmother would surely have approved. 50 Members and 4 Guests certainly did, and I invite our President to approve these minutes too.