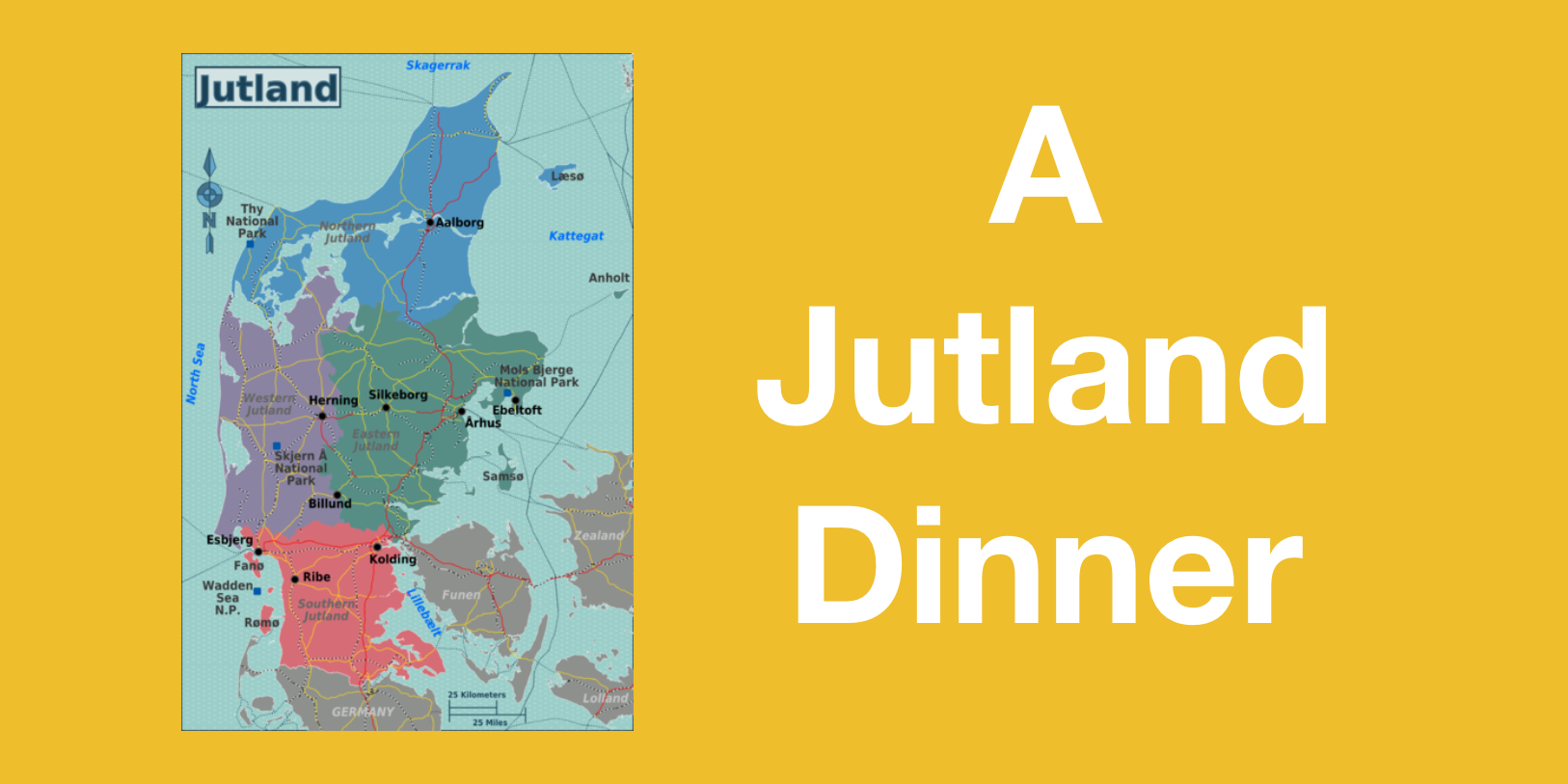 Minutes of a Jutland Dinner

The Club met in the Vauxhall Centre of the University of Aston on Thursday 15 February 1996 for a Jutland Dinner. We found that the Jutes had beaten us to it – by about 1,500 years.These Jutes had arrived on an earlier wave of immigration to Aston – along with some Angles and the odd Saxon. They are now so well dug in that the Pindemadder (or canapés) that faced us are familiar to any browser in Safeway aisle 10, where the Baltic meets Balti. You may find Baltic lumpfish caviar somewhere northwest of the Masala shelf – which is a comparative late-comer round here. Glögg, with which we washed down our Esron and smoked things on rye, was another matter. Glögg is the word: Danish is an expressive language which says it all if you swallow hard. It hardly needs translating except for King Kong, which comes out as ‘Kong King’. 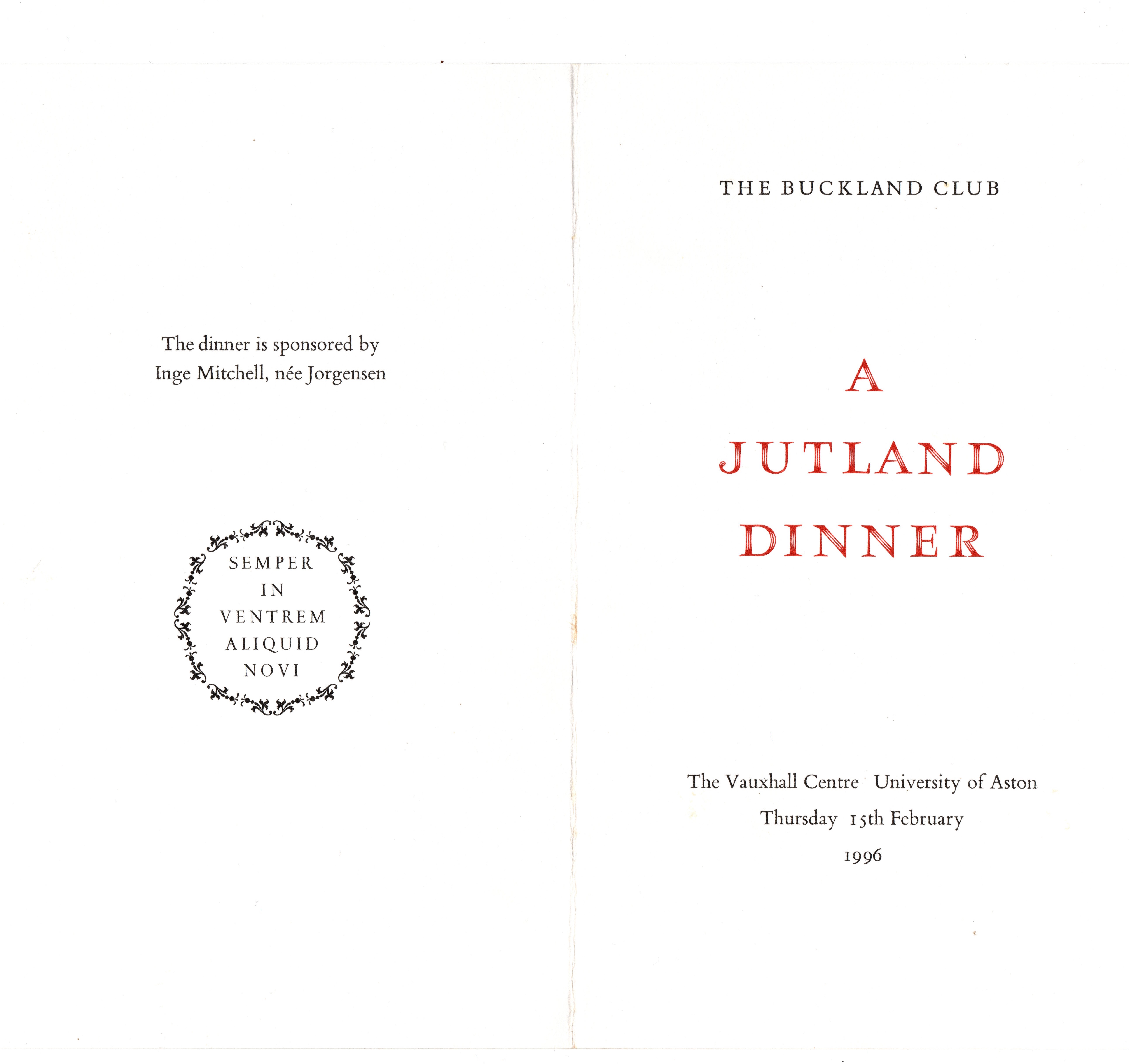 We sat down to hen-soup with Boller, which, just as they sound, are meatballs and dumplings, that leafed round the soup like those mines in the sea which are just past their prime – at first menacing but in fact quite delicious.

Things clarified – well, sort of. Scrolling fast-forward through the Anglo-Jutish Chronicle, it was not until A.D. 1960 that our esteemed member, Michael Brewer, elbowed his way into a party thrown by the DanishFood Centre in Conduit Street, London, and met Inge Jorgensen. The consequence was…

But at this point we were diverted by Adrian the Chef, who brought in a whole cod, such as passeth all understanding, for it eyed us with the secrets of the deep and was all set about with mustard seeds – a noble sight. As Members’ cod pieces were being tailored, some wondered privily who were going to get the cheeky cuts — which are the best. Moving to Safeway aisle 2, there were also boiled eggs, potatoes and beetroot – which sound best in Danish. There were also two kinds of Carlsberg lager, strong and very strong, and a drink called Øl.

I resume the story of Mr Brewer and Miss Jorgensen, now Mrs Mitchell, because our sponsor was the best thing of all. A true Jute of Århus, she had left her cod tormented seas for Africa before she landed up with us in Aston. It was in the Royal Danish Embassy in South Africa that she learned how to boil an egg: 2½ hours softish, for it was ostrich. Inge Mitchell’s achievements in establishing the Danish Food Centres in this country will be recalled with nostalgia by members who knew the one just outside New Street Station. In Birmingham she upheld the Royal Danish Consulate and animated the International Cookery Club.

Next came Gammeldags Aeblekage med Flødeskum with Kirsebaerlikør (cherry liqueurs).  Well, there you are: I would translate as trifle rather than apple pie, but oursponsor sang! Then snaps, kaffe, Kiks and cheeses. The Kiks were fine. The cheeses were four: two yellow, two blue, all colour-coded in Safeway aisle 12.

Chairman, Members. In the name of our patron Frank Buckland, himself a risky follow, our Club is adventurous in its relentless search for authenticity. We risk our meat. Do you remember the Mongol Dinner, when Members (now I can tell you) were passed off with prime British beef instead of horse, because the Shergar we shot was passed unfit for human consumption? Even now I cannot reveal how we got our fermented mare’s milk, except to say that it involved registering one of us with the Staffordshire Mares’ Milk Bank – as an orphaned foal. The point is that each Buckland Dinner has its superlative. Yet if the Mongol Dinner was the dodgiest, the Jutland Dinner cannot yet claim to have been the dullest, for it was redeemed by our wonderful sponsor. 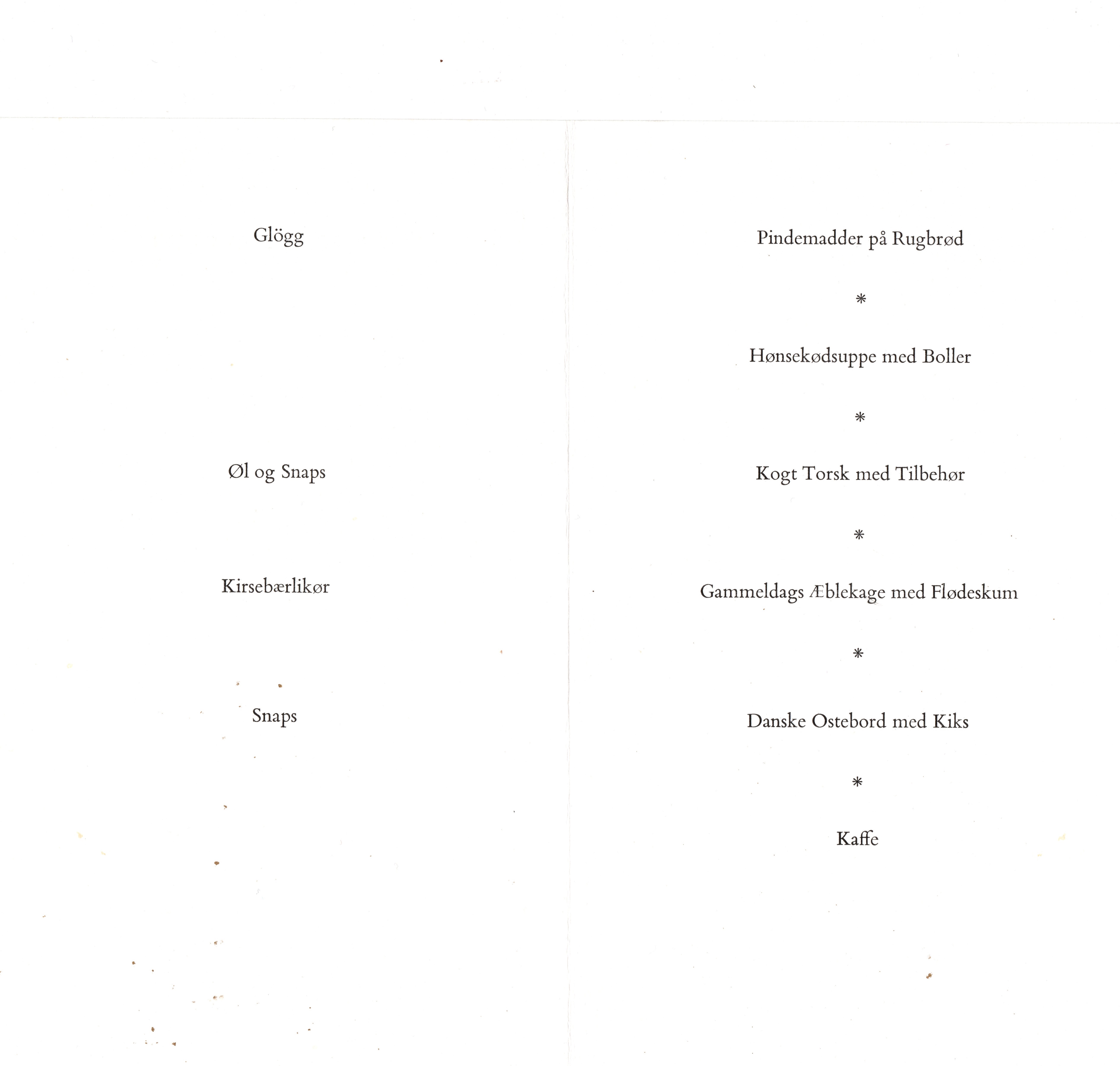 No wonder that Inge Mitchell is the only woman honorary member of the Baltic (not Balti) Exchange. No wonder that her Queen (not Kong) has recently created her a Knight (not Dame) of the Dannebrog.

That night in Aston, Members who fancied themselves as Angles, Saxons (or just Anglo~Saxons) got the authentic Jutes. Yet I have to warn you that Queen Margrethe of Denmark, who is an archaeologist, rules over two further peoples and cuisines, whom the Jutes left behind but whose day is surely to come. Queen Margrethe was also crowned ‘Queen of the Goths and the Wends’ – by any translation, the Wends are Vandals – a decent but deeply misunderstood lot who ended up more in Africa than Aston.

Chairman: how about a Gothic, even a Vandal, Dinner? Aston would do just fine. The Jutland Dinner was attended by … Members and … Guests.