Minutes of the Moroccan Dinner 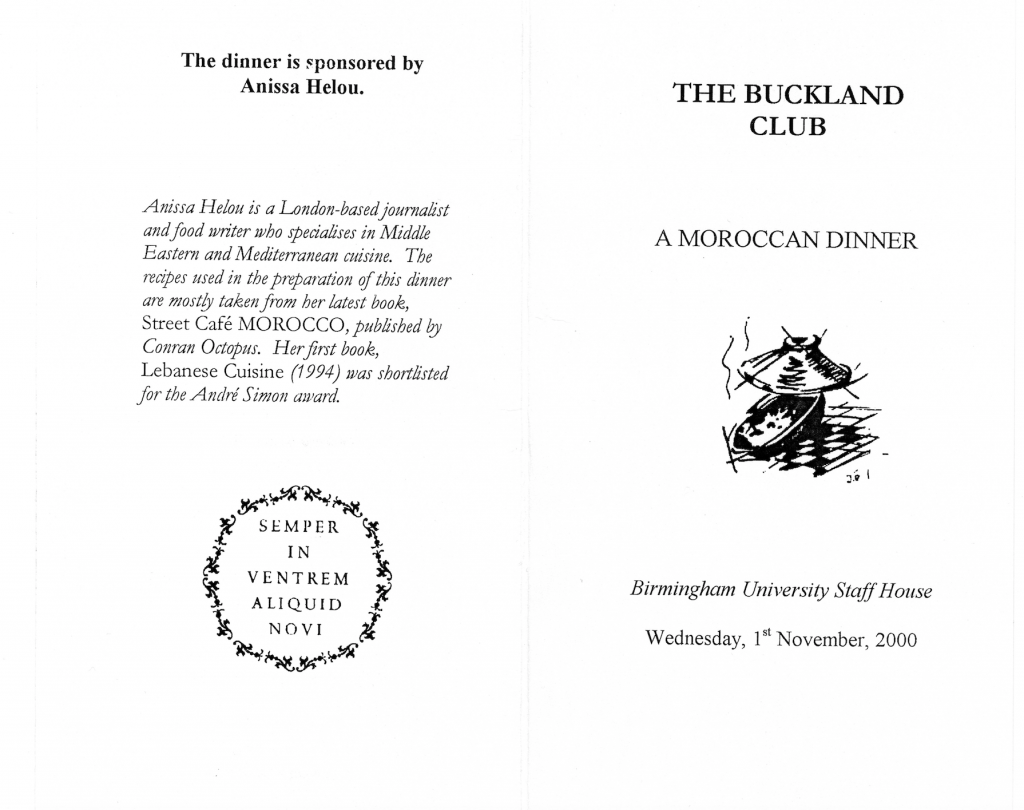 On the 1st November 2000 the Buckland Club decided to risk a Moroccan dinner. Now travellers in that country have in the past returned in a condition near to death and requiring ﬁrst a stomach pump and then sucrose taken by intra venous drip. With this in mind the Buckland considered taking the precaution of sending out an advance scouting party. If it returned alive and healthy, we might proceed with our dinner.We decided to send out our Chairman, and the intrepid Hale set off into the unknown.

But he returned not only healthy, but keen and enthusiastic as ever. Indeed the scouting party was so successful that it became a foraging party and many and varied were the ingredients, foodstuffs and recipes with which he returned. Meanwhile, Harlan Walker who was also committed to the cause found our sponsor, Anissa Helou, an expert in food from North Africa and who has published books on both Lebanese and Moroccan cuisine. Further assistance came from David Hardy to whom we should give the credit of devising the drink with which we began this evening, a combination of sparkling white wine from the Loire, Vouvray in fact, and to add a North African connection, Pomegranate juice. Your Minutes secretary thought this the best drink of the night, and it accompanied as wide a selection of delicious olives as anyone could imagine.

The ﬁrst course of our meal took the form of an interesting looking ﬂan. But, more precisely what could it be? Members knew that they would ﬁnd helpful assistance in our menus. We read the word BISTILLA. Those professing knowledge of Moroccan immediately understood this to mean the olives we had already demolished. The second item on the menu disclosed no meat. But as we masticated our ﬂan surely this must be meat. If so was it fowl or animal?

Here I should explain that the Buckland knew that our sponsor was in our company. We could not fail to see this tall and elegant lady who remained Sphinx-like in both hair-style and communication. While we chewed on in doubt, she remained silent as the Sphinx of Chiops.

Eventually, Anissa Helou came to our rescue. This was the Bistilla and the word meant not olives but pigeon pie. Cooked by a friend of our sponsor who had spent two days in perfecting this ﬁrst course for us and using no less than twenty-ﬁve spices to achieve the ﬂavour.

There then arrived three vegetable dishes which came as something of an eye-opener to those who had not expected the Moroccan enthusiasm for the Vegetable garden. These included Khizü Mrqed [a salad of carrots with chilli and cumin], Za’lük [aubergine and tomato in coriander]. 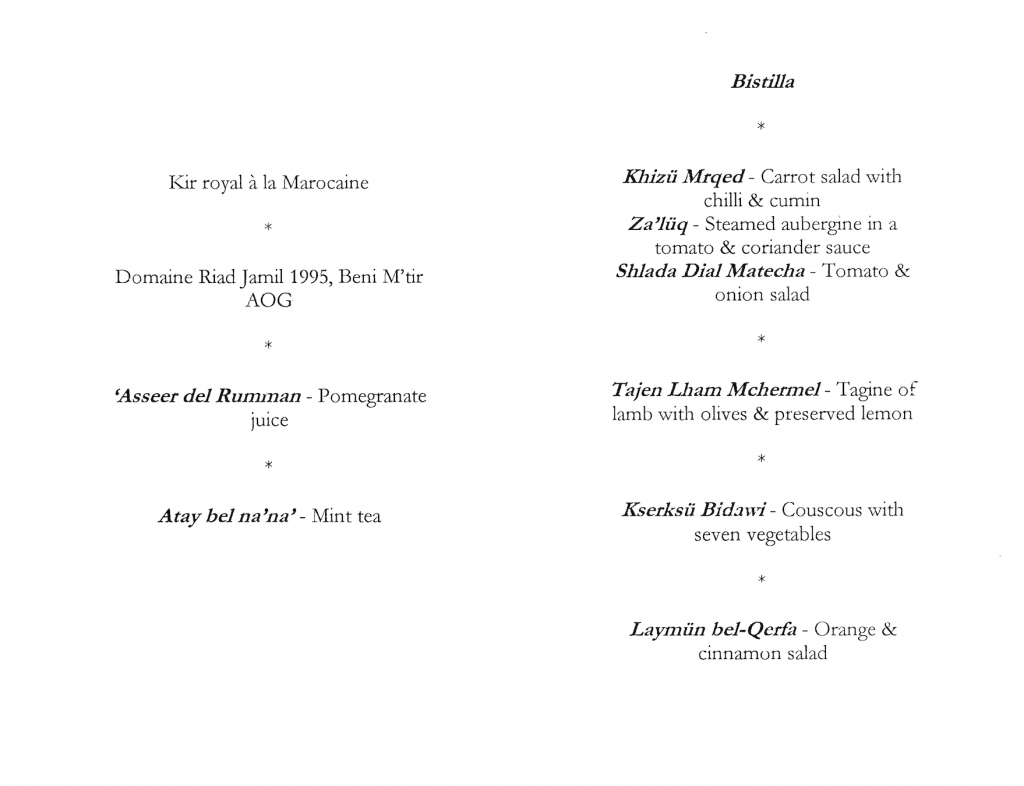 All this was sustaining fare to follow the pigeon pie, and we had yet to attempt a stew and then a fascinating couscous dish. Anissa Helou explained that in Morocco any one of these would be the main, perhaps the only course but we were to enjoy a variety. The next dish was a Tajen [pronounced Tajine] meaning a cooking pot and so it was a stew of lamb with olives [again] and preserved lemon. The olives were both green and black. As for the preserved lemon, we need more information from our Chairman: he had preserved this lemon himself. How he had preserved it is not known. He did warn that its function was more to add decoration than ﬂavour. For thoso who followed this advice, the Tagen was delicious.For those who ate the lemon, a duel with the Chairman: stomach pumps at dawn.

Anissa Helou told us that the ﬁnal and extremely ﬁlling dish was offered in Morocco where the custom is to offer such quantities of food that no one could possibly be left hungry. And so we had couscous, cooked with seven vegetables. Among the ingredients required for this dish were “smem”, which is a sort of vintage butter. Or in other words, rancid butter. Again preserved by the Chairman who had kept it in his cellar [he did not vouchsafe to us the exact vintage so we know not how many years it was in his cellar].

Our sponsor then had to inform us about one of the ingredients of the tomato salad: Argan oil, which is extracted from a fruit which is most attractive to the palate of the local goat. These animals climb the tree and consume the fruit. Then as our sponsor so decorously explained, its seed would be expelled in a natural way so that it might be collected by Moroccan goat maidens and then taken to the mill or press which produces the oil. A rich, not to say a pungent ﬂavour, is thus achieved!

I believe that it was this which came through customs at Marrakesh with our chairman, not exactly smuggled, but at least judiciously concealed. We know not where he concealed this aromatic ingredient [perhaps in his sporran].

There followed a dessert, a refreshing orange and cinnamon salad. A generous hand sprinkled the cinnamon. And to add yet another ﬂavour, we enjoyed mint tea.

With all these courses, came a good red wine, made from sun-ripened Moroccan grapes and similar to some Spanish wine. Ours was Domaine Riad Jamil, 1995 and selected in the hope and belief that it might stand up to the food. It did stand up to the food most commendably, and once again, I can report so did our members. This was a dinner in keeping with our motto and purpose: “Semper in ventrem aliquid novi”.