Minutes of A Robert Burns  Dinner

The Buckland Club decided to celebrate Burns Night at The Staff House Birmingham University on 25th January 2001*. So far as I can see no minutes exist to suggest that the Buckland has participated in this Scottish ritual before, although I am told that Burns Nights have been part of Scottish tradition for two hundred years. With years of experience behind it the Buckland now felt conﬁdent that we would not shrink from whatever strange nutriments we might now be required to consume in honour of Robbie Burns. 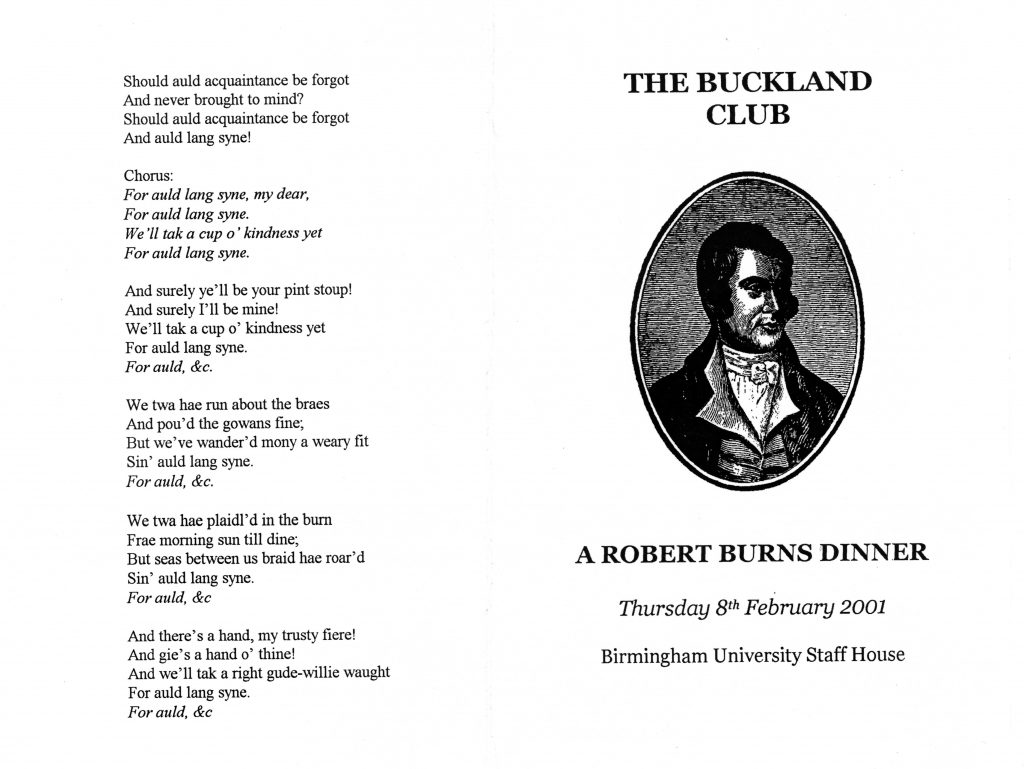 We would not be daunted by the ingredients of the haggis, but participating in strange Scottish antics might be too much for some. As we gathered in the Staff House, one wondered how many might claim sufﬁcient Scottish blood to wear the tartan. However many were so entitled, the fact is that very few knees were exposed. Indeed, many of us had never attended a Burns Night before, and we awaited with curiosity and enthusiasm to learn what would befall us.

Our evening had been designed by that famous Scot, The Laird of Gillott Road, Michael Brewer. The Laird, The Gillott of Gillott himself had selected our piper, our whiskey, haggis neeps and tatties and much more.

The evening began with Malt whisky, taken with smoked salmon and other canapés. But the circumspect had already noted the presence on the tables and the menu of two other malts. And so we were all able warmly to participate in the ritual of piping in the haggis. Our piper was Robbie Lawrie and although he may now live in Halesowen no truer Scot ever “played the pipes”. And with matching gusto, wielding a knife like a Claymore, the Chairman opened the haggis and our feast began. 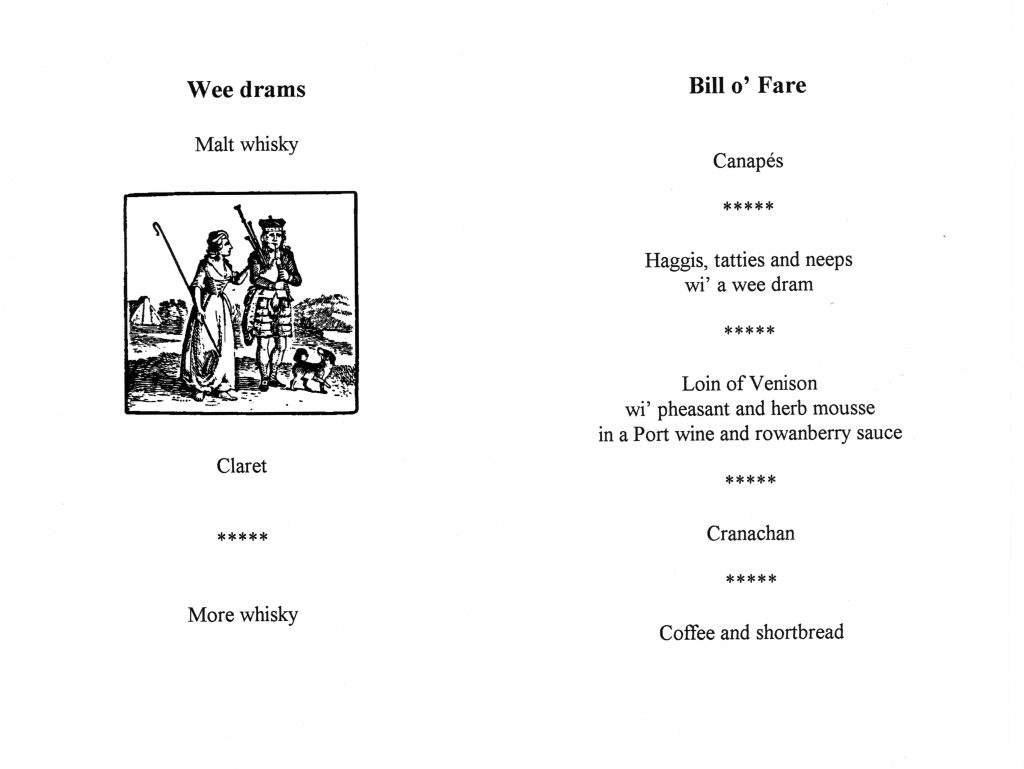 The ode to the haggis was delivered by Alastair Kerr in appropriate Scottish tones. Members were then able to experience the haggis and tatties. These were all good, the haggis rich in flavour and ﬁrm in texture. These were well accompanied by at least one of the whiskies. Later amongst the readings we were to hear of John Barleycorn the King of Grains. We were even told that whisky clears the head. But I fear that this is poetic licence at its most unhelpful. As we partook of the haggis, it was fortunate that at this stage in the evening, we had not yet heard Andrew Morris recite a disgusting tale about the boy who ate himself I including all body parts. At the end of it, when there is a foul and unimaginable mess, included within the boy’s stomach, the tale ends triumphantly : “That’s Haggis”.

But before Andrew Morris entertained us with that, there was the ritual address to the Immortal Memory of Robert Burns. Given for us by a well-known friend of the Buckland, Hamish Aird, who is the Sub-Warden of Radley College. He spoke with knowledge and affection for the Scottish Bard. Poems forgotten, poems famous and poems infamous were discussed and extolled. Burns has been translated into more languages than any other author, save Shakespeare and The Bible.

Did his true Scottish accent make it difﬁcult properly to take in and recall all that he told us, or perhaps it was that whisky. And indeed, much of what followed follows is not very clear in the mind of your minutes secretary. One wonders how the learned Sub-Warden compared his audience with his usual class of sixth formers at Radley. He would not have been surprised by our ladies, now that Radley takes girls in the sixth form. Whisky would be pretty common there too, and he would have been pleased there was no marijuana.

We had loin of venison which was quite delicious, claret to drink with this, and we then heard more readings from the Master. Craig Smith read of the weak and cowring timorous beastie: Oh what a panic is in thy breastie. And then it was time to recall that Robert Burns’ interest in physical pleasures extended beyond those of the table, and it fell to the Laird of Gillott to recite from E E Cummings that poem which Burns would much appreciate including the lines “ May I feel said he”, and “I shall squeal said she!”

But as I have admitted, a full and complete review of the literary presentation is beyond the powers of the Minutes Secretary. I am reminded of those Lakeland poets, Coleridge and Wordsworth whose deﬁnition of poetry was Emotion recollected in Tranquillity. Burns Night is Intoxication recollected with difﬁculty.

Burns would win the Just a Minute prize for the least promising subject on which to write a short ode: This must surely be won by the title : “ To a louse on a lady’s bonnet on seeing one at church.” Professor Bryer whose Scottish accent was easier to understand than some, regaled us with this work and complied with the custom of Burns Nights by proposing the health of the lassies.Tessa Sidey responded most graciously in post-feminist style and introduced the Crannachan. This is a delightful mixture of oatmeal, cream raspberries and the inevitable whisky. We also had Scottish cheeses and eventually coffee and shortbread. I fear that at this stage there was even more whisky because the poor Sassenachs needed to lose their inhibitions and watch or participate in Scottish dancing or at least the Auld Lang Syne. This most famous of all Burns songs ended one of the happiest Buckland evenings. We learnt more about the poet, and perhaps even about how to enjoy ourselves. He would have been proud.

There were present … members and … guests.

*The minutes refer to the date of the dinner as being 25th January 2001 – traditionally Burns Night. This is in conflict with Roger Hale’s menu which states that the date was 8th February 2001. My guess is that the correct date is the latter. This was probably due to a short supply of pipers at the end of January. It would also explain why it was called A Robert Burns Dinner, rather than A Burns Night Dinner. More information to follow…

The mystery is solved…

This information sent to members by Secretary Roger Wood. 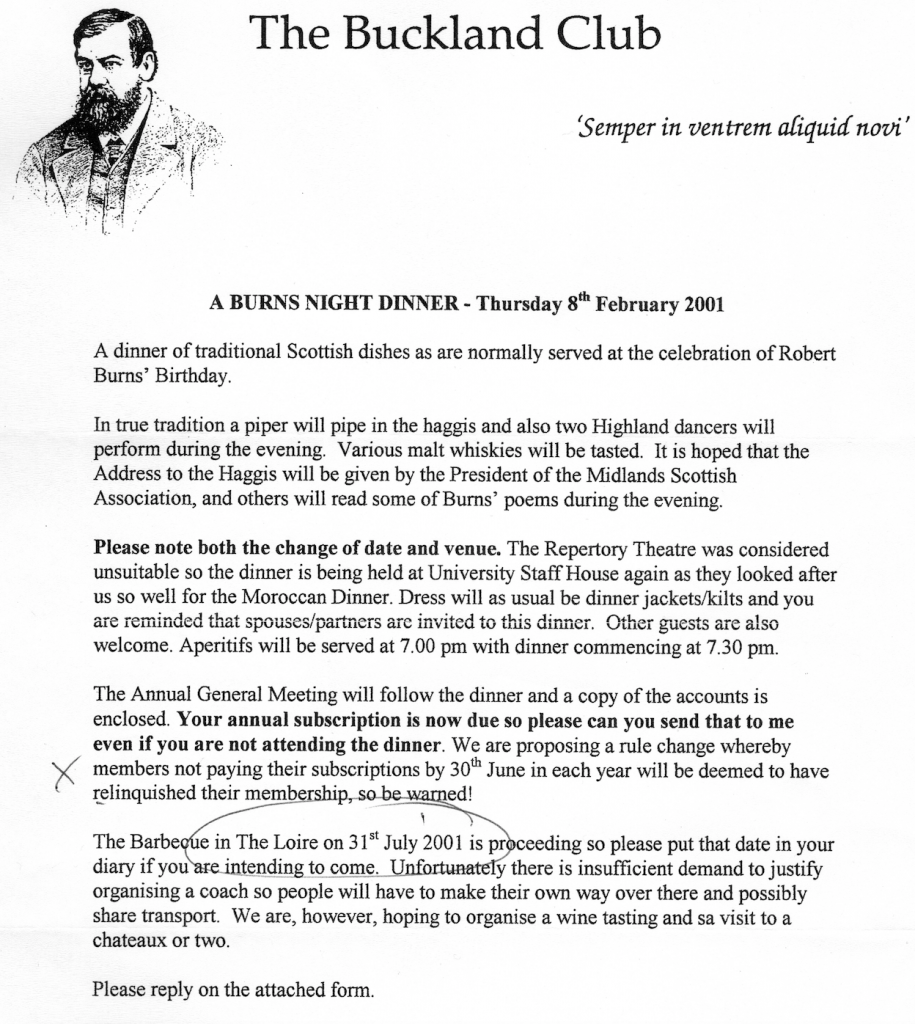