Invitation to the Parsee Dinner from Secretary Roger Wood. 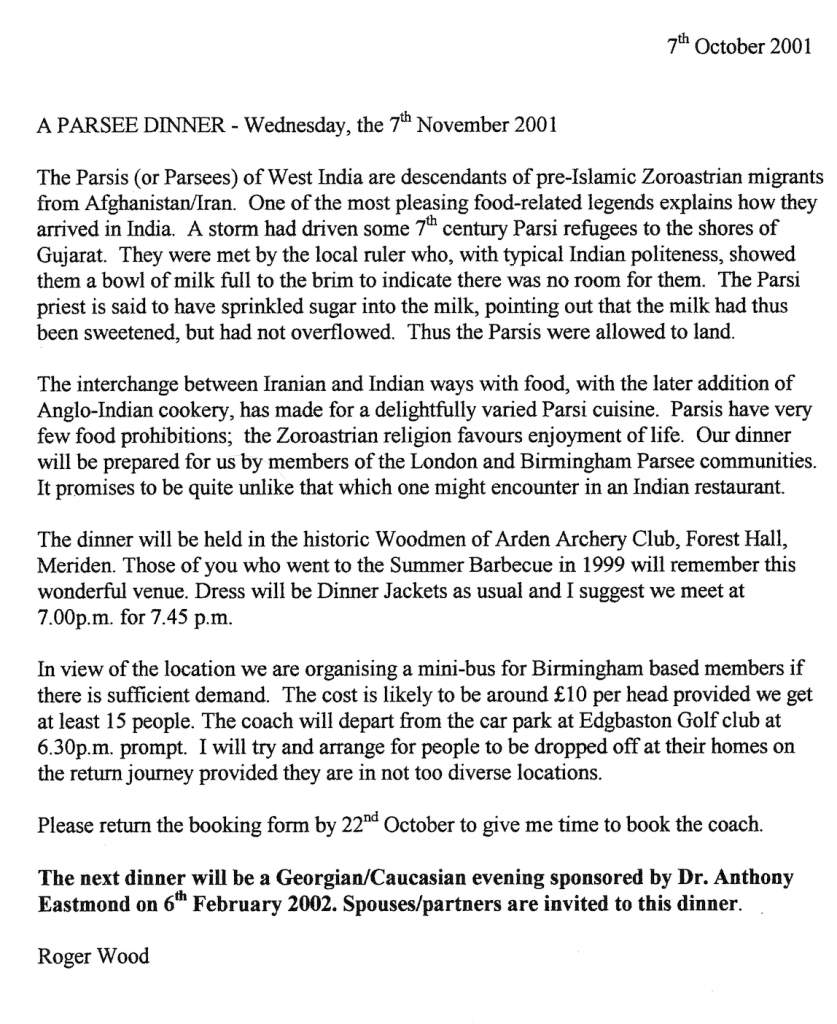 The Parsees, as a race, are great travellers. Their story began in Persia around 700 AD. From there they travelled to the most distant corners of the earth. At the Buckland we too are travellers. Sometimes its the staff house and sometimes Aston. But for the Parsee Dinner we reached deep into the very centre of England, and found ourselves at Forest Hall Meriden, an archery and sporting club known for successful summer events.

Some members navigated for themselves in cars. Others, less conﬁdent, were delighted tocome by the Buckland Bus. The bus conductor was the High Sheriff herself. Surely she was fulﬁlling some medieval duty to promote archery amongst worthy yeoman of theborough. The journey was uneventful until we reached our destination. The bus was amoderate 9 feet in width. The drive 9 feet one. But outside the rain roared and inside theworthy yeomen watched and worried. Would their feathers get too wet. But the bus driver knew his duty and inched forward to the door.

Other members were already within. There was a welcoming ﬁre in the hall and we went on to an inner room where this surprising beverage Falooda was provided to us.

Now this was a complicated concoction. To a simpleton it was a raspberry milkshake with strawberry ice-cream. But this would omit the vermicelli, and seeds of the fruit tukmooria, whose outer body swells and softens to give the appearance and texture of frogspawn. No one can speak of its ﬂavour. And there were samosas, and delicious lamb kebabs.

The party was going well, but friends of the Chairman may have noted unaccustomed anxiety in his demeanour. The truth was that the travelling Sponsor, Rusi Dalal had not arrived. Rusi Dalal is by profession a Consulting Engineer, practising in London. In treacherous weather he was having difﬁculty ﬁnding Forest Hall. We were given yetmore Falooda. Now I am sure that our sponsor, the engineer, had played no part in thedesign of this drink. The intention had been to ingest same through a straw. But therewere inevitable engineering difﬁculties here, involving the frogspawn and vennicelliblocking the straw. Buckland members resorted to slurping noisily through the ice-cream. While attempting this, suddenly the doors opened and into the hall came our Sponsor Mr Dalal and more supporting Parsees. They were delighted to be with us, keen to expound their race, religion, culture and cuisine. All members were inspired by their charm and the eloquence of our Sponsor. One of the most charming Parsee characteristics is enthusiasm, and especially for their close connections and happy relations with the British. They have this wonderful ability to make the most of and enjoy the host community while retaining their own traditions.

We learned that the Parsees left Persia when Islam became somewhat aggressive and they emigrated as a race to India on the Western seaboard. There, the indigenous inhabitants were willing to let them stay, according to our sponsor on the condition that the Parsees did not marry their women. The Parsees had females of their own and judging by those ladies who accompanied our sponsor, so delightful that this condition could be accepted easily enough. As a result our Sponsor told us that a close study would show that every Parsee has the same distinctive nose and by this organ they can be recognized worldwide. They prospered and they travelled. They maintained their religion with its roots in Zoroastrianism. The Parsees welcomed the British Raj when it arrived in India. They saw and seized the opportunity for trade. They spread throughout the Empire to Africa and Australia. Wherever they went they maintained their tradition for exceptional gastronomy. Wherever possible they would cultivate the spices and vegetables which they love. 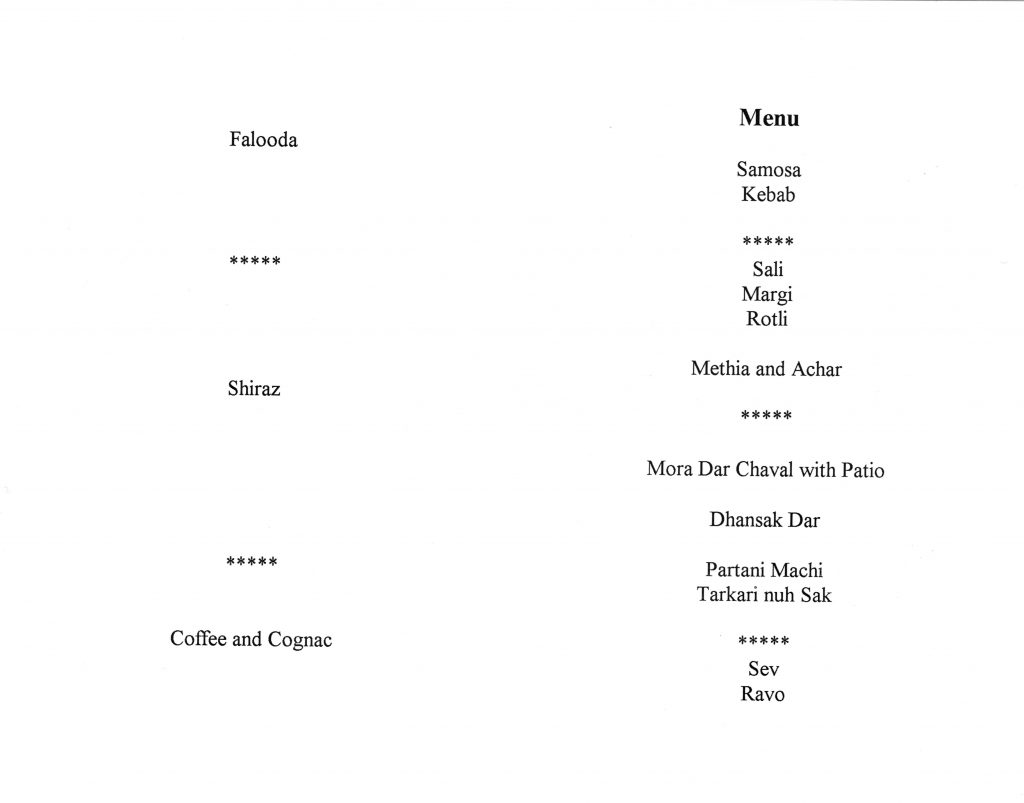 Our feast now began with many good vegetables, including in the ﬁrst course a tiny aubergine which the Parsees grow and appreciate. Also we had Sali: potato sticks, Margi,which is chicken and Rotli a form of Chapati. These were prepared with traditional spices such as cardamon and turmeric.

Our sponsor explained that he wanted to give us many of the ﬂavours of his cuisine, so that we were going to enjoy a wider range than we would normally expect even at a banquet. Our menu promised us Mora Dar Chaval with Patio. Some members studied these words too carefully. We learnt that Dar means lentils; Patio is the spiced tomato sauce accompanying this meat dish. If that was right, then what was that Chaval? I can reassure any anxious Buckland members that the etymology of Chaval with an A has in its origin nothing remotely equine. It may be that the Chaval was the white rice. Our Sponsor said that the White rice is traditionally reserved by the Parsee for auspicious occasions. There  was also Dhansak Dar : Meat with brown rice and lentils. Our Sponsor recounted the Parsee enthusiasm for cricket. In 1882 and 1886 the Indian National cricket team were all Parsee. He also told us that this Dhansak with brown rice was the equivalent of a Sunday Roast in Parsee society. I can say that after such a Sunday luncheon the cricket team who were ﬁelding would have had to give up.

These meat dishes were to be served with pickles. Methia [mango pickle] and Achar an exceptionally powerful variety. For these, our sponsor gave us a careful health warning. The Parsees love hot spices and not every Buckland member would have the asbestos palate required for complete participation. So our sponsor had arranged: the hottest were to be kept to the left of the table from which we were to help ourselves. To the rightwere the alternative milder pickles. Now the acoustic in Forest Hall is not of the best. Forthose at the front of the hall, they heard the warning and all was well. But those at therear spluttered and called for the ﬁre brigade.

In a complete Parsee feast one would expect to include boiled eggs [which we decided to take as read] and ﬁsh, which we did have and much enjoyed. For us it was a streamed ﬁsh called Partani Machi and cooked with green coconut and wrapped in non-ediblepaper, coriander and more chutney.

After these substantial dishes there were Desserts as follows: Sev :Verrnicelli with almonds and currants. Almonds and currants were ingredients of the other pudding, Ravo a form of semolina with cloves and cinnamon. 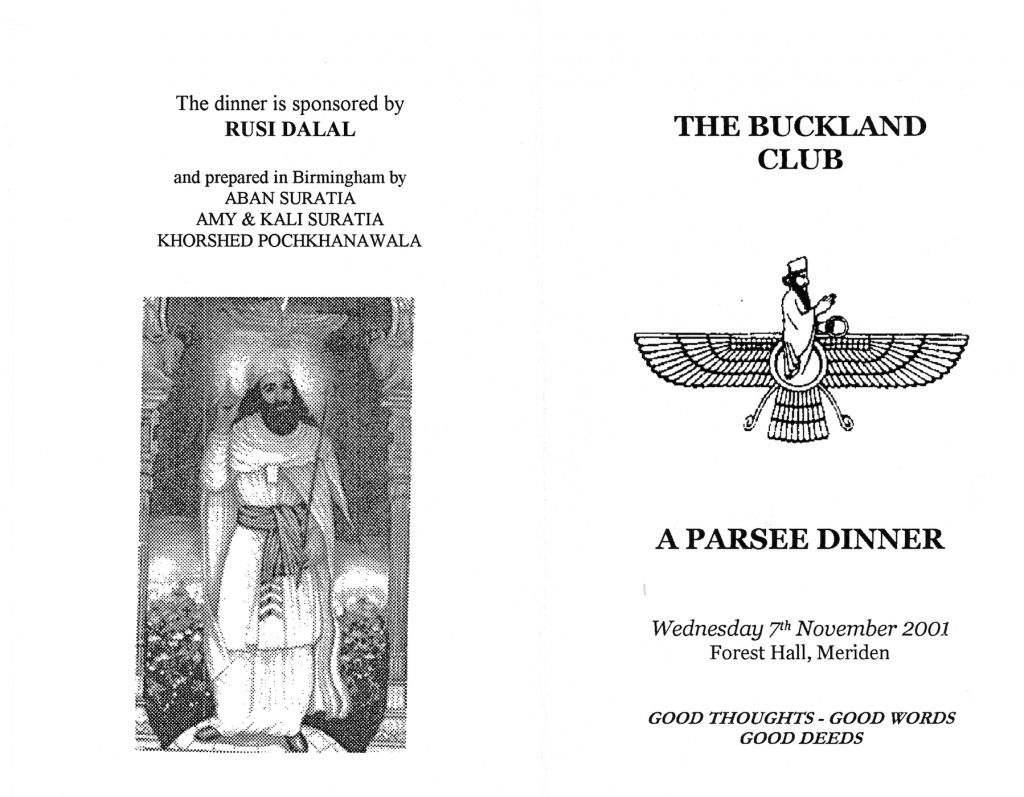 Thus ended a ﬁne feast, but the interest of the evening continued as our sponsor was able to tell us more and show photographs and exhibits to tell us more about the Parsees. The dinner had beneﬁted from some help and advice as to the menu from Cyrus Todewaller, who is a friend of our sponsor. He runs Parsee restaurants in London including the Cafe Spice Namaste. And all of this feast had been prepared by the generous and enthusiastic local Parsees, Aban Suratia, Amy and Kali Suratia and Khorshed Pochkhanawala. They attended as our guests, or perhaps they were our hosts. For members of the Buckland Club, we thoroughly enjoyed their most interesting cooking. There were present 75 people, including 7 guests.