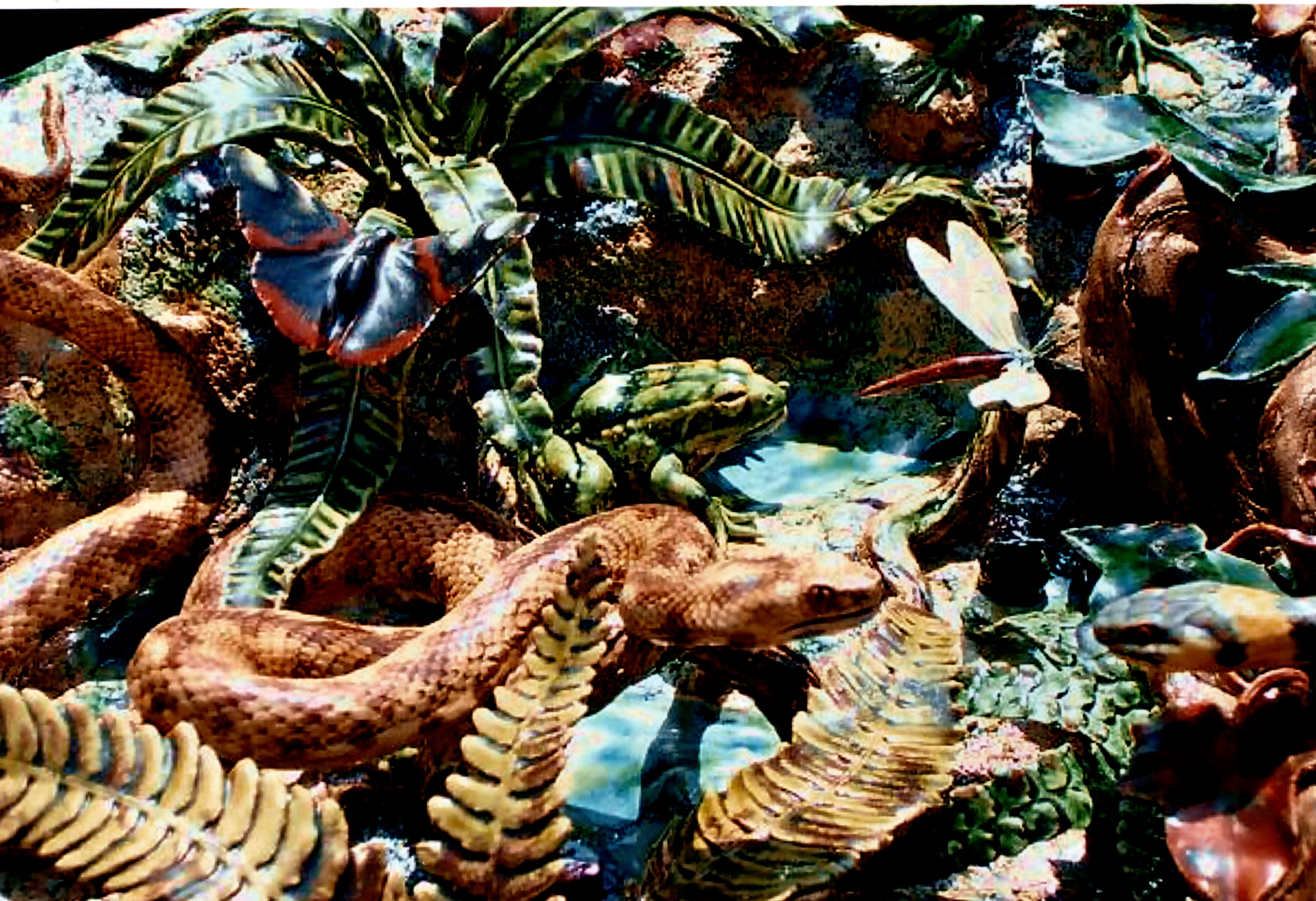 In the past The Buckland Club has travelled to the Loire and enjoyed a huge and extraordinary lunch, but on the 7th April 2005 we arranged for the Loire to come to us.The Loire ﬂowed through the verdant ﬁelds of Warwickshire to the Archery Club at Meriden. Geoffrey Luff and his wife Joy were our chefs, assisted by skilled members of the Club Committee. 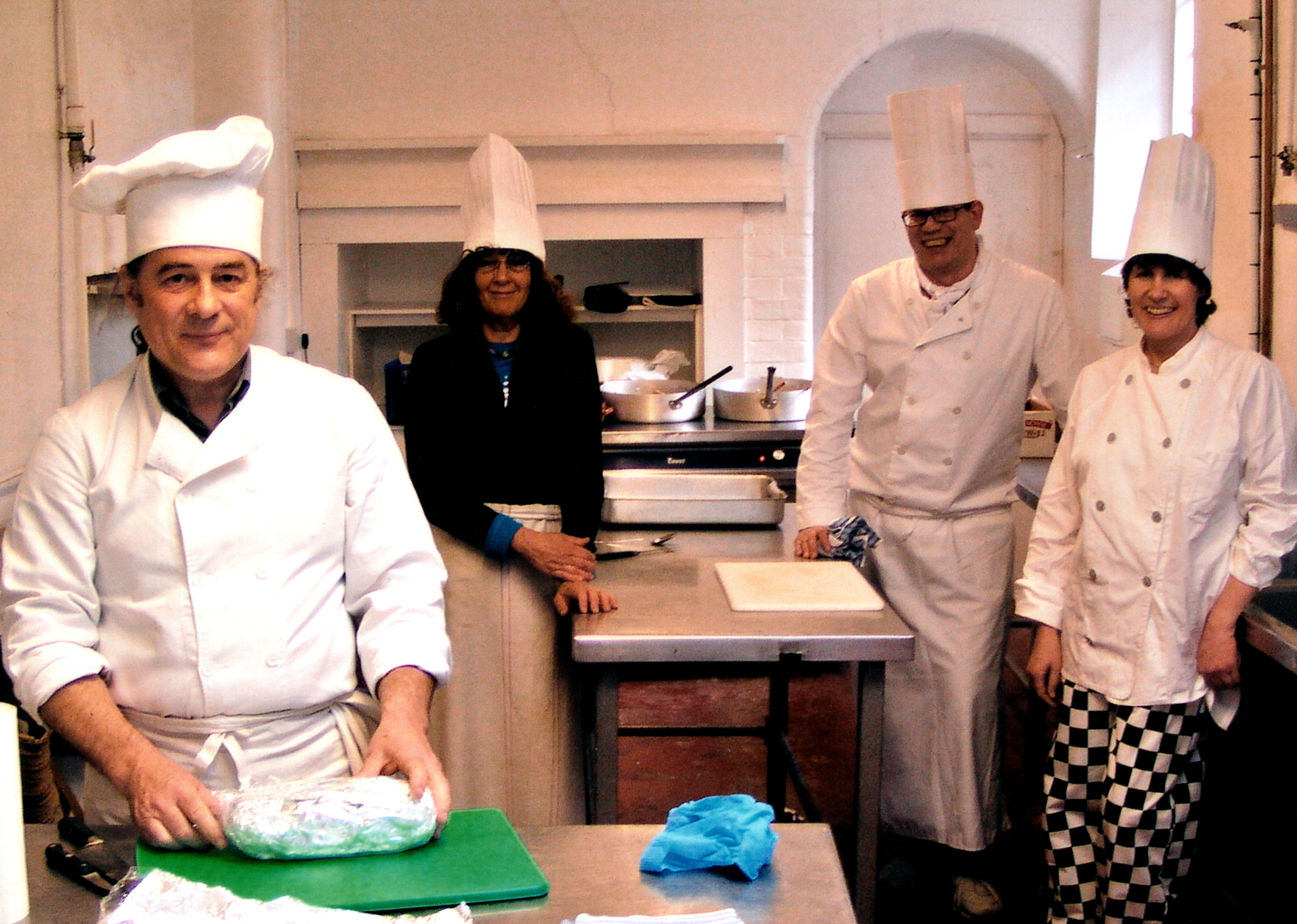 Many members came to Meriden by coach. These included David Hardy who was observed to be in studious mode, obviously preparing for an extra lesson at Radley. On arrival, the proceedings began with a sparkling wine of exceptional quality. This was Vouvray made by the champagne method, of 1997 vintage and rich in honey ﬂavour. We now realized that David Hardy had been persuaded to introduce these Loire wines for us. The urgent prep which he had been doing on the coach came to life and he inspired us with his enthusiasm and knowledge of every hillside and grape variety. 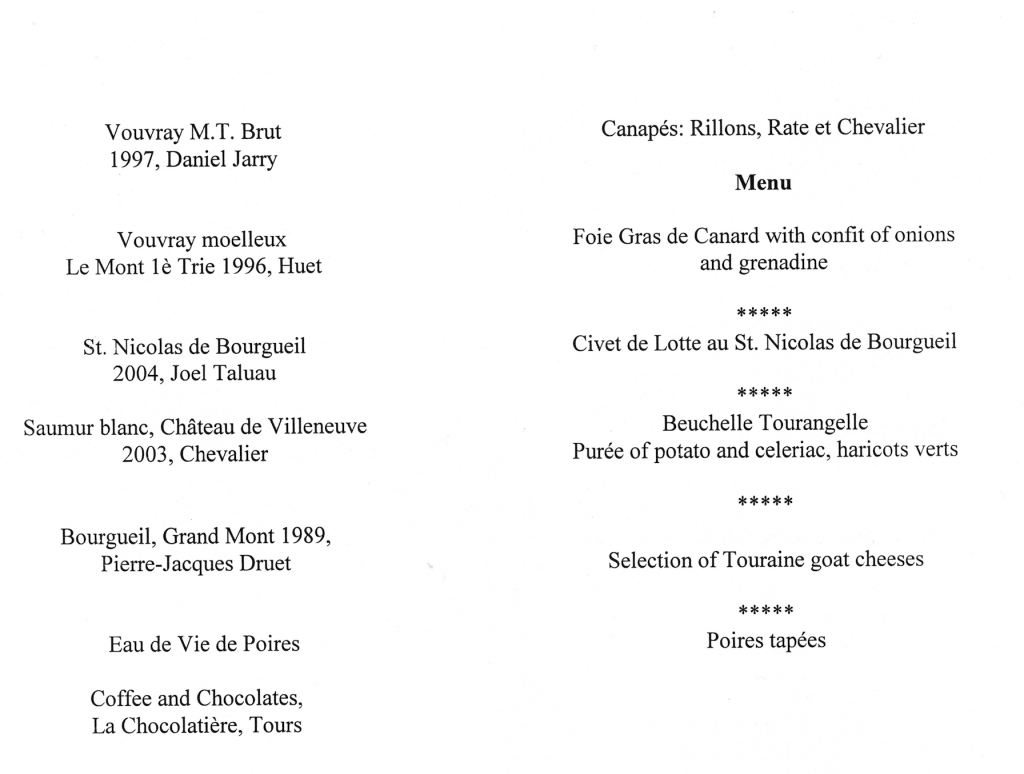 While we studied the Vouvray, we were encouraged to make a start on canape’s. It was as well for the squeamish member to enjoy a glass or two before he did so. The following maxim should apply to Le Diner Tourrainois: “comprehensive knowledge about the wine is always beneﬁcial. Of the food, maintain blissful ignorance.” Our canapés included pork cooked in its own fat, pigs spleen and ﬁnally an item which your Minutes Secretary has been unable precisely to trace. Despite cross-examination of the Chairman the specimen can only be described as “ gland or organ within the porcine body of uncertain purpose or location”.

We moved to the tables where the ﬁrst course was Foire Gras, ducks liver poached in some sort of nappy and served with a conﬁt of onions and grenadine made by Joy Luff. This foie gras was quite superb and deserved the applause it received. 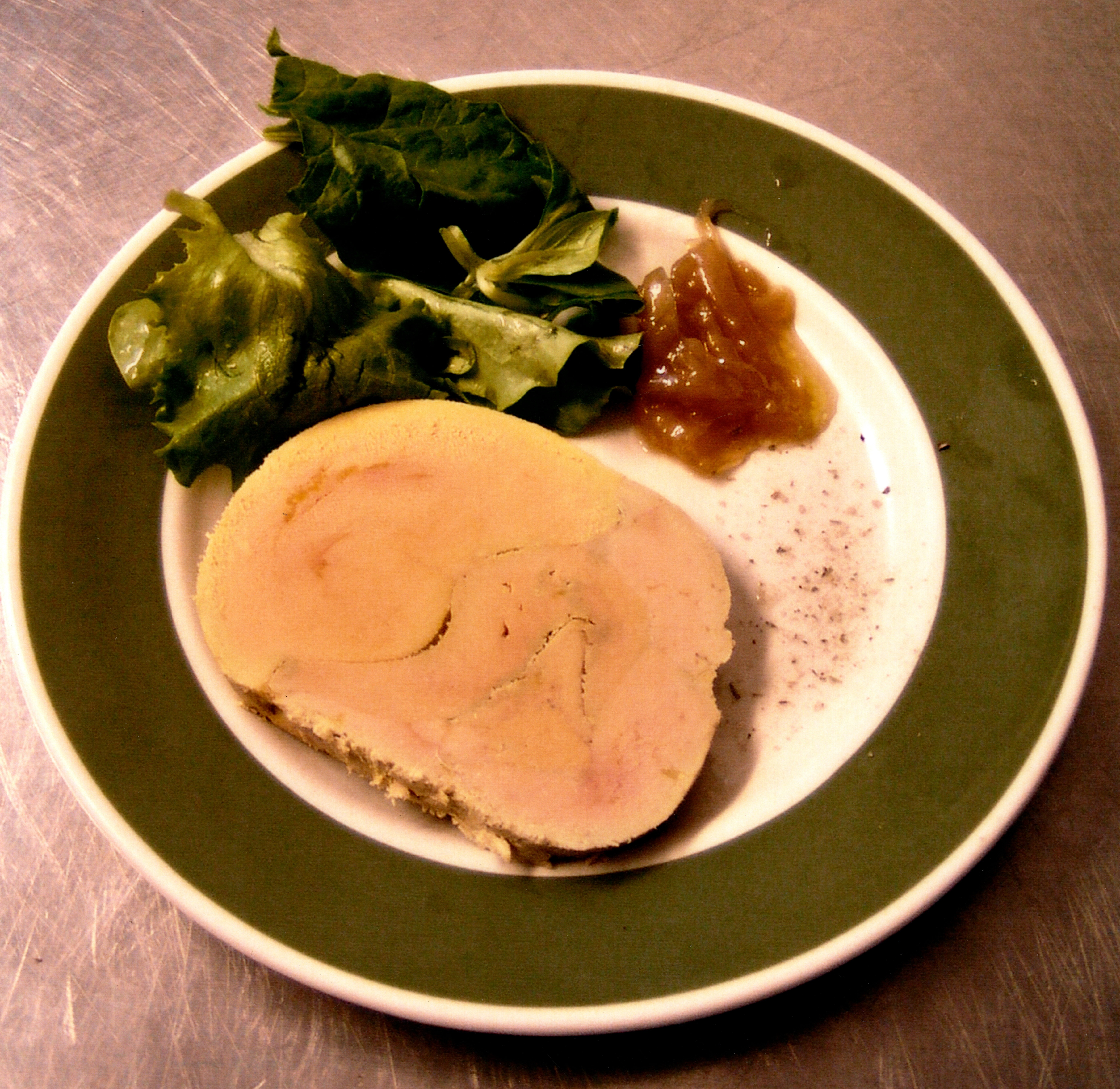 The flavours were complemented by a sweet, still Vouvray “moelleux”. Moelleux refers to the ﬂavours of melons. The wine was made by Gaston Huet who was the local mayor at the time when the SNCF proposed a cutting through the vineyards to take the TGV from Paris to Tours. The mayor invoked an ancient criminal offence : disturbing the roots of old vines. Instead of the cutting a tunnel was constructed at huge expense. The SNCF were then required tolay the lines on rubber sleepers to preserve these invaluable roots. The risk of premature fermentation was said to be another possible result of fast trains running close to old cellars. But the most expensive few miles of track ever laid have allowed Huet to maintain a standard of wine-making which the Buckland fully appreciated.

The next course was monkﬁsh: a plan to eat Loire eels which have the lovely name Matelotes d’Anguille proved impossible since the eels were out of season. We drank a red wine with this ﬁsh course, indeed the same Borgeuil as that in which it had been poached. The wine was young and served cool. The Chairman explained that in the opinion of our chef, Geoffrey Luff this was a very simple dish, the ﬁsh being ﬁrst deboned, then slowly poached, after that it was strained, then it was reduced, the seasoning adjusted and then gentle cooking continued with the caramalised onions. The process had commenced at 9.30 in the morning so that the chefs had plenty of time to work on and to perfect this “very simple” dish. 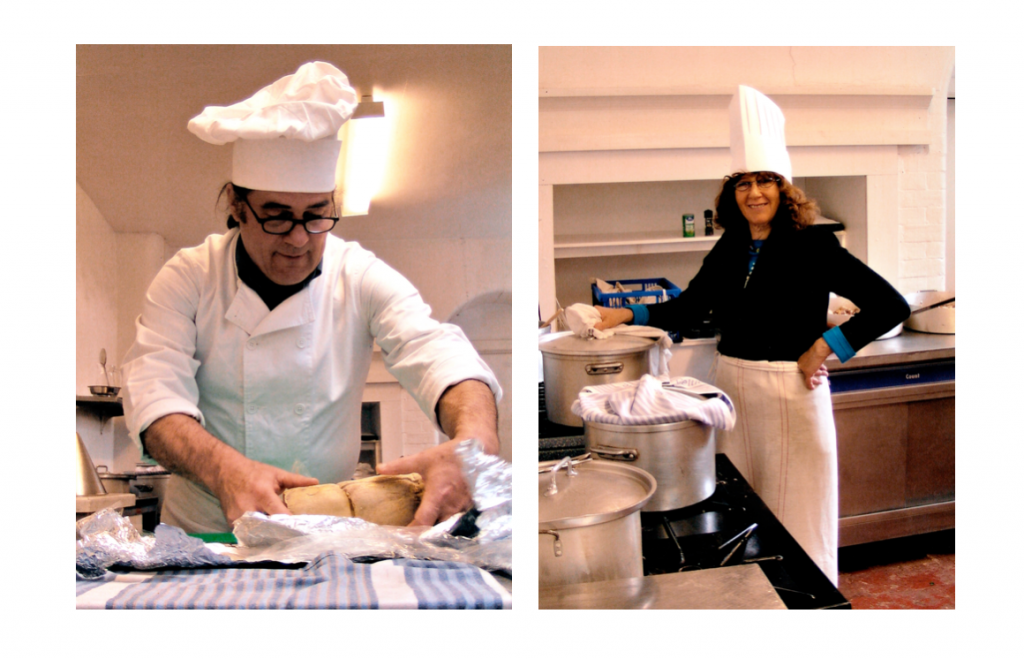 Our main course was a speciality from the Touraine. The main ingredients were sweetbreads: in truth these were the thymus gland of the adolescent calf. A biological note, of interest to Frank Buckland if no one else, is that this gland disappears as the calf grows up. Members need to know these things. This Beuchelle Tourangelle has become a classic of the Touraine since the recipe was ﬁrst recorded as cooked by Eduard Nignon for the table of the Austrian Emperor Franz Josef around 1800. It can be made with coxcombs which might have been difﬁcult to obtain, but we were well contented with the cognac morelle mushrooms and cream sauce. We were reminded that Rabelais himself came from Touraine, he regarded the area as his nursemaid and he would have been proud of Monsieur Luff this night. We enjoyed Chateau de Villeneuve 2003 a Chenin blanc from the chalk cliffs above the South bank of the Loire to the East of Saumur. 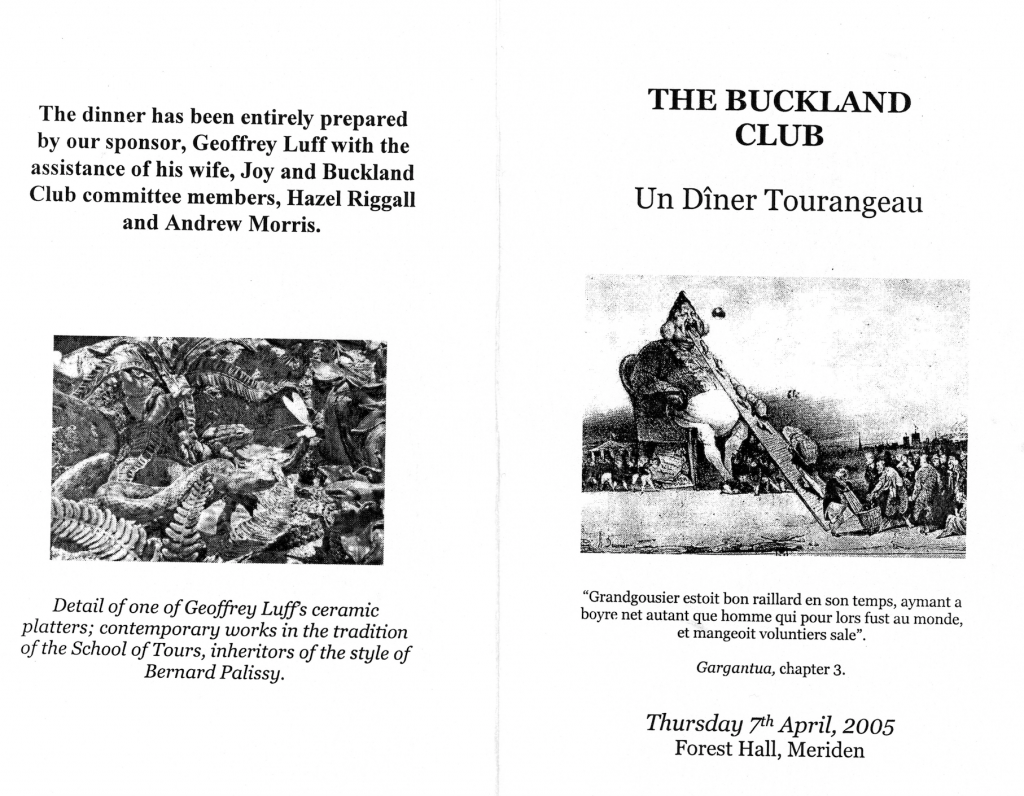 The cheese course was a study in goats’ cheeses offered at different stages of ageing. There was a Puligny St Pierre, in the form of a pyramid, a St Maure which was the oldest in the form of a log while the youngest was Selles sur Cher. This last was rolled in wood ash for additional ﬂavour. The Saracen invaders who traveled with their ﬂocks of sheep brought the art of making these cheeses to the Touraine. The goats and the cheese-making have lasted longer than the Saracens. With the cheese we drank a 1989 vintage wine from theﬁnest red wine producer in the Loire, Pierre-Jacques Druet, a Grand Mont, the grapes from the Southerly aspect of the hill behind Bourgeuil.

The ﬁnal phase of this excellent dinner comprised La poire tapee au feu de bois. Pearsdried over a wood oven, an ancient method of conserving the fruit. They are still authentically produced at Quincay between the chateaux of Usse and Azay le Rideau. They were rendered all the better for the remarkable eau de vie de poires which accompanied them. This powerful spirit is not available to the public, and the cognoscentiacquire it at great expense “au derriere de camion”, which may be translated as “off the back of a lorry.”

The evening was a triumph for Touraine, and enjoyed by members and guests.