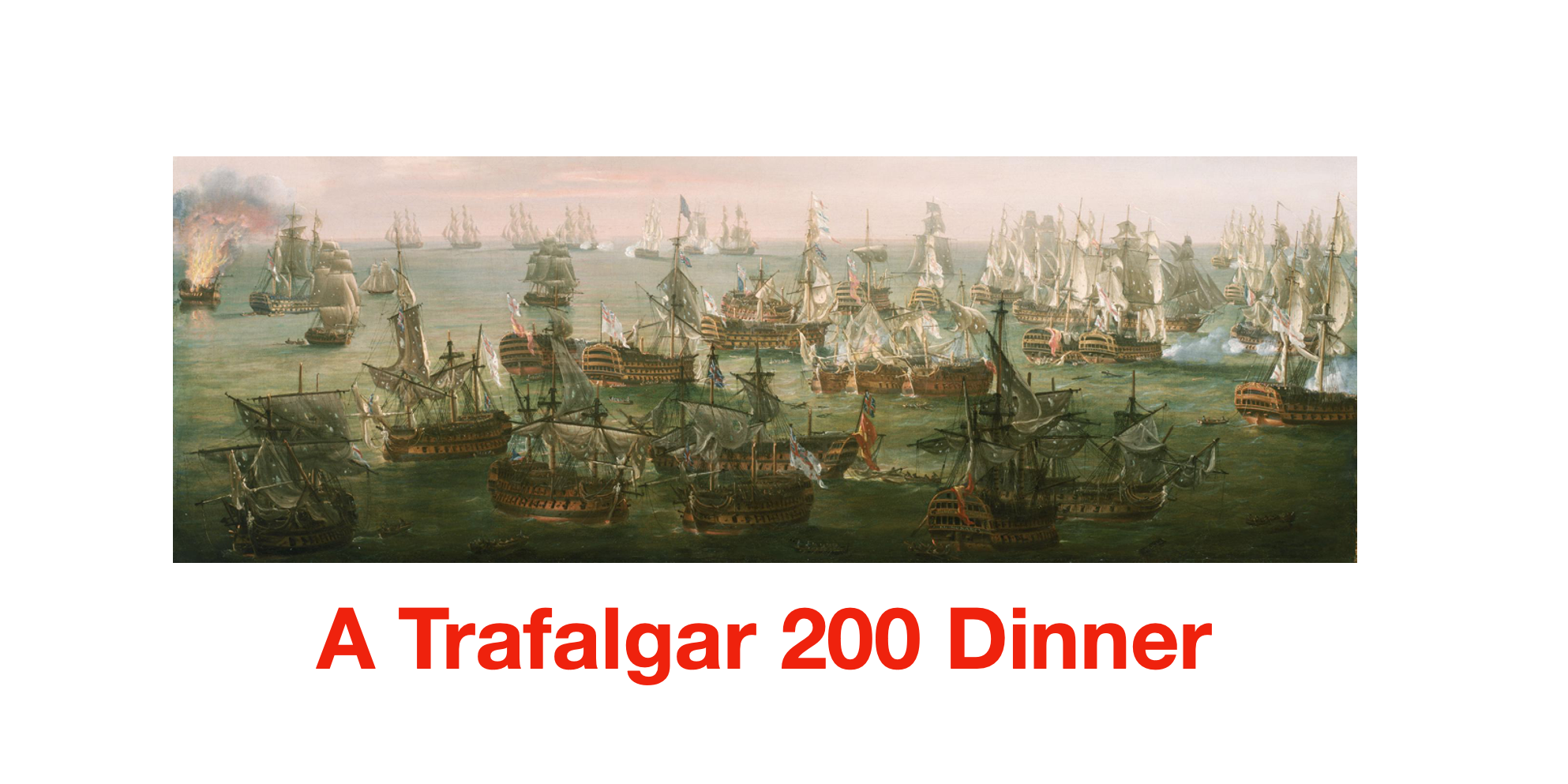 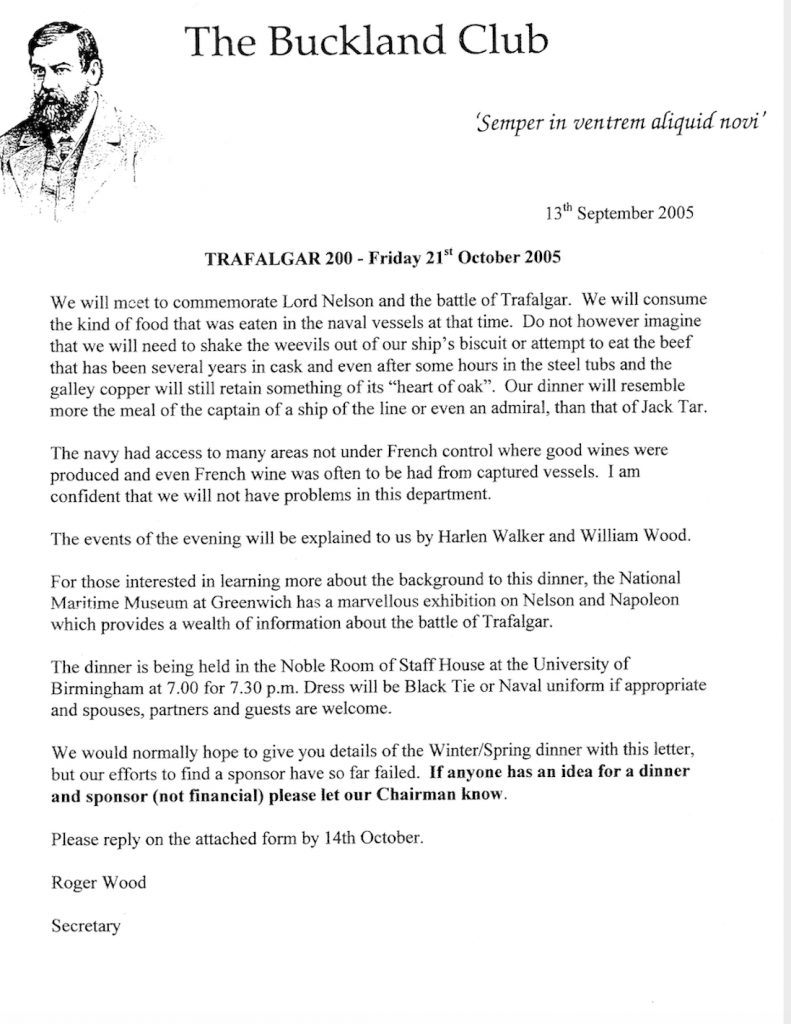 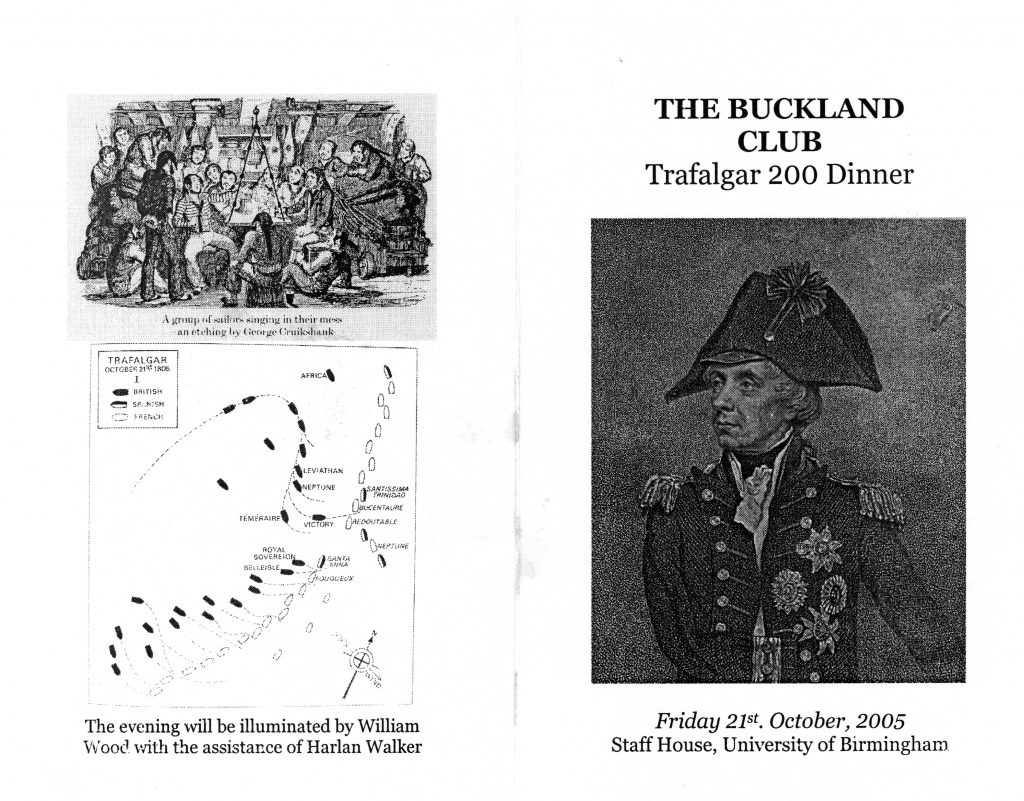 This dinner marked the two-hundredth anniversary of the Battle of Trafalgar, a deﬁning moment in the post-revolutionary skirmishes between this country and France, which pitted against each other two of the most daring military leaders of all history, Horatio Nelson and Napoleon Bonaparte.

Members may have initially had some qualms about attending a dinner based around the naval rations of the early nineteenth century. Admittedly, we know that Nelson was keen on ensuring the good health and morale of his seamen, and food and drink played a crucial role in this. Among his letters to the Commissioners for Victualling His Majesty’s Navy are complaints about being sent rice instead of cheese, requests for cocoa as a breakfast drink – normally burnt breadcrumbs boiled in water and called ‘coffee’ – and proposals for more quality wine and less strong spirits. It was known that limes prevented scurvy, and the juice might be mixed with rum and water – the ‘grog’ that would have been an essential preliminary to the Battle of Trafalgar. True, dietary disease in the British Navy had largely been eliminated by 1805, but this was hardly haute cuisine. Some members approached the evening with trepidation…

Oh we of little faith! We should have realised that the Buckland tradition would ﬁnd ingenious solutions to this culinary void.

We arrived to ﬁnd awaiting us appetising glasses of Negus – a concoction of sherry, lime, sugar and nutmeg. An 1862 manual on How to Mix Drinks describes this as ‘a most refreshing and elegant beverage, particularly for those who do not take punch or grog after supper,’ which probably applies to most of our members. We are grateful to the eponymous Colonel Negus for this appetiser from the West Indies (where Nelson and Collingwood sailed in pursuit of the French). 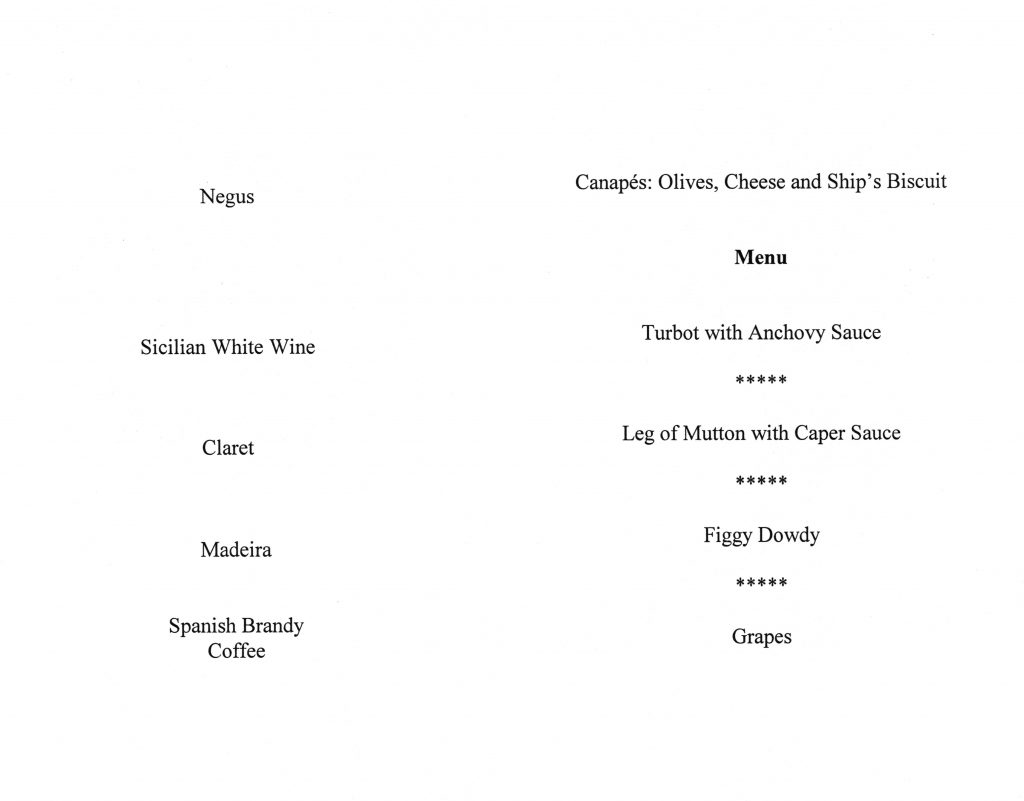 To accompany this we were offered canapés and a delicious olive and onion amuse-bouche, to remind us of Nelson’s association with the Bronte Estate in Sicily, granted to him by the King of Naples. These were accompanied by ship’s biscuits. Now I must admit I had secretly hoped that our Committee might have added a note of historical realism to the proceedings by introducing the odd weevil to the biscuit barrel, but no, this was to be an evening of “see no weevil, hear no weevil’.

Before taking our places at the table, we were given an informative introduction to the events of 1805 by William Wood – one of three tour guides for the evening. William explained that Trafalgar was the culmination of a cat and mouse game played out by Nelson and Napoleon’s naval commander Villeneuve. Villeneuve’s attempts to draw Nelson’s armada away from the Channel by feigning a voyage to the West Indies, so allowing Napoleon to invade our country, were a failure. Nelson realised the stratagem, sent a fast brig ahead of him to warn those left to guard the Channel and raced back from the West Indies to join them. Villeneuve was forced to take refuge in Cadiz, which set the scene for the Battle of Trafalgar. 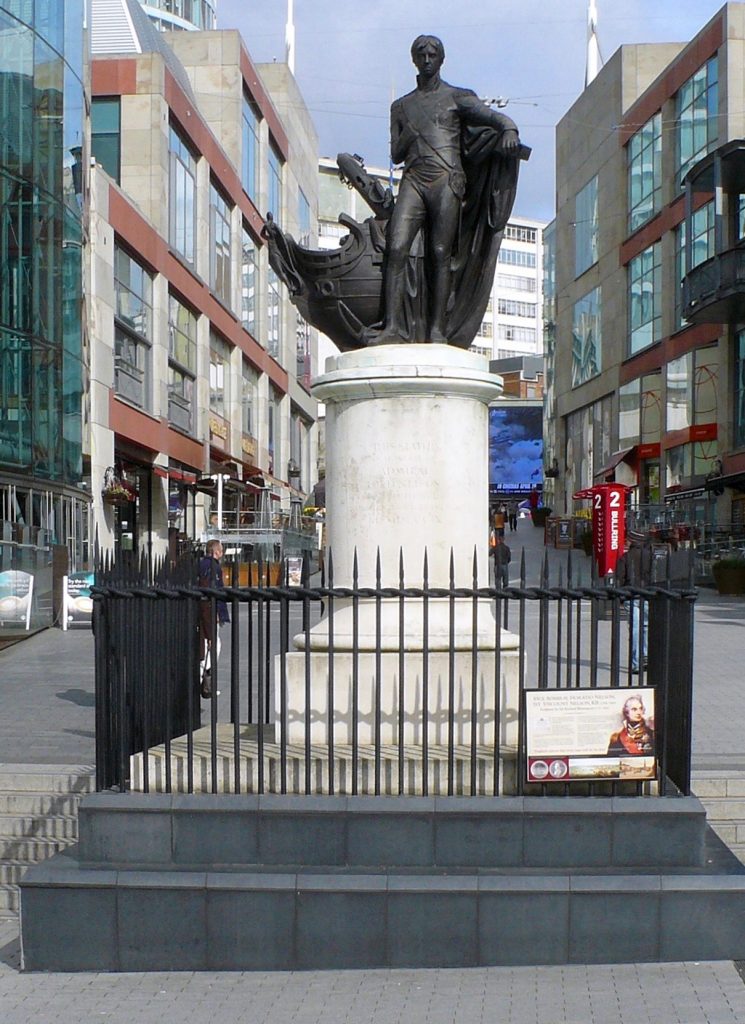 William asked at this point, ‘Would Nelson have joined the Buckland?’ He is known to have visited Birmingham in 1802 to public acclaim, and lodged at the Styles Hotel. He would not, however, have qualiﬁed as an enthusiastic gourmet: he ate sparingly. But he delighted in company, whether with fellow ofﬁcers or junior ranks. To his credit, he would have provided plenty of claret, which we too were to take later with our mutton.

But ﬁrst, the turbot with anchovy sauce. Harlan Walker, our second tour guide, explained the signiﬁcance of this dish. The expression “the Nelson touch’ is now applied to almost anything, but originally it referred to that sailor’s inspired leadership skills. Nelson had an instinctive feel for what would give a particular person conﬁdence in him. When Sir Hyde Parker was behaving badly to him, Nelson instructed one of his men during a sea crossing ‘on the Dogger Bank to ﬁsh for a turbot, which he knew Sir Hyde had a particular fondness for. He then had the turbot sent across the ﬂeet, despite rough weather, to Sir Hyde’s ship. This peace offering melted the ice between them and was instrumental in Nelson being given command of the squadron that fought and won the Battle of Copenhagen.

On our menu, poached turbot – whether from the Dogger Bank we were not told – was served with an anchovy sauce, suitably enhanced with chopped shallots and seasoned with mustard, cloves, nutmeg and mace. It was accompanied by a refreshing wine from Sicily.

In presenting the main course – leg of mutton with caper sauce – William reminded us that sailors needed to go into battle ﬁred up and with a full stomach. Nelson had sent six ships to Gibraltar to collect provisions: given the importance of mutton in the diet of the Iberian Peninsula it would not be surprising if the ships eventually returned with the ingredients for this succulent dish. We were asked to imagine eating our main course as the ship’s bands played on deck above us, and as we drifted tantalisingly at only a few knots towards the combined ﬂeets of the French and Spanish. The mutton was washed down in our case by an elegant claret. Buckland members are aware that what helps claret to keep for so long is tannin. What fewer of us may have realised was that the tannin in oak timbers had the same effect, which is why we lost our forests to the naval shipyards: a 74 gun ship in Nelson’s ﬂeet would have required three thousand mature oaks.

I shall spare you the details of the battle of Trafalgar, “except to point out that this is one of few battles of which one can say that the commander won it single-handedly. One might also suggest that in sending out his famous signal (“England expects’…), he had an eye on his place in history. He was felled by a musket ball ﬁred by a sniper high in the mizzen top of a French ship, and died soon afterwards.

In anticipation of the dessert course, our third tour guide, Roger Hale, produced a three-pronged knife that closely resembled the one Nelson had had made. We were enjoined to eat our dessert with left hand only, with the single conventional fork provided. Those of us with small grandchildren had no difﬁculty in doing so.

Figgy Dowdy is a West Country variation of Spotted Dick, the basis of which is ship’s biscuit — normally pounded with a marlin-spike for a good half-hour – and mixed with dry Mediterranean fruits. It went especially well with the Madeira that accompanied it. Spanish brandy, grapes and coffee (free of burnt breadcrumbs on this occasion) concluded this excellent naval meal. David Hardy offered as a suitable toast, ‘A willing foe and sea room,’ though it is to be hoped that members driving home afterwards did not take this too literally.

Thanks were given to David Temperley for providing realia relating to our theme, and to Tim Clark for displaying a section model of the Victory.