Minutes of an Agatha Christie Dinner by Roger Hale

The dinner was sponsored by Doctor Guy Houghton. Those of us with memories steeped in the history of the Club recalled that the Houghton family are well known as serial poisoners of the Buckland Club. There had been an earlier attempt at mass murder of Buckland members when a Houghton of the preceding generation sponsored an infamous Fungus Dinner. Although intended to decimate the membership, the Buckland survived. 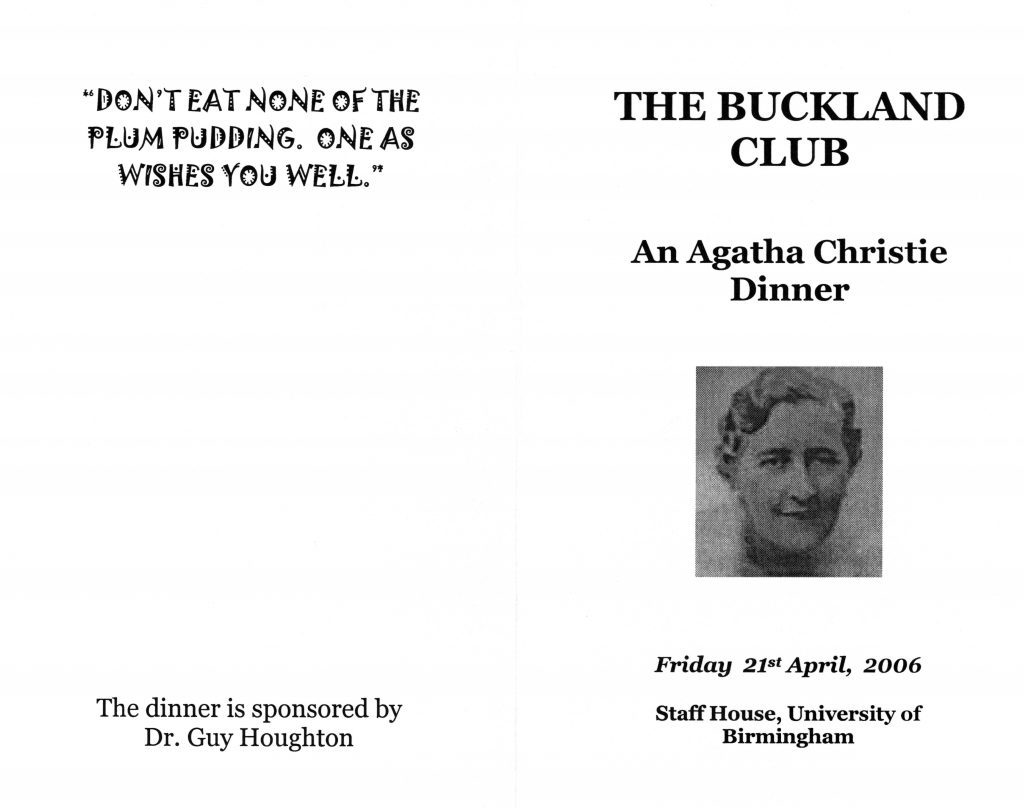 Our proceedings began as they should with Sparkling Cyanide. In the story, six people sit down for dinner at a table laid for seven. There is a sprig of rosemary at the seventh setting, for the remembrance of Rosemary Barton who had been poisoned at this table one year ago and by one of the six guests!

Thus is the scene is set for a murder mystery with a limited number of suspects and the least likely one of them is eventually found to be the cyanide poisoner.

The Buckland Club was unaware of its danger, and we drank cheerfully and mopped up the cyanide with canapés of potted meat and potted crab. These canapés were ﬁne as vehicles for yet more poison.

They were typical of the period but they were not very inspiring to the taste. The Buckland has had numerous literary dinners and at least one musical one. Great writers may well be great gourmets, or at least fill their pages with magniﬁcent meals. But Agatha Christie, who has sometimes been accused of devising only cardboard characters, might equally be charged with offering a cardboard cuisine.

When Poirot retired, Agatha thought that his interest was in growing vegetable marrows. Speaking as a man who ﬁnds the marrow the dullest form of vegetable life, your minutes secretary prefers to believe that Hercule Poirot must have been growing asparagus. My little grey cells tell me that Agatha can’t tell the difference.

Like Sherlock Holmes who returned so famously, Poirot had to come back from his gardening to resolve the murder of Roger Ackroyd. This was the book of which the unusual choice of murderer had been suggested to Agatha Christie by Louis Mountbatten.

Agatha Christie was born in 1890, and ﬁrst married to a military man who took her to Cairo. Several stories are set in Egypt. But at this stage, Agatha was taken up with the social whirl of dances, races and polo games. One doubts that such pursuits gave her a chance to try the intricacies of the cuisine of Cairo.

Later she was much more successfully married to an archaeologist, Max Mallowan. She said that an archaeologist was a good choice of husband because as the wife grew older and older the husband took ever increasing interest in her! She in turn became interested in his work, accompanied him on digs and revelled simple desert life. Again, I fear not much opportunity for extravagant dining.

Back to our dinner. As a poison, Strychnine is highly effective, but its taste and smell are such that no one would take even a sip. Fortunately for our dinner, Agatha Christie’s inventive mind recognized that the oyster is rapidly consumed, and the juice gulped down the throat in an instant so that Strychnine would not be detected until it was too late! Buckland members, lured into a state of security by Dr Houghton’s bedside manner gulped enthusiastically. The oysters paddled down our throats and did us little harm. They were enjoyed with a dry Vouvray from Daniel Jarry. 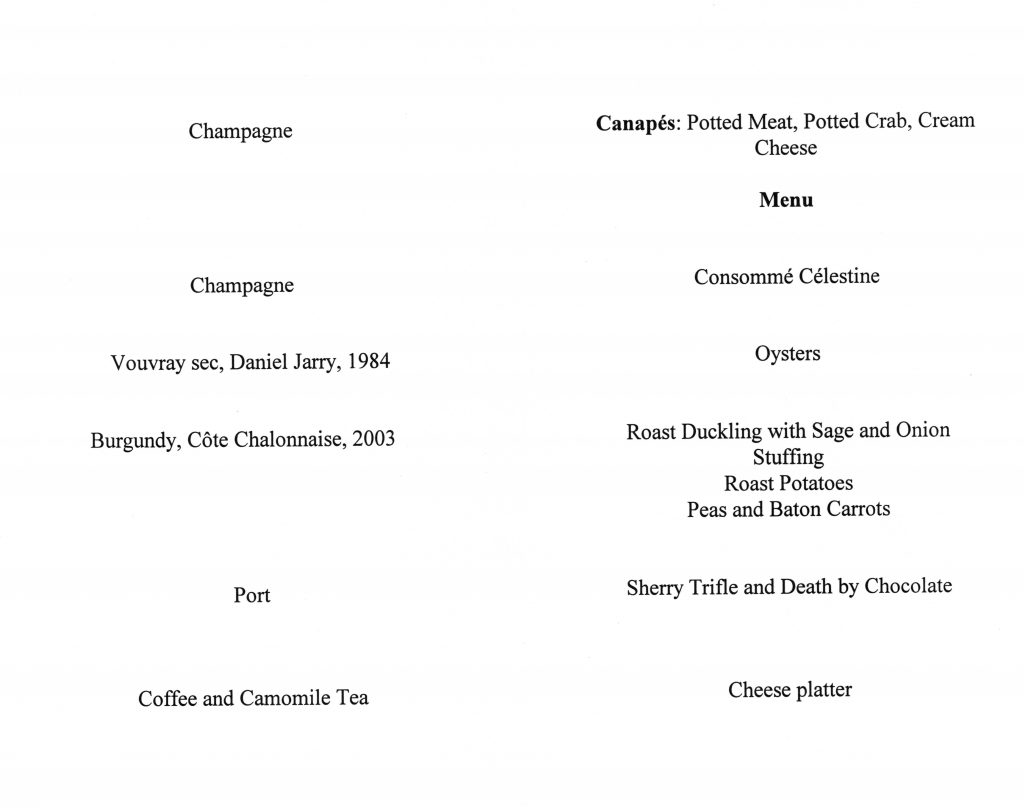 Our next poison was Digitalis, taken with the stufﬁng of a duckling. Because William Withering [who resided in the house which is now Edgbaston Golf Club], discovered the medical qualities of the foxglove, digitalis is well known in Birmingham circles. In the wrong quantity digitalis will kill the man with the weak heart as it did in The Herb of Death.

Leaving aside the poison, the duckling was delicious served with innocuous vegetables and much enjoyed with a 2003 burgundy. Cuvee Le Levraut. This is made from a combination of grapes 75% of which are matured in oak and 25% tank aged. The result was a fresh and bright blackberry ﬂavour.

There followed sherry triﬂe and death by chocolate. One of these puddings was intended by Agatha Christie to induce a headache in the victim who then takes an aspirin. It is the aspirin which has been poisoned! Buckland members were unlikely to suffer any headache from these pleasant puddings, and more likely to be so affected by excessive consumption of that excellent burgundy and then the port.

The port was there to remind us of the many libraries in which gentleman took their evening glass only to leave their own or sometimes to ﬁnd other people’s bodies there. Port was also enjoyed by Captain Hastings. He was the foil to Poirot, playing Dr Watson to Sherlock Holmes and establishing the important role of the sensible but straightforward side-kick to the brilliant sleuth. Crime writers have used this character ever since.

The burgundy and port were still with us as we moved to the ﬁnal course. When Dr Houghton explained that this was inevitable there was a groan from the membership as they realized it must be Mousetrap. For Agatha Christie and her heirs this has been the most successful money spinner of all. For us, we appreciated that a good cheddar cheese can be an excellent conclusion to a ﬁne dinner.

Agatha Christie’ s works have sold in greater numbers than any literature with the exception of The Bible. Although the ﬁeld is immense, it is a challenge to choose a good dinner from her writings. Dr Houghton succeeded and we are most grateful to him and to the Staff House. This gives rise to the distant prospect of The Bible Dinner which should be taken up by the next Houghton in the Club. We would start with apples from the garden. Then there would be manna and quail from the desert. Locusts and wild honey would appear. Ingredients would include ﬁve loaves and two small ﬁsh washed down with some watery wine. I will not be taking the Minutes but hope to join you there.