The Background to the Dinner by Andrew Morris

As a parent and teacher of primary school aged children I was fully aware of Roald Dahl’s connection with food. Not only was there the book, Revolting Recipes, but a host of other references for children; giant peaches and chocolate factories were two that immediately sprang to mind. However it was a short story for adults, Lamb to the Slaughter (which is one of his Tales of the Unexpected), that was to provide the real inspiration for the resulting evening.

As soon as I began to research the practicalities of a dinner I was delighted to discover that Roald Dahl and his wife, Felicity (Liccy) had published a cookbook in 1991. It was written during the final twelve months of his life, and contains a wealth of recipes created at Gipsy House where the family lived. It comes highly recommended, plus all royalties from Roald Dahl’s Cookbook go the Road Dahl Foundation – now known as Roald Dahl’s Marvellous Children’s Charity.

When catering for the Buckland Club there are usually some unique considerations surrounding the planning of any meal. On this occasion certain factors were very much in our favour. We possessed a mass of potential dishes and recipes, none of which presented any huge degree of difficulty for a competent chef. Equally important was the fact that we did not require any specialist wine or other drinks. Supplying our own wine would usually result in a hefty, although not unreasonable, corkage charge. At the time of the dinner, corkage would have been between £4-6 per bottle for wine. Because of Dahl’s splendid tale about pretentious wine expert, Richard Pratt, in Taste we would require fine wine. But not necessarily anything that required exorbitant expense. The Club had, and has, many aficionados of the grape although fortunately there are no Pratts.

One of the many hurdles to be overcome before a dinner falls into place is, perhaps not surprisingly, the venue. The committee had been enthusiastic to test the skills of students at the College of Food, and this theme was ideally suited to both parties. Given a specific brief the budding caterers were set the task of designing and serving an appropriate menu. They coped magnificently, and the dinner was extremely well received. The guest speaker, Margaret Walker, was paramount to the success of the evening. She was a friend of one of the members and was a close personal friend of Roald Dahl’s secretary. She provided a tremendous insight into the life of one of the world’s most loved authors of all time.

Shortly after the dinner I was amazed to receive a letter from Liccy Dahl. She had heard about the evening from Margaret. 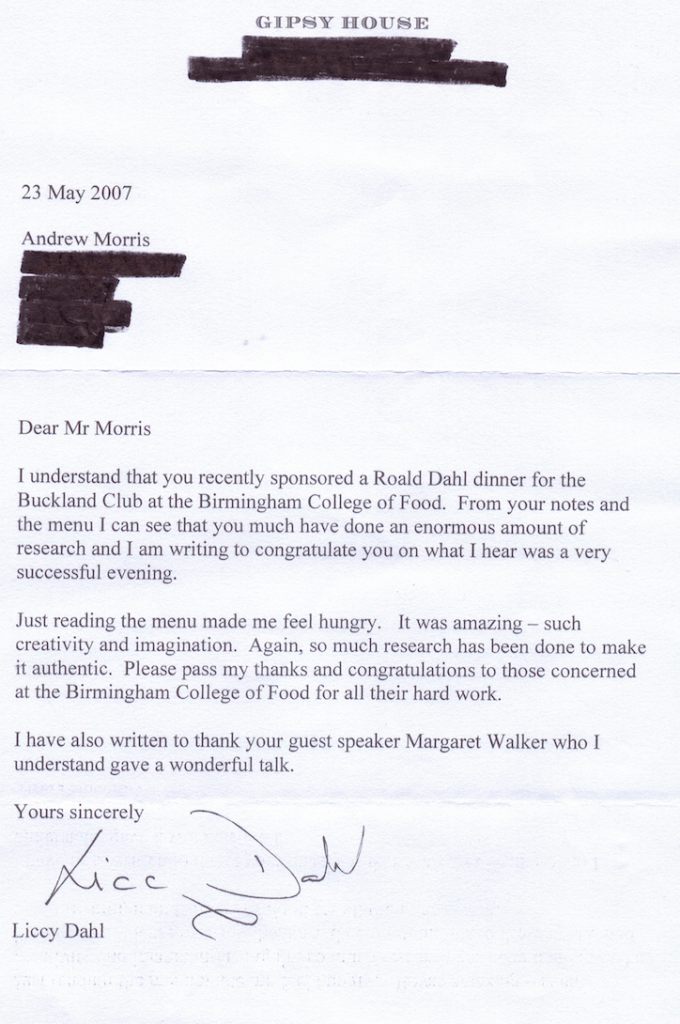 Below is the menu created by the students 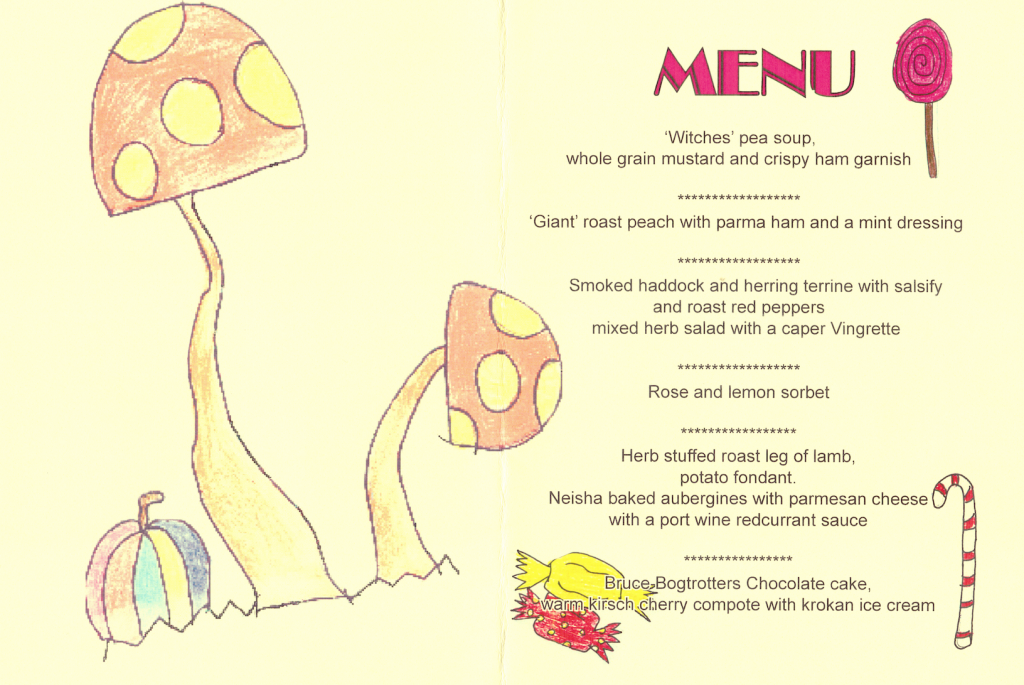 Roald Dahl died on 23rd November 1990, but throughout his life he had boundless enthusiasm for good food, drink and conversation. It was entirely ﬁtting, therefore, that his life and work should be chosen as the theme for a Buckland dinner.

We were indebted to the inspiration, knowledge and obvious enthusiasm of our Sponsor, Andrew Morris, for the choice of theme and organisation of the dinner, and for the quality of the cuisine to a creative team of aspirant Nigella Lawsons and Gordon Ramsays at the Birmingham College of Food.

Those of our members already acquainted with Roald Dahl’s life and work came to the dinner, I am sure, with some apprehension. Would Andrew have got his team to work on Snozzcumbers and Fresh Mudburgers, Stink Bugs Eggs and Crispy Wasp Stings, or perhaps Boiled Stabbages and Grobswitchy Cake, washed down with Frobscottle? Would we be invited on entering the dining room perhaps to try out the Lickable Wallpaper? We would soon enough ﬁnd out.

On arriving at our venue for the evening, we were offered wine gums. This was, Andrew later explained, because treats were an essential part of Roald Dahl’s life. And a treat could be a wine gum lifted silently in the middle of the night out of a large jar he kept permanently by his bedside.

Having raided the wine gum jar, we moved on to cocktails. I ﬁrst tried the Vodka Martini that was James Bond’s favourite tipple in You Only Live Twice, for which Dahl had written the screenplay. Like 007, it packed a powerﬁrl punch: it left me both shaken and stirred.

Looking for something gentler, I tried a second cocktail, George’s Marvellous Medicine. It proved an equally lethal concoction of vodka and blue-curacao and brought back my own rugby memories of slowly regaining consciousness with the aid of smelling salts.

And then, yes, Frobscottle! It contained midori, grapefruit juice and soda; but despite the team’s best endeavours they had not authentically got the bubbles to go down rather than up, as in The BFG.

Moving into the dining room, we found tables exquisitely set out, each based on a theme from one or other of Roald Dahl’s stories. It was at this point that we became aware of how much creativity the students had themselves contributed to the evening.

Our ﬁrst course was ‘Witches’ Pea Soup, accompanied by whole grain mustard and ham garnish. The literary reference was of course to The Witches, published in 1983. Those of us expecting James’ giant peach to appear later as the pudding course were agreeably surprised to meet it at this stage, with a parma ham and mint dressing.

The remaining courses owed more to the author’s genuine interest in good food than to his children’s stories, and were all drawn from The Roald Dahl Cookbook, on which he had worked with his wife in the twilight of his life.

A Smoked Haddock and Herring Terrine with salsify was delicately accompanied by a Siegel Mosel Riesling. A Rose and Lemon Sorbet then led to the main course, Herb-Stuffed Leg of Lamb with aubergines and potatoes, in a port wine redcurrant sauce. In Dahl’s Lamb to the Slaughter, a woman kills her husband with a frozen leg of lamb, and then ingeniously destroys the evidence by roasting it and inviting the local police to dinner. On my table, despite its dubious forensic history, this dish met with universal approval.

In keeping with the playful atmosphere of the evening, at this point Andrew offered two red wines of markedly different price, and asked members to guess which they preferred with their meat course. Again the literary reference was to two short stories: Butler, in which a butler substitutes his millionaire master’s claret with ‘a cheap and rather odious Spanish red, and Taste, in which a guest playing our wine-guessing game cheats by looking at the label before dinner. It is not clear how many Buckland members supplemented the students’ income that evening with a small bribe, but they all appeared to ﬁnd it remarkably easy to identify the more expensive of the two.

The wines turned out to be a very drinkable claret, Chateau La Tour St Bonnet Cru Bourgeois and what Andrew described as a ‘far from odious’ Spanish red, Candidato Plata Rioja. Incidentally, this conﬁrmed my own experience, namely that the more convoluted the description on the label, the higher the price tag…

Until this point, our guest speaker for the evening had not intervened, but her moment had now come. Margaret Walker’s connection with the Dahl family was through her close friend Wendy Kress, Dahl’s ‘scrumdiddlyumptious’ secretary.

Margaret provided an interesting insight into Dahl’s life, from his Norwegian family roots and his early upbringing in Llandaff, to his school experiences in Repton, and later to his life in Gypsy House in Missenden, where he, his wife Felicity and a team of young cooks experimented with recipes for The Roald Dahl Cookbook. The residents of Llandaff would be miffed to read Dahl’s dismissive account of his early years there: ‘The sweetshop in Llandaff in 1923 was the very centre of our lives. To us, it was what a bar is to a drunk. Without it, there would have been little to live for.’ We learned that later, at Repton, Dahl could indulge his obsession with chocolate, because pupils at the school were used as tasters for the nearby Cadbury’s factory.

We had now come to the ﬁnal course, at least of the formal part of the meal: Bruce Bogtrotter’s Chocolate Cake, from Dahl’s classic story, Matilda. A Norwegian ice cream, ‘Krokan’, and Brown Brothers Late Harvested Muscat proved perfect companions to the cake. But for chocolate addicts, there was a last surprise waiting outside the dining area: an irresistible chocolate fountain, surrounded by strawberries and marsh mallows.

For my part, this was one of the most memorable of recent Buckland dinners. We were all aware that this was the culmination of months of hard-work by Andrew Morris and his band of College helpers, and that this was also to be an integral part of the students’ ﬁnal assessment. In the event, they acquitted themselves superbly and the generous plaudits they received from Buckland Club members were amply deserved. We should all sincerely hope that this was reﬂected in their assessments. 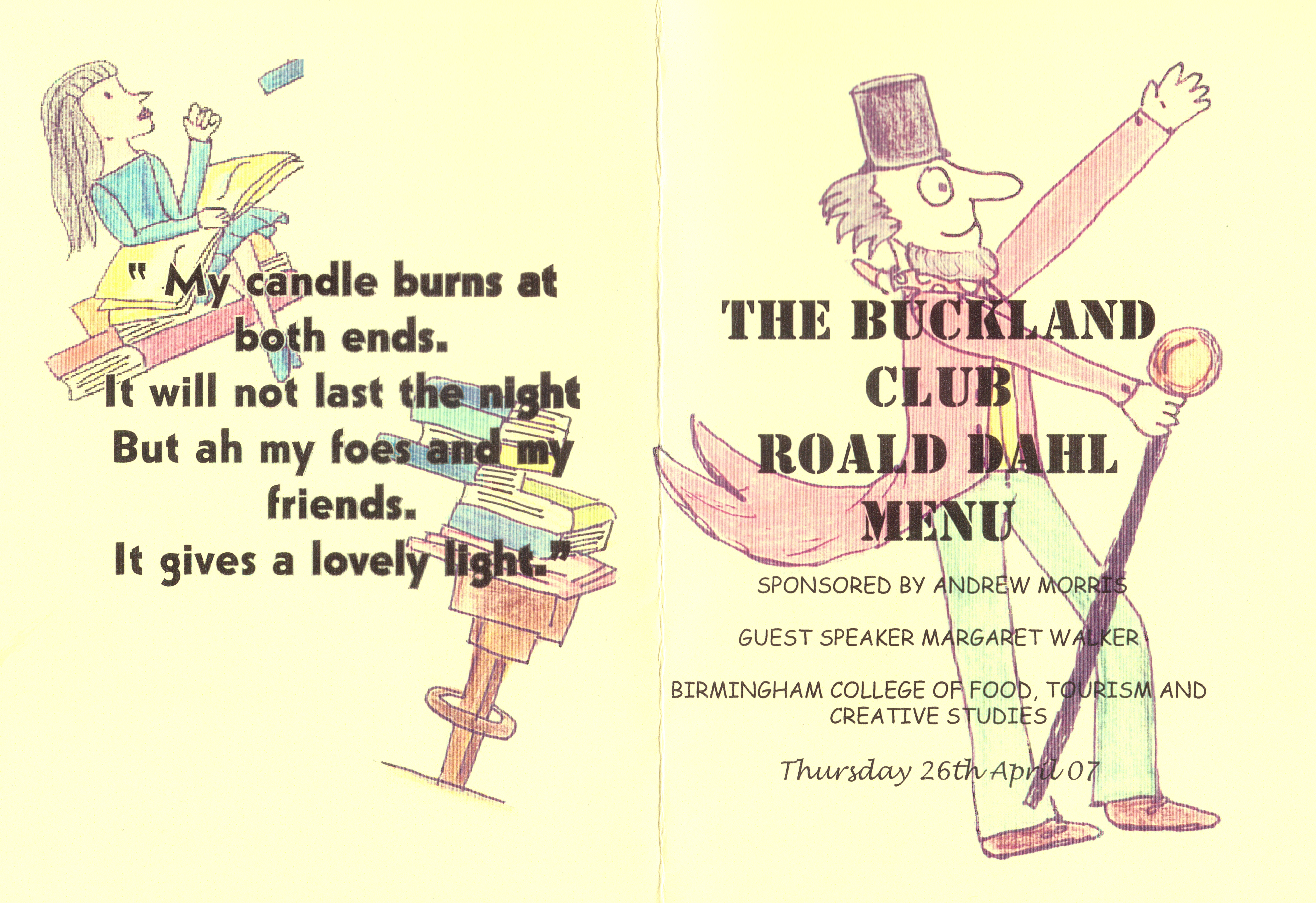