Introduction to the evening.

This has been an opportunity to bring to fruition a dinner to celebrate his life which started as a serious plan after meeting Ruth at The Lichfield Book festival in 2007. There has been a growing interest this year in Soyer, this being the bicentenary of his birth (October I809 – he died on 5th August 1858, aged 48yrs). Recently, there has been a small exhibition at the Reform Club which Ruth Cowen (our guest speaker) helped to research and you can now see the newly restored Soyer memorial in Kensal Green cemetery designed by him as a monument to his first wife Emma.

A recipe taken from “A Culinary Campaign” of 1857 which aimed to document hisexperiences in the Crimean war and continue the precedent he set, aiming to improve the diet of the army. The Crimean Cup is reported to be part of a menu for one of his so called ”London suppers” and the ingredients were perhaps present out in the Crimea where copious amounts of alcohol were documented as being consumed. It is composed chiefly of a mix of soda water with sugar, Maraschino, Orange Curacao to match with the orange zest, cognac and plenty of Vouvray standing in for champagne. We left out the Wenham lake ice which we failed to procure. Wenham lake ice from Massachusetts was first exported ice to UK in 1844 and was said to be a favourite of Queen Victoria. A more close at hand, modern form of frozen water from a local source has been substituted which I hope serves adequately.

By way of contrast and to give our teetotaI guests a suitable beverage, the homemade lemonade pays homage to the drink served in the Great Barrack Hospital, Scutari and subsequently in many of the UK hospitals for the sick, wounded or convalescing. Thereare several variations available – one including no lemons at all merely tartaric acid

After being seated for dinner

In the book ”Memoirs from Sayer” published In I859 by his two secretaries and confidants Volant and Warren, it is said Soyer noted ”Never let your guests sit down to table without acquainting them beforehand with the bill of fare, that is, if the dinner be a ceremonious one; because the great variety of dishes placed on the table is to give a choice to the different tastes of the company. We are not however sitting down to a grand banquet tonight of the scale of the one in honour of Ibrahim Pash (July 1846) with some 46 or so dishes, neither are we grabbing a meagre bowl of soup from a wooden bowl – with spoon attached by a chain in one of the soup kitchens during the Irish famine. I have tried to run the middle course with a modest choice of dishes sourced from his original recipes or receipts as they would have been called, with adequate Gallic alcoholic refreshments to accompany. 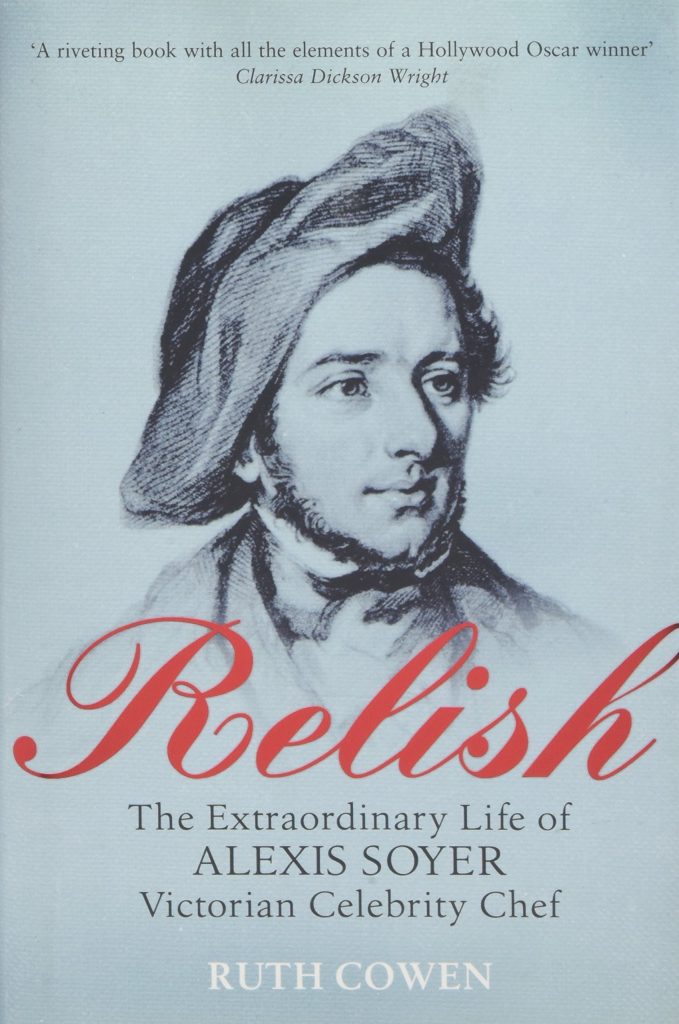 I am delighted to welcome Ruth here this evening to our very special dinner celebrating the life and work of Alexis Soyer. Ruth Cowen has been an editor, writer, researcher and iournalist for about 14years.Her articles have appeared in a wide range of newspapers including The DailyTelegraph, The Sunday Express, Daily Mail and The Independent. She has also written a number of award winning documentaries for Radio 4 and in 2007, Ruth was awarded a double accolade -The Guild of Food Writers Food Book of the Year and Best First Book awards for her fascinating book ”Relish: The Extraordinary Life of Alexis Sayer”. Just before Christmas l was lucky enough to catch the programme ”The Long View” on Radio 4 about Alexis Soyer (comparing him to Jamie Oliver) and which Ruth appeared on.

This is also taken from his book ”Sayer’s Culinary Campaign” On the title page, it states ”Being historical reminiscences of the late war (Crimea) with the plain art of cookery for Military, and Civil institutions, the Army, Navy, public etc etc”

The chapter named Army receipts describes the use of his newly designed field stove with the now famous drawing as shown on your menu this evening. 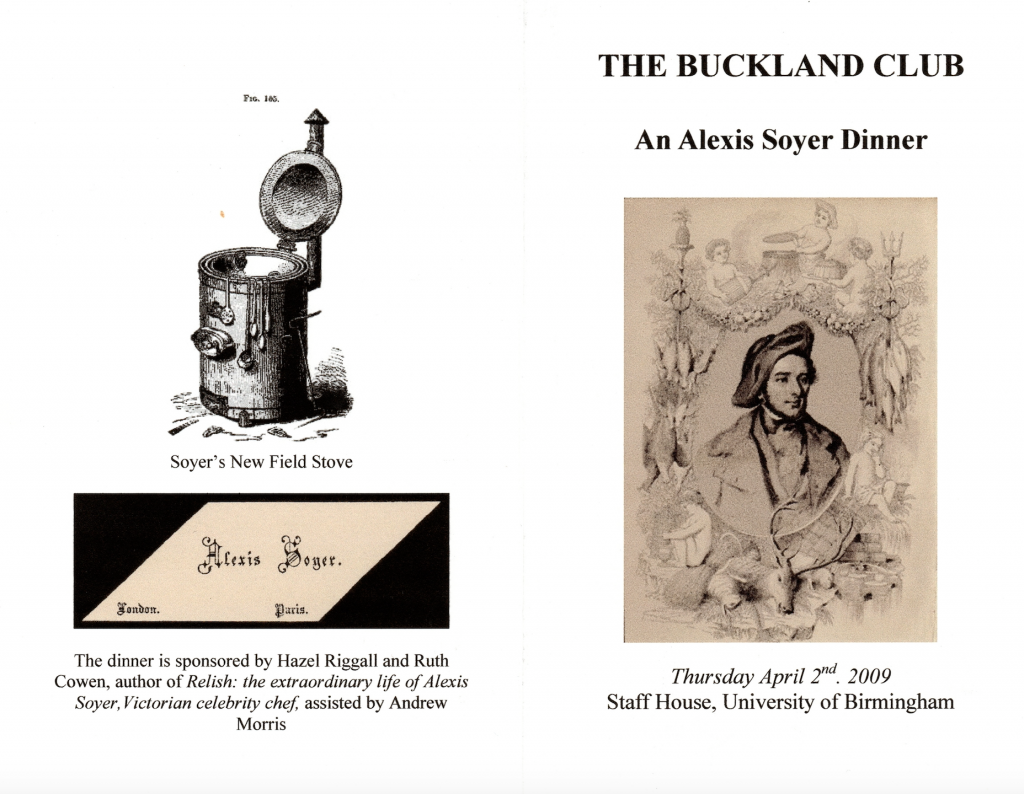 The simple soup recipe documented as being written on 12th May 1856 allows for 1Ib meat ration per man along with vegetable ration (fresh or preserved), rice if available and seasoning.

The choice of soup is an obvious one alluding to his philanthropic work in helping to set up soup kitchens in Ireland during the famine of 1847 and in several areas of London around the same time. It is also a nod to his business relationship with a certain Mssrs Crosse and Blackwell (more known as a brand name for canned soups today) although that was for his sauces and not soup – more of that later….

The recipe comes direct from the book ” The Modern Housewife or Menagere” published in 1850 for the expanding middle classes and addressing their need for culinary advice. He had already written ”The Gastronomic Regenerator” (one of his nicknames) for the wealthy in 1846.

This a simple casserole of rabbit with bacon, onions ,mushrooms and stock thickenedwith flour served with mash, savoy cabbage and French beans(hopefully not boiled half to death as Soyer seems to imply is required). Soyer was partial to rabbit and there is a lovely anecdote about him having three servings of curried rabbit at one dinner declaring it was the best he had ever tasted. He was reminded to much amusement that it was in fact one of his own recipes.

Being a dietitian, as many of you know, I just wish to add a note about Soyer and his understanding of basic nutrition. It has often been said by my colleagues that Florence Nightingale was the first dietitian, but having read about Soyer I would like to give him this title as he does show some understanding about nutritional balance. He wrote a pamphlet of instructions to military hospital cooks, on the preparation of diets for sick soldiers and lectured on military diets. I quote from a section on vegetable diets (vegetarianism) from Memoirs of Soyer:

”It is customary in dietaries to show the estimate of the comparative degrees of nutriment contained in each article of food, by showing how much of the elements of nutrition they separately contain; and a conclusion is arrived at by ascertaining the quantity of starch, albumen, fibrine (fibre?), etc., they may hold in their composition, or, still further by the oxygen, carbon, iron, and such other elementary substances of which they are composed. Such researches are vain; the amount of nutriment is not to be measured by such means. It is to the organisation of the food we are to look, rather than to its crude particles. He goes on to discuss how to produce good results from different foods and recipes for vegetarians.

This is essentially a good old fashioned steamed suet pudding using marmalade served with real custard. The dessert wine is one of my favourites Monbazillac. He is noted to have particularly enjoyed Spotted Dick but this is my preferred choice so apologies

This is again from ”A Culinary Campaign” and therefore conceived with field conditions in mind. The French version of a Welsh classic, it is essentially a fondue which can be poured on to toast and served immediately or is said to be improved if put in the oven. It nearly defeated our chef Mark due to difficult of supplying toast in large quantities but perseverance won. Soyer was said to have loved this dish .

Ruth – n.b Scutari teapot and anecdotes about use in hospitals, etc

Before tea we will all sing the Soyer version of ‘God Save the Queen’. 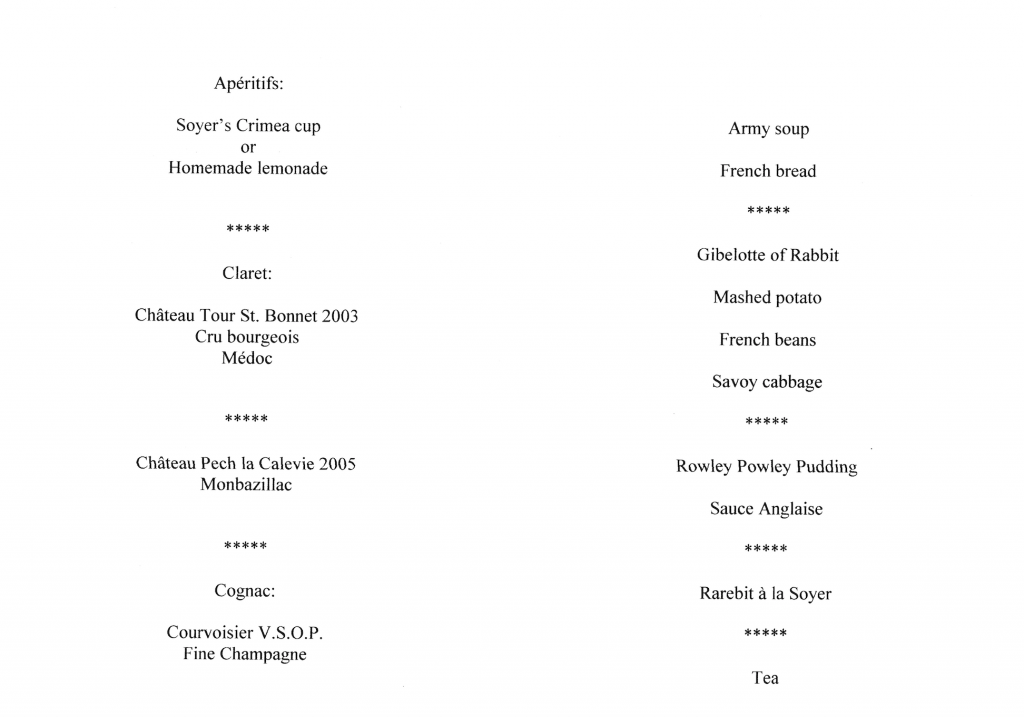 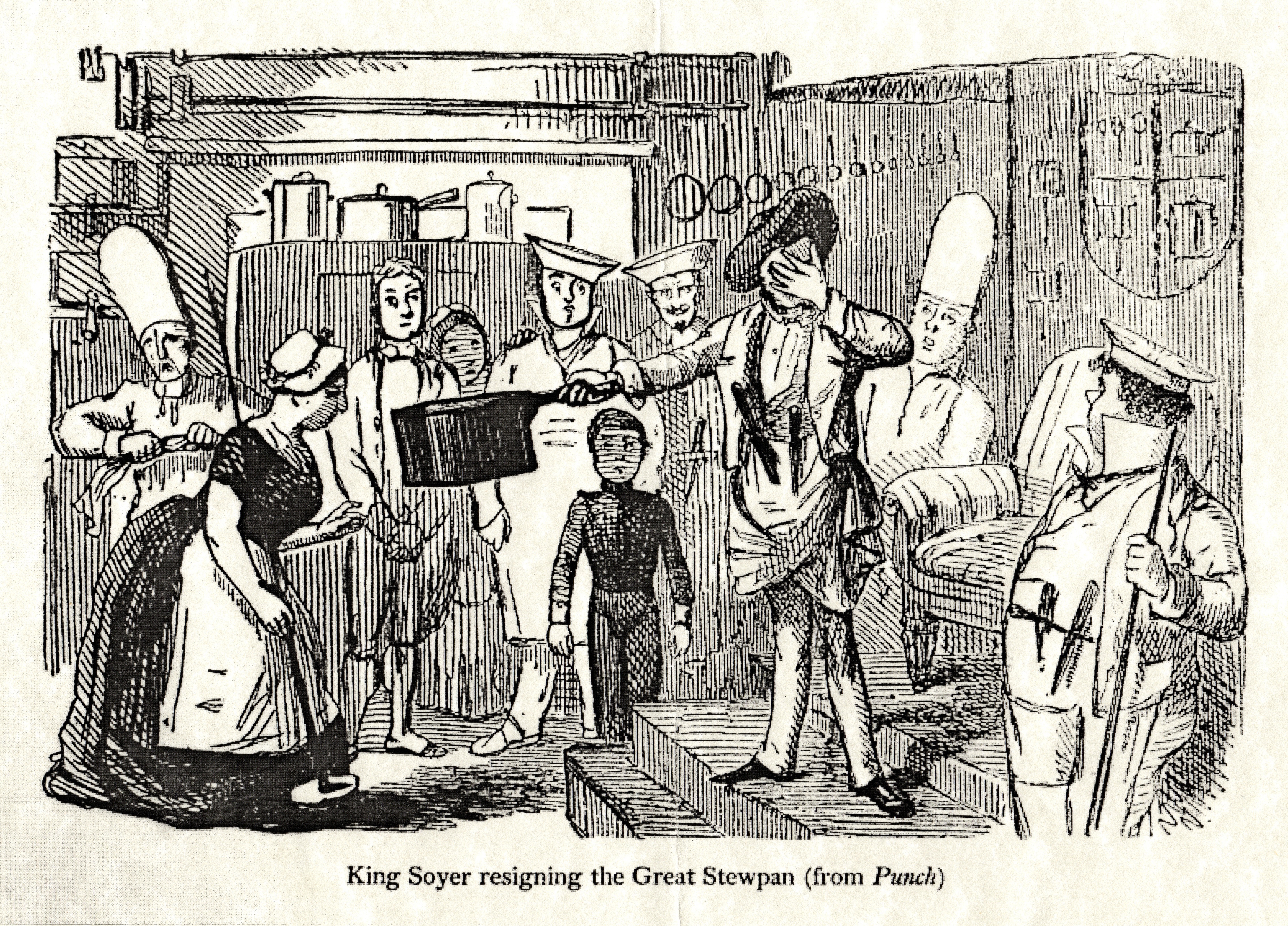 Place-mat for the evening 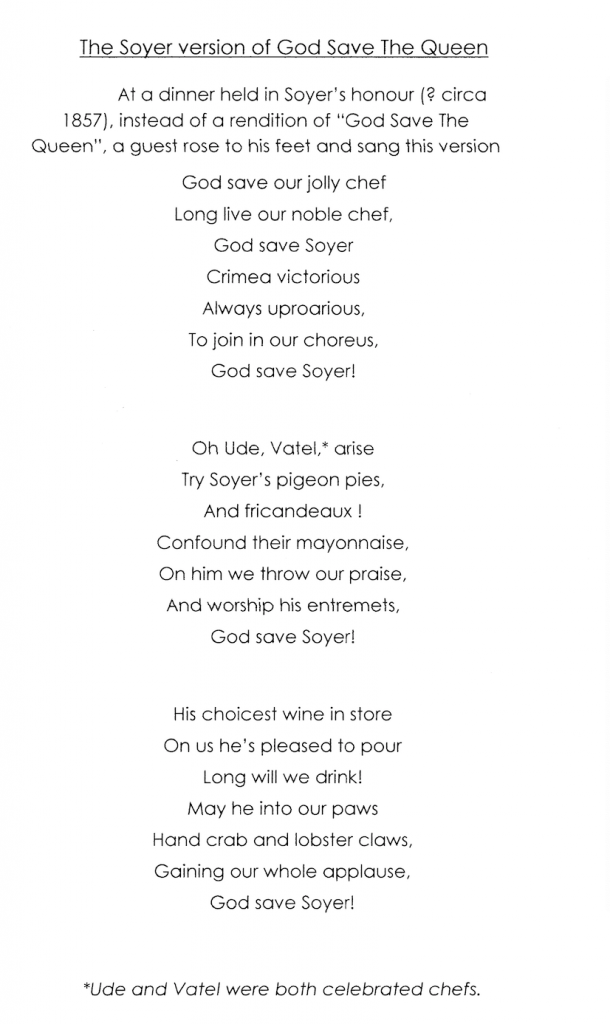 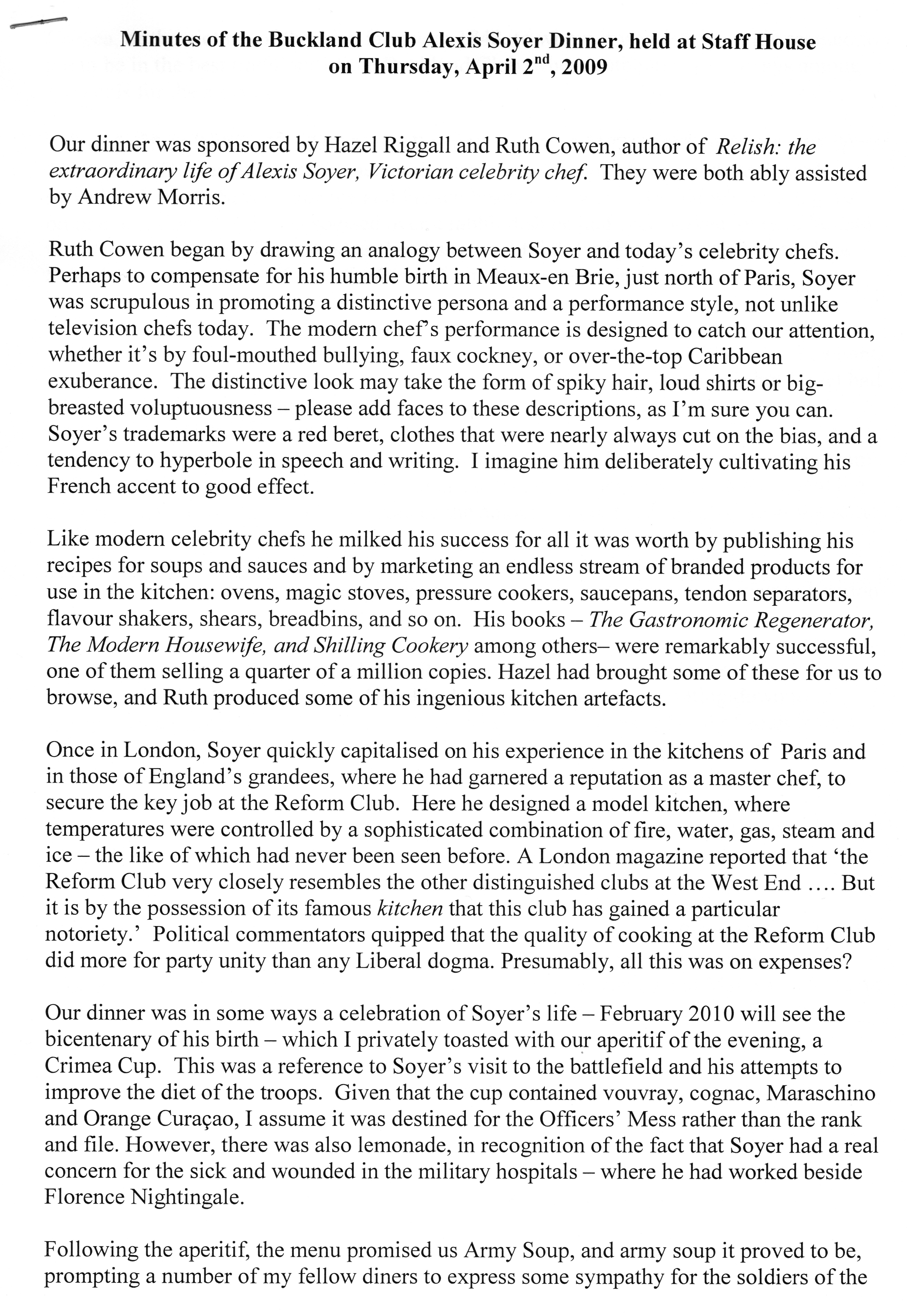 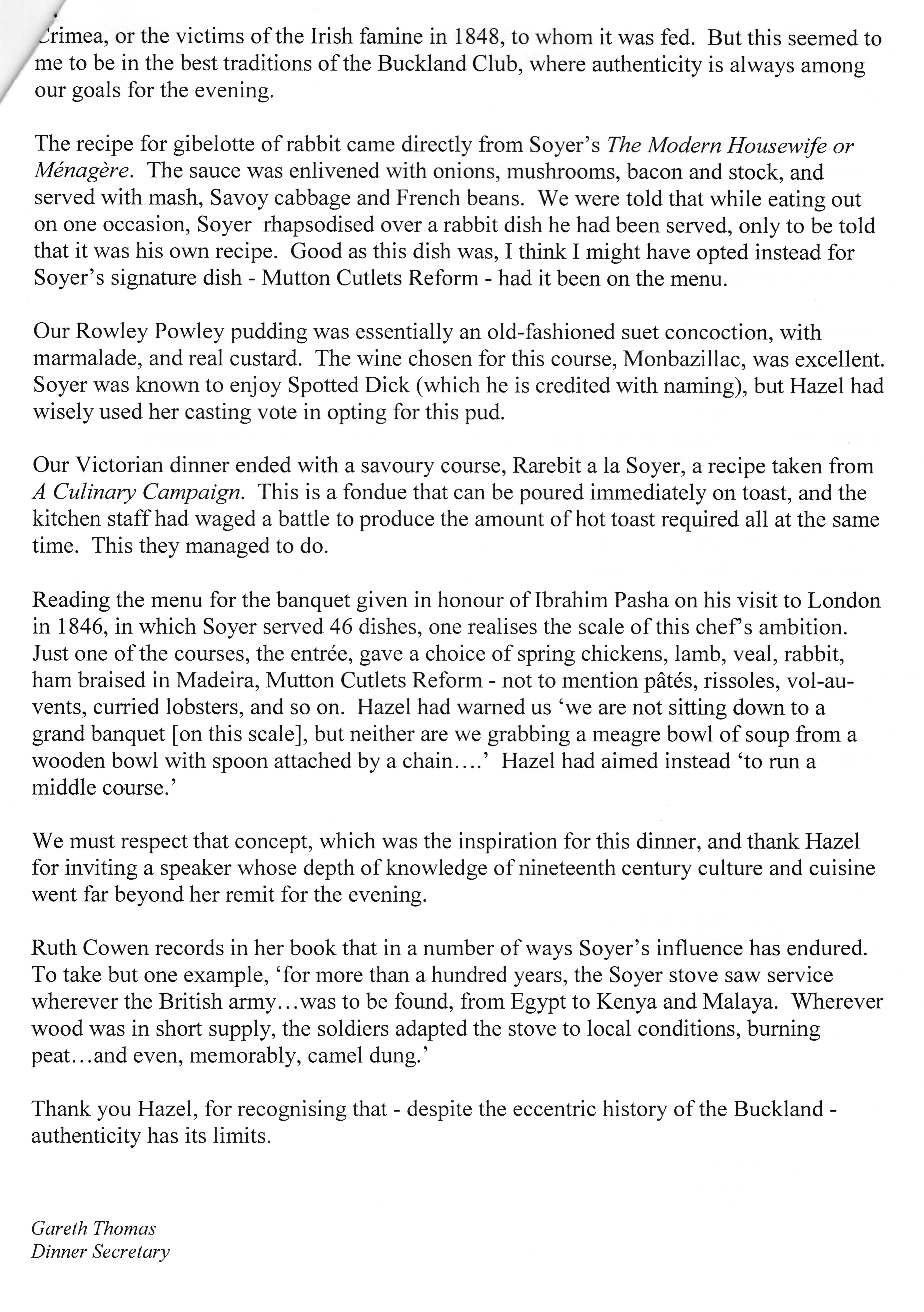