Minutes of the Three Valleys Dinner

Our dinner was sponsored by Michael Brewer, who had put in many months of mouth-watering research to source the ingredients from local producers along the Wye, the Monnow and the Usk, an area rich in such fare.  He was joined by Tom Innes, a wine merchant and shipper based in Monmouth, whose company’s name is Fingal-Rock.  We were indebted to Richard Corbett for the illustration on the front of the menu card.  Richard also displayed some of his paintings of the Monmouth area to set the scene for our dinner. 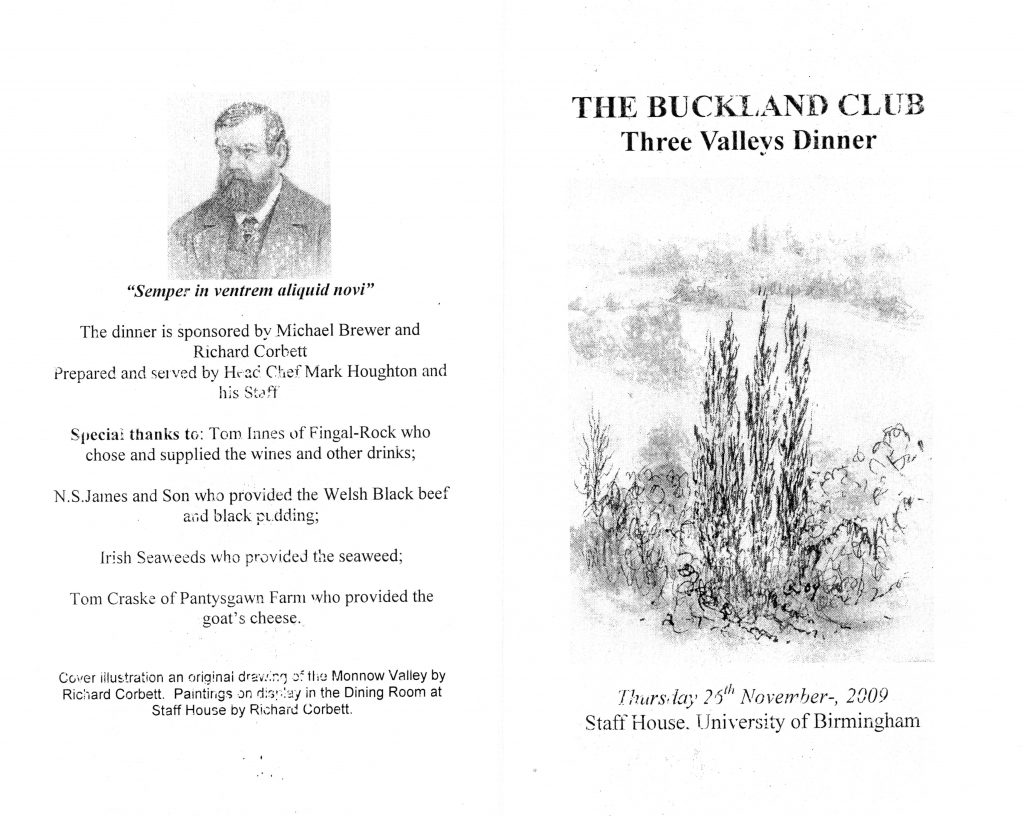 Michael had received a message from John Buckland pointing out that Frank Buckland had spent many a happy hour fishing the Usk, as well as introducing 700 Rhine Salmon to the Wye in an attempt to improve the run of fish in the spring.  We were invited to consider our founder’s metaphysical presence at our shoulder as we attacked the meal.

The rivers in question vary considerably in nature. The Wye, at 185 miles long is one of the best rivers for salmon fishing in the UK, outside Scotland.  It is also designated an Area of Outstanding Natural Beauty, as Wordsworth found when he visited the valley.  He was obviously enthralled by what he saw, and declaimed:

How oft in spirit have I turned to thee,

How often have I turned to thee!

The Monnow and the Usk are smaller rivers but equally rich in fish. A dramatic illustration of fishing in the Monnow comes from the diary of the Reverend N. Eagles, who over a period of 20 years recorded 18,000 trout from the river to his own rod. One can only assume that his sermons were on the short side.

In 1794, the principal gentlemen (yes, gentlemen) of Monmouth and its vicinity decided to meet on a weekly basis “for the purpose of dining together and spending the day in a social and friendly manner.”  Shades of the Buckland?  They wished for a venue suitable for their meetings, chose a site on the summit of Kymin Hill overlooking Monmouth, and founded the Kymin Club.  On their chosen site they built a round, white tower with kitchens and a banqueting room that still stands there today.  Horatio Nelson took his breakfasts there in 1802. (Whether Lady Hamilton was allowed in we are not told.)

Now, the Buckland Club cannot afford a Round Tower, but it did what it could on November 26th to reproduce the menus and the spirit of the Kymin Club. 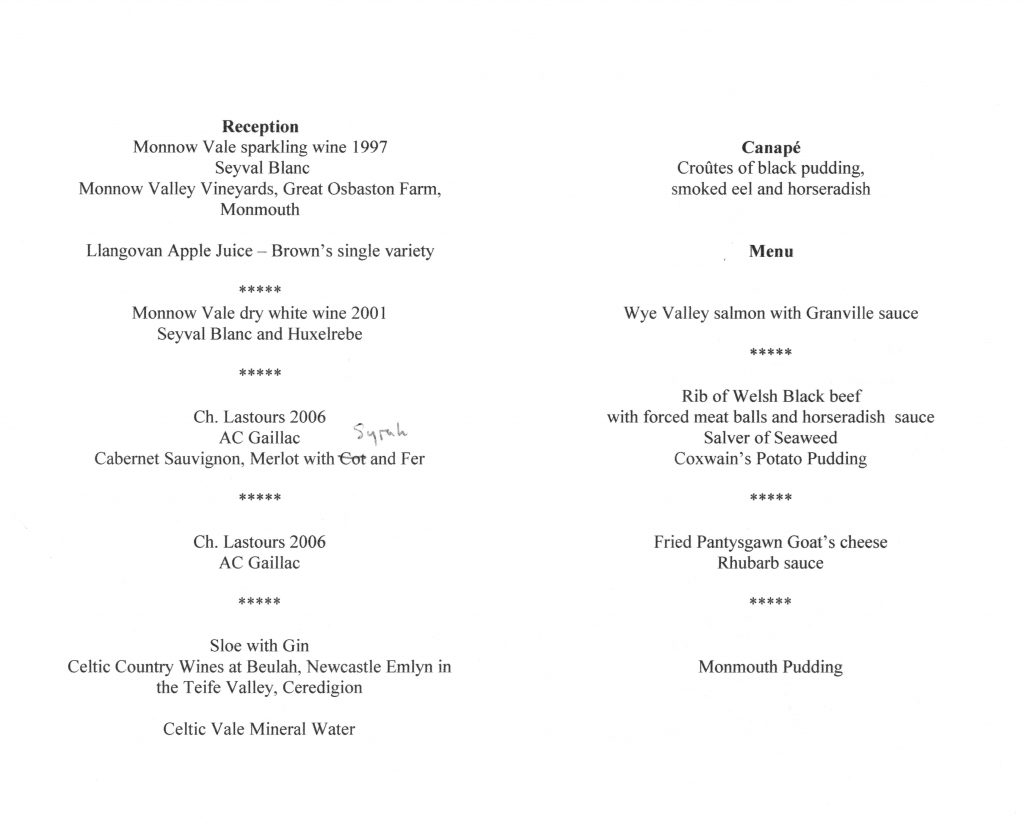 Our evening began with the most delicious croûtes of black pudding, smoked eel and horse radish. The Severn and Wye Smokery used a blend of oak chips and chipped whisky and calvados barrels to smoke the eel. Their efforts were richly rewarded.

The wine was a 1997 Monnow Vale sparkling white, made – Tom Innes explained – from hybrid Seyval grapes, a variety the French tend to sniff at but which is grudgingly allowed by the EU on an experimental basis. Seyval-based wines are reputed sometimes to have a ‘foxy’ flavour, though which part of the fox’s anatomy is involved is not made clear, and in any case our sample proved most acceptable.

The fish course, as we might have guessed, involved salmon from the Wye, accompanied by Granville sauce.  The recipe for the sauce originated in a nineteenth century cookery book by Lady Llanover of Llanover Hall in Abergavenny, and was named after one of her relatives. What led her to associate Granville’s name with a fish sauce is a matter for conjecture.

The wine chosen for the salmon course was a Monnow Vale blend of Seyval Blanc and Huxelrebe. The latter is a high-yielding German grape variety, high in acidity and low in alcohol, often used for dessert wines. Many of us thought that a dessert wine would have been a better use of this grape, because this wine did not do justice to it.

On a much more positive note, the pride of the evening was the rib of Welsh Black beef, sourced from N. S. James, a rare breeds specialist butcher in Raglan, in the Usk valley.  There was unanimous approval, not only for the quality of the beef but also for the perfection of the roasting. Its accompaniment was Coxswain’s potato pudding and a seaweed (sourced, treacherously a Welshman would conclude, in Ireland, of all places). There being no suitable red wine produced in the Three Valleys, we resorted to an attractive 2006 Gaillac, which lasted us through the cheese course also.

Our cheese came from Pant-Ysgawn farm near Abergavenny, which markets under the name Abergavenny Fine Foods. Made from pasteurised goat’s milk (without rennet), it had a fromage frais texture and a mild, citrus tang. It had been fried, and was served with a rhubarb sauce. Incidentally, the Tesco’s buyer has discovered the merits of this cheese too, and you can now buy it in selected stores. 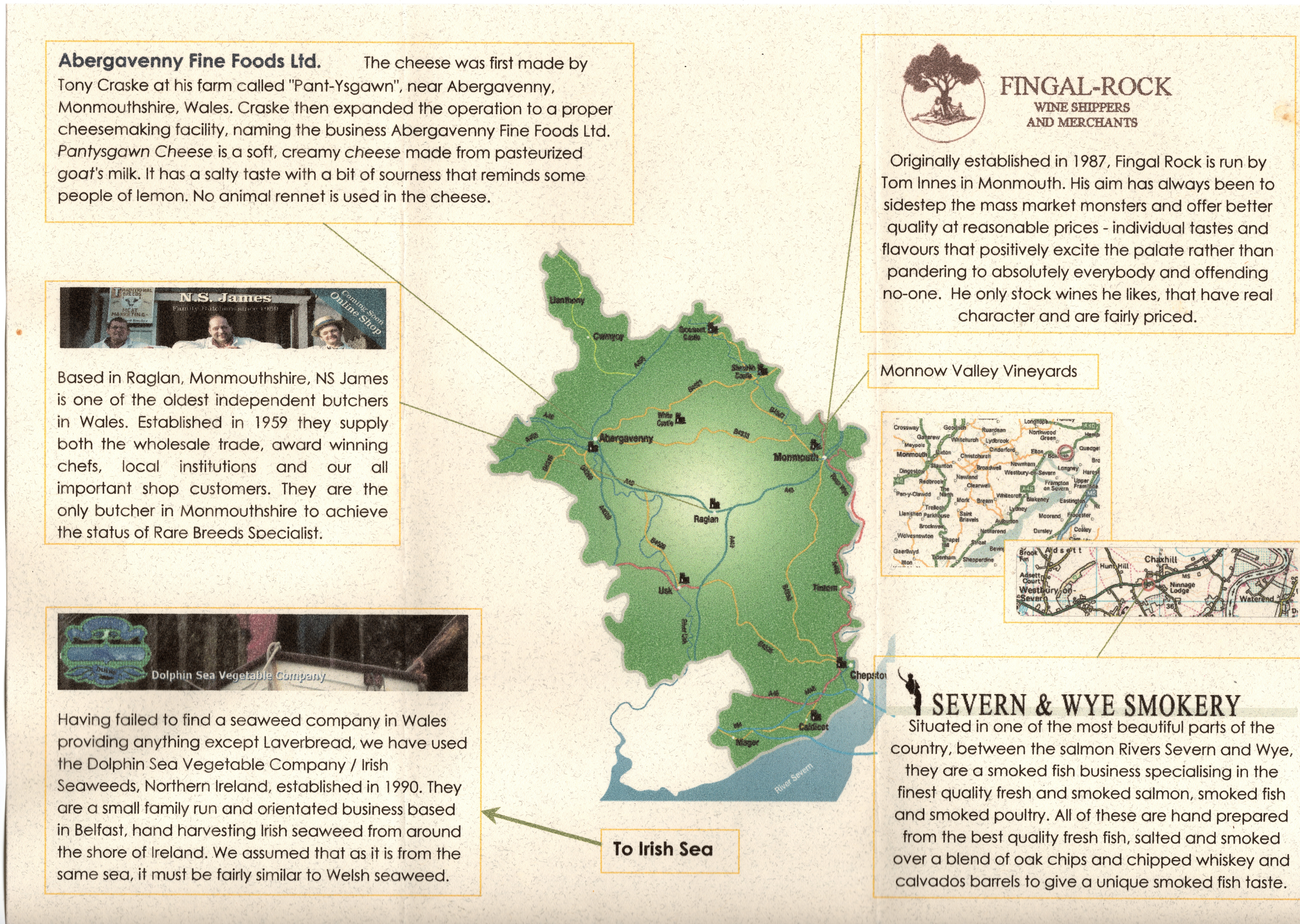 Our pudding was a version of Queen’s pudding, but with a meringue that covered the whole dish. This was Monmouth pudding. When I checked the internet for the recipe for this dessert, a drop-down menu asked me for my weight and height and offered to work out my Body Mass Index. Seriously.

Our spirited evening ended on a spirituous note. The sloe gin came from Ceredigion, West Wales, where it is enjoyed by the locals now, even on Sunday. It was the culmination of a most enjoyable dinner, for which we offer thanks again to our imaginative sponsor, Michael Brewer.