A Minoan and Mycenaean Dinner 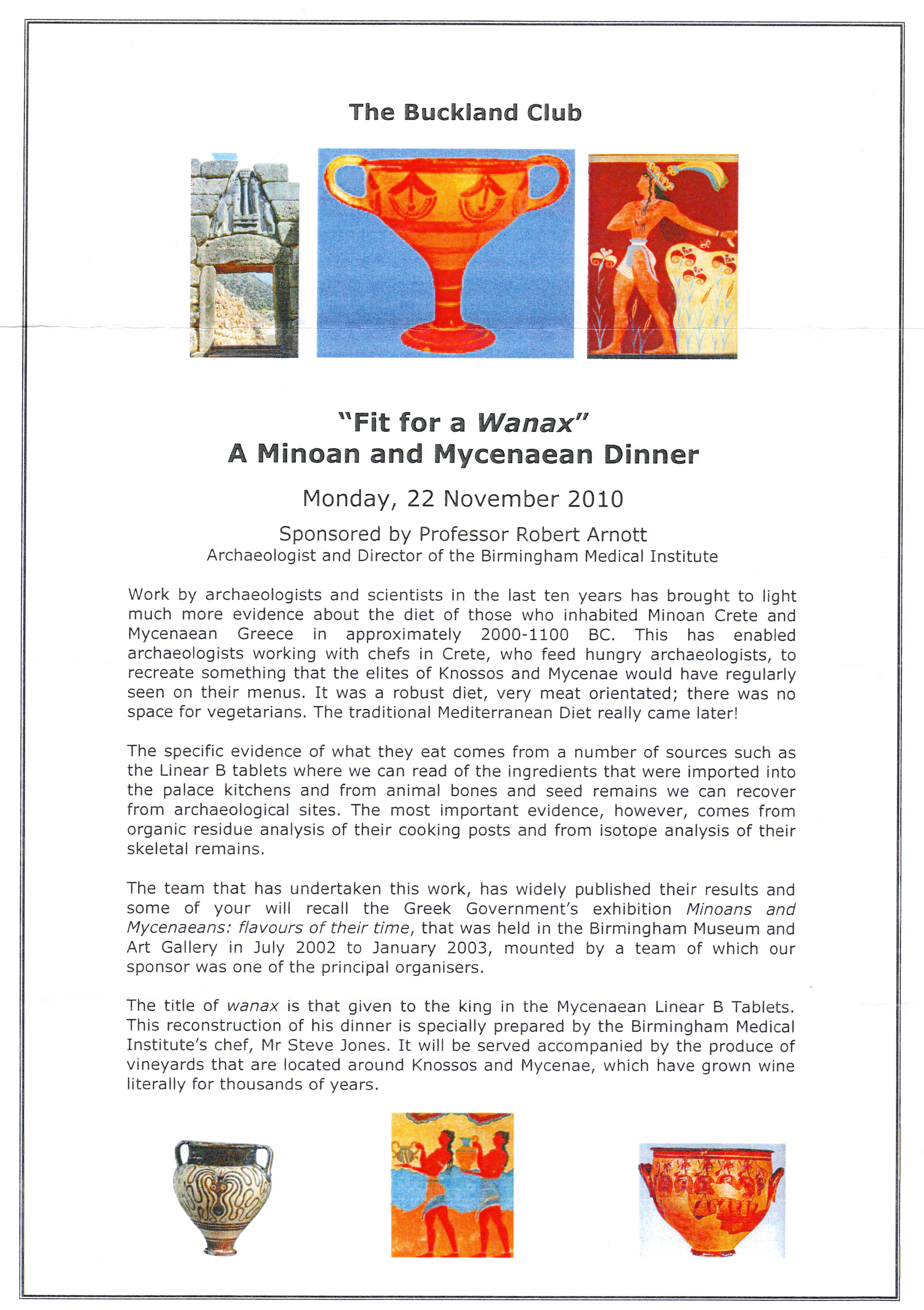 Minutes of the Minoan and Mycenaean Dinner

73 members and guests assembled on November 22nd, 2010 at the Birmingham Medical Institute for the autumn dinner of the Club. The theme of the evening was ”“Fit for a Wanax”, A Minoan and Mycenaean Dinner, The sponsor, introduced by our Chairman, Roger Hale, was Professor Robert Arnott, Archaeologist and Director of the Birmingham Medical Institute, also Former Professor of the History and Archaeology of Medicine at Birmingham University.

The choice of venue was appropriate to the occasion, since some of the evidence for the food that we were about to eat was obtained from an analysis of human remains.  We learnt of this from the polished pre-prandial PowerPoint preamble from the sponsor who gave an account of how he and other archaeologists had characterised the diet of the Minoans and Mycenaeans, including an analysis of the stable isotope content of bones from long-departed humans. This was in addition to identifying the ingredients used in the palace kitchens from reading Linear B tablets. Further evidence of the diet consumed in Crete and Greece of this time (approx 2000 – 1100 BC) was provided by animal bones and seeds recovered from archaeological sites as well as from an analysis of the organic residues of cooking posts. In setting the scene for what we were about to eat our sponsor graciously listed the names of his collaborators and presented the chef, Steve Jones who, with his staff, had prepared the food and who was duly applauded in expectation, fully realised, of the treats to come. 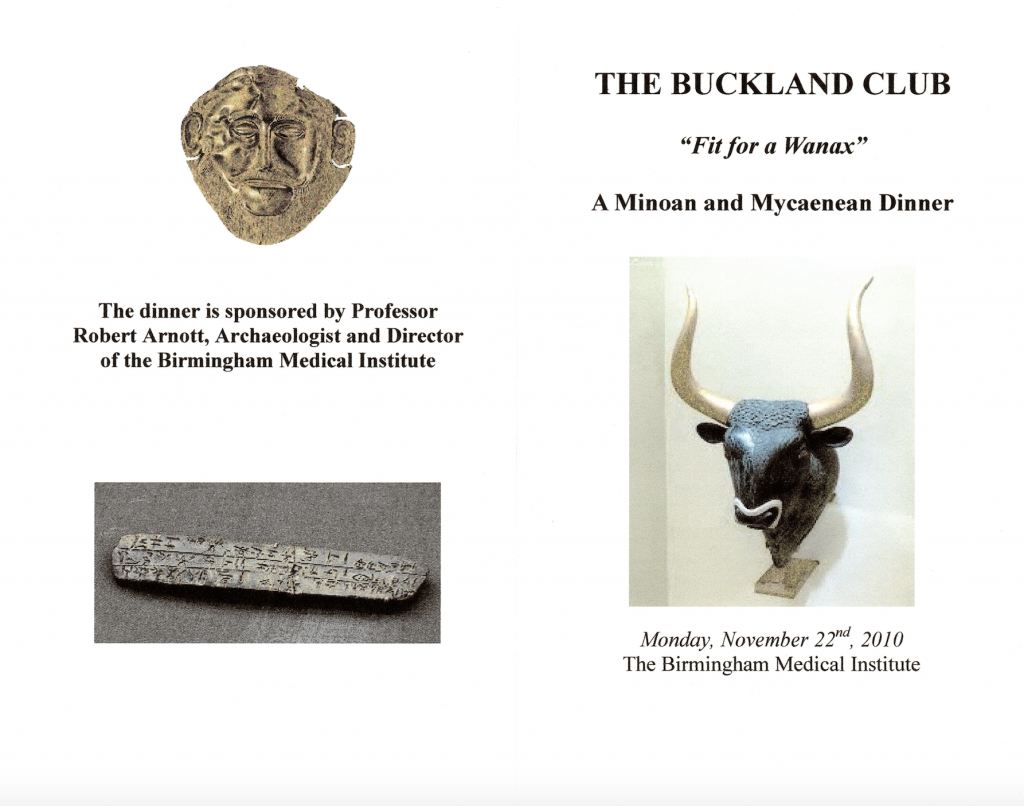 This introduction took place once we had sat down to dinner. Prior to that we were treated to a delicious King Minos, a Wanax, Greek for “King”, of the title, cocktail., more of a wine cup than a cocktail. This mixture, still consumed in Greece but dating from ancient times, was usually diluted with water. We learned that the basis was a white wine to which had been added mint, honey and ripe pear. The wine was Greek but the mint, pear and honey local, the last coming from Harborne rather than Hymettus.

The meal, we were told, would keep strictly to that which was available to our Grecian ancestors. So there would be no potatoes.  Moreover, although the front of the menu was adorned with a bust of the head of the Bull of Minos, the thrust of the evening was to be confined to the archaeology of the era; mythology would be not included, thus emphasising the sponsor’s dictumthat evidence had to be the guiding light for our journey into the past. 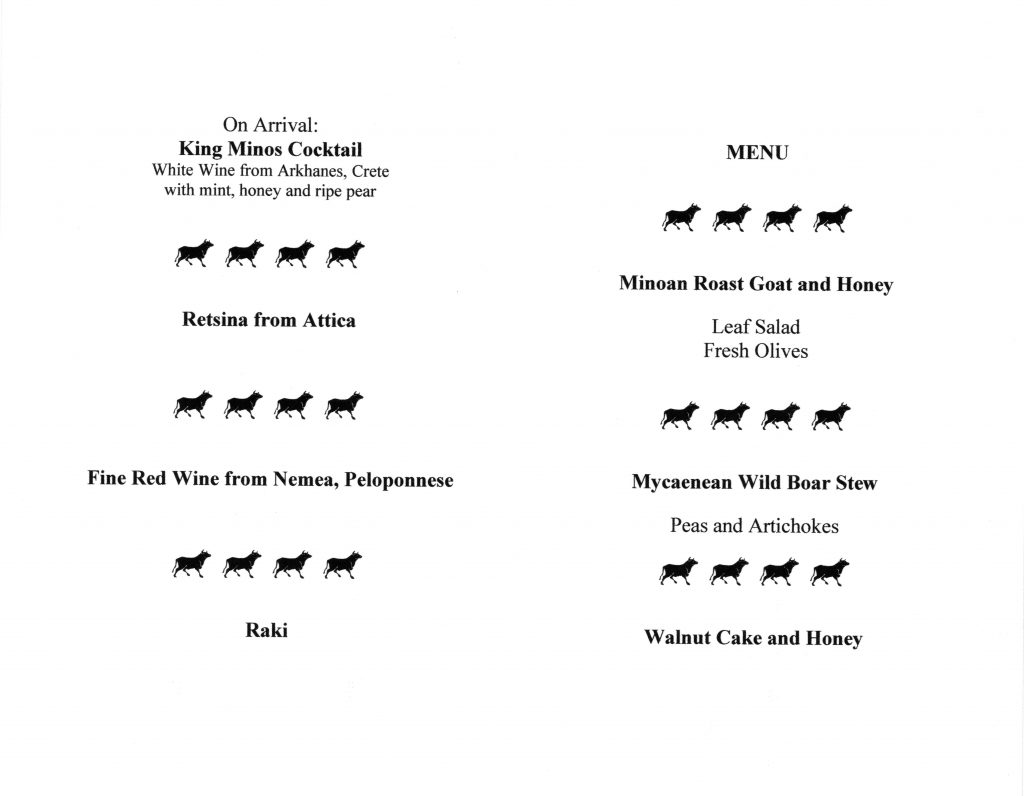 The first course was Minoan roast goat – no kidding! – and honey, accompanied by a leaf salad and olives. This was followed with a Mycenaean wild boar stew, peas and artichokes. The boar was anything but boring, we did not choke on the artichokes, so there was no need to be appeased by the peas. Indeed it was a delicious confection. The Mycenaeans clearly knew how to live. The dessert was a walnut and honey cake. As judged from the near ubiquity of this last ingredient, one might think  that the ancient Greeks used honey as the glue that kept their diet together. Those bees must have worked overtime. Aristophanes wrote The Wasps. Was it ever partnered by a play, now lost, called The Bees?

Accompanying the food were two wines, a white with the goat and a red with the boar. The first was a Retsina from Attica, so called because of the pine resin added to the must. The second was from Nemea in the Peloponnese.  We were told that increasingly Greek winemakers were planting international varieties of grapes, such as Syrah and Cabernet Sauvignon. However that downed at the dinner was made from the native Aghorgitiko, the only grape allowed in Nemea.

At the end of the meal, as the sponsor was unable to obtain the digestifof his choice, we each had a glass of Ouzo, issued with an instruction that “we should knock it back” but we were not to dilute it. Horribile dictu  a perfect evening was almost soured for those at one table when they observed that two members had disregarded this injunction by adding water. I shall forbear to give their names, one because of gallantry, the other simply out of loyalty. Mind you, it did taste like cough medicine.

After the meal, Harlan Walker, our esteemed President and Honorary Member, told us of his family associations with the Medical Institute, once a private house, and of the goings-on there, among which was a liason between housemaid and chauffeur. Ah, those were the days!  – Upstairs, Downstairs, rather than of liasons.

The evening ended with the Chairman thanking our Sponsor for a scholarly, entertaining and instructive evening, giving us a truly Buckland occasion – food, wine and learning, a perfect recipe for good companionship.