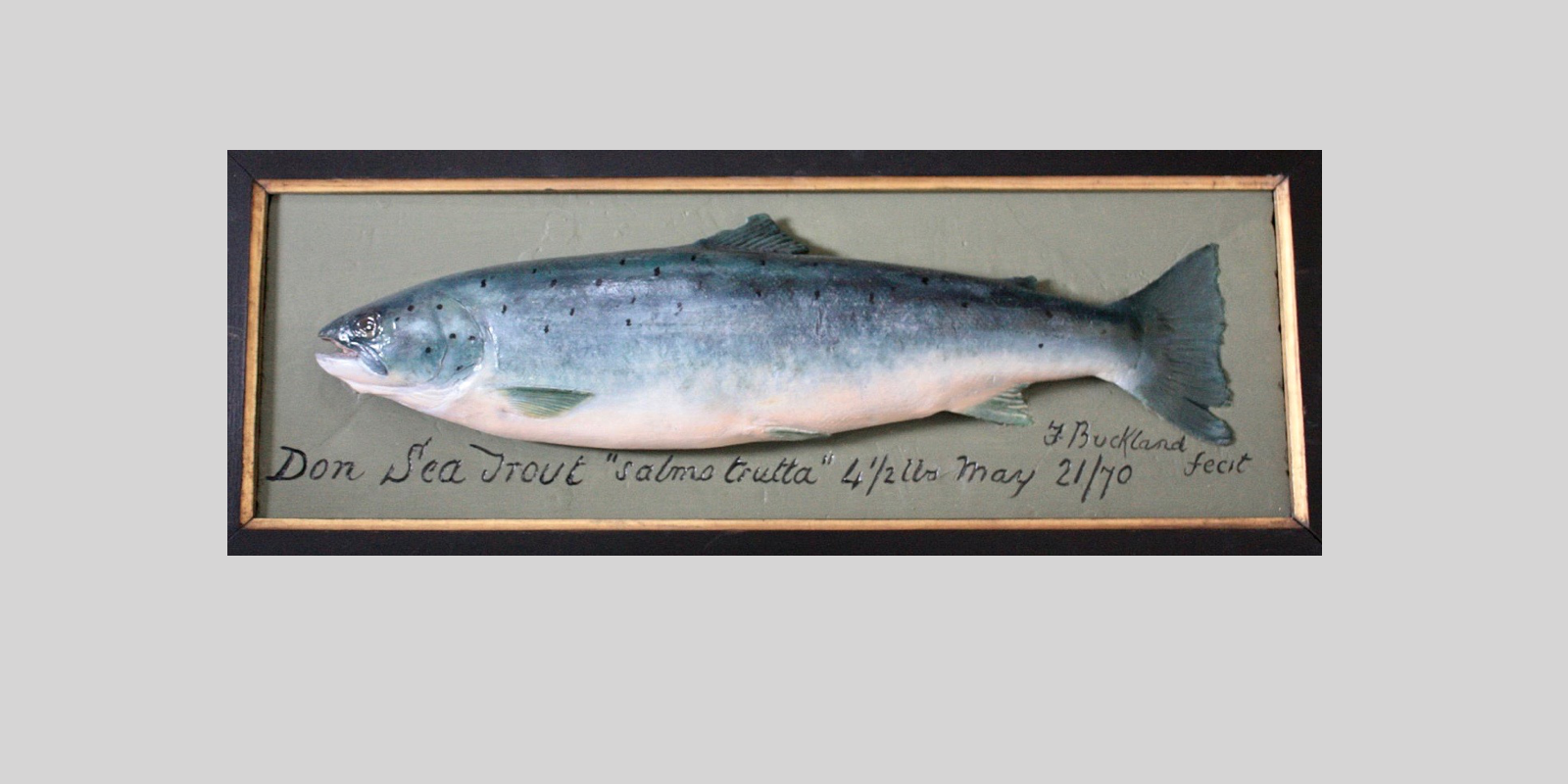 Members were informed of the dinner with this flyer: 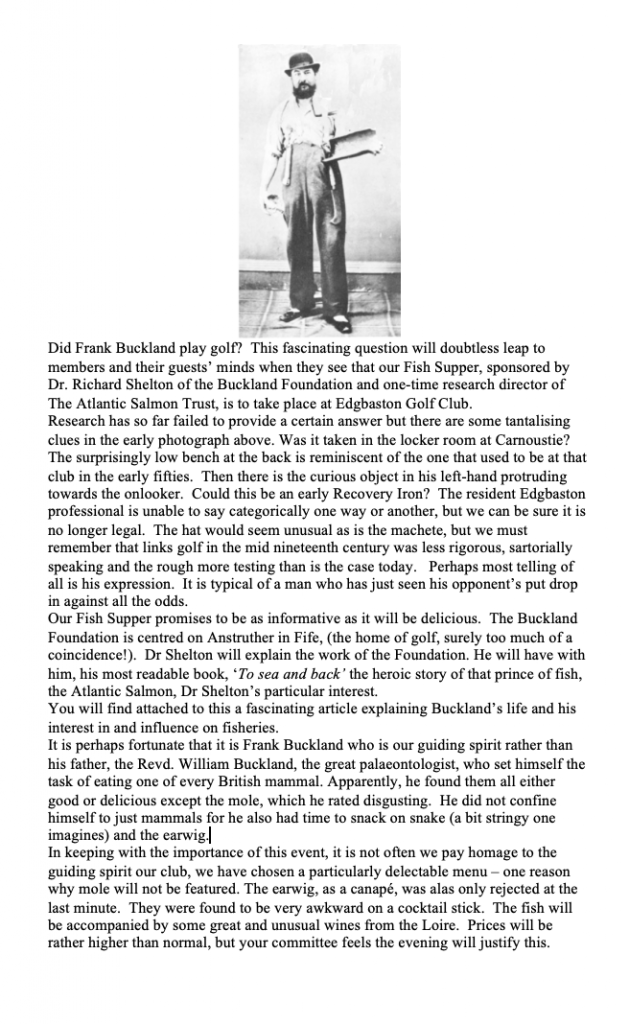 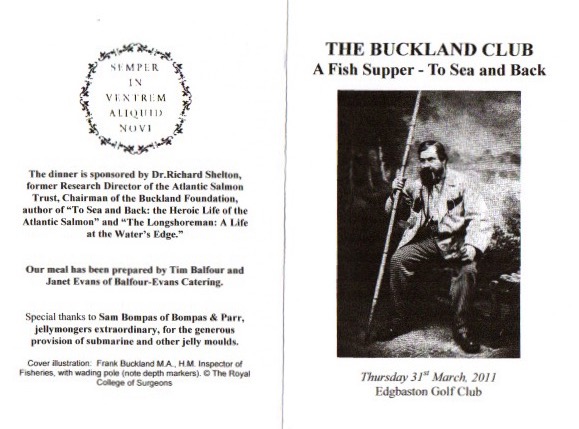 The minutes of ‘A Fish Super’

Members and their guests crowded into the club bar in eager anticipation of a dinner billed to be entirely devoted to consumption of fish.

This theme seemed appropriate as Frank Buckland had been an Inspector of Fisheries by royal appointment.

The pre-dinner canapés included a diverse range of fishy delights – Smoked Eels, Salmon Roe, Seared Tuna and Sea Urchins. All these were popular and were consumed with great enthusiasm.

The canapés were accompanied by black velvet cocktail as an aperitif. I am not very keen on black velvet and so asked if I could have the champagne on its own without the Guinness. I was politely but firmly told by the waitress that this would not be appropriate and that water would be the only alternative – so I complied. I have to say the black velvet did go rather well with the canapés – especially the sea urchin.

Our Chairman encouraged us to view an unusual artistic installation as we entered the dining room. This would not have looked out of place in the Tate Modern. The display turned out to be Jelly; or I should say jelly turned out – from various moulds all with an aquatic theme.

Dr Shelton said grace – Our principal guest this evening may be interested to know that Frank Buckland had been of a high church persuasion, following the ways of his father the Very Reverend William Buckland who had been one time Dean of Westminster and a Canon of Christ Church Oxford.

Our sponsor gave us an illustration of a practical combination of both father and son’s churchmanship with their omnivorous characteristics by recalling a visit they had once made to a European cathedral where they were shown a reoccurring stain of a martyr’s blood on the flagstone floor – Buckland senior had dropped to his knees on the sight of this and kissed the spot only to get up again and pronounce that the stain was nothing other than bat’s urine.

Thankfully to my knowledge this particular substance has never appeared on any of our dinner menus. 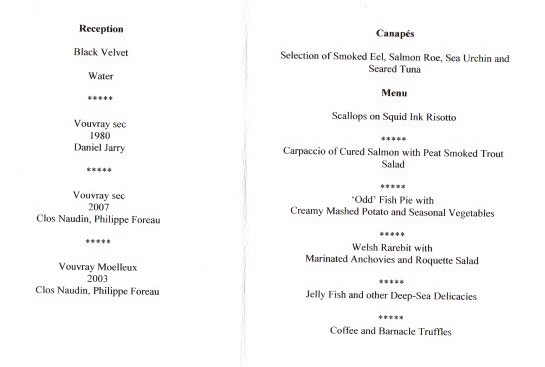 Our first course arrived. Scallops resting on squid ink risotto. The recipe was a great combination in terms of colours with the delicately seared scallop set off nicely against the dark risotto rice and it also tasted delicious.

Following this we were served a capriccio of cured salmon with peat smoked trout. Ecologists among us were alarmed by the revelation that the fish was not wild but had been sourced from a fish farm. Dr Shelton assured us that this was not a problem. He said the farm off the island of North Uist has the best reputation for rearing salmon in a way that closely resembles the creature’s natural life cycle and diet.         We relaxed and enjoyed the dish happy in the knowledge that we were not unduly contributing to the degradation of the wild salmon population.

Dr Shelton remarked that he had lived for some time on this island in a small hut during his studies of the Salmon. The owner of the island Lord Fergus found him there one day and rather bothered by the Spartan living conditions had asked him over to his house for dinner.

Dinner invitations in time apparently became a regular thing but our sponsor remarked that whilst the gesture was very much appreciated, the dinners became monotonous – principally because the food always tasted strongly of whiskey.

Our main course was “Odd Fish Pie”. We delved below the creamy potato topping with our forks angling for the odd fish. What were these odd fish we wondered? We hoped not as odd as strange creatures that Dr Shelton told us about dredged up from the depths of the North Atlantic when he was on board trawlers investigating the salmon’s feeding grounds; He told us of catching the unpleasant looking Black Scabbard Fish with their sharp fangs and also of a very unusual creature called a crinoid or colloquially a Sea Lilly which although looking like a plant he said was actually an animal. Our pies and the odd fish – whatever they were – were happily very tasty. Dr Shelton gave us some un-censored literal recitals of the vocabulary of the various trawler captains that he had worked with – such as old seadog from Hull who went by the name of Shnoz. The various Anglo-Saxon expletives used by this chap when he suggested where he thought Dr Shelton might like to put various dredged up exhibits from the sea bed, I think are best not repeated in present company.

Our sponsor did later express the hope that ladies present had been revived following the shock of hearing his salty tales of life afloat. However, I had heard that such was the profanity of Old Shnoz’s language – it was not only ladies present who had needed the administration of smelling salts.

A savoury course followed our Odd Fish Pie – Marinated anchovies on welsh rarebit and following this the jelly we had admired on entering the dining room was served for our pudding.

Our Chairman introduced this final course giving his thanks to Sam Bompas of Bompas and Parr – jelly mongers extraordinary – for the generous provision of submarines, sea horses, star fish, octopuses and other interesting jelly moulds.

The jellies had various fruity flavours and all were liberally laced with alcohol including Eristoff Black – a vodka based fruit cordial.

On the subject of alcohol – Our Chairman, who has a passion for the Loire had selected some excellent wines to go with our various dishes. Our starters were accompanied by a superb 1980 vintage Vouvray. We kept to the theme for the main course and jellies with some more youthful versions of the same.

Following coffee and barnacle truffles – chocolate truffles in the shape of barnacles, not made out of barnacles – thankfully, our Chairman asked chefs Tim Balfour and Janet Evans to take a bow to allow us all to show our appreciation.

We were also invited to purchase signed copies of Dr Shelton’s latest book “To Sea and Back: the Heroic Life of the Atlantic Salmon”

We departed the Golf Club with our newly purchased books eager to discover more about the Salmon’s extraordinary life cycle – and the strange creatures with which it co habits the oceans – but with an uncomfortable feeling that life on board trawlers in the North Atlantic is definitely not for the faint hearted.

I trust members of the Buckland Club will accept these minutes as a correct – if not a completely literal – account – of a really fascinating evening and a delicious fish supper.