Sponsor: His Grace the Archbishop of York, Dr. John Sentamu

Some have been heard to say that the Biblical Dinner resulted through divine intervention. Whilst there may be an element of truth in this matter, the catalyst for this feast was a more down to earth character. Esteemed local butcher, and member, Roger Brown mentioned in passing that he had previously counted Dr. John Sentamu as one of his prestigious customers. Apparently, during his time as Archbishop of Birmingham, His Grace was a frequent visitor to Roger’s award winning Harborne establishment. As an enthusiastic gastronome he would consult with the staff and peruse the finest cuts. Frequently he would stop to consume tasty morsels prepared on the premises. This seemed too good an opportunity to miss. Introductions were facilitated, and Chairman Roger Hale was instructed to make the necessary arrangements. And it came to pass, when the time was come that the Buckland Club held a Biblical Dinner. 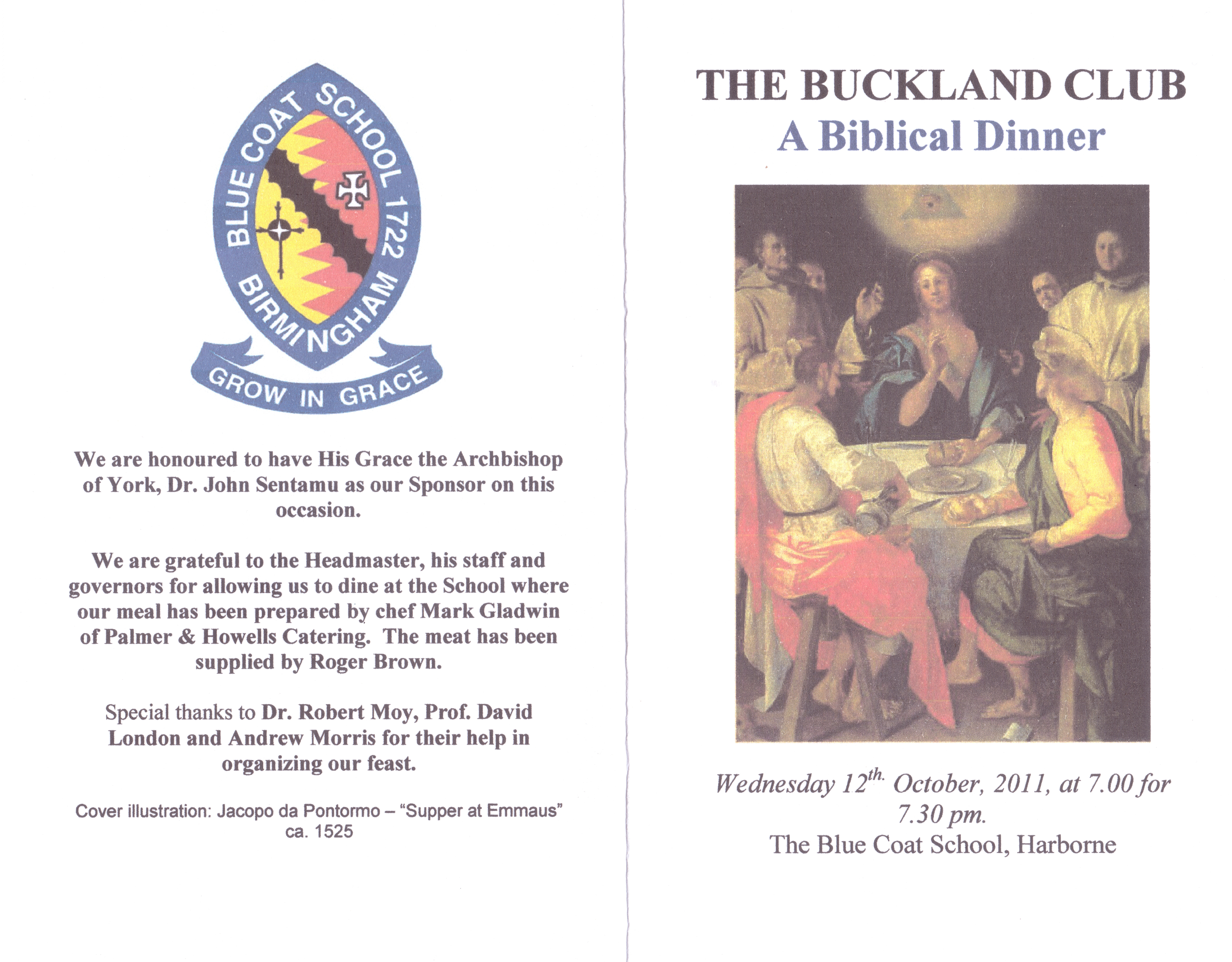 Minutes of a Biblical Dinner

A Biblical Dinner, sponsored by His Grace the Archbishop of York, Doctor John Sentamu, was held at the Blue Coat School, Harborne, on Wednesday, 12 October 2011. Fortunately, the caterers had to provide for only members and guests rather than the 4 or 5000, depending on which Gospel got the numbers right.  As evidenced by the way the dinner was illustrated there was clearly some uncertainty over the size of the attendance. On the one hand, the original notice contained a reproduction of Veronese’s Supper in the House of Levi –  which, incidentally, was painted as a Last Supper until the Church objected to the title,  while the menu card was adorned with Pontormo’s Supper at Emmaus, a much more intimate affair. And during the evening mention was made of Belshazzar’s Feast. The Buckland is much too sober an organization to behave in a manner mirroring this last event, which is fortunate because, as happens after many a night of revelry, it ended in tears.

But to concentrate on the evening itself, we assembled for Canapés and Wine prior to sitting down to the meal. The Canapés were chosen to reflect Old Testament stories , Snake and Apple, in line with the goings-on in the Garden of Eden, Frog’s Legs to remind us of one of the Egyptian plagues, and Stuffed Olives, which, as we were to learn later, were linked with the olive oil that was poured over Aaron’s beard. These were washed down, doing our modest best to follow the spirit of Camp David, with a rather boring mixed varietal Israeli white wine from Carmel Ridge, and a Palestinian red called Star of Bethlehem. There was also pomegranate mentioned in the Song of Solomon and thought possibly to be the original “forbidden fruit”. “Of Man’ s first disobedience…” Back to the snake and apple.

Once at dinner, our Chairman, Roger Hale, formally introduced the Archbishop. Honoured we were to be graced by his presence. Some already knew him personally through his time in Birmingham, including an occasion when he preached at the School, others through his wise public utterances, a national figure held in high regard. We knew could look forward to an evening of intellectual pyrotechnics, and we were not disappointed.

We got off to a good start with His Grace telling us that it was all the Snake’s fault. Very reassuring. There followed other allusions to the preprandialia – “Apple of your Eye”, “Frogs are not clean”. “Bread for the traveller”. “Bread of Heaven”. If only this last phrase had been operational three days later when Wales and France met in the Rugby World Cup. The evening was larded with references such as these. (In view of the dietary laws of the time, there is probably a better word than “larded”). 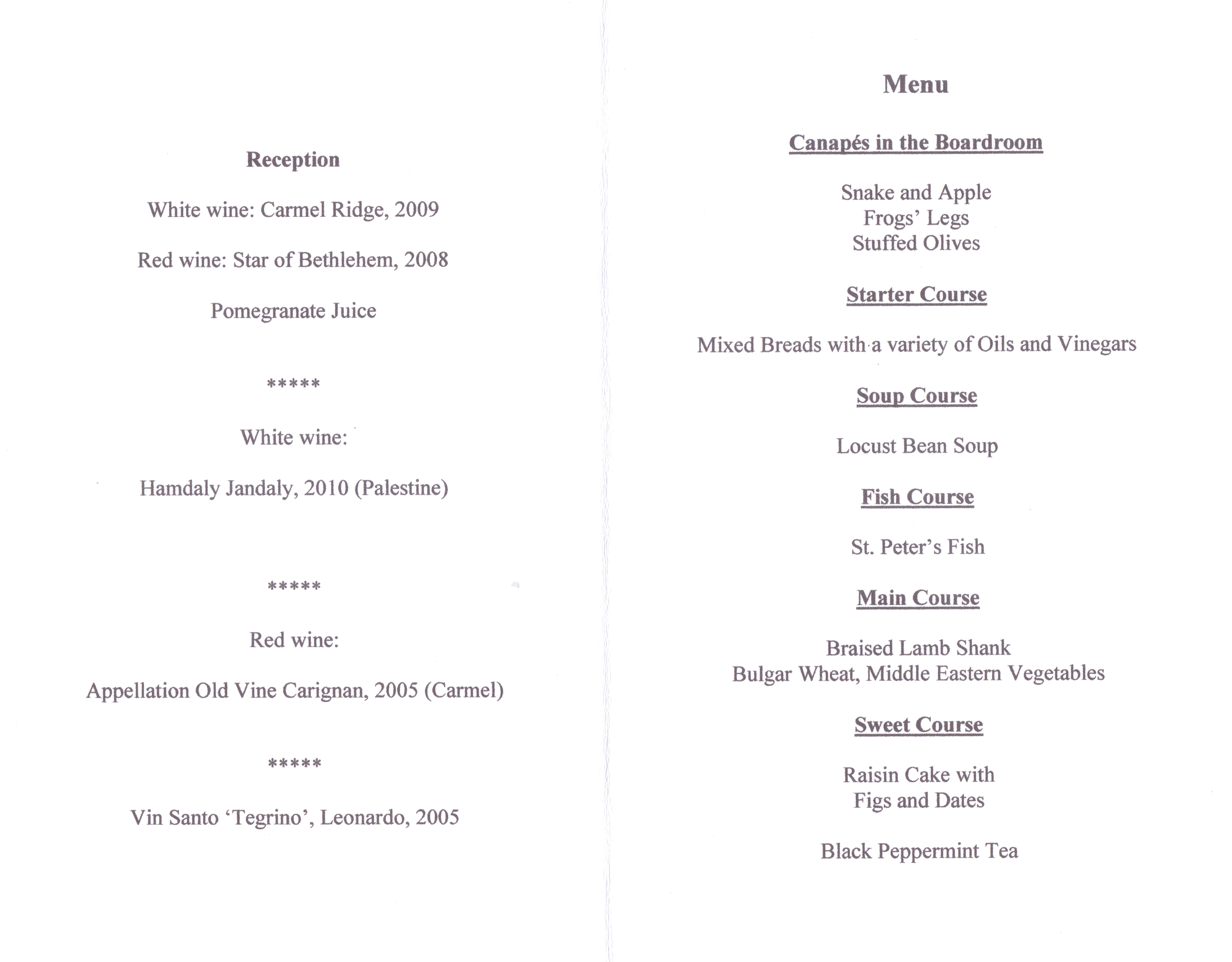 We then continued down the plague route with Locust and Bean Soup, not that there was a plague of beans. The locust – we had one each. I’m not sure whether this was to save on cost or to spare our digestions – looked like a well fed grasshopper and, perhaps fortunately, was utterly tasteless. The beans and the soup were delicious. Accompanying this course was a Palestinian white wine, Hamdany Jandaly, called after its constituent grapes, possibly going back to biblical times, nowhere to be found in the canon of fine varieties, but fresh and delicious nevertheless.

The food then moved on to St Peter’s Fish, also known as musht or tilapia, from the Sea of Galilee. The name comes from the story in Matthew’s Gospel recounting how St Peter caught a fish of this type and found that it had a coin in its mouth. While none of us had the opportunity to see whether this was the case with the current sample, we found it delicately flavoursome , enhanced by a rich, fruity sauce. In his commentary on this the Archbishop reminded us that the fish was a symbol, introduced by the early Christians and still in use today including its application to rear windows of cars. In Greek it is ιχθyς, an acronym which in translation is Jesus Christ God’s Son Saviour. At another level, he told the tale of the Geordie who, while fishing, lost his false teeth overboard. No reference to this in the Bible..

The course that followed was Slow Cooked Lamb Shank, supplied by Roger Brown, accompanied by Bulgar Wheat and Middle East Vegetables. His Grace pointed out that Lamb is a traditional dish eaten at feasts; it gladdens the heart. On the other hand we were reminded that the latest McCartney wedding was vegetarian. St Paul didn’t have good things to say about vegetarians. With the meat came, at least initially, an Old Vine Carignane from the Carmel Vinery, founded in 1882 by a Rothschild – initially, in that it soon ran out and was followed by a very unplanned and unbiblical Australian – wine, that is. The best case that one could make for its appropriateness was that it was a Shiraz and so had a Middle Eastern name, despite DNA evidence that the grape comes from South Eastern France.

The desert was a raisin cake with figs and dates, washed down with a Vin Santo, a reference to the journeys of St Paul. Finally we had Black Peppermint Tea which, we were informed, might have been taxed had the Pharisees got their way. As dinner ended, via the Chairman, we were able to thank Mark Gladwin, the chef, the kitchen brigade and those who served at table, the Headmaster for inviting the Buckland to hold the event at the School, and above all, the Archbishop for gracing the evening with his presence and charm, and for the relaxed, amusing and informed commentary which made it a truly Buckland affair.

Before we sat down to dinner the Archbishop asked that the meal be blessed “ May there be much enjoyment, laughter, celebration”. There was certainly that. And at the end we were sent on our way with words of peace from a man of great faith, an appropriate finale to an evening of humanity, good food, good wine, good companionship and good storytelling, truly honoured that York should have come to Birmingham.