An Evening with Elizabeth David 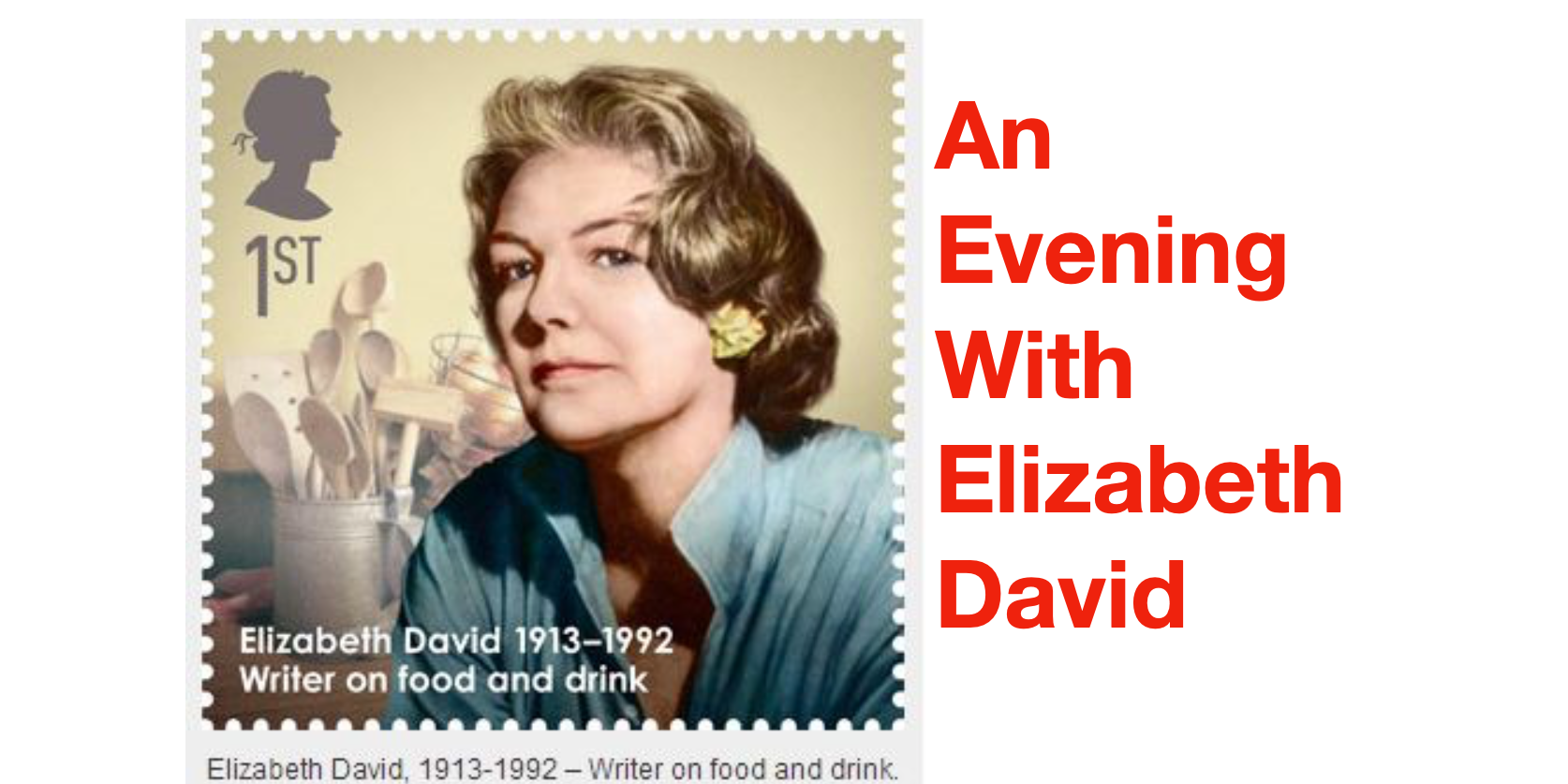 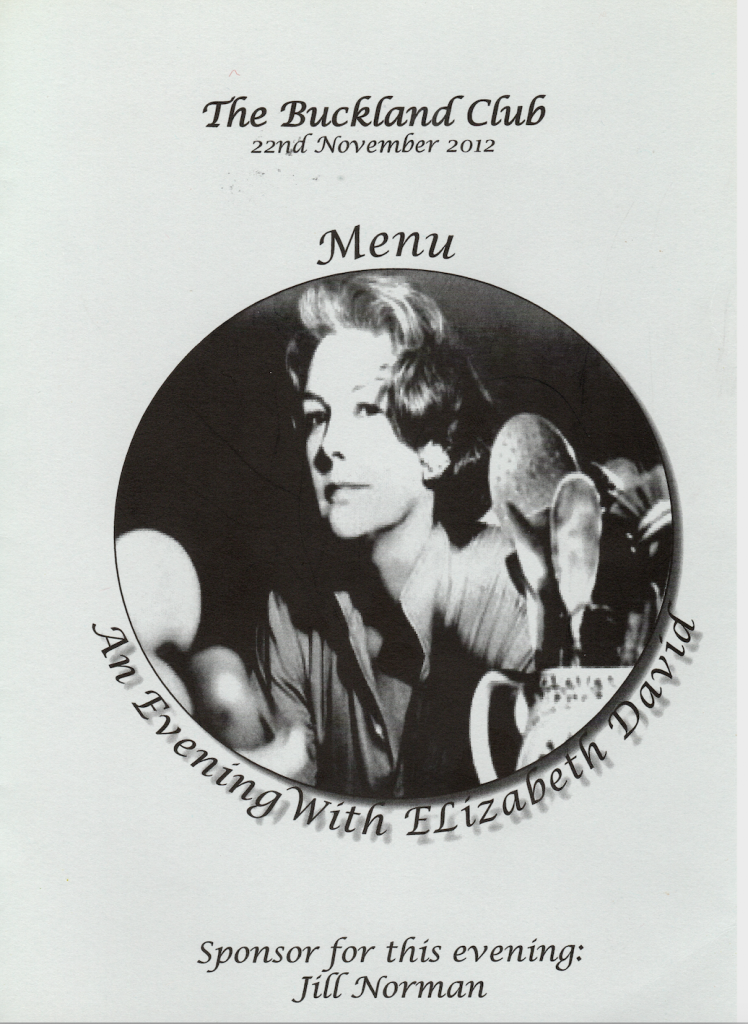 Menu design by UCB students, with help from Hazel Riggall 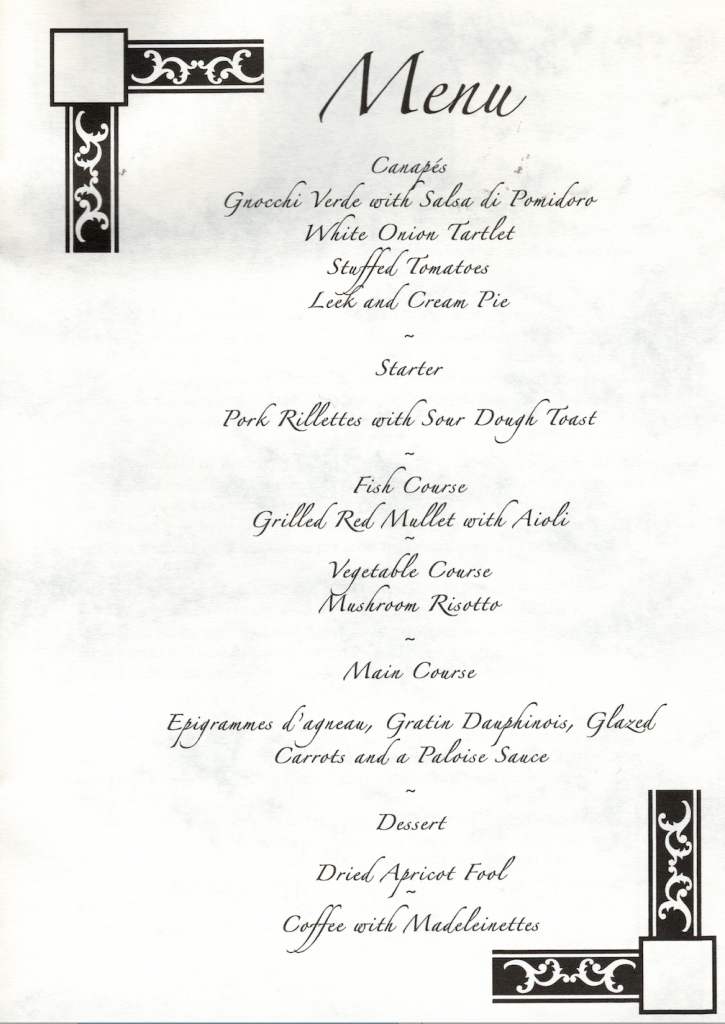 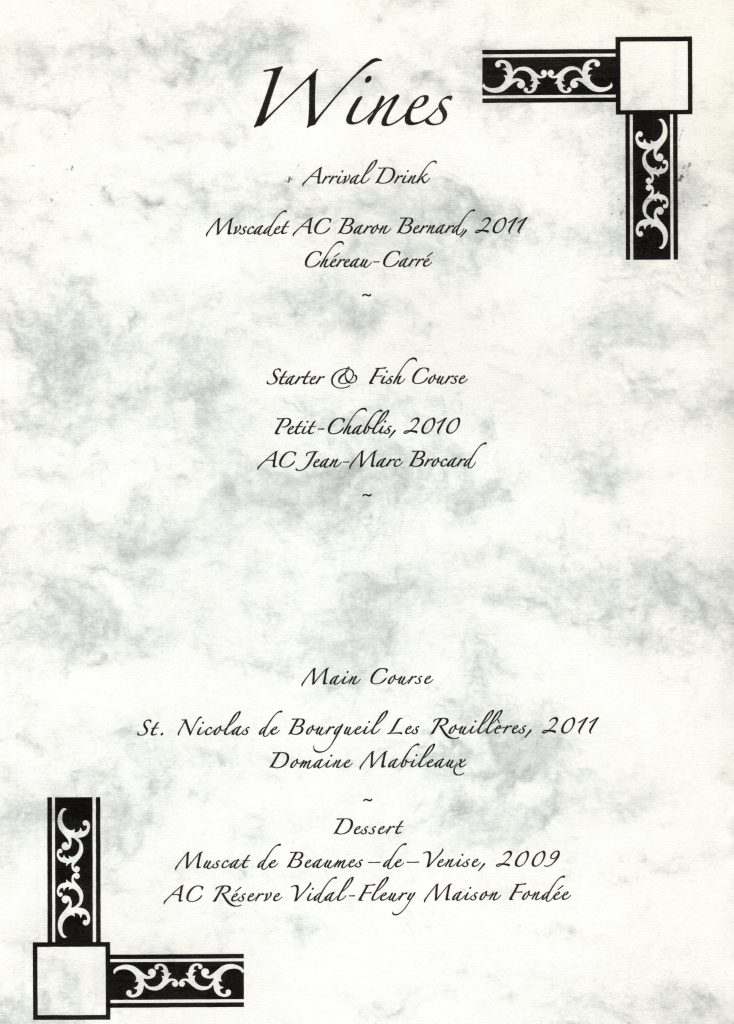 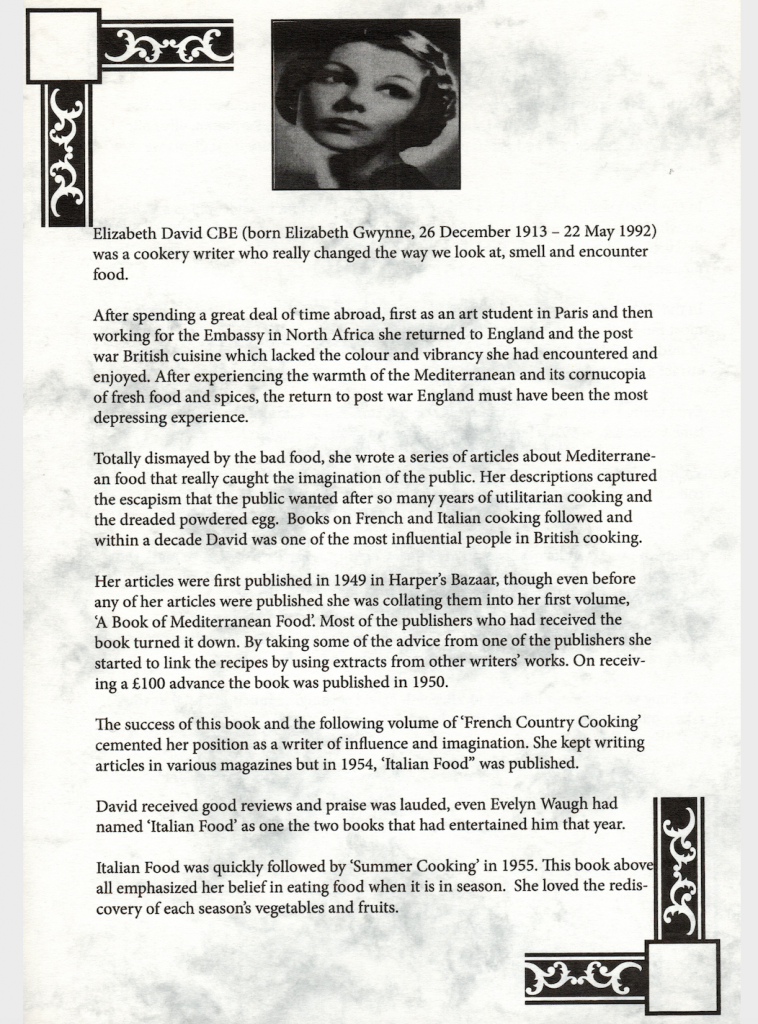 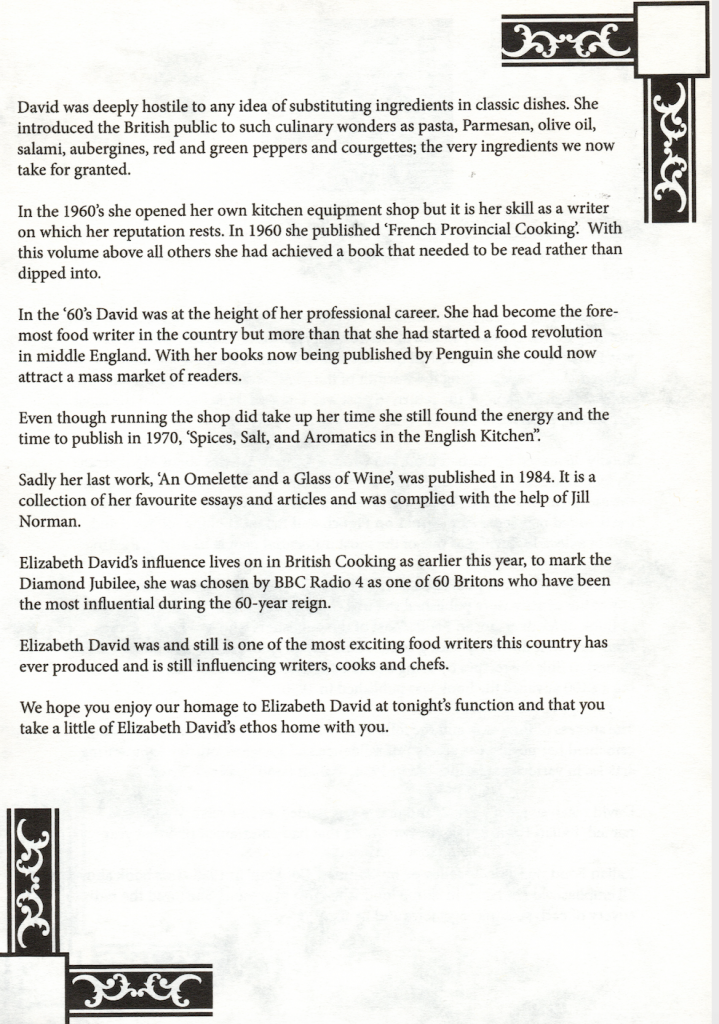 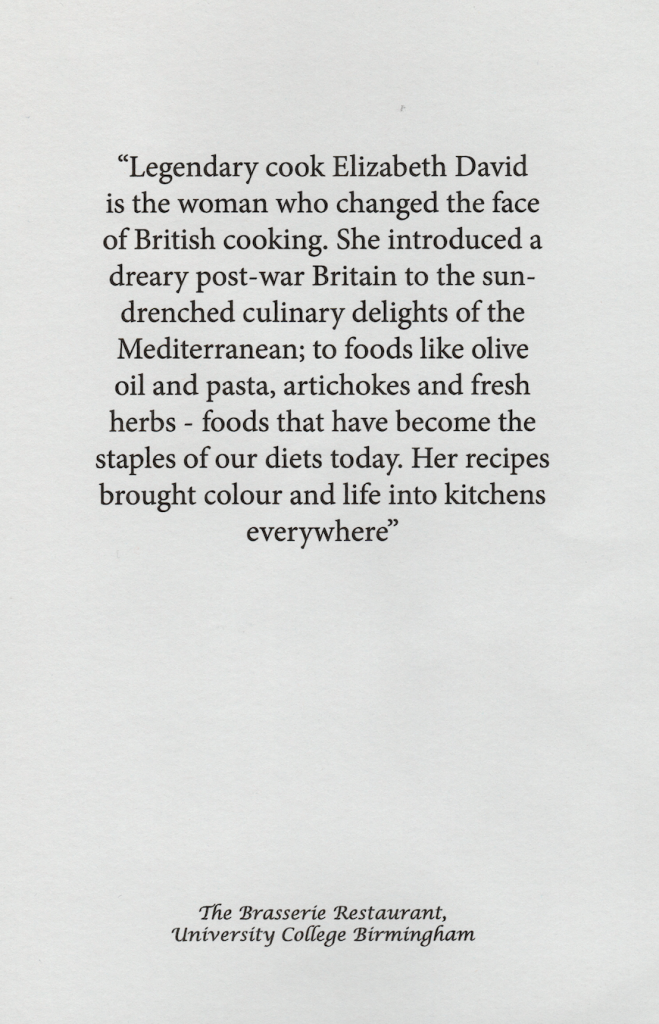 The students at UCB were assisted by committee member Hazel Riggall, who was the driving force behind the idea of a dinner based upon Elizabeth David. Author Jill Norman was an ideal choice as a sponsor, having written extensively on David’s cooking. She was known to others on the committee, especially Harlan Walker, through her association with the Oxford Symposium on Food & Cookery. Jill kindly wrote the minutes for Harlan’s Memorial Summer Party in 2019.

Hazel liaised extensively with the college and Jill. A large number of potential dishes were considered before the final choices were made. For anyone wishing to try their hand at reproducing some, or indeed all, of the dinner the references are given below. 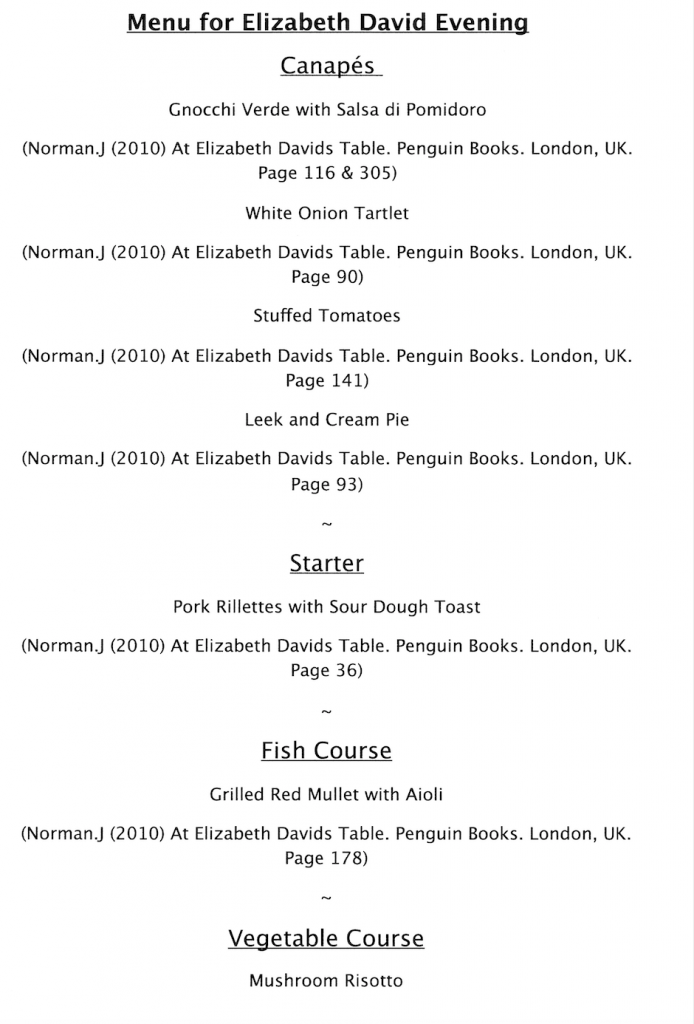 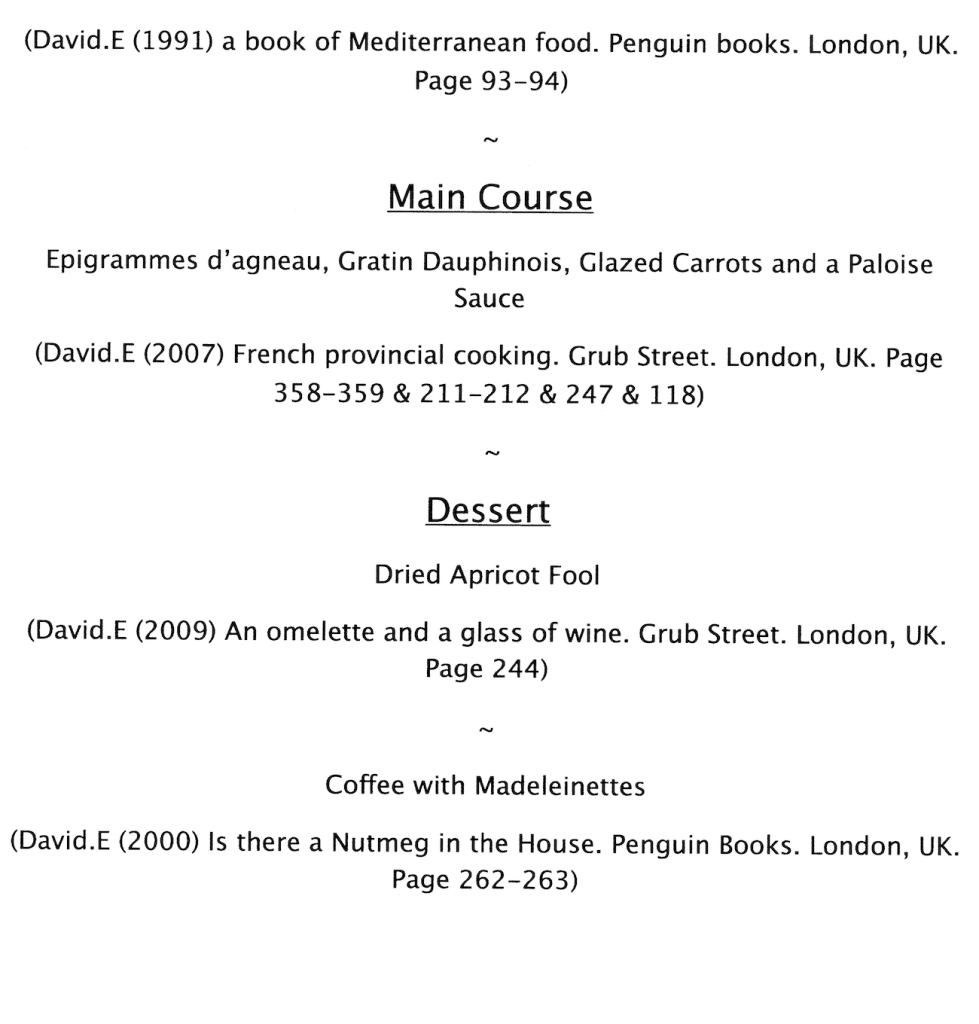 Minutes of ‘An Evening with Elizabeth David’

On November 22nd, 2012, members of the Buckland Club and their guests, 80 persons in all, met at the Brasserie Restaurant, University College, Birmingham for an Elizabeth David dinner, titled “An Evening with Elisabeth David”, possibly a misnomer because she, having died 20 years previously, unfortunately could not be with us. We were however lucky to have as our sponsor, Jill Norman, with her knowledge and expertise, to give us a taste of the seminal contribution made by David to culinary practice in post-war Britain.

Before sitting down, we were treated to a selection of delicious canapés, Gnocchi Verde with Salsa di Pomidoro – in English, tomato sauce, not Heinz, White Onion Tartlet , Stuffed Tomatoes and Leek and Cream Pie.. So good were they and offered in such generous amounts that one wondered whether there would be any room for the meal to follow. Accompanying them was a Kir based on a 2011 Baron Bernard Muscadet, Chéreau-Carré.. There were also soft drinks.

On our way to the table, laid out for our inspection was the extensive collection of Elizabeth David’s books, many of them first editions, belonging to our honorary President, Harlan Walker. An impressive array.  To adapt the words of Brian Hanrahan, there was no need to count them in at the beginning of the evening in order to count them out at the end, nor to frisk the diners as they left, since honesty is one of the conditions for Buckland membership and that of its guests.

Having perused the display, we sat down to dinner whereat Roger Hale, our Chairman, introduced the sponsor, Jill Norman, biographer of Elisabeth David and editor of her works.  Prior to this, Hazel Rigall read us a memoir written by a nurse who had attended David, giving an insight into her extra-culinary personality.

Our sponsor then gave an authoritative account of the life and times of the eponymous spirit behind the dinner. Indeed by the time Jill Norman had finished we felt we knew Elisabeth David well, how and where she acquired her extensive experience and gained an understanding into what it was that made her choose her dishes and write so well about them. The message that came over was that she was a fastidious person, elegant, stylish and without pretension, all of which were reflected in her writing style and the commentaries on her recipes. Essentially, they were for eating round the kitchen table rather than at the grand banquet. As Jill Norman told us, her motto was that of Escoffier, “Faites simple”.

The starter was Pork Rilletes with Sour Dough Toast accompanied by a 2010 Petit Chablis from Jean-Marc Brocard. This wine was also served with the fish course, Grilled Red Mullet with Aioli. Both these courses were elegantly presented. The portions of mullet on the plate would have satisfied any environmentalist, no threat to North Sea fish stocks. The aioli was particularly good.

Next we had a Mushroom Risotto. This too looked good on the plate, with the rice being absolutely à point, not easy to achieve when cooking for 80 people. There were some who thought it too salty. Your scribe did not. Thresholds for the perception of salt vary between individuals.

The main course, which arrived after a suitably continental interval and described in the two languages of the Entente Cordiale,was Epigrammes d’agneau, Gratin Dauphinoise, glazed carrots and a Paloise Sauce. We all know what an epigram is; but what are Epigrammes? They translate as Epigrams, which the Collins English Dictionary define as “short , pungent and often satirical poems”. Fortunately the lamb was not pungent, but being lamb, it would have been short. The Paloise Sauce, the adjective should really have followed the noun, was simply a Bearnaise with added mint. For all the Franglais of the menu, the meat and its accompaniments were tasty and laid out well on the plate. Along with this dish was a St Nicholas de Bourgueil Les Rouilleres 2011, Domaine Mabileaux, a wine which, despite coming from the Loire, had notes of Garriguessuiting it well to the lamb.

The final course was of Apricot Fool. Some thought it elegantly delicate, others short of fruit. With it went a Muscat de Beaumes de Venise, 2009, Vidal Fleury.

At this stage we were introduced to the Kitchen Brigade and to the serving staff, all of whom were students at the College. They were greeted by Club members and their guests with warm applause, richly deserved. The menu was well constructed and presented. Previously, drafts had been sent to Jill Norman so as to be certain that it would lie within the Elizabeth David canon.  It did. There was a challenge for the College in that it had to follow the world, as recorded by David, of dedicated cooks and a small scale cuisine, while catering for relatively large numbers. The College managed to reconcile these conflicting demands. It was able both to scale up the recipes and yet to remain true to the spirit of the writer. a magnificent achievement. And the meal was complemented by the service at table – charming, intelligent and efficient, worthy of a top professional restaurant.

The printed programme, despite the minor solecisms already noted, was another feature of the evening that captured the zeitgeist. The font chosen for the menu and the decoration of the pages were appropriate to the age, there were fine photos of David, a beautiful elegant woman, and there was an informative commentary on her.

After the meal Jill Norman told us something about Elizabeth David’s kitchen and her modus operandi,further fleshing out the subject. Madeleinettes  had been served with the coffee.. Perhaps these will be the experience that, as with Proust’s madeleines, unlocks our Rememberance of Things Past, an evening, that in the words of the Chairman when thanking Jill Norman and the College, brought Elizabeth David to Life.

Perhaps, after all, it truly had been “An Evening with Elizabeth David”.