A Summer Party in Honour of Harlan & Delia Walker 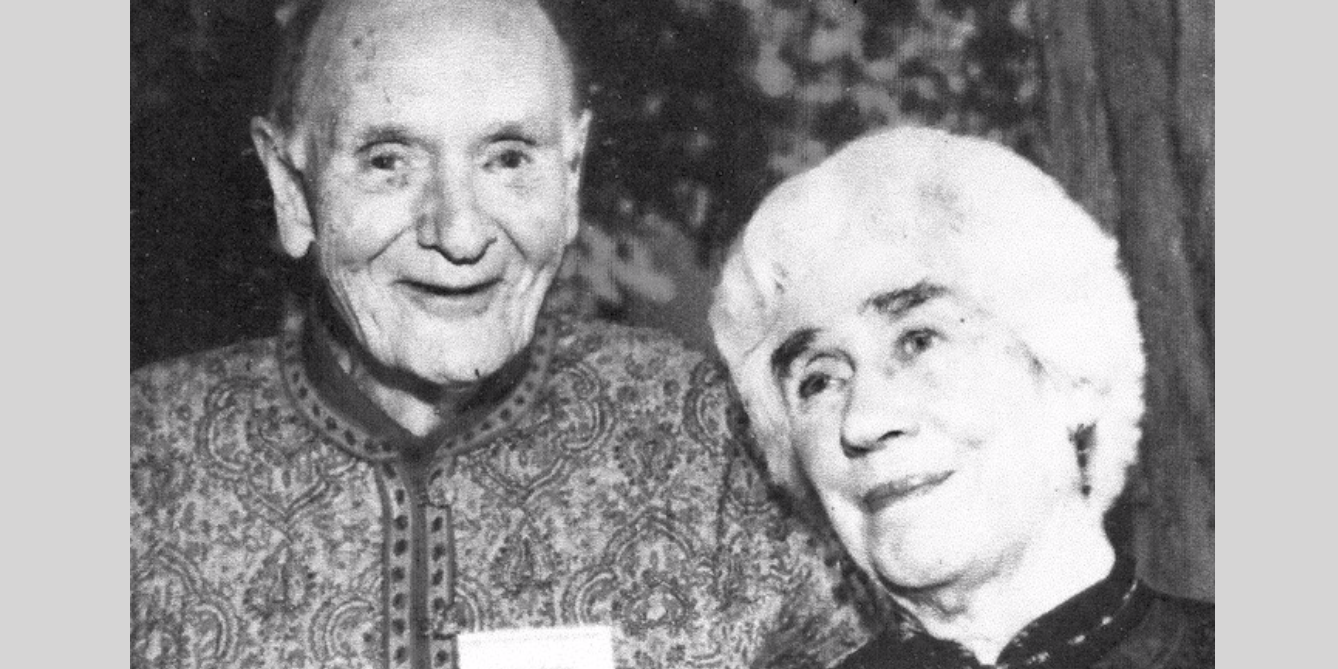 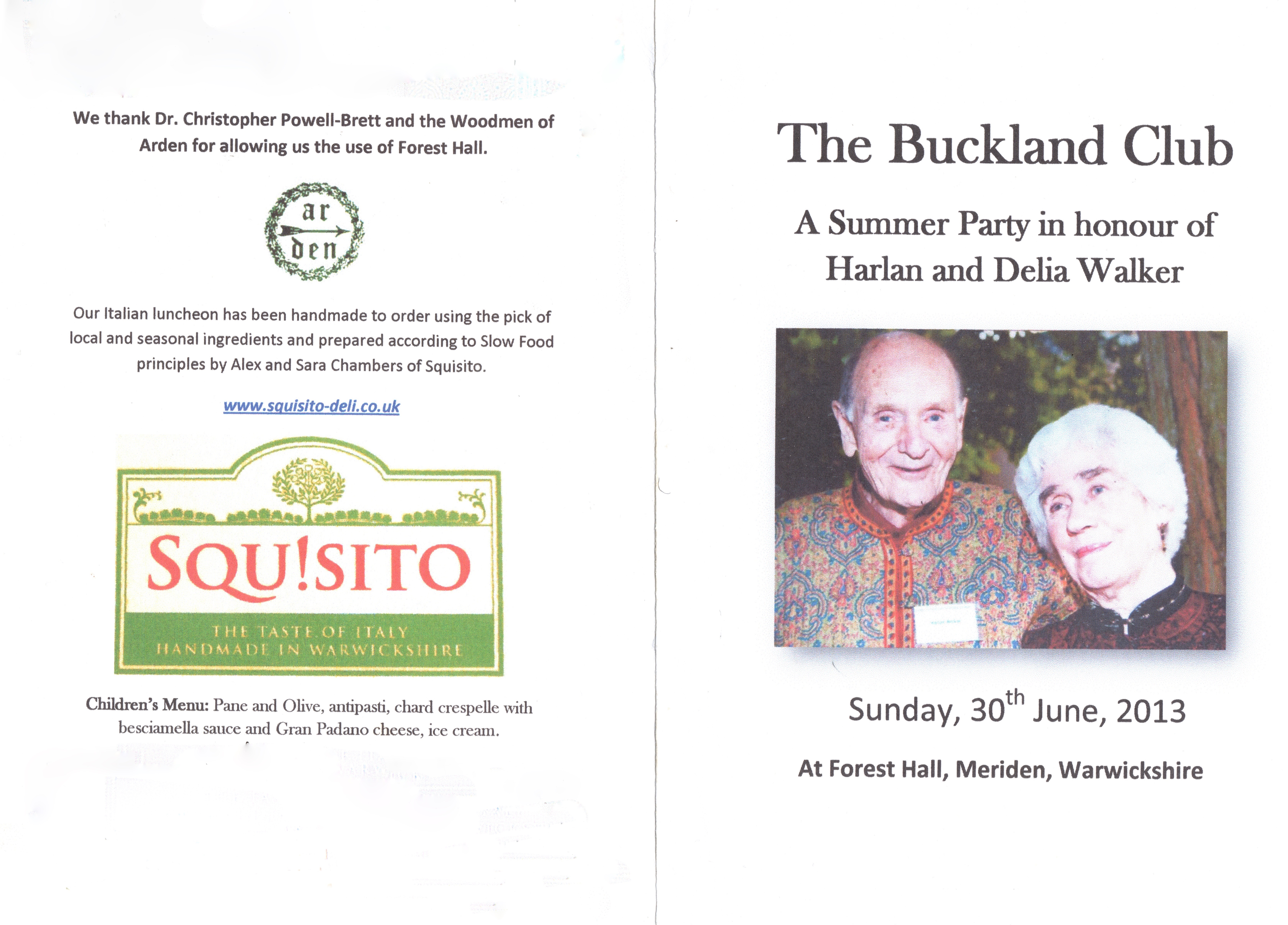 Minutes of a Summer Luncheon Party in Honour of Harlan and Delia Walker.

On Sunday 30th June 2013, the Buckland Club held a luncheon party at Forest Hall, Meriden, the headquarters of The Woodmen of Arden, England’s oldest archery society, in honour of Harlan and Delia Walker.

Somewhat unusually for the Club, on this occasion the sun shone. Forest Hall is a lovely place, an18th century pavilion and lodge, facing a magnificent lawn, redolent of the past and of the arcane practice of toxophily. We have had the pleasure of dining and picnlcking there on several occasions, some of which were alluded to in the slide show presentation given by the Chairman, tracing the Walkers’ progress through Summer Parties and Picnics dating back to 1977. 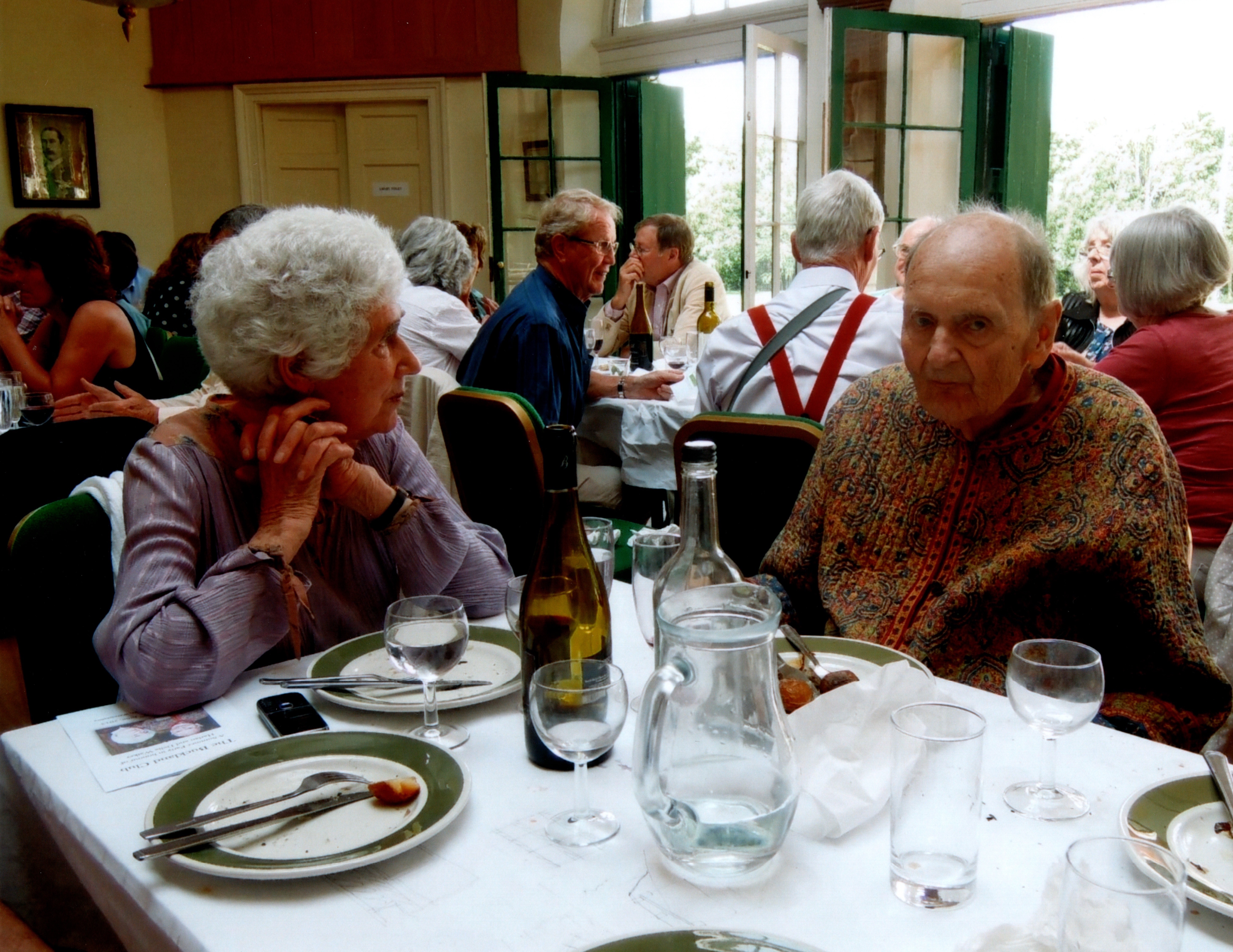 Our luncheon was to be Italian, prepared and served by Sara Chambers of Squisito who, with her husband Alex, had catered to previous Buckland parties. The Chairman went early to Forest Hall and found that all was said to be well; he returned to Edgbaston Golf Club whence a 48-seater coach would bring a good number of members and guests, including the Walker party, for the scheduled start time of 12.30. Unfortunately the entrance to Forest Hall is easily missed and our driver did so. Attempts to turn the coach in the narrow lane failed but eventually the VlP’s and other guests were delivered and ﬁnal preparations for the luncheon could proceed. For some unaccountable reason the large screen onto which the slide show was to have been projected, failed to materialise but banqueting paper and Blu-Tac were pressed into service and eventually glasses of Prosecco, or water for the young guests, could be passed round and a toast drunk to Harlan and Delia Walker.

The tables were laid with platters of antipasti, which followed a selection of Italian style bread and olives. Vegetarians present could avail themselves of the summer vegetable platter – chargrilled red and yellow peppers, yellow and green courgettes and tomatoes with buffalo mozzarella and basil. There was also a prosciutto platter with a selection of salami, prosciutto cotto and di Parma and mortadella. 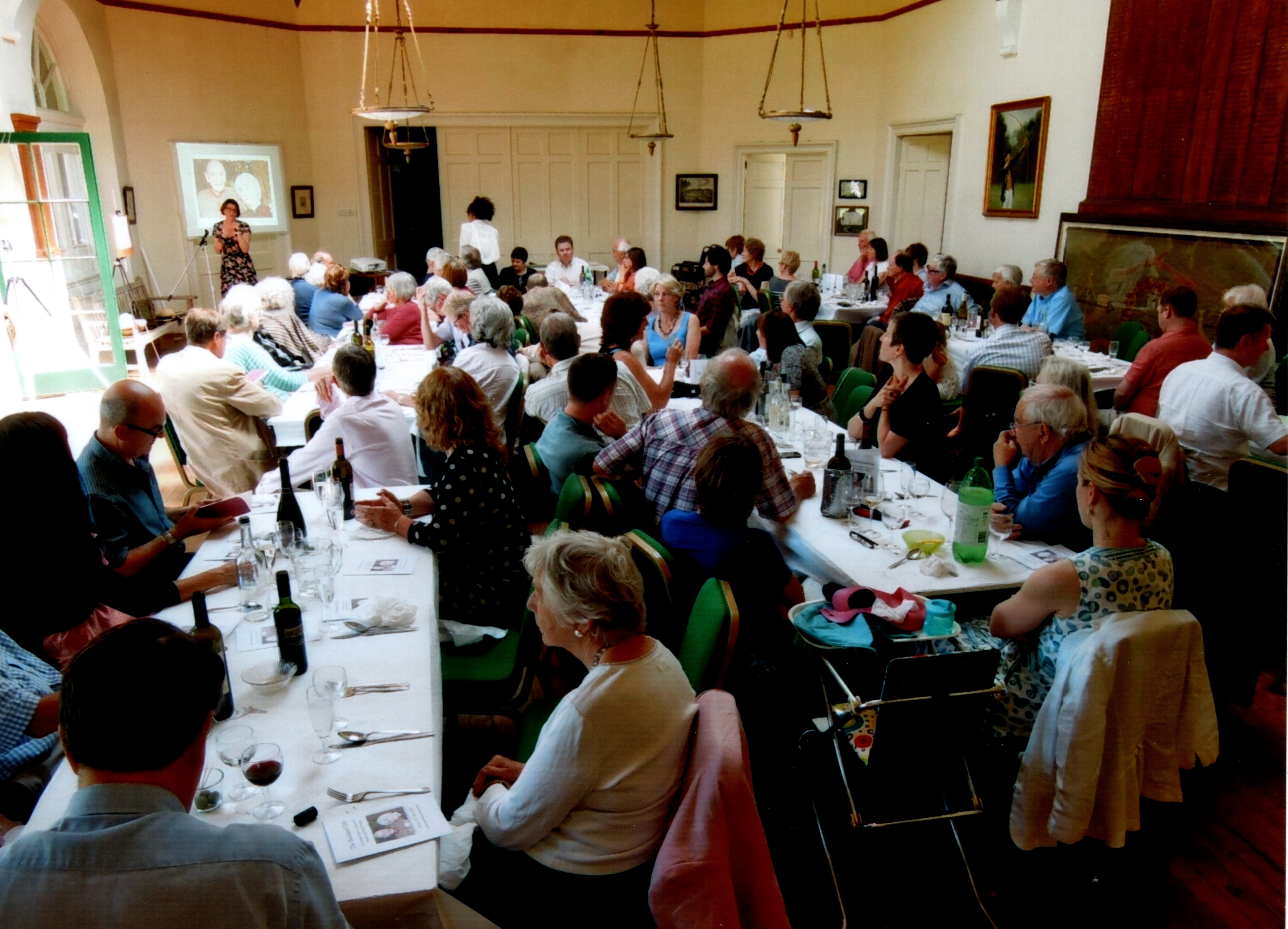 Members had been advised to bring their own wine (if required) and great was the variety thereof which soon appeared on the tables. The Club had made provision for the forgetful, inattentive or unusually thirsty and soon the modest stock of red and white ltalian wine from Connolly’s wine merchants was called into play. 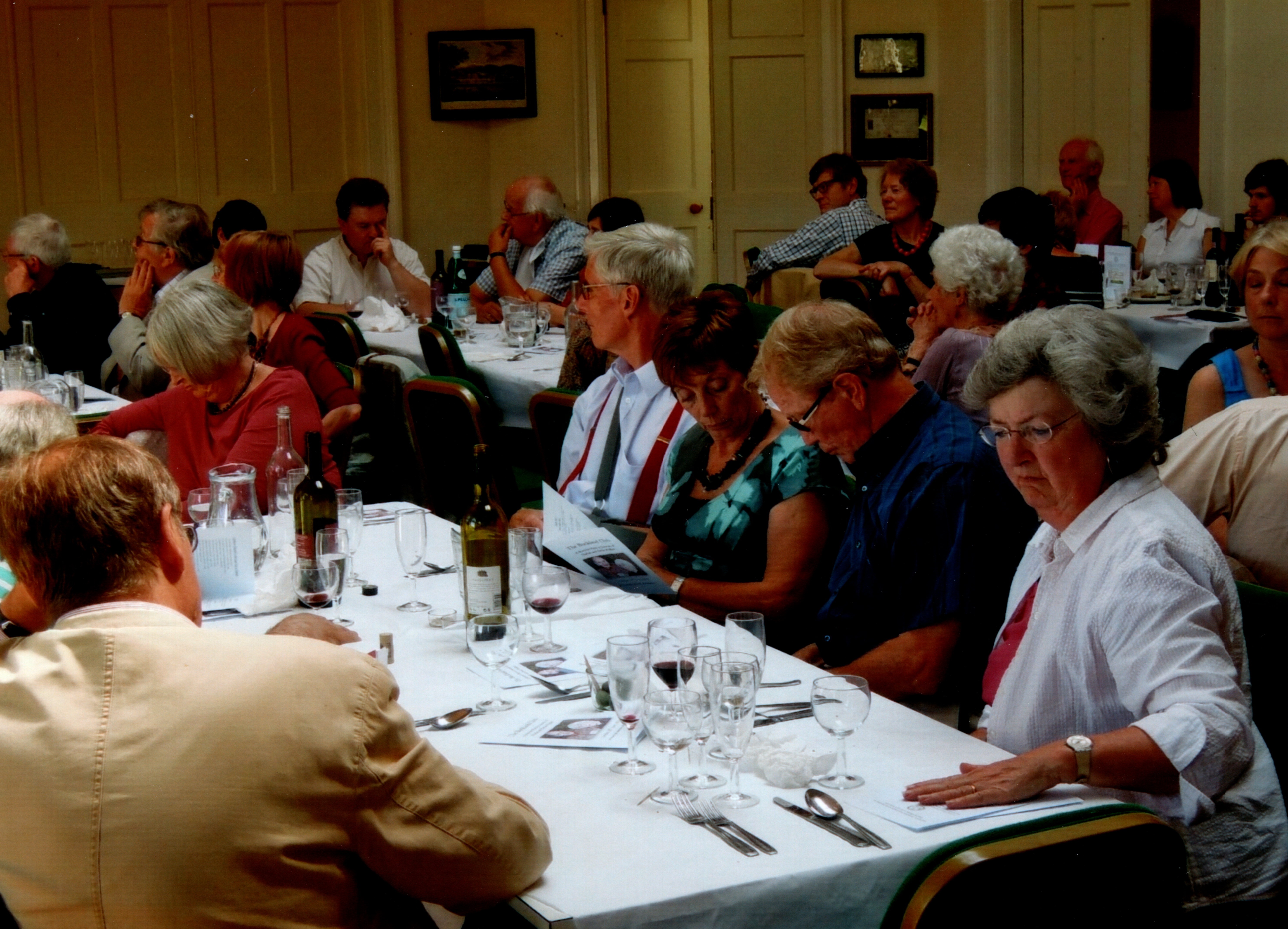 The slide show preceded the primi -a bowl of Iinguine al nero di seppie with sautéed squid, garlic and parsley: members and guests saw scenes from picnics past as well as of Oxford Symposiasts at play, several of whom were present, having come from Australia, Germany, France and the United States. Later, Michael Brewer delivered words of greeting, praise and appreciation for Harlan’s inspirational leadership of the Buckland Club over some 40 years, first as Secretary, then Chairman and now President.

Eventually the Iinguine were served and those present began to anticipate the secondi – an Abbacchio alla cacciatore or lamb stew – of rare breed Manx Loaghtan summer lamb, braised with white wine, smoked garlic, sage, rosemary and anchovy, all served with wood-fired summer vegetables and rosemary-roasted potatoes. 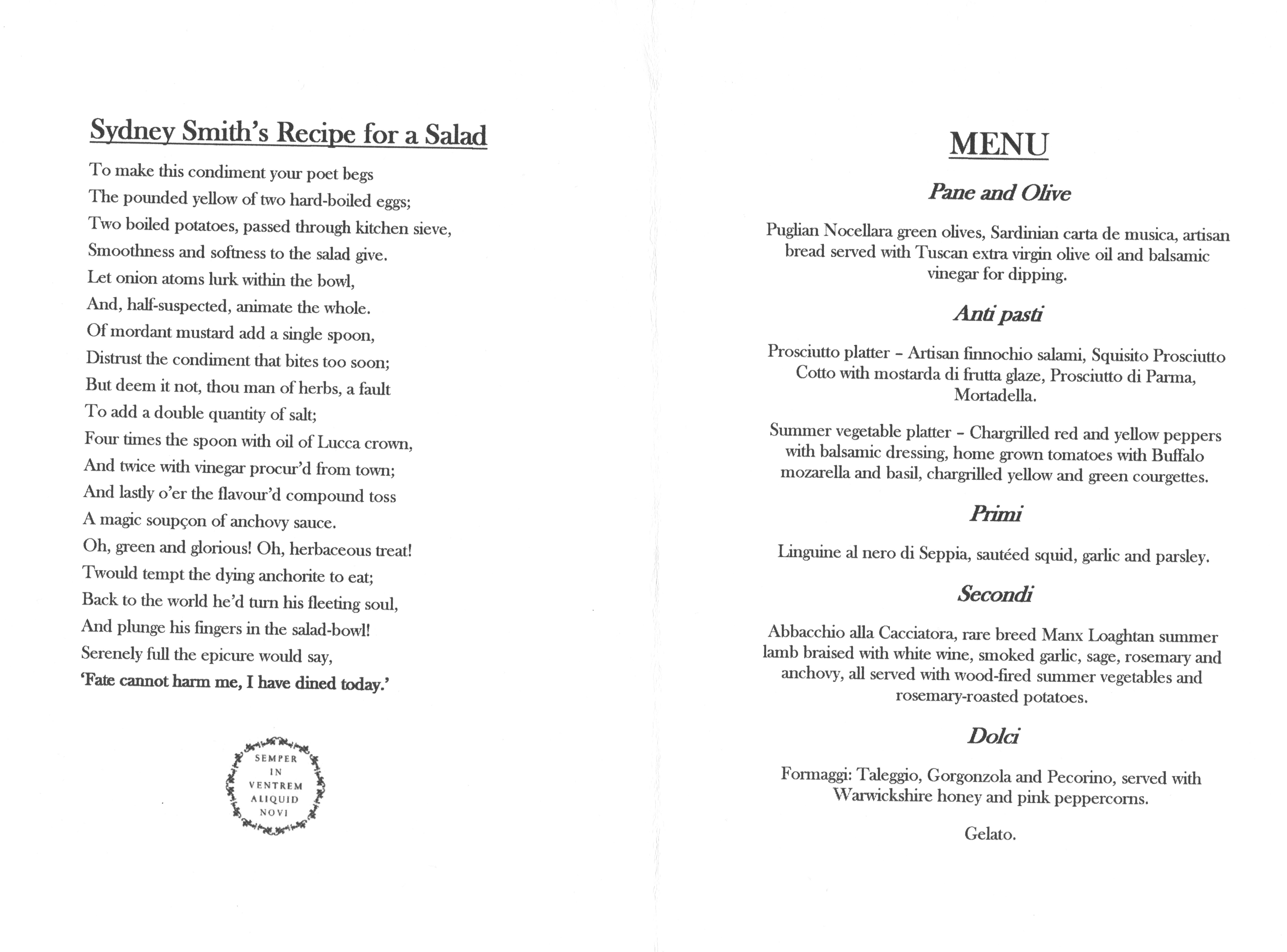 Alas! Somewhere in the evolutionary process, the Manx lamb appeared to have made the strategic mistake of developing ﬂesh difﬁcult to render appetising to man, thus, perhaps, accounting for its rarity.

Before the excellent cheese platter of Gorgonzola, Pecorino and Taleggio, served with Warwickshire honey and pink peppercorns, we heard a few words from a leading ﬁgure from the Oxford Symposium on Food and Cookery, Carolin Young. Harlan edited the papers of the Symposium for many years and through him has developed a certain synergy between the two organisations. Indeed, Harlan has successfully lured many Symposiasts into sponsoring Buckland dinners, among them Ursula Heinzelmann, Sharon Hudgins, Jill Norman, Gillian Riley, Bruce Kraig, Alicia Rios, Charles Perry, Andrew Dalby and the late Alan Davidson, co-founder of the Symposium 32 years ago.

Squisito had thoughtfully provided a children’s menu which included chard crespelle and their homemade gelato but as a result of some ambiguity in the menu card, it appeared there was not enough gelato to go round. This was but a minor disappointment and did not detract from the evident pleasure in the occasion taken by all present.

There were present 27 members and 58 guests, whose signatures were appended to a menu card which was later presented to Harlan and Delia Walker. 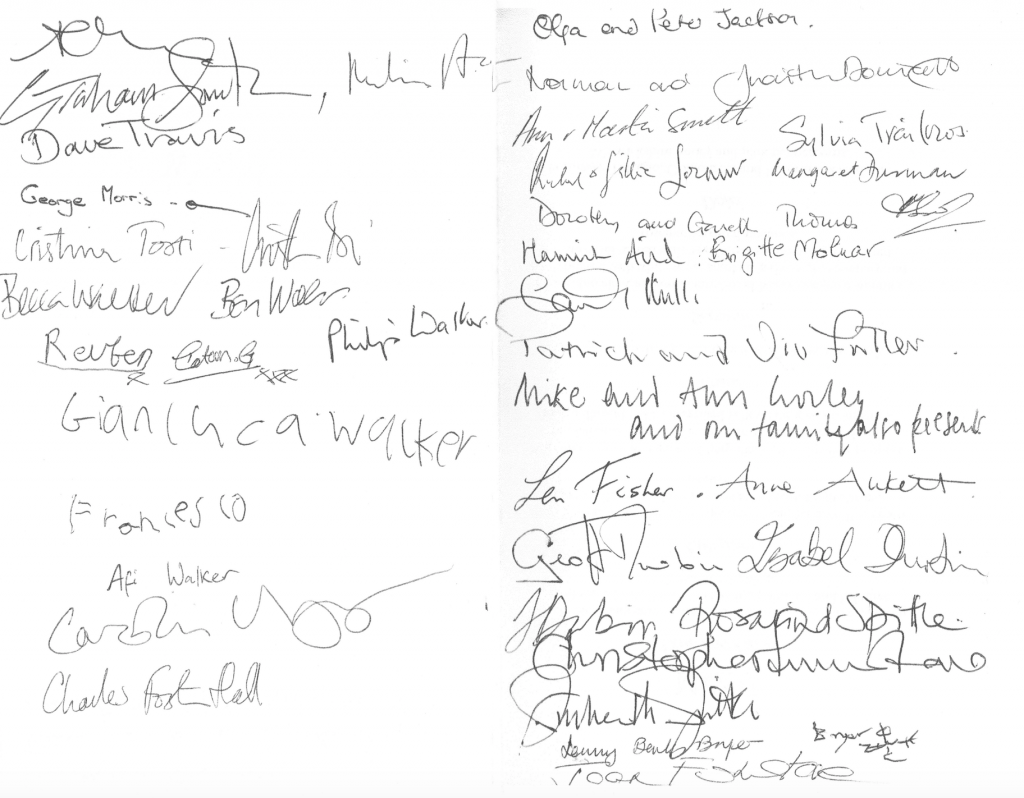 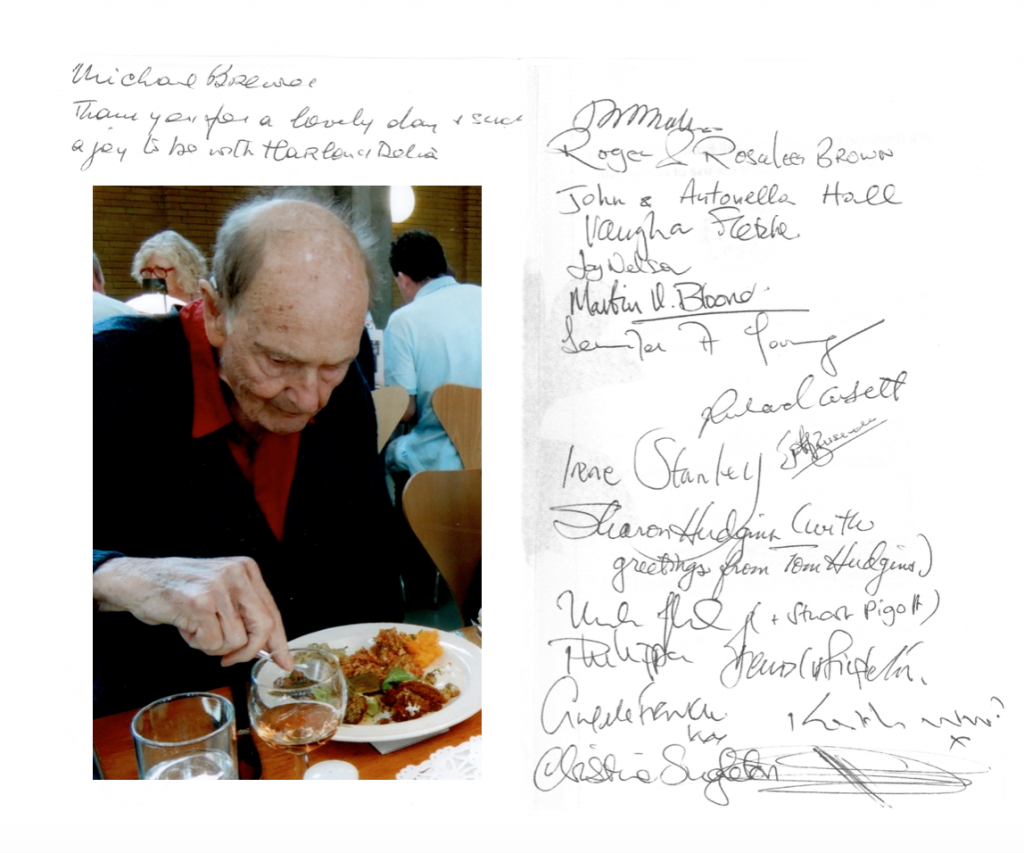