Minutes of a Peruvian Dinner

Having returned from a holiday in Peru, impressed by the cuisine, the Honorary Secretary brought his customary persuasive charm to the Committee with the suggestion that the Buckland should have a dinner based on the gastronomy of that land. This at least meant that when it came to the dinner itself he did not need a fulsome introduction as he was already well known to us.

There were present 76 members and guests, assembling at one of our favourite venues, The Edgbaston Golf Club, on the night of the 19th of March 2014, and a chilly evening it was in the words of Keats  “…bitter chill it was the owl for all his feathers was a-cold” . The invitation recommended that we should wear warm overclothing and a hat. Some of us either didn’t read the advice, like your Meetings Secretary, or forgot or ignored it and froze in the cold air. Your Chairman set some sort of an example by appearing in a poncho but failed to complete the picture by not having a chula under his sombrero. This advisory dress code was because the preprandials, the Comidas, were presented outdoors, on the terrace, cooked before our eyes a la calle and very well received they were. We had Ox Heart on Skewers, Octopus and Chorizo, served likewise, Cheese Tamales, Cassava and cheese Croquettes with Huaincaina Sauce and Chiffles (deep fried plantain) that tasted like banana fritters. The accompanying drink, the Bebidas, was a Pisco sour, not unlike a Margarita, but based on a fermented grape distillate rather than blue agave and insidiously alcoholic. Wonderful. A couple more of these and we would have been legless.

Fortunately sobriety won so we did make it to the table where we sat down to a first course of Cancha (shallow-fried corn) and a selection of salads – Coriander Potato Cake with Beetroot and Avocado. Potatoes with Spicy Uchucata Sauce, Fig and Fresh Cheese Salad and a Palm Heart Salad know locally as “Solterón”.  We were reminded by our sponsor that Peru gave the potato to the world. 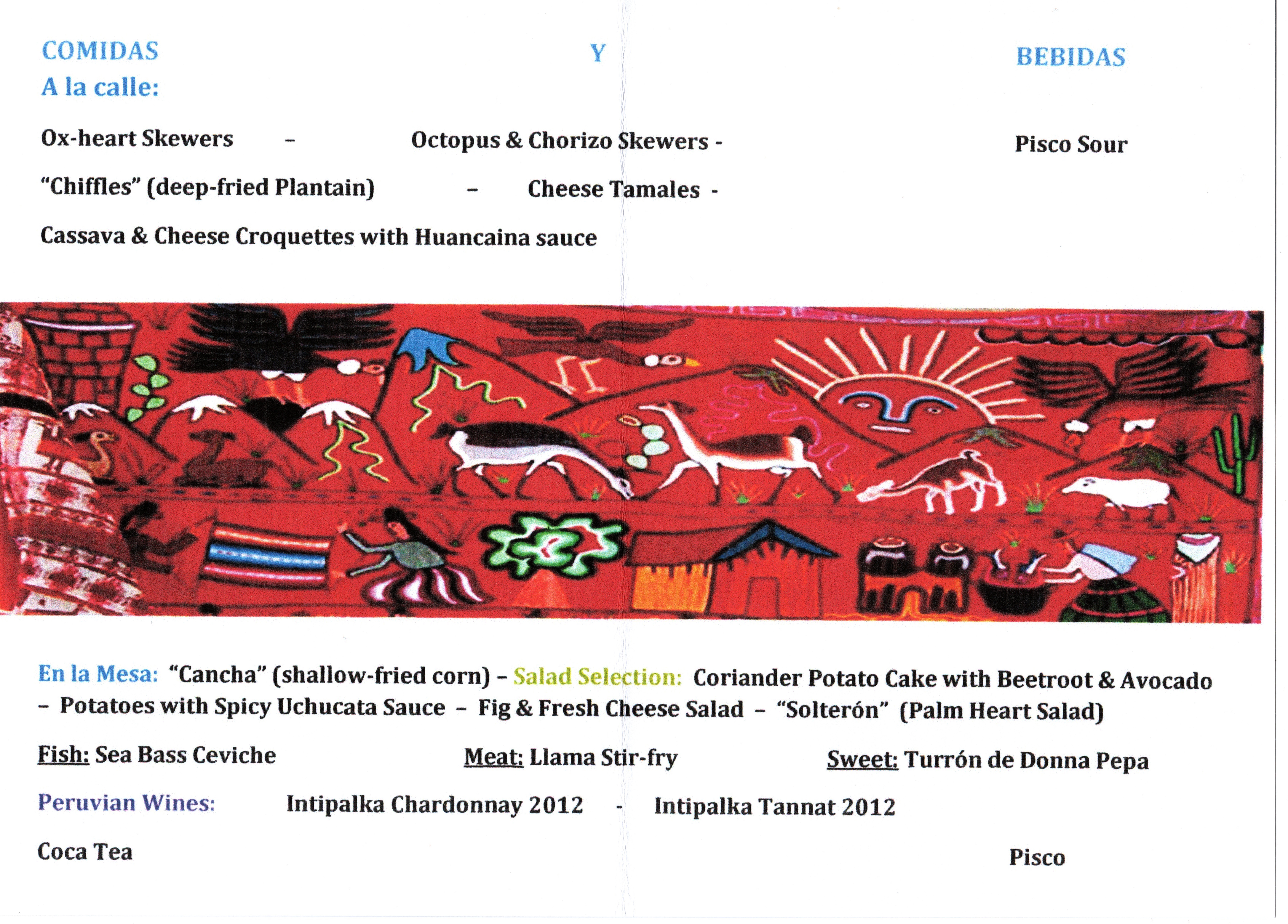 This was followed by a Sea Bass Ceviche, raw fish with a recipe introduced by the conquistadores but updated, so our sponsor informed us, by the local Japanese who have a significant presence in the country. It might be thought of as a South American Sushi. In giving us the background he suggested that we should salt the dish in order to open the pores in the meat. He didn’t warn us of other possibilities. Some of the medics among us would have been aware that there was risk of infection by such pathogens as Anisakis simplex, Diphyllobothrium spp., Pseudoterranova decipiens, and Vibrio parahaemolyticus. In this instance ignorance is bliss. Anisakis and Pseudoterranova are roundworms that can cause intestinal obstruction and perforation, Diphyllobothrium, the tapeworm, may produce anaemia and Vibriois the organism responsible for cholera.   Had this been widely known the dish might have been enjoyed less. As it was, the course met with general approval although there was some disappointment that we were not told until it was too late which of the delicious sauces placed before us was to go with which dish. 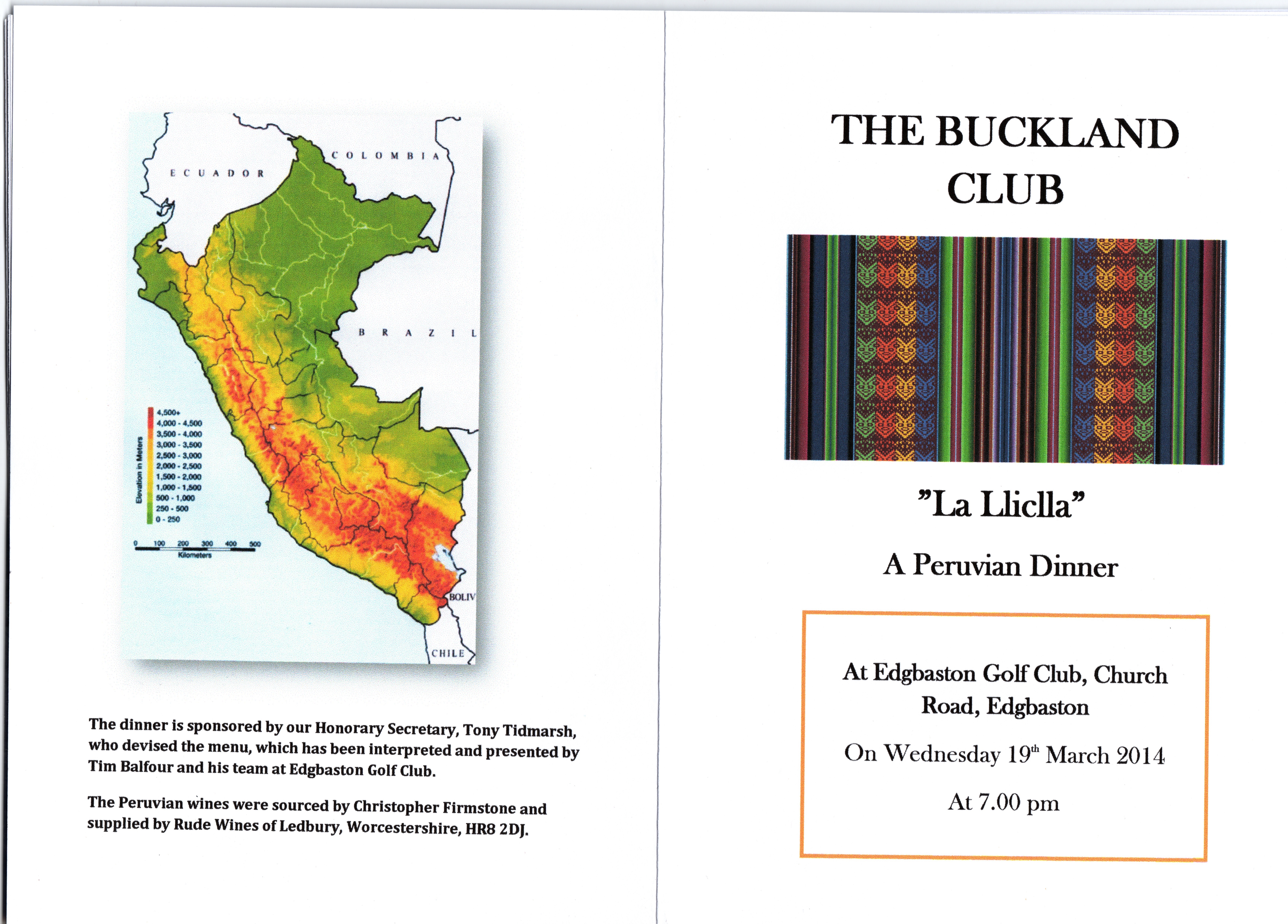 We were then treated to a description of the pictorial features of the menu, put together, as has become the recent custom, by our Chairman with, on this occasion, the assistance of our sponsor’s 8 year old grandson who designed and made the flag that adorned the end of the room. On the front there was a picture of the pattern of a Llicllla, a garment worn by Quecha women. Within there were primitive representations of Peruvian scenery, flora, fauna and artefacts and on the back was a map of the country.

The placemat was rather more photographic, with one of the images, possibly worrying,titled, “Meet our main course” and showing a llama at the side of two humans. It would have been of even greater concern had the figure been that of the Dalai Lama. We do try, as far as we can, to follow the habits of our inspiration, Frank Buckland, and we do know that he had a propensity for eating anything that came to hand including that of a Royal Heart, but times have changed, and with them we have to accommodate. As it was, we simply ate à la Pérou. It tasted like lamb, to which the early settlers considered it related, presumably on account of its coat. But sideways on it looks more like a camel of which it is of the same family. It was supposed to have been stir-fried. Perhaps it was, but the consistency was of string. Not wildly enjoyable. Moreover eating it required some adjustment of the cutlery as your Meetings Secretary found his knife on the left and fork on the right.

At this stage, Michael Brewer, a former member of the committee, proposed a toast to the memory of the recently deceased Clarissa Dickson-Wright who, he said, would eat anything. We responded enthusiastically.

The sweet – dessert is a better term – was Turrón de Doña Pepa, an anise and honey nougat, normally eaten in October at the Feast of Miracles, a feature, so our sponsor told us, typical of Latin American Catholicism, although he didn’t say why.

The dish might have been good but we couldn’t tell as it was too hard and dry to eat.

Although Coca Tea was on the menu none appeared on the table of your Meeting Secretary but we did have as a digestif, neat Pisco, which smelt like Tequila but tasted like Grappa.

Just before the final drink was served, the Chairman thanked the chef and staff of the Golf Club for preparing and serving the food, Christopher Firmstone for sourcing the wines, a 2012 Intipalka Chardonnay and an Intipalka Tannat, a grape which is becoming something of a South American specialty, both highly enjoyable, and then thanked the Sponsor. The latter did a good job, telling us of Peru and its food and amusing us in the process, as is his wont, but the Golf Club was not up to its usual consistently high standard. The food had started so well but the later courses and the service left something to be desired.