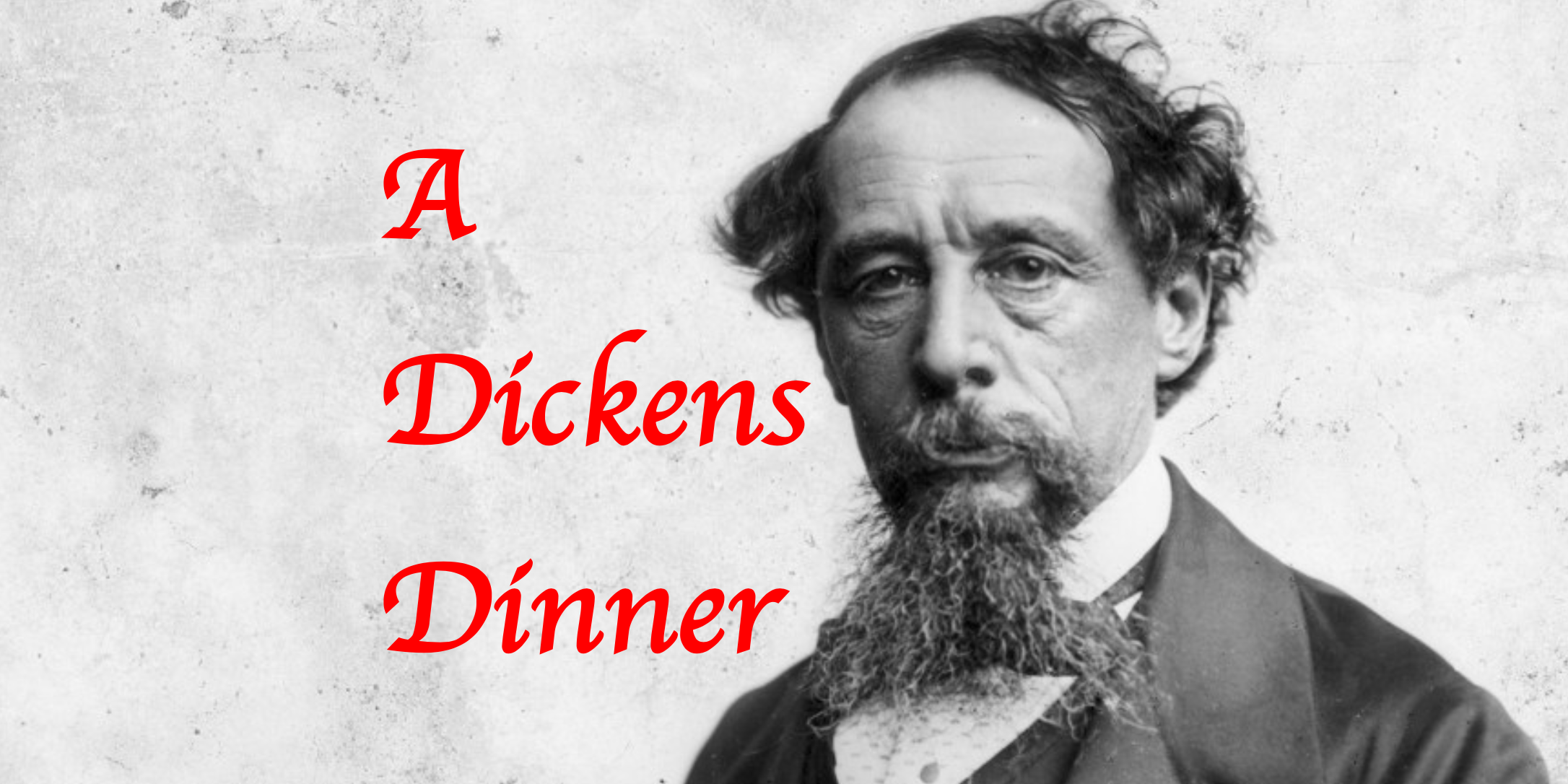 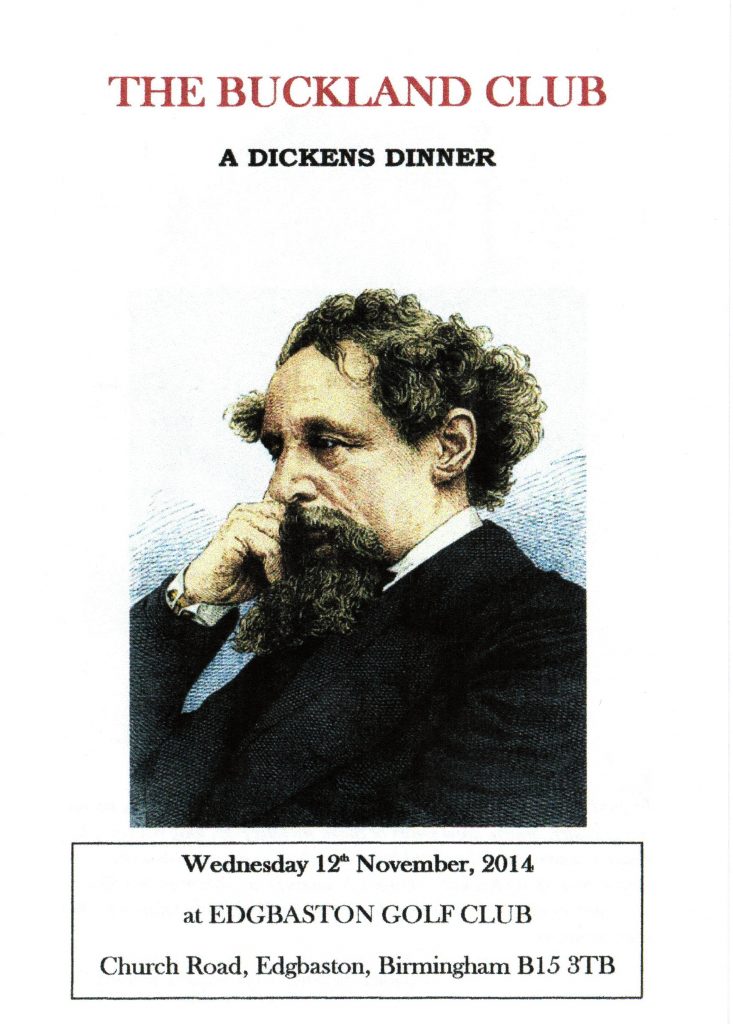 84 members and guests assembled – at the Edgbaston Golf Club – no Bleak House this – on the evening of Wednesday, 12 November. Dry it was, so we did not need our gamps. We arrived with Great Expectations for what promised to be a most entertaining and enjoyable evening to be spent with Our Mutual Friends. And so it was, as these minutes will record. Before we went into dinner we were treated to a succession of delicious canapés with recipes culled from the novels of Dickens, annotated by his grandson, Cedric Dickens, as later we were to be told by our sponsor, and from the menus published by his wife under a pseudonym, also as vouchsafed by the sponsor. We had anchovy toast, German sausage topped with young greens, cream cheese with Parmesan on mini-oatcakes and smoked haddock fishcakes. These were the accompaniments to Smoking Bishop, a delicious hotpunch, not to be confused with Stinking Bishop, a Gloucestershire cheese that lives up to its name. The drink was served in vessels that resembled Kilner jars with handles. Your naïf Meetings Secretary, when asking whether these were authentic , was told that they had formed part of the Pot scene, not that he understood what that meant. A recipe for the drink was printed on the back of the copies of Dickens’ 1870 Cellar List, set out with the menus. It advised heating the oven to 350 degrees. The hope is that nobody who attempted to reproduce the punch thought that the recommendation was in Celsius. Also served was a Solera sherry, more of which later in these minutes, and available as a non-alcoholic alternative, popular in Victorian times, was Elderflower Cordial.

We then repaired to dine. Some of us were lucky to get there. Not for the first time at the Golf Club have attendees behaved like sheep who have gone astray. At the Equine evening, some were nearly lost to a Prayer Meeting and before the Dickens Dinner, a number, including the Meetings Secretary, committed the sin of hanging their coats in the Members’ Locker Room, well named, as the punishment was two-fold, first to be locked in before dinner and then at the end of the evening only to be able to retrieve their coats when the Chairman used his Open Sesame card to unlock the door.

The dinner was presided over by Andrew Morris, vice chairman of the Buckland who assisted with the arrangements and introduced the sponsor, Hazell Riggall, a member of the Buckland Committee, who in turn introduced the meal by acknowledging the help she had received from a Polish student whom she had met on a Victorian cookery weekend researching Dickens and food. She also acknowledged Dickens’ wife and grandson as sources, literary rather than culinary. 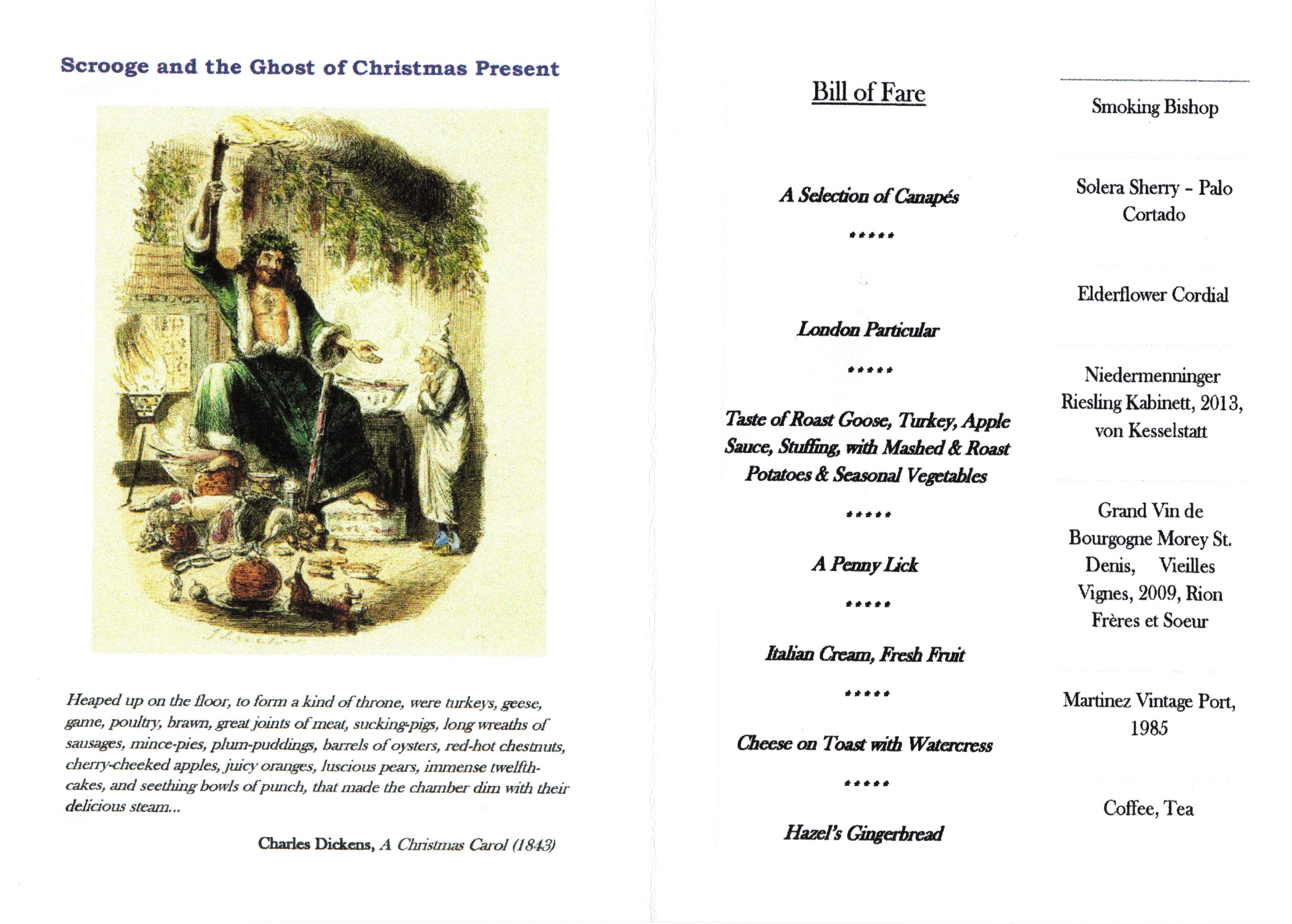 Her commentary on the food began with her telling us about the canapés, which, she said, in Victorian times were usually served at the end of the meal as a savoury. Some of the recipes came from Catherine Dickens’ book. Others, such as oatcakes and the smoked haddock fishcakes, are to be found in Dickens’ writings. What we were served did not follow the Dickensian experience strictly to the letter as his oatcakes came from Scotland following a visit there, whereas ours hailed from Staffordshire.

The first course of the meal, a delicious pea soup, was itemised as a London Particular, the appellation coming from Bleak House when Esther Summerson , observing the fog, is told that it was a London Particular, a veritable pea souper. The name of the fog followed that of the soup, rather than the other way round. The accompanying Bread Rolls were mentioned in a number of the novels.

The next course was based on the dinner, chronicled in A Christmas Carol as the Ghost of Christmas Present – Roast Goose, Turkey, Apple Sauce, Stuffing, with Mashed and Roast Potatoes and Seasonal Vegetables, with the vegetable selection taken from Catherine Dickens’ cookbook. The passage in the story concentrates on the goose. Had the Buckland gone down this route, what with the cost of goose, it would have ended up like the Cratchits, stony broke. 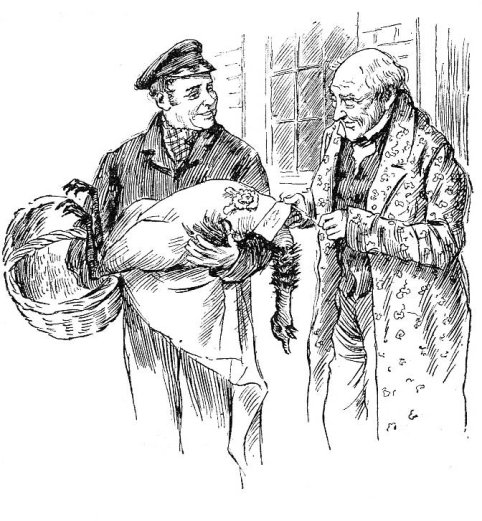 So the compromise was a taste of goose, but true to the novella, there was plenty of turkey as was provided by Scrooge in the true Christmas Present..

After this was a Penny Lick, a delicious orange water ice served to cleanse the palate. We learnt that there was no mention of ices in any of the novels, but many references in the domestic records. These ices were often made by Italian migrants who had arrived in this country during an immigration Golden Age long before it became a political issue. Servings were in thick-bottomed glasses made thus so that the portions would look larger than they were, and reused unwashed, perfect vehicles for the spread of disease. The Golden Age did not stretch to Health and Safety.

The evening then turned to an account of  Dickens’ early years, larded with references to other aspects of his life. These were presented by Lucinda Dickens Hawksley, great, great, great granddaughter of the great man and author of an illustrated guide to Dickens and his works. 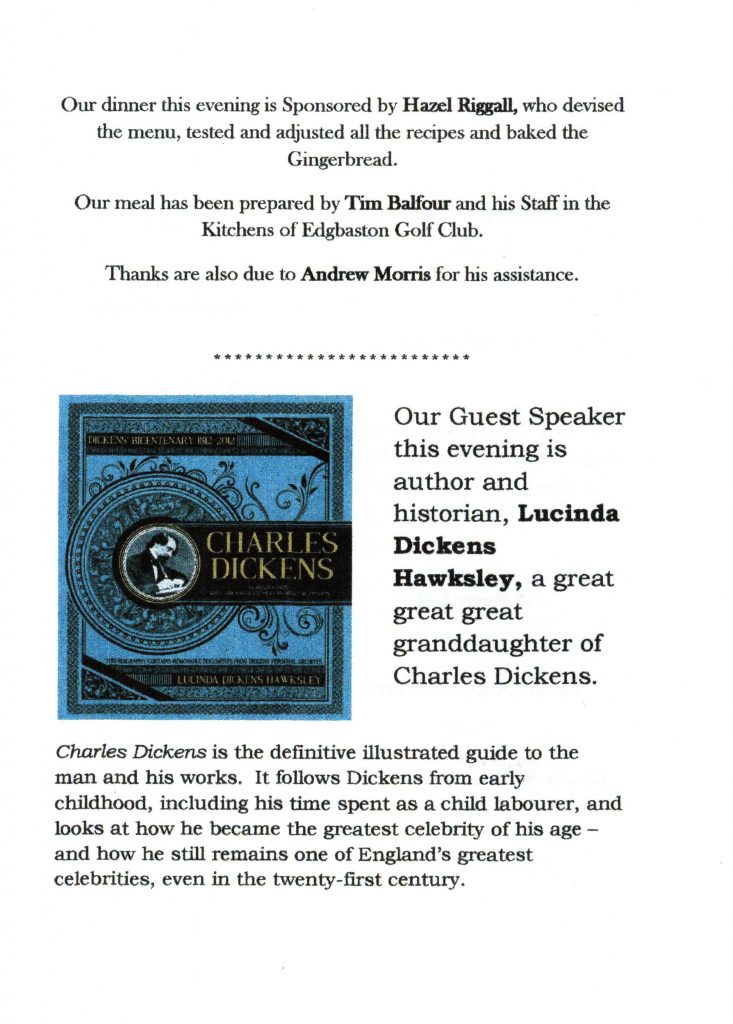 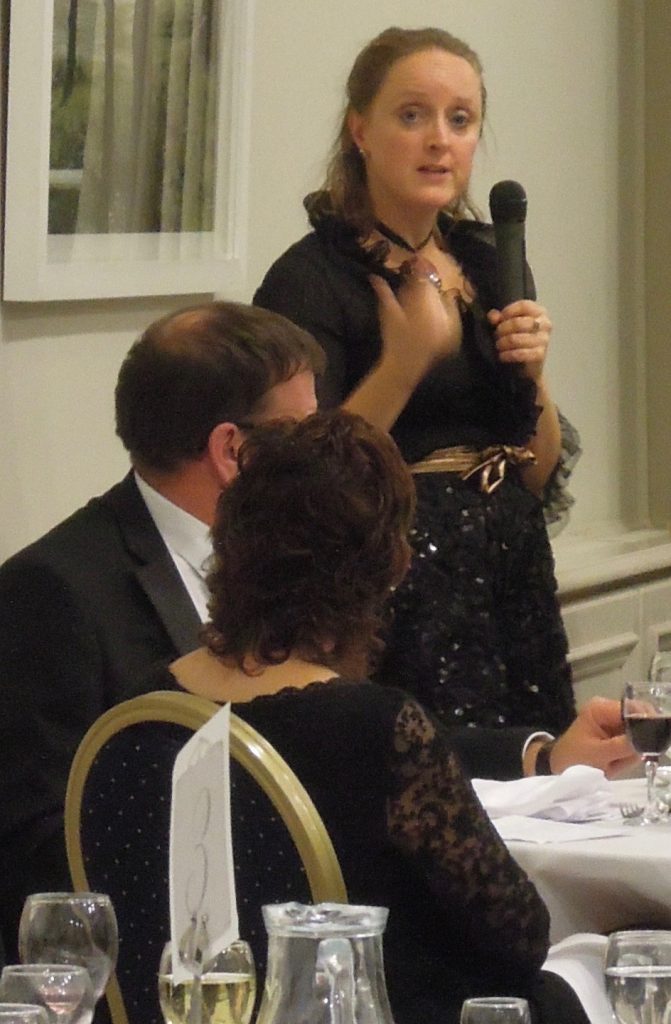 She reminded us that much of the material in his works was based on his own experiences, coming from a family living in deprivation and debt, leaving school at 11, being set to work in a hard and mindless job, but then, largely as an autodidact, he grew into the man he was. His powers of observation and recall as well as his understanding of human nature formed the basis of his success as a novelist. He became a celebrity with many public appearances, travelling widely in the British Isles, including to Birmingham on several occasions, and to the United States. His books remain popular throughout the world, particularly in the Far East and the United States and are even used as set texts in Croatia. Towards the end of her presentation she informed us that he recounted his early life only to his daughter and his friend John Forster. She said that he saw poverty, and then went on to speculate that he would have liked the Buckland. One hopes that her experience with us was not responsible for linking the two in her mind’s eye. Unfortunately she had to leave soon after: we would have liked longer to share her obviously moving and uplifting enthusiasm and pride in her ancestry. And why not? A very great man, a superb novelist, who showed that the pen could be mightier than the sword when it comes to social reform.

After her departure we returned to our more customary way of transacting business, namely food, wine and commentary.

Next was an Italian Cream and Fresh Fruit dessert, together with a version of a Charlotte Russe, adapted by our sponsor from a recipe from Catherine Dickens. The original was tried but found not to work. What we had was a cross between a soft cheese and a syllabub, and very successful it was. The last course was Cheese on Toast, a favourite with Dickens. This was usually taken by the men with port and cigars separated from the women who had retired to another room. Behaviour like that would not be stomached in the à la mode Buckland.

Finally tea and coffee were served with Hazel’s Gingerbread taken directly from Cedric Dickens. So popular was this that that the Secretary was asked to make the recipe available via the internet (see recipe section of the website).  Unfortunately a Health Warning over the Farenheit/Celsius question mentioned earlier was not appended. 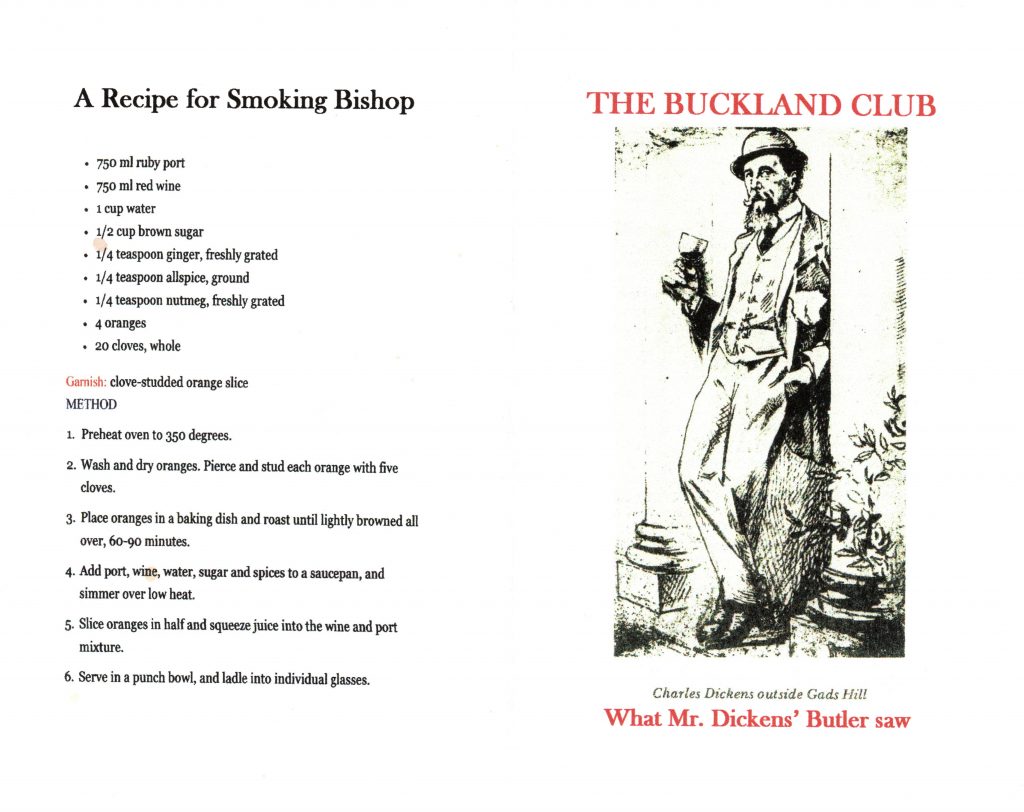 Before the evening came to a close, the Meetings Secretary was asked to say a few words about the wines consumed before and during the meal relative to Dickens’ wines as listed for auction following his death in 1870. The Solera sherry, a Lustau Palo Cortado, was used to draw attention to Dickens holdings, some of which were made by the Solera method, but others blended in this country as was usual at the time.

Our Hock was a dry Niedermenninger Riesling Kabinett,2013, von Kesselstatt. The wine it mirrored from the Dickens’ cellar was a Johannisberg “imported from the Methernich (sic) vineyards for Mr Dickens”. It is likely this would have been sweeter for that was the style then. The Riesling of the Johannisberg vineyard, a gift to Prince Metternich, was regarded as one of the finest, suggesting that Dickens was something of a connoisseur.

Besides the misspelling of Metternich  the list contains a number of  solecisms  – y Quen for d’Yquem, Bourjois for  Bourgeois etc, and the misclassification of  Ch. Margaux , Leoville and d’Yquem . 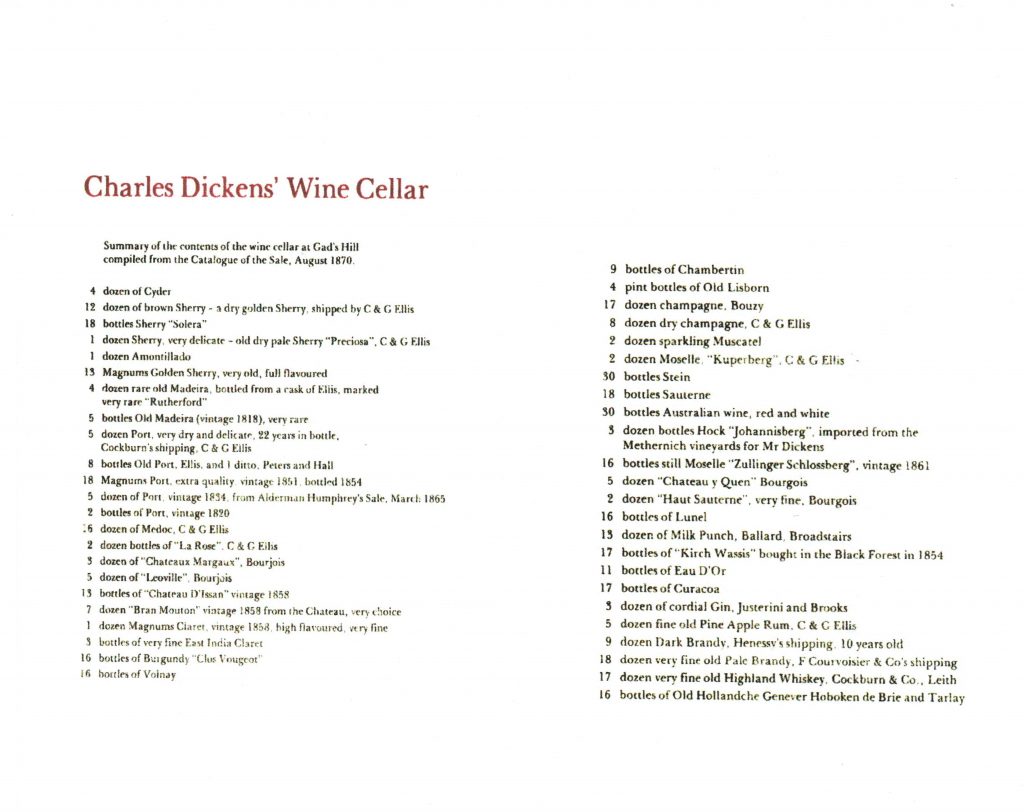 Given that we are not a bunch of Micawbers, we kept away from the Clos Vougeot, Volnay  and Chambertin in his posession, choosing instead a modest village Burgundy, a Grand Vin de Bourgogne Morey St. Denis, Vieilles Vignes, 2009, Rion Frères et Soeur – as Thurber might have said of it “a naïve domestic Burgundy without any breeding, but I think you’ll be amused by its presumption”.  Even that was something of an extravagance for our members, requiring a dip into the reserves to make it affordable.

The Port, subsidised by our Chairman and coming from his cellar, was a Vintage Martinez from1985. Dickens had a good supply of that wine 1820, 1834, 1851 in Magnum – most unusual – and Cockburn’s  “22 years in bottle” from C and G Ellis, a wine firm still trading, now as Ellis of Richmond. Dickens also had some Australian wine, anticipating the modern fashion, probably blended to allow it to survive its passage through the tropics.

At the end of it all the Vice-chairman, Andrew Morris, brought in the Kitchen Brigade, headed by Tim Balfour, to offer our thanks. The food was so good that many of us wished for an Oliver Twist moment, but with a rosier outcome. And the service was polished. He then thanked the sponsor Hazel Riggall for masterminding the evening, for selecting the meal to make it a true Dickens dinner and for trialling the menu. This was met with prolonged applause, well merited. The back office of Tony Tidmarsh, the Hon. Secretary and Andrew Spittle, the Treasurer also received warm acknowledgments for keeping the show on the road, again well deserved.

One can sum up the occasion by saying that we had the Dickens of a good time. No Hard Times, indeed, the Best of Times.