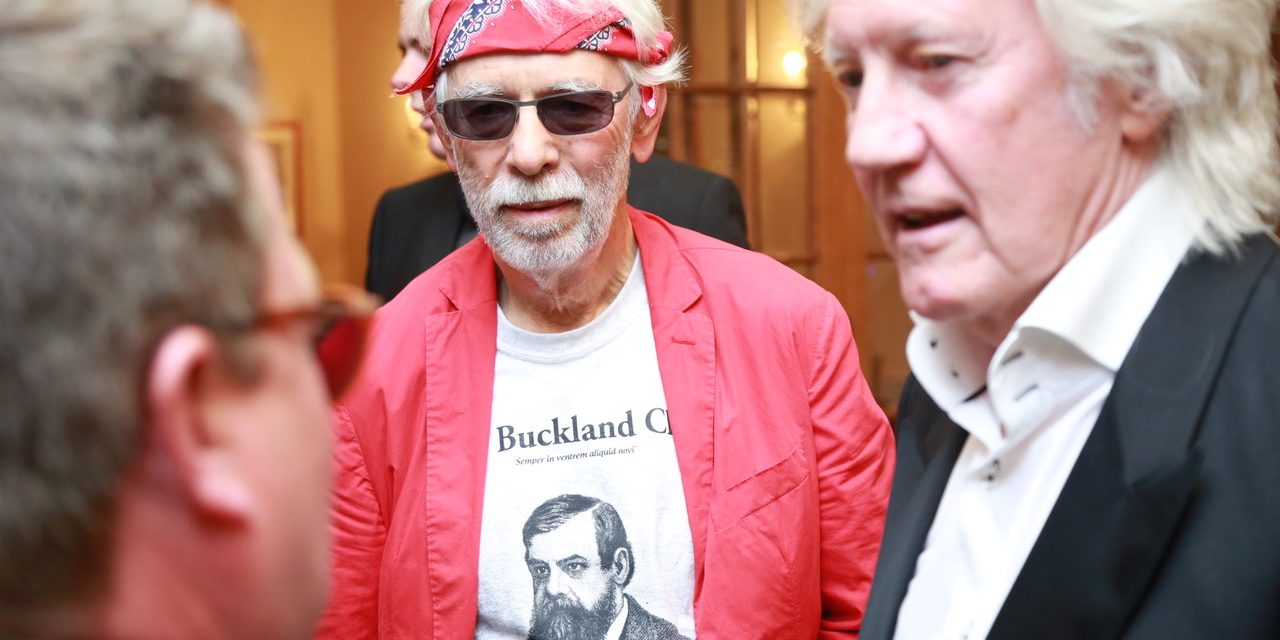 This was not the first occasion the Buckland has chosen a musical theme. The lives and music of Rossini and Beethoven formed the conceptual spines of earlier events.. Now, it was time for some Rock and Roll. As Chuck Berry, one of the pioneers, wrote, “Roll over Beethoven”, and we did just that, on the 22nd of October in the staid environment of the Edgbaston Golf Club. Many of us were looking forward to seeing how the venue and the ageing ears of many of the diners, of which there were 65, – numbers, not average age – could cope with ear splitting decibels. In this, some were disappointed, some reassured, for there was very little music.

The occasion, introduced by the Chairman, Andrew Morris, was hosted – as they say in the entertainment world – by Dave Travis, a man of many parts – gallery owner, promoter, and photographer. He began, in an acknowledgement of the locale of the dinner, by telling us that some rock musicians had a low golf handicap. He then introduced a number of Special Guests – all our guests are special – Phil Etheridge, Bill Hunt, Jon Watkins and Richard March all of whom play, or played, in bands, with some of the names being completely new to your Dinner Secretary and many of his generation, but familiar to others, giving recall to their wilder past. 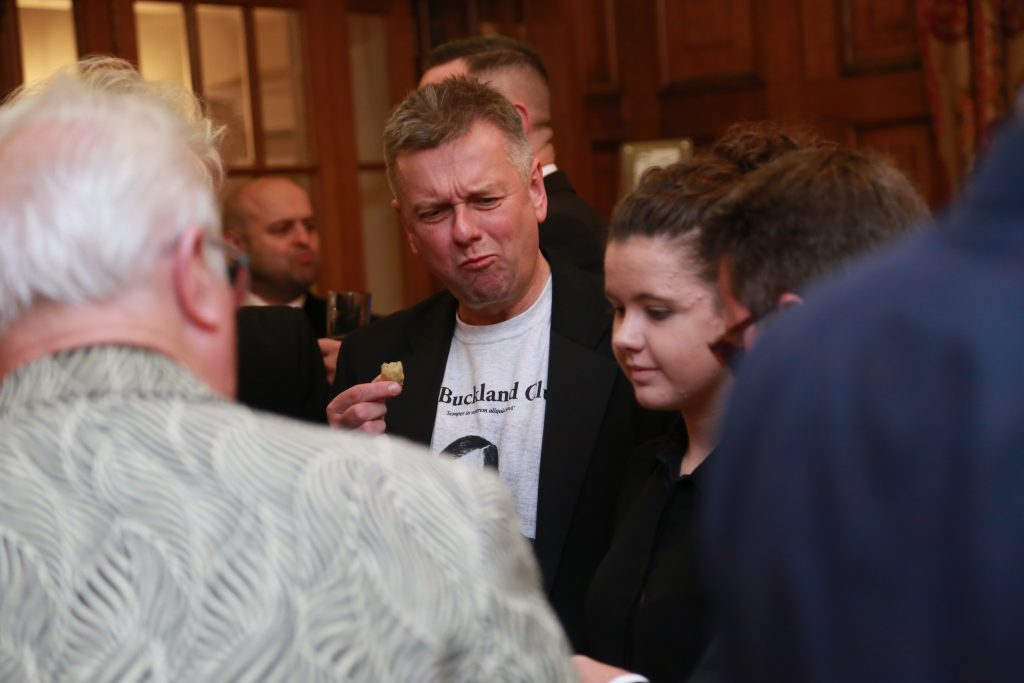 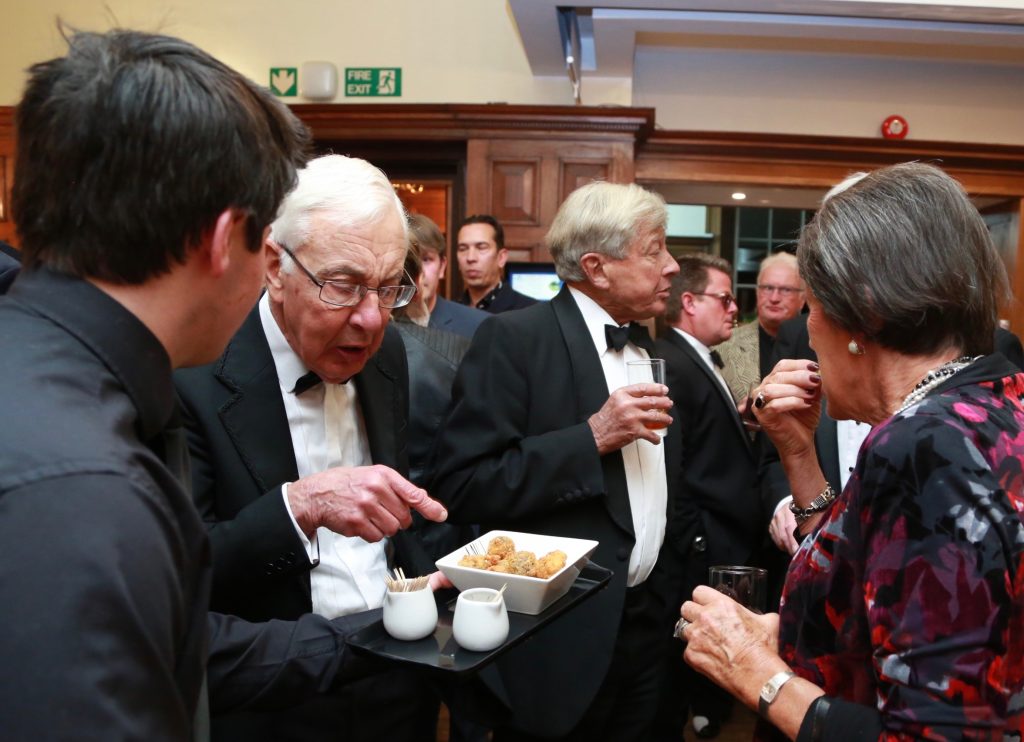 Our sponsor then moved on to tell us that the Fool’s Gold Loaf, a Squirrel and Hazelnut Bon Bon, we were served as a canapé– Beatrix Potter might have had something of the sort in mind when she titled one of her tales Squirrel Nutkin – was one of Elvis Presley’s favourite foods, so much so that he flew with some friends in his private jet to Denver to eat it on the complete aller-retour. The other canapé was deep fried gherkin with a sour cream and chive dip, also a favourite of the King – no confusion there – we have a Queen on the throne. These accompanied the Jack Daniels and Coke – Given the theme of the evening, one wondered whether this was to be liquid or powder. It was the former – and lemon drink served before the meal.

The first course was Soft Shell Crab with Salmon Sashmi with a roquette and bean shoot salad and a Wasabi dip. The Name of Rob Holliday , guitarist of The Prodigy, was mentioned in this connection since it was a dish frequently ordered as a rider before shows. We were at this stage told that the wines were chosen by Brian Travers, although he’d never tasted any of them. More of this later. His band was UB 40.

Please click on the link below for a message… not from our sponsor, but from Brian himself.

The main course was another favourite of the rock scene, although our sponsor did say that, despite his professional contacts, he had never eaten it before – wisely as it turned out, Chicken, Mushroom and Meringue pie, with creamy mash and seasonal vegetables, not a misprint for Chicken Marengo, supposedly concocted for Napoleon following the battle of that name. It tasted just as the one might imagine, excellent ingredients, beautifully prepared but spoilt by the combination, inappropriately sweet.

This was followed by cheeses all of which came from the Gloucestershire farm of Alec James, a member of Blur. Apparently it was only after he had purchased the property that the owner discovered that it came with 1000 sheep. The cheeses were named after his favourite tracks and excellent they were, the cheeses, that is. Indeed the one made from goat’s milk had been a prizewinner. Served with the cheeses were homemade biscuits and chutney. Not only is Blur the name of a band, it could also have been applied to the quality of the pictures, as projected onto the wall of the dining room, of the various musicians mentioned during the meal.

At this stage Tim Balfour, the chef, and his staff were brought in to receive the thanks of the assembled diners. They certainly deserved it. In true Buckland fashion the recipes came from well off the beaten track. The kitchen coped magnificently, producing dishes the likes of which they never before would have encountered, a challenge well met. As a tribute to the chef, a snippet of one of his favourite UB 40 tracks was played “Rat in Mi Kitchen”. Fortunately there were no Public Health Inspectors at the dinner.

After this came the coffee, accompanied by “hash” brownies, except that there was no “hash”, allegedly regretted by some. This was all in relation to the sponsor’s tale, narrating the origins of Lucy in the Sky with Diamonds. He recounted that a dentist whom the Beatles attended had spiked their coffee with LSD. As a further piece of background we heard that there was indeed a girl called Lucy whose parents were friends of the Lennons. This was woven round an assertion that the parents of Jeremy Paige, a new member of the Club, also knew the Lennons but their son never had a song named after him.

The presentation ended with a distribution of DVD’s compiled as a compendium of the pictures taken at the reception before the meal. Prior to the meal a photographer buzzed around – or rather snapped around – taking photos of all and sundry. It could have been a celebrity first night. Some of attendees entered into the spirit of the evening by attiring themselves in appropriate garb. Your Club Secretary could easily have been mistaken for one of the dramatis personae in the front row of the Sergeant Pepper sleeve had he sported a moustache and shed forty years. 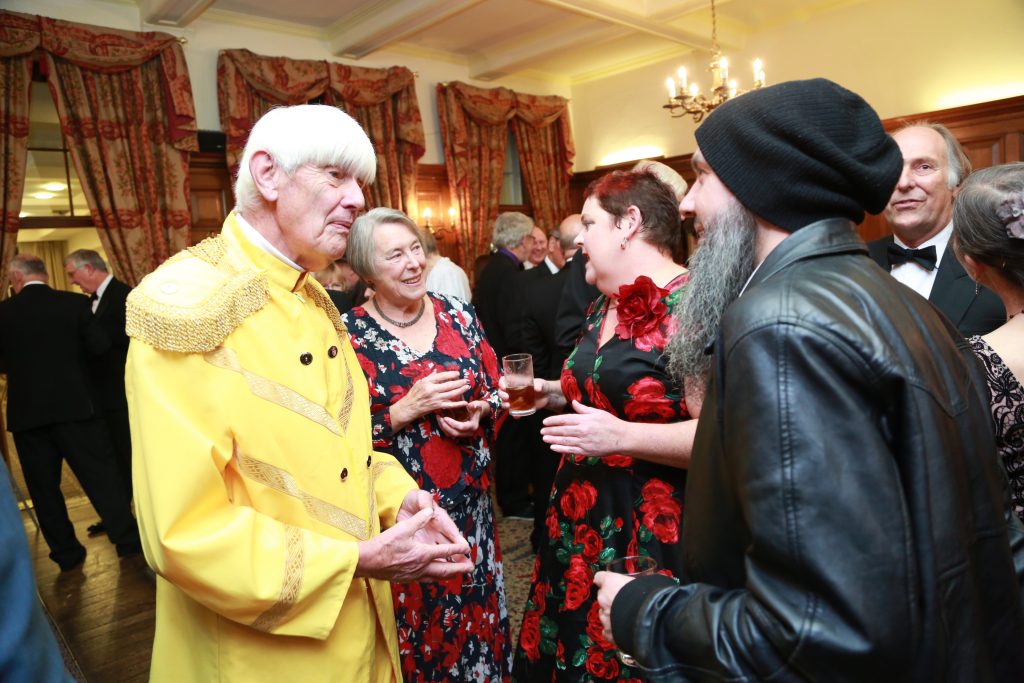 Others appeared as a mélange of Elton John, Elvis and Mick Jagger. Any one wearing dark glasses, or “Shades” as they were better known – an essential component of the uniform – had to remove them at the table as much of the evening was spent in the gloom to allow the projection facilities to have any chance of success. And then there was the occasional mini-skirt. The majority, however, could not tear themselves away from the thought that the Buckland was a highly respectable organisation, and dressed accordingly.

As ever, the menu card was imaginatively designed, this time in the form of a Compact Disc cover. The idea behind this, complementing a commentary full of amusing asides and delivered with panache, became clear when the DVD was distributed for insertion in the card. Each course was given the name of a band with the title of one of its tracks. A portrait of our eponymous hero was featured on the front cover announcing that within were his greatest hits. The inside displayed the menu and the drinks, the aforementioned Jack Daniels and Coke to greet us, a Sicilian Carratto, Ciello Bianco 2014 with the Crab, a Gamay de Bouze, Cépages Oubliées 2014 with the Chicken, Beavertown Brewery Beer with the Cheese and ending up with an Apricot Brandy. The back cover contained the credits with a generous offer to finish “All Rights unreserved, you can have them”. To complete the picture, tea shirts commemorating the 2015 Buckland World Tour were being given away to all who had come. The evening ended with the Chairman, Andrew Morris, thanking the Sponsor for taking us with him on his journey – in the context, a less ambiguous word than “trip” – down a musical memory lane – perhaps more Cresta Run than lane. But with it all, there were many in the assembled company who would have echoed the words of Maurice Chevalier in Gigi, “Ah Yes, I remember it well”.

See a video presentation of the dinner below, with David London reading the minutes. 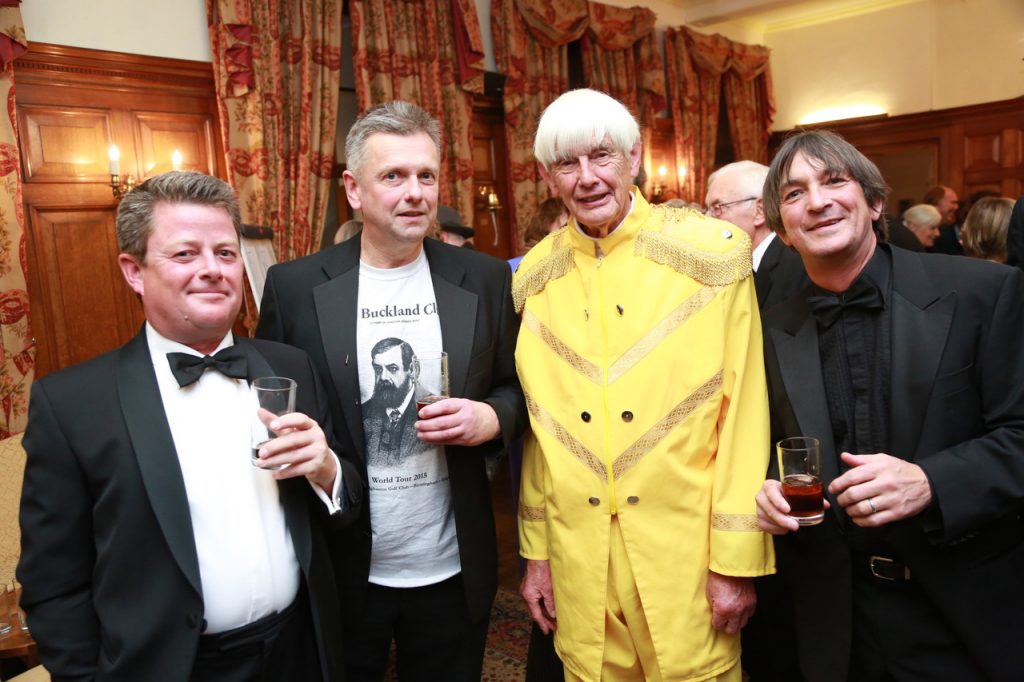 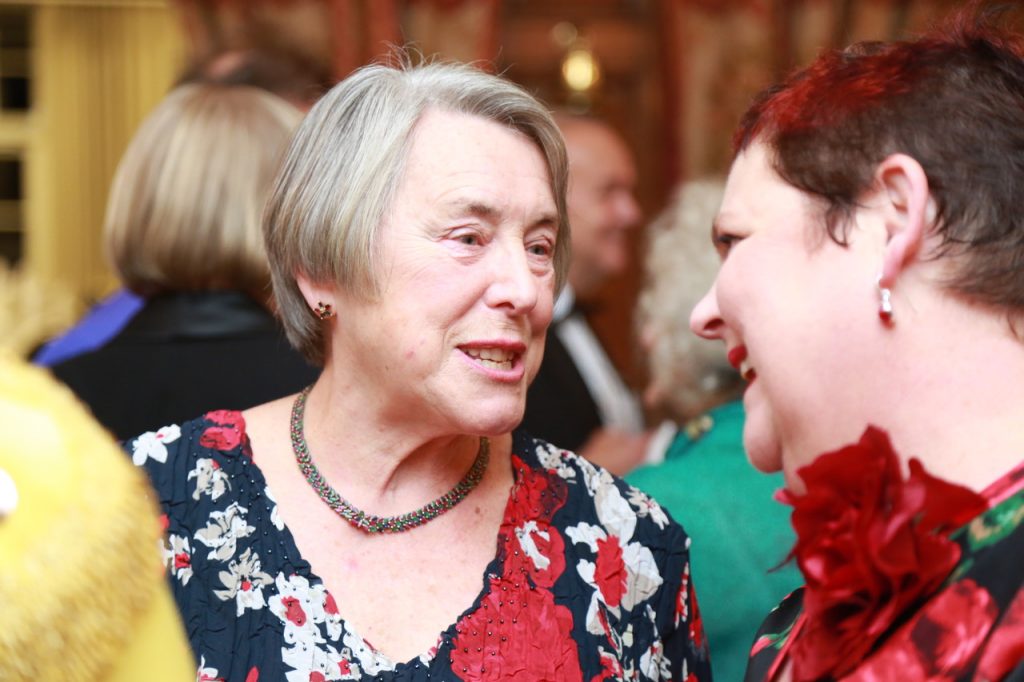 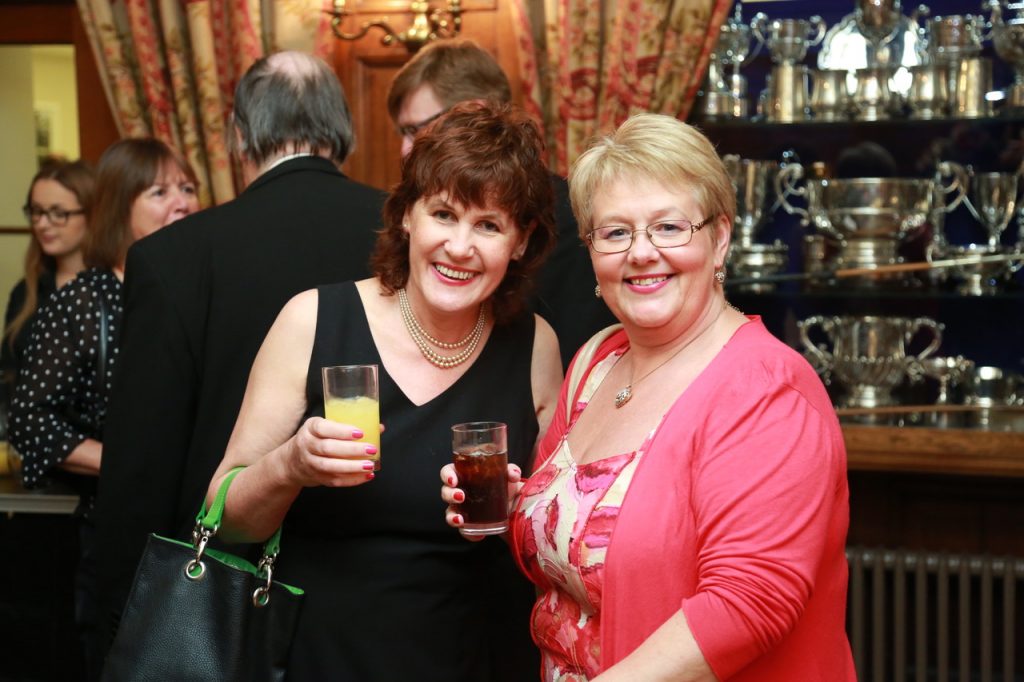 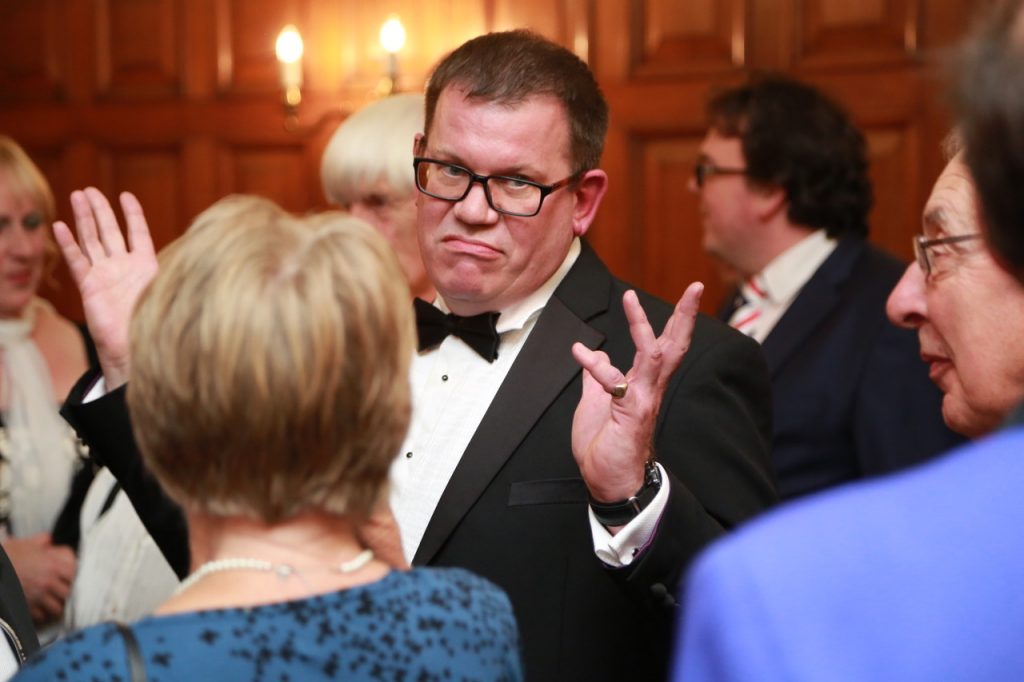 Below is the flyer for the dinner. 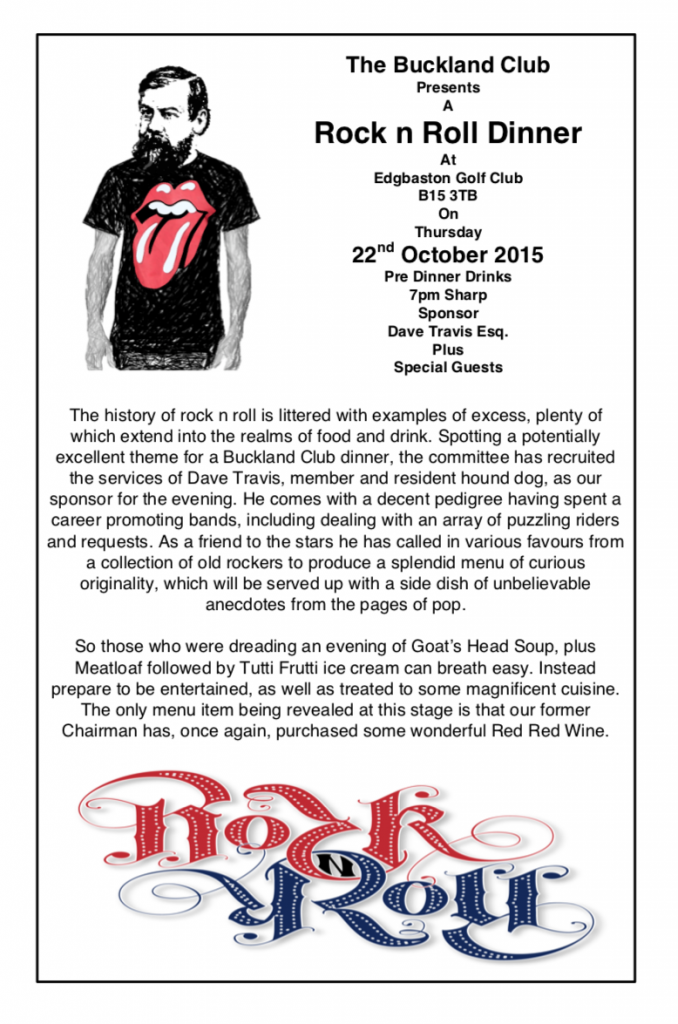 Menu Card in the form of a CD 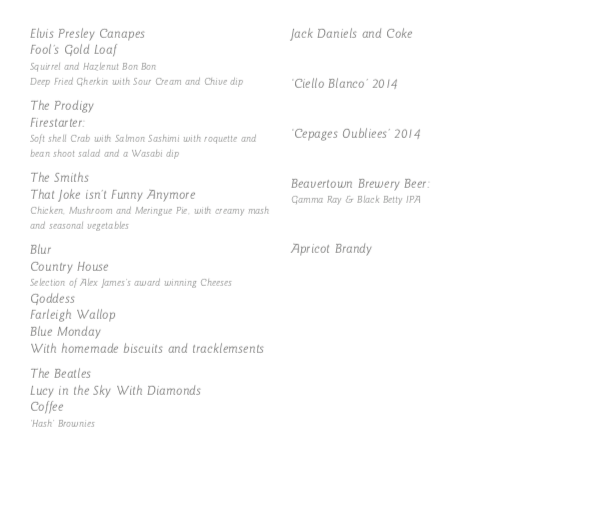 In true Rock n Roll style members were given a tour t-shirt. 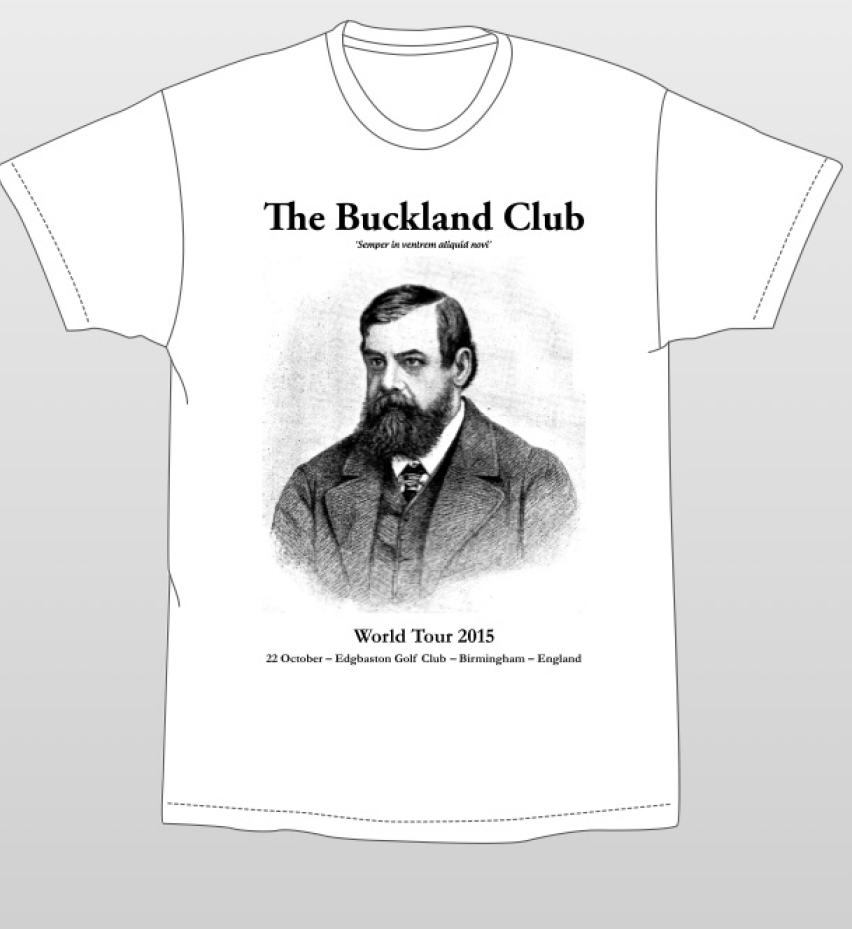