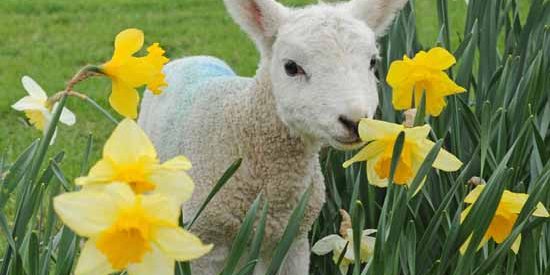 The notice of the Meeting of the Buckland Club for A Spring Lamb Dinner, at Edgbaston Hall, on Thursday, 7th April 2016, requested prompt attendance at 6.45pm.

We were told that there was to be a demonstration of butchery prior to the meal, which would necessitate an earlier-than-usual start to proceedings. However, it soon became apparent that there was a rival attraction, particularly for those (several) Buckland members who were also members of Edgbaston Golf Club: a valuable prize draw was scheduled for 7.00pm exactly, at which time only those golf club members present in the room would be eligible to claim the jackpot.  In the event, the person whose name was drawn from the hat was not present, but we had had more time than usual to enjoy a pale pink sparkling wine from New Zealand, Lindauer,  Special Reserve, Brut Cuvée, N.V. bottle fermented Pinot Noir. It was delicious.

The absence of the traditional accompanying ‘nibbles’ was remarked on: perhaps we were being softened up in anticipation of the demonstration to come?

At 7.20 prompt, the Chairman, Andrew Morris, resplendent in dinner jacket and whiskers, announced that Mr. Jason Hyde, a master butcher and colleague of our Sponsor, Roger Brown, Butcher of Harborne, was ready to begin a tutored dissection of a spring lamb carcass.

Members and guests took their seats at table, to which the long-awaited canapés were then brought, in order perhaps to provide, for those of a sensitive disposition, a distraction from the demonstration of knife skills; more likely to ensure that everyone received their fair share of the array of canapés, of which there were four: Lamb and Mint Sausage, Brains on Toast, Sweetbreads on Toast and Throat Sweetbreads poached in wine, on a Biscuit.

Roger Brown led us through the demonstration which was being projected onto a large screen, so that all who wished to follow the proceedings in close detail were able to do so. Those who did not could look away. 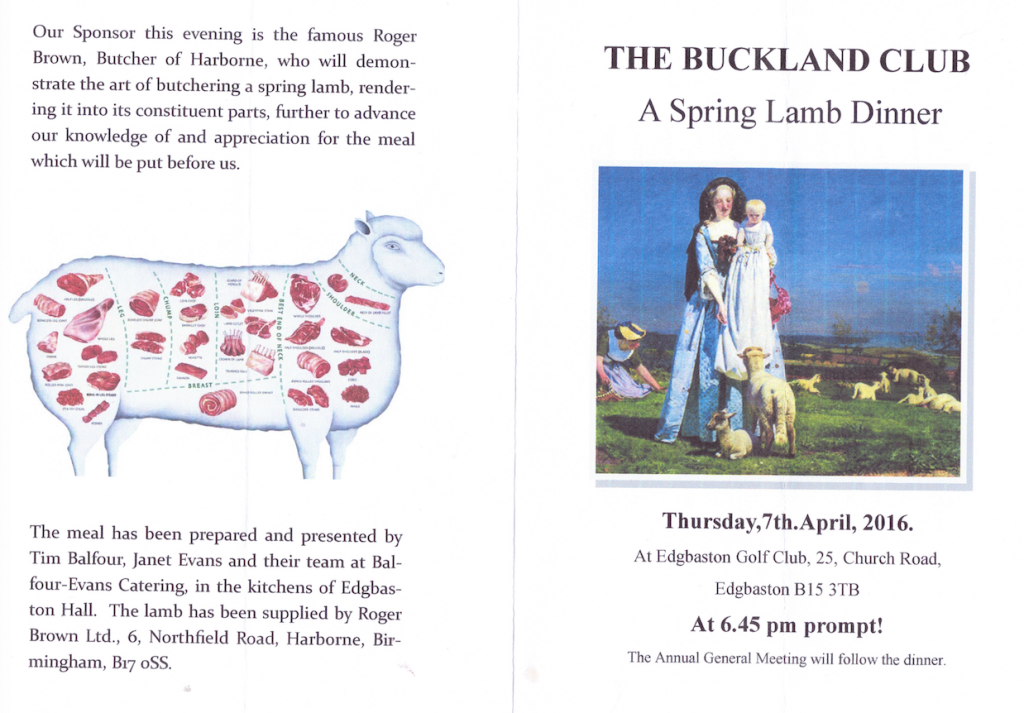 Firstly he told us that the description of one of the canapés on the menu card was not entirely accurate: the thymus gland, otherwise known as ‘Throat Sweetbreads”, would on this occasion have to stand in for the other named Sweetbreads, since the testicles of a 3-4 month-old lamb were so vanishingly small that the provision of sufficient to feed our numbers had proved impractical.  We put aside our disappointment and fell upon the Sweetbreads with relish. 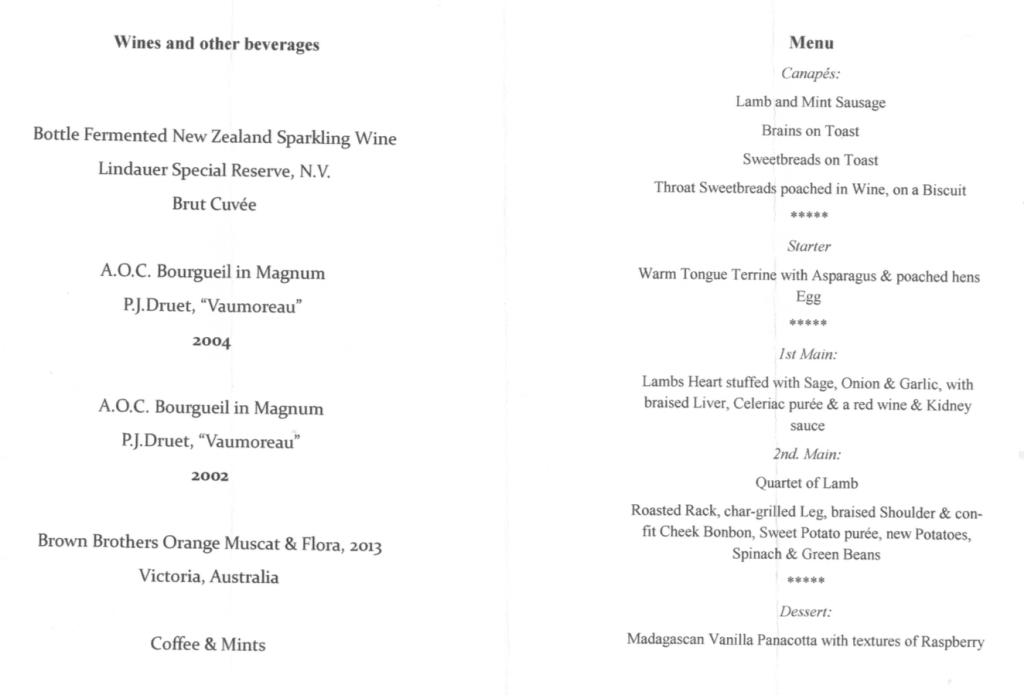 We were then introduced to our Sponsor’s guest, Mr. Nick Poxon, thanks to whom we were privileged, in the very best Buckland tradition, to be dining off certain parts of the lamb normally unavailable to the general public,videthe brains.  Since the BSE epidemic, associated with scrapie in sheep, brains could only be procured from very young animals and then under strict and carefully monitored health and hygiene regulations.  Ours were creamy and delicately flavoured, as were the Sweetbreads various, providing an interesting variety of textures.  We were left to imagine how the absent organs might have tasted.  Your minute-taker was put in mind of a small Haggis by what turned out to be the Lamb and Mint Sausage. It was very fine.

We continued with the sparkling wine – appropriately from a sheep-rearing country – whilst Jason Hyde expertly and rapidly performed surgery on the carcass, with running commentary from our Sponsor.

Fist cut: the Hip bone steak. Roger drew our attention to the colour of the muscle; light, denoting perfect condition; “sweet and creamy to the touch”.

Secondly, from the Hip was removed the Shank, a seemingly effortless stroke of the knife in the hands of an expert.  Those who struggle to joint a chicken leg would have appreciated his surgeon’s talent.

Third cut: the Breast, de-boned, rolled and tied ready for roasting. We were treated to a conjuring trick too: it was nigh on impossible to see how the Breast, and subsequently other cuts of meat, came suddenly to be rolled and tied with string, even under the close-up gaze of the film camera, itself expertly wielded by our Chairman’s guest, Mr. Jeremy Nicklin.

Fourth cut: the Kidneys, with an accompanying anatomy lesson.  We marvelled at the great lump of fat surrounding them, of which more later. Our Kidneys were used to make the sauce accompanying the 1st.Main course: Lamb’s Heart stuffed with Sage  Onion and Garlic, with braised Liver, Celeriac Purée and a red wine and Kidney Sauce.

Fifth cut: the Neck. Our Sponsor told us that he leaves the neck fillet on the Shoulder which lends it extra flavour.

Sixth cut: the Shoulder. On our lamb, 3-4 months old, the Shoulder would be sufficient for 4 or 5.  There are two sides to the Shoulder joint – the Blade and the Knuckle.  Your minute-taker was momentarily distracted by the revelation of “a complete channel of cod-fat” which appeared, stripped out of this part of the carcass, and failed to grasp the difference.  There were other large lumps of fat which Jason swiftly removed and hid from view, although we were told that lamb would be neither tender nor tasty without fat. There was some muttering in the ranks of medics present, as there was when the spinal cord was removed from the seventh cut, the Saddle.

Jointing the Saddle required some nifty sawing, followed by stripping out the spinal cord, a part which under no circumstances is allowed to remain in the carcass of an animal over 12 months old at the time of slaughter.

Eighth cut: the Rack. This involved removal of the skin and with it, the meat from half the length of the ribs, a process known as “French Trimming”, ending up in a row of frilly paper finials. The sweet meat thus removed was used by our Sponsor for Kebabs. He also urged us not to discard the back bone which makes wonderful stock.

And finally we progressed to the best and, in our case, ninth cut: the Mid-loin Fillet. Wielding a cleaver with great precision, Jason produced an array of succulent looking chops, to thunderous applause. 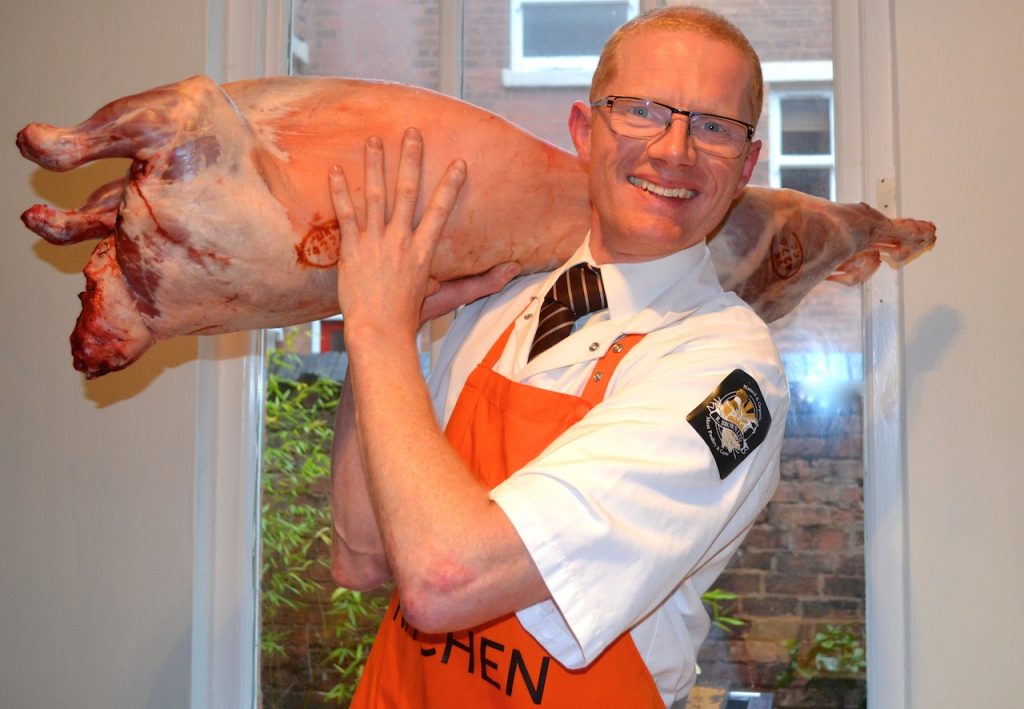 Photograph published with the kind permission of Richard McComb

In a brief Q. & A. session at the conclusion of this fascinating demonstration, we learned that a sheep farmer today gets a mere 40p. for a skin, compared with £5 in previous times; that the cost of removal of the waste products and other services is £15 per beast; that nowadays there is no market for the fat which used to be sold for tallow candles; that beef farmers suffer similarly since medical opinion turned against the use of beef fat for frying fish and chips; that 80% of English lamb is exported and that our Sponsor hears less grumbling from farmers these days than heretofore, albeit that it is in the nature of farmers to grumble at all times.

Asked which was his favourite cut, Roger diplomatically declared himself an aficionado of the casserole.

As our tour of the carcass came to an end, the culinary journey from nose to tail of the lamb continued with our starter dish of warm Tongue Terrine with Asparagus and poached hen’s Egg. The terrine had been made using Agar-agar which would withstand 85 degrees before melting.

In the course of the journey we ate, in no particular order, Tongue, Brains, Cheek, Sweetbreads, Heart, Liver, Kidneys, Rack, Leg and Shoulder of spring Lamb.

With the 2nd. Main Course we compared the 2002 vintage of the same “Vaumoreau”, a wine from Cabernet Franc vines planted over 100 years ago.  Whilst the 2004 was splendid, albeit from a year not regarded as outstanding, the 2002 showed how profound is the influence of the vintage on the end product.  It drew exclamations of delight.

In the event, the demand for more Vaumoreau 2002 could not be met from available stock so we had to fall back on “Cépages Oubliées” 2014 left over from the Rock and Roll Dinner.  Few complained. Perhaps few noticed.

Tim Balfour, for whom this may be his last Buckland dinner, certainly the last at Edgbaston Golf Club, for he is moving on in June, excelled himself.  His personal contribution to the menu was the dessert: a” Madagascan Vanilla Pannacotta with textures of Raspberry”, which appeared rather to be a display of jewellery surrounding a raspberry for authenticity.

With the dessert we drank Brown Brothers Orange Muscat & Flora, 2013, from Victoria, Australia, another sheep-rearing country.

We had been treated to a graphic demonstration of a lamb’s anatomy and to the culinary possibilities thereof, thanks to the expertise of both our Sponsor, Roger Brown, his assistant, Jason Hyde and the skill of our Chef, Tim Balfour and his team.  The latter have catered magnificently to the Buckland Club for the past 7 or 8 years and will be long remembered for their ability to cope with the challenges placed before them by the Club in its quest for authenticity and at times, “strange eating”.

Before the A.G.M., our Minutes Secretary, Prof. David London, was heard (and in part, seen) reading his Minutes of the Rock and Roll dinner via what might have been a video link but was in fact a montage of photographs taken at the R&R Dinner and expertly compiled by our Chairman himself, from the CD which each attendee received, tucked into his or her menu card, at the conclusion of the evening.  Prominent among those featured on the CD was our former Secretary, Roger Wood, who sadly died shortly before Easter and was remembered for his great energy and unfailing good humour.