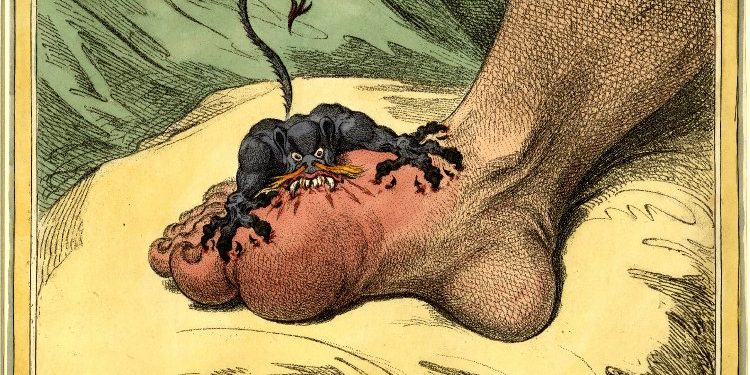 “A pox on this gout!” quoth Falstaff, as might well our Chairman, Andrew Morris; whilst introducing our Sponsor, Professor David London, he observed that the meal awaiting us promised to be good for all except those, like himself, who already suffered from the disease.

Professor London, Emeritus Professor of Medicine at the University of Birmingham, summoned authorities from Seneca to Sydney Smith to vouch for the fact that in the matter of inflicting pain, the is no rival for Gout. This “rosy daughter of Bacchus and Venus” – Seneca’s “Bacchus pater, Venus mater”- has been recognised through the centuries, like the heartless goddess Podagra here, on the front of our menu card, sinking her claws into the big toe of Gillray’s gout sufferer. 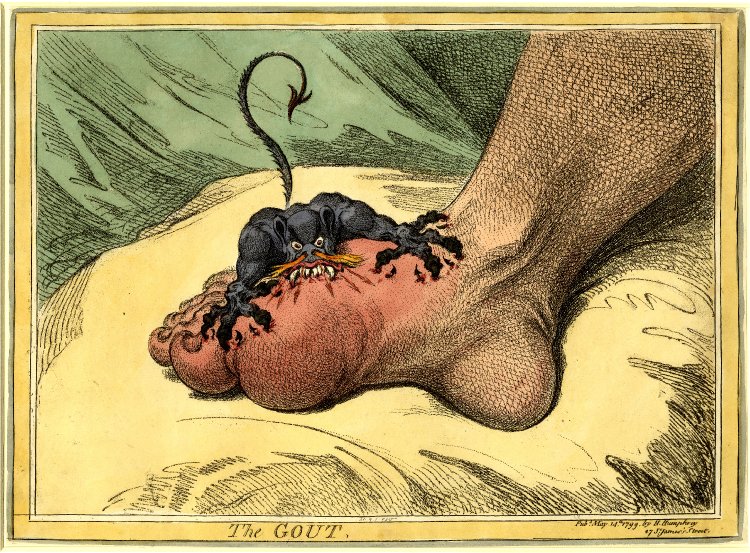 The designer of our meal, Prof. London, adduced a connection between the Gillray cartoon and one of our canapés, Pig’s Trotter Dumpling, both featuring what at a pinch could be described as a big toe. The second canapé, Anchovy Straws, was, like the first, full of purines, of which more anon.

He explained, in excruciating detail, how the concentration of uric acid crystals known as ‘Tophi’, most commonly found in the joints of the extremities, can occur in the most surprising places, practically anywhere in the body. We learned that debauchery played an important part in the development of gout; that it is more prevalent in men than women; that it is a disease of the wealthy rather than of the poor, the old than the young, the intelligent than the ignorant.

Although more prevalent among the elderly, the young are not exempt: William Pitt the Elder suffered from gout as a schoolboy at Eton. At the end of the evening, when invited to stand and be counted, of the 6 or so members and guests who rose to their feet, at least half could be deemed to be young. Thomas Sydenham, ‘the English Hippocrates’, a 17th century Physician, observed that gout attacks “the rich, not the poor, the wise, not the simple.” Lord Chesterfield described it as “the distemper of the gentleman”; arthritis as “the distemper of the Hackney coachman.”
Whilst Sydney Smith considered that heaven was “eating foie gras to the sound of trumpets”, Prof. London warned us that offal in all its forms, being particularly high in purines, was most likely to awaken ‘that toe-consuming tyrant’. A glance at our menu was sufficient to alarm any gout-sufferer present: pig’s trotter, anchovies, tuna, herring and trout, not to mention calves’ liver, roasted vegetables and cheeses, all containing, as they do, lots and lots of purines.

Our injurious starter of Roll Mop Herring, Smoked Trout and Tuna Tartare, beautifully presented with horseradish and lime, was followed by a potentially gout-alleviating sorbet of saffron and lemon. Our Sponsor told us that as far back as the 1st. Century BC, Colchium Autumnale , Meadow Saffron, was known to help break down the concentrations of uric acid crystals. However, even the delightful crocus, a pot of which adorned each table, came with a serious health warning: eating it could cause diarrhoea and any part of the bulb was very, very poisonous. It was only the delicate, fragrant styles and stigmas of the crocus flower (visible in our sorbet) which have any curative property.

There followed the main dish of Calves’ Liver Stroganoff with Roasted Vegetables. The new Chef at Edgbaston Golf Club, Paul Leary and his staff, are to be congratulated on bringing to the tables, 74 servings of Stroganoff, all tender and succulent, not in the least like the shredded shoe leather some had feared.

And so to another gout–alleviating dish containing Black Cherries, also used throughout history, together with Colchium, in the treatment of gout. This was a Cherry and Skyr Icelandic Mess and Cherry Sorbet, followed by a selection of artisan cheeses; Gloucestershire Brie, Staffordshire Smoked Cheddar and Shropshire Blue.
Some amongst us were beginning to wonder,with so much talk of purines, tophi, uric acid, diabetes, obesity, blood pressure, ‘bad blood fats’, genetics and DNA, if alcohol might get a mention. We were not to be disappointed.

A survey of 47,000 individuals, carried out by a northern university, the identity of which escapes your minutes taker, was said to reveal that the worst form of alcoholic drink for causing gout was beer, followed by spirits and lastly wine. This, our Sponsor said, was palpable nonsense. He cited a 2014 study of the frequency of attacks of gout which showed the blindingly obvious: the more you drink, the more frequent the attacks and it doesn’t matter what form the alcohol takes.
We had started the assault on our liver with Taylor’s Chip Dry N.V. White Port and/or Regent’s Punch, a delicious concoction of green tea, Champagne, Jamaica Rum, Arrack and Brandy with the syrup of infused oranges and lemons, the recipe for which is to be found on our place mats, depicting the famous cartoon by Gillray of Georgy Porgy, both feet and left hand swathed in bandages, proclaiming:”Port cures the Gout!” 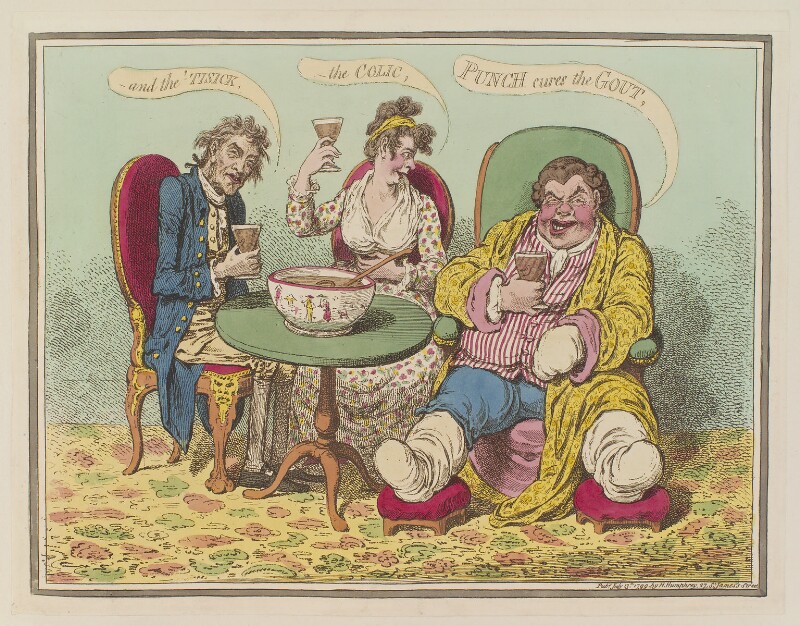 With our starter we drank a dry, white wine from Slovenia, Guerila, 2015, (mistakenly spelled ‘Guerilla’ on our menu) made from bio-dynamically cultivated Zelen grapes, planted on the schist-rich slopes of Planina in the Vipara valley. At only 11% A.B.V. it was an excellent accompaniment to the fish.
There followed a red wine, Les Cépages Oubliés, 2015, from the Sologne. Made by Henri Marionnet from the little known Gamay de Bouze grape, whose juice is red. It was intensely dark and robust. With dessert we drank Henriques & Henriques 10-year old Bual Madeira – delicious!

Prof. London concluded by remarking that heredity plays a large part in determining the likelihood that one will develop gout and “you can’t do anything about that – the rest, you can.”

In thanking David London for his erudite and thoroughly entertaining presentation, not to mention his genius in devising a meal of such relevance and culinary interest, our Chairman observed that he was relieved to find that he could now blame his father for his gout.

There followed the A.G.M. 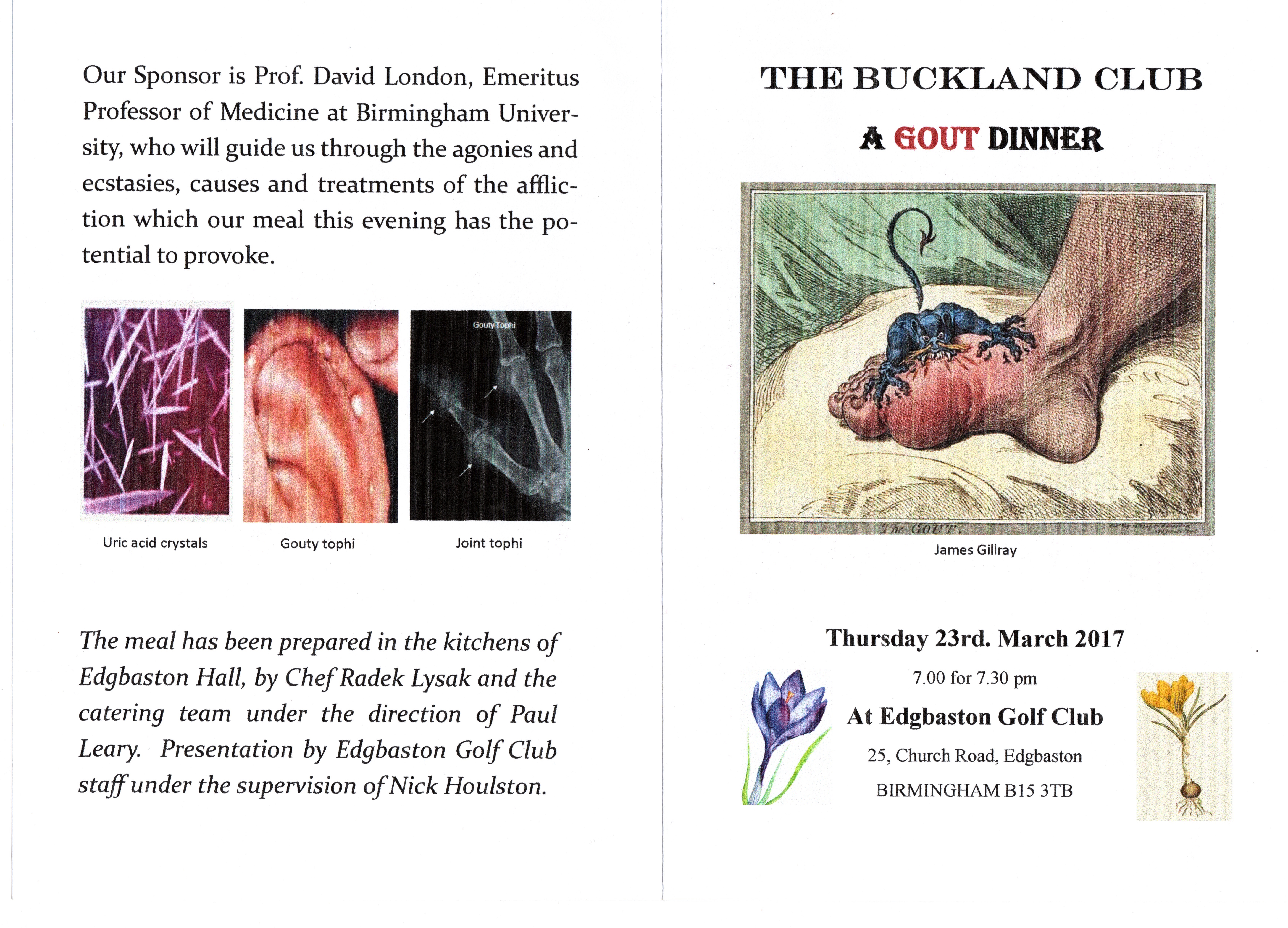 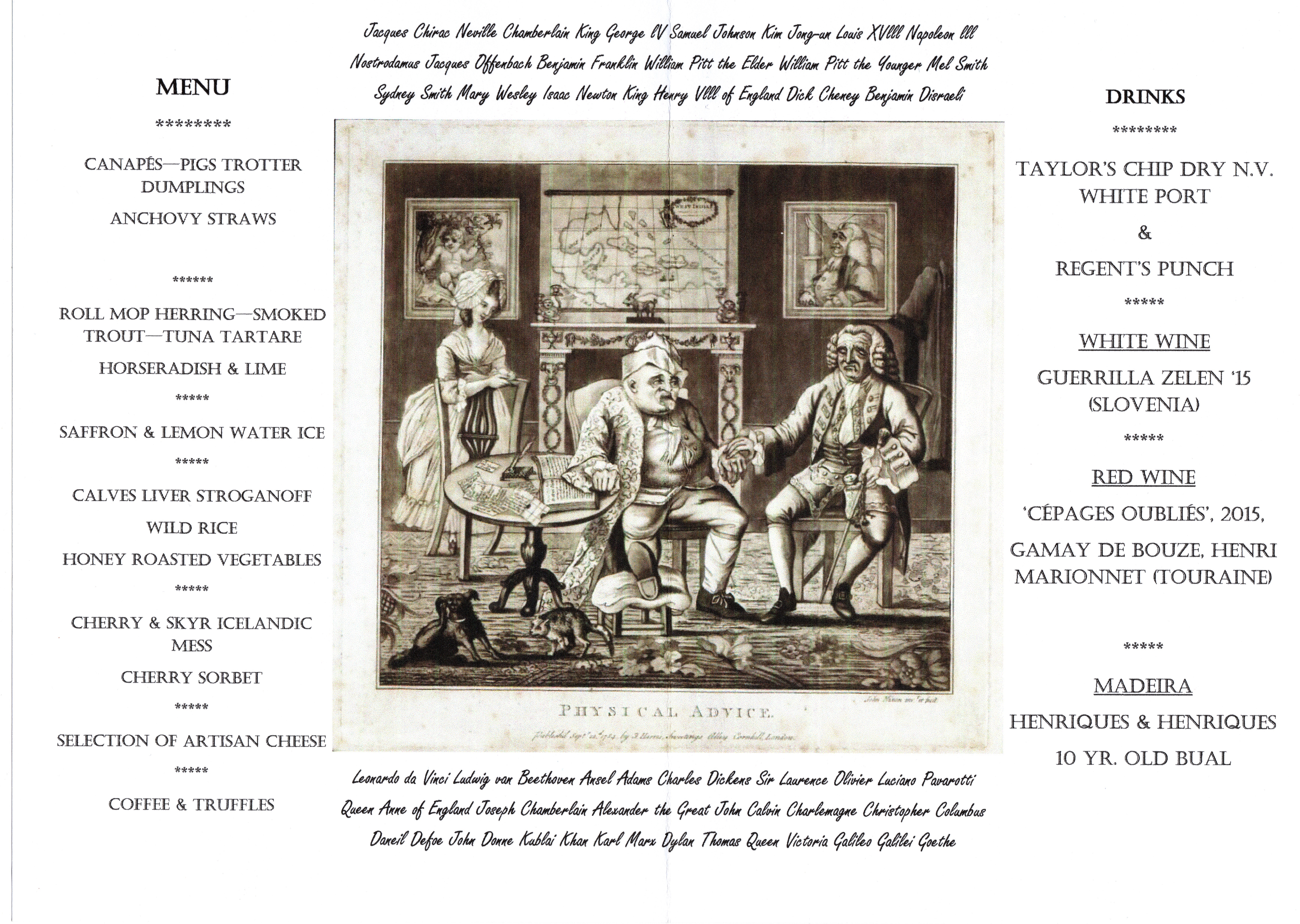