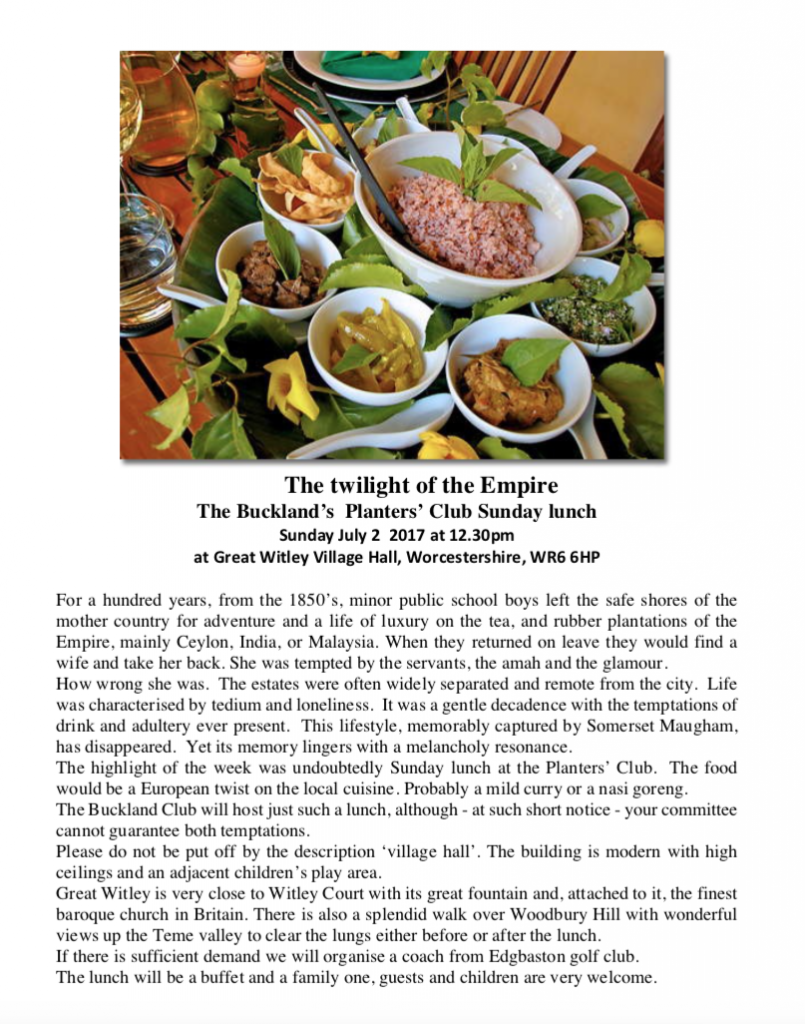 “A Twilight of the Empire Lunch”

‘Twas on a Sunday morning in the early days of July 2017 that members of The Buckland Club and their guests, having formed a quorum, gathered at the planters’ bungalow that was Gt. Witley Village Hall, for a traditional Sunday lunch, preceded by original Singapore Gin Slings, as concocted and served at the famous Raffles Hotel.

Our stalwart Hon. Sec., Tony Tidmarsh, had sounded the jungle drums to good effect: not only had he, virtually single-handedly, devised and organised the provision of our lunch, chosen the venue and the caterers and leafleted the members, but had finally door-stepped many, to ensure a goodly attendance.  And still he had the energy to entertain us with a most amusing and instructive introduction to the luncheon itself, explaining by way of a brief family history, the origins of the title: “A Twilight of the Empire” lunch.

Uncle Hugh, a pupil of Giggleswick School, was sent, as were many young men whose academic achievements did not immediately suggest a glittering career in the City, the Army or the Church, to the Colonies, to seek his fortune as a tea planter.  Colombo was his posting, where he found that in the Kandy Club, there was not a single native Sri Lankan to be seen; neither, in spite of his careful searches, and those of his best friend ‘Boots’, could he find a wife.  Obliged to return home at the age of 26, he finally succeeded in marrying his cousin.  This, we were told, was something of a tradition, explaining perhaps, the prevalence of 6-fingered Brexit-supporters in the family.

Tea was a vital commodity, with hundreds of firms vying for a share of the market.  The planter’s life was hard and the occasional Sunday lunch, probably the only opportunity to make contact with neighbours or fellow-countrymen, most of whom lived many miles away from one another or any centre of population.  The diet was determined by several factors, not least the total absence of refrigeration; locally available fresh ingredients, reinforced with Marmite and Carnation milk, resulted in a sort of Anglicised version of curry, as experienced, perhaps, at Veeraswamy’s, the only Indian restaurant likely to have been known to these intrepid but essentially conservative planters.  Spices served to disguise the “off” flavours which were the regular accompaniment to most dishes.

We were not required to submit to a totally authentic re-creation of a Planter’s Lunch; no off flavours were detected in our selection of canapés, although your minutes-taker  surmises that Vol-au-Vents, Cheese Straws, Stilton Rarebits with spiced Pear and Fried Prawns with Mayonnaise, would not have withstood the heat and humidity of Colombo or Singapore without the comforting balm of Raffles’ own Singapore Gin Slings.  We were comforted with Mulligatawny Soup, as reassuring as any soup could be and a confidence-building precursor to Nasi Goreng.  Alternatively – or together therewith – we were offered Chicken, Fruit and Vegetable Curry, with steamed rice and apple and onion Chutney.  Both were excellent.

With a little imagination, one could picture our plain fruit salad conjured from riper and more exotic varieties of fruit than were available in our English climate.  One looked in vain for “Carnation” milk.

Members and guests had been advised to bring their own wine if appropriate: wine-drinking, we were told, was an anachronism and not practised by the average planter.  Only the seriously rich would have been likely to drink wine; the Planter would have stuck to beer or Gin and Tonic during daylight hours and cheap Whisky at sundown.  The ladies, and doubtless their men-folk, enjoyed lots of liqueurs – Crème de Menthe, Cointreau, Cherry Brandy, Bénédictine – with the exception of the first, all ingredients of a Singapore Gin Sling, the recipe for which is appended hereto.

We rounded off a splendid and almost authentic Planters’ Sunday Lunch, reminiscent of the twilight of the British Empire, with tea and coffee.  Was it Camp?

For those wishing to recreate the Singapore Gin Sling, the recipe is as follows:

Shaken over ice and served with a Maraschino Cherry and a slice of Pineapple.

Our thanks went to K.B. Catering for the food and particularly to Linda and Tony Tidmarsh for their spirited re-creation of the Planters’ Sunday Lunch.

There were present 48 members and guests.