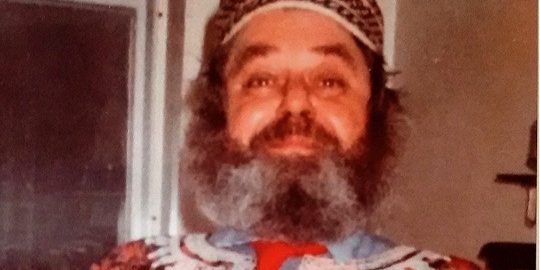 Anthony Appleton Mornington Bryer, Professor of Byzantine History at Birmingham University, Public Orator and Frank Buckland look-alike, known to all, his children included, as BRYER, was Minutes Secretary to the Buckland Club from 1988 to 1999, recording the proceedings of the Club in his unique style on 21 occasions. The depth of his attachment to the Buckland Club was matched, as many of his friends and family have attested, by that of his interest in food and drink. Approaching the first anniversary of his death at the age of 79 (22nd October 2016), your Committee wishes to remember BRYER in the most Bucklandish way possible – with a celebration of some of the things he most enjoyed: food, wine and Byzantium. 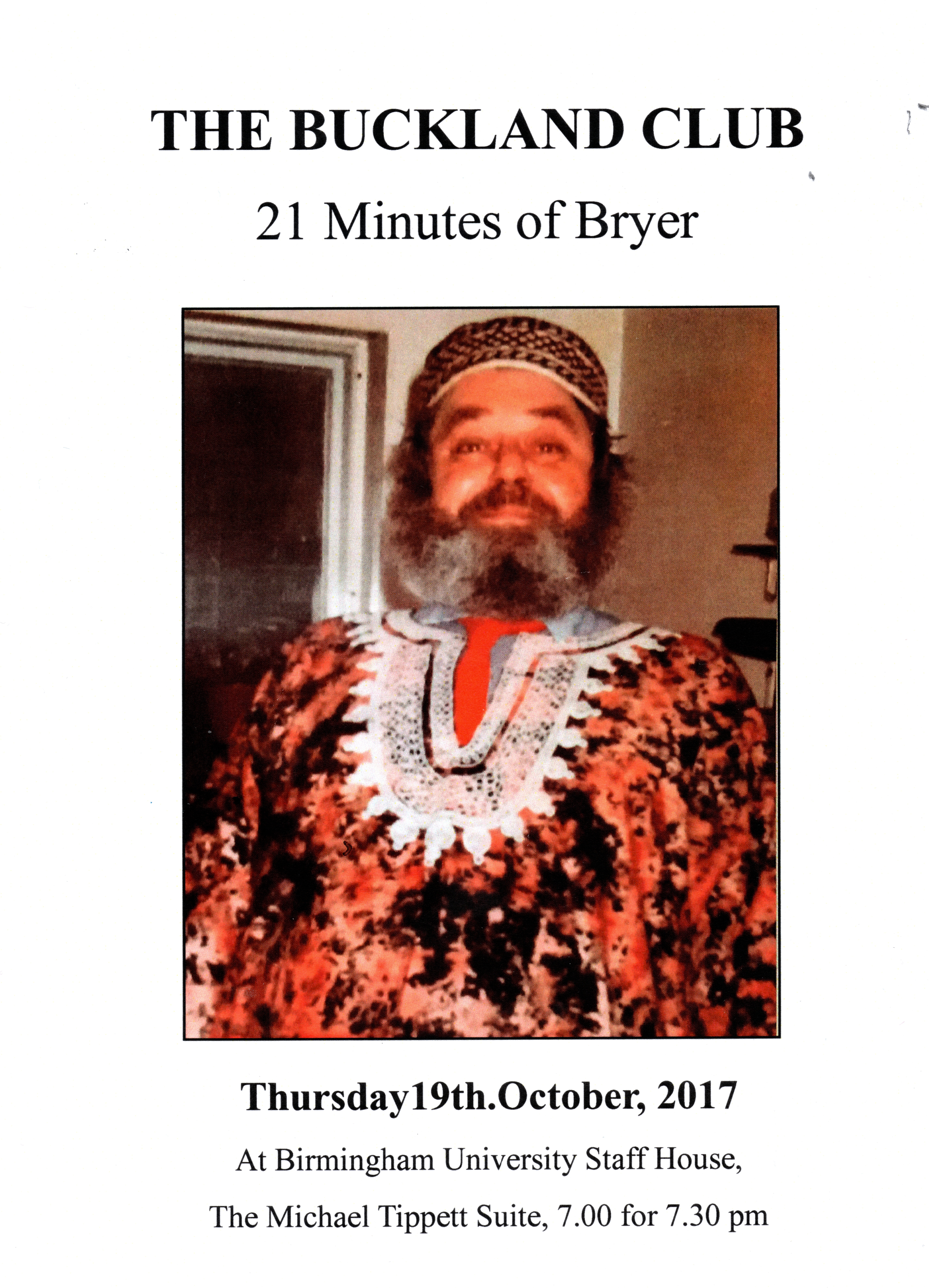 It might have been Twenty-One minutes of Bryer, but in terms of sheer pleasure and joie de vivre it was more than two hours. Staff House, University of Birmingham, an earlier watering place for the Club, welcomed back 65 of us to be led through the eccentricities and hear the words of one of its former denizens, Professor Anthony Bryer, and to enjoy a reprise of some of the dishes and evenings he had recorded. It was as though he was with us in the room. Well, he might not have been physically present, but we had our ex-Chairman, menu designer and part time Meeting Secretary, three in one but not one in three, Roger Hale, our very own Bruce Forsyth, elegant in Forsyth waistcoat, matching bow tie and a non Forsythian Fedora to carry us through a Bryer experience, Buckland as well as domestic, with the latter fleshed out by co-sponsoring wife, Jenny, and daughters, Theo, Katie and Anna. 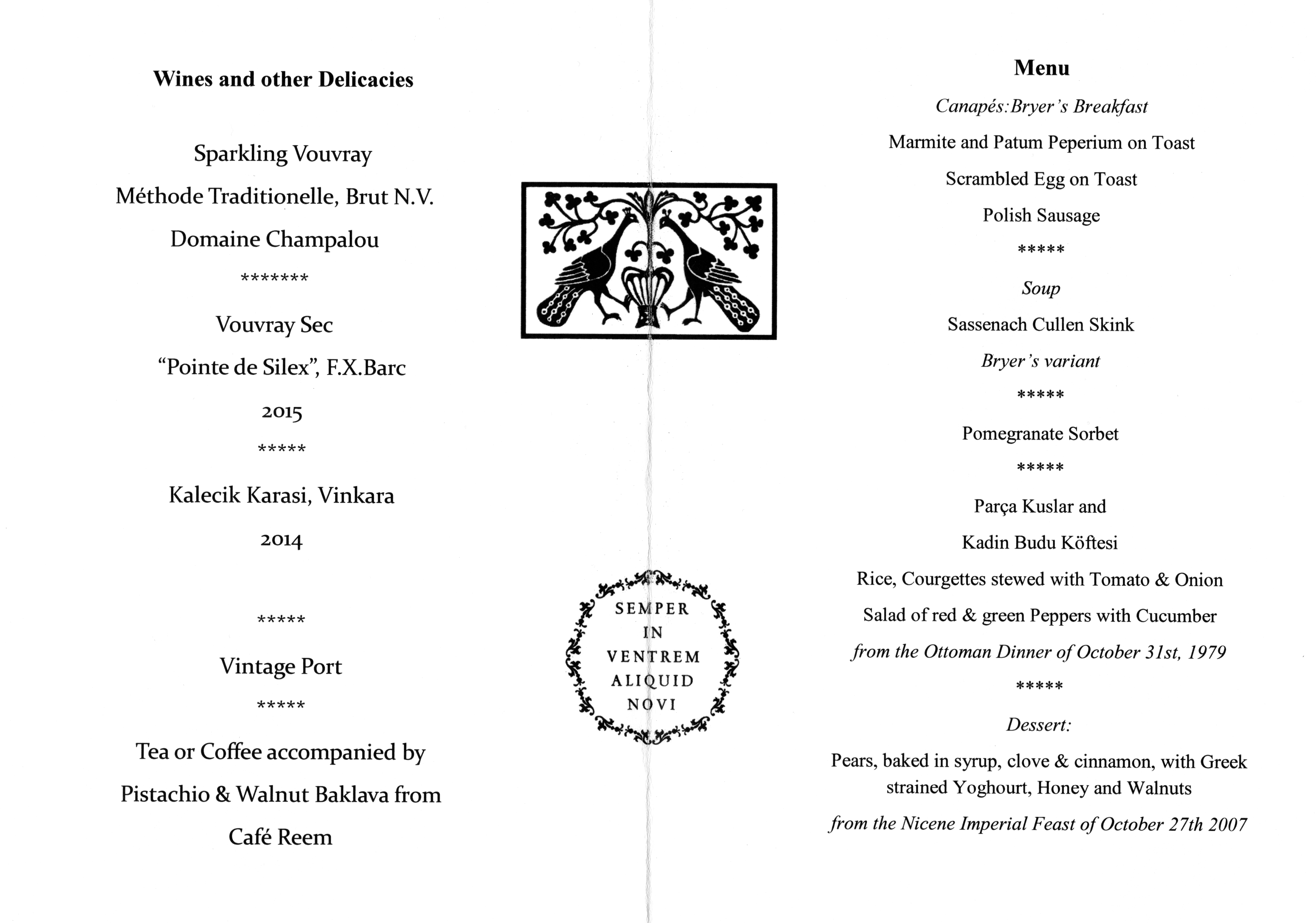 As is our wont we began with canapés, titled Bryer’s Breakfast. Marmite and Patum Peperium, also known as Latin Fishpaste, on Toast, Scrambled Egg on Toast and Polish Sausage, accompanying a Sparkling Vouvray, Methode Traditionelle, Brut N.V., Domaine Champalou, indeed dry, but well rounded, very good. Your scribe arrived too late for the canapés, so, as an ex-scientist, he cannot give a personal view on something he did not experience, but everyone he has spoken to said they were good – so good, they were.

Once we had assembled at table and before getting down to the main business of the evening. Roger Hale read the minutes of the Gout Dinner. We then proceeded with our co-sponsor compere introducing the subject of the dinner, the late Professor Anthony Bryer, In Memoriam, a celebration, with those of us who knew him predicting that the evening would be nothing less than joyous. And that it was, and there he was, on the front and back of the menu card, looking like a cross between an Orthodox Priest and Frank Buckland.

Katie filled us in about the Bryer Breakfast, the paternal partiality to the above – not the Vouvray, at least at breakfast – together with sweetcorn, burnt toast, Turkish tea and the single fish finger. She also recounted the episode of the unexpected appearance on one occasion of a Greek Orthodox priest, the real thing, someone who might easily have been mistaken for Bryer himself.

A bit later we learnt from Anna more about his quartermastering, of the monthly delivery of the Cheddar truckle, getting higher and higher as time went by, of the affectionate understanding of his transactional practices by the shopkeepers of Harborne  – “Oh, THAT Professor Bryer!”  – and about forgotten champagne bottles exploding in the deep freeze, an occurrence not unknown to other Buckland members. 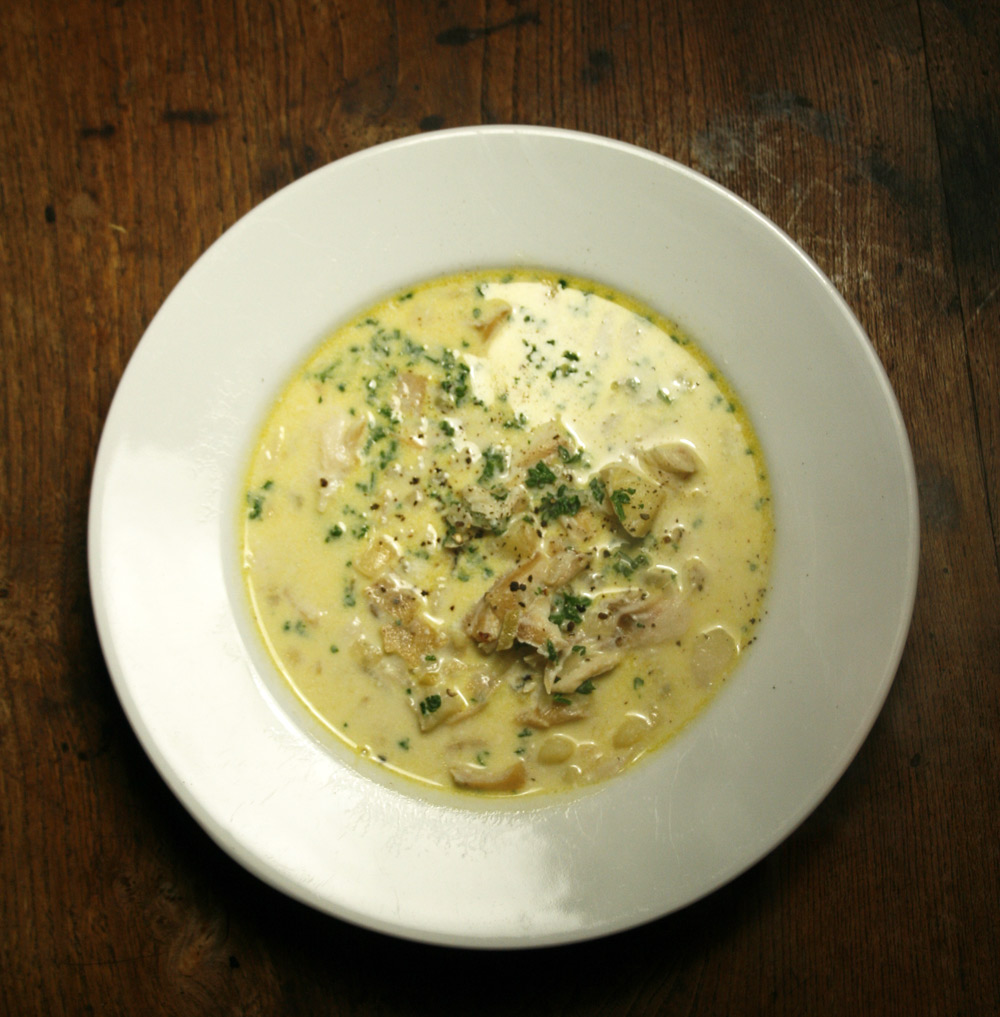 The soup was a Sassenach Cullen Skink Bryer’s Variant. Theo filled in the details, thick and porridgy, inordinate amounts of pepper, not just the traditional haddock but also, Scots forfend, added bacon. And that is what we were served, a perfect reconstruction of his signature dish.  With it we had another Vouvray, this time a Sec, Pointe de Silex F.X.Barc 2015. This and the sparkling wine were selected by our co-sponsor and our chairman,who together, having our best interests at heart, performed the onerous business of scouring the vineyards of the Loire on our behalf. Magnificent. Duty is Duty whatever the call.

After a pomegranate sorbet to cleanse the palate, we were served an excellent Parça Kuslar and Kadin Buduand Kôftesi with Rice, Courgettes stewed with Tomato and Onion and a Salad of red and green Peppers and Cucumber, taken from the Ottoman Dinner of October 1979, sponsored by Sir Stephen Runciman. The title of the dish translates as “Meat balls like women’s thighs”. Some anatomical confusion here, but we do live in a transgender age. The 1979 minutes recorded it as the best dish of a nondescript evening. In 2017 we found it most enjoyable. The accompanying wine was a Turkishred, Kalecik Karasi, Vinkara, 2014, easily mistaken for a simple Pinot Noir. Legend has it that the grape has been grown and the wine made since the time of the Hittite empire 1650-1200 BC, a pretty thought, but evidence-free.

According to excerpts from the Twenty-One, the Buckland has thrived on disasters of Ealing Comedy proportions. The Mongol dinner as recounted from the distaff side by Jenny, Bryer’s widow, hits the jackpot. We were due to be served horse at a time when horse was not freely available, but one was obtained. Unfortunately, at the time of butchering it was found to have malignant disease, so being judged unfit for human consumption, beef was substituted, a mischief spotted by some perceptive diners, quite the opposite of what Tesco was alleged to have done in the horsemeat scandal of a year or two ago. To go with the food we were offered asses milk, which as Jenny told us, had been secured by Bryer registering himself as an orphan foal and then fermented in the airing cupboard; “disgusting” is too kind a word.

Then there was the European dinner where the chefs had forgotten to take the plastic wrapping off the salami allowing it to get between the dentures of some of the members and the occasion when the sole reminded diners of the wet towels handed out on boarding aircraft,

Another instance was the Dinner from Finland when the dried Lye-fish was reconstituted in a mixture of Potassium and Sodium Hydroxides. Bryer quoted the sponsor Jaakho Rahola “This corrodes most metal cooking ware before you can hazard a bite”. Members were given warning enough by being reminded of the oldOstrobothnic maxim:”It can’t be worse than the pox.””Bryer described this as one of the supreme moments in the Club’s history.

The Macedonian dinner, sponsored by an authority in the field, also came in for harsh words, of which Bryer wrote ”His entrancing and learned book costs less than the Macedonian Dinner did with the further advantage that you do not have to eat what’s in it”.

As members and some guests will know, from time to timewe have a Summer Party. One such was a South Arabian Desert Feast held Al Fresco  in a downpour. Desert Rain is an extreme rarity but Jupiter Pluvius knew the Buckland was coming up so put it in his diary,

To add to the chaotic mix, a bomb scare caused the abandoning of the Icelandic Dinner of 1989, but the Buckland, ever resolute, reconvened for it two weeks later.

But to return to the present.

The dessert was a repeat of that presented at the Nicene Imperial Feast of October 2007, Pears, baked in syrup, clove and cinnamon, with yoghourt, honey and walnuts. Edible but unremarkable. A vintage port, innominatus,came with it. This was followed by tea or coffee accompanied by a delicious Walnut Baklava from Café Reem.

These minutes might well have been not written. Your scribe’s car was marooned by the University railway station, unable to find a way to Staff House. Birmingham campus has turned itself into a near impregnable fortress. All it lacks is a moat and a drawbridge. In modern terms it was surprising not to find barbed wire, searchlights and machine gun nests.; perhaps these will come when the new funding arrangements are agreed. Roads torn up, barriers where there used to be ready access. Truly not just an abstract “Safe Space”. Fortunately, Darren Harris, the Figaro of Staff House in terms of multitasking, not of hairdressing, saved the situation by guiding the car through the Snakes and Ladders of the University, not that, on the basis of precedent, does the Meeting Secretary necessarily have to be present for minutes to be produced.

For we did hear that the illustrious subject of our eveninghad in absentia constructed an entirely fictitious set, relating to a Burgundian Dinner where it was alleged that certain members came dressed as historical figures, where blood from rabbits sacrificed for the main course was seen to flow under the kitchen door, where so muchwas drunk that, to quote Bryer “…some members were handcuffed discretely and given alternative transport. Be assured that they remain on the books and that tonight’s dinner is also being served in Winson Green Prison – possibly our next venue”. If only all Fake News was like that.

At the end our Chairman, Andrew Morris, thanked Roger Hale, the co-sponsor, for masterminding the evening and the family for providing so much of the back story. He also thanked Darren Harris for managing the evening, the chefs under the supervision of Mark Houghton for preparing the food and Staff House for welcoming us back.

An account of the occasion would not be complete without acknowledging the excellent facilities for projecting photos of Bryer through the ages, putting those used at an earlier venue absolutely in the shade – literally. On this occasion not only were pictures displayed of our hero but we were also shown an image of a cast of the toad commissioned by Bryer and made by Anna’s husband to commemorate the performance of an incomprehensible experiment to establish the origins of life on earth by looking to see whether these amphibians could survive encased in rock. This was more to do with Buckland zoologist than Buckland gastronome, although Toad in the Hole did get a mention. 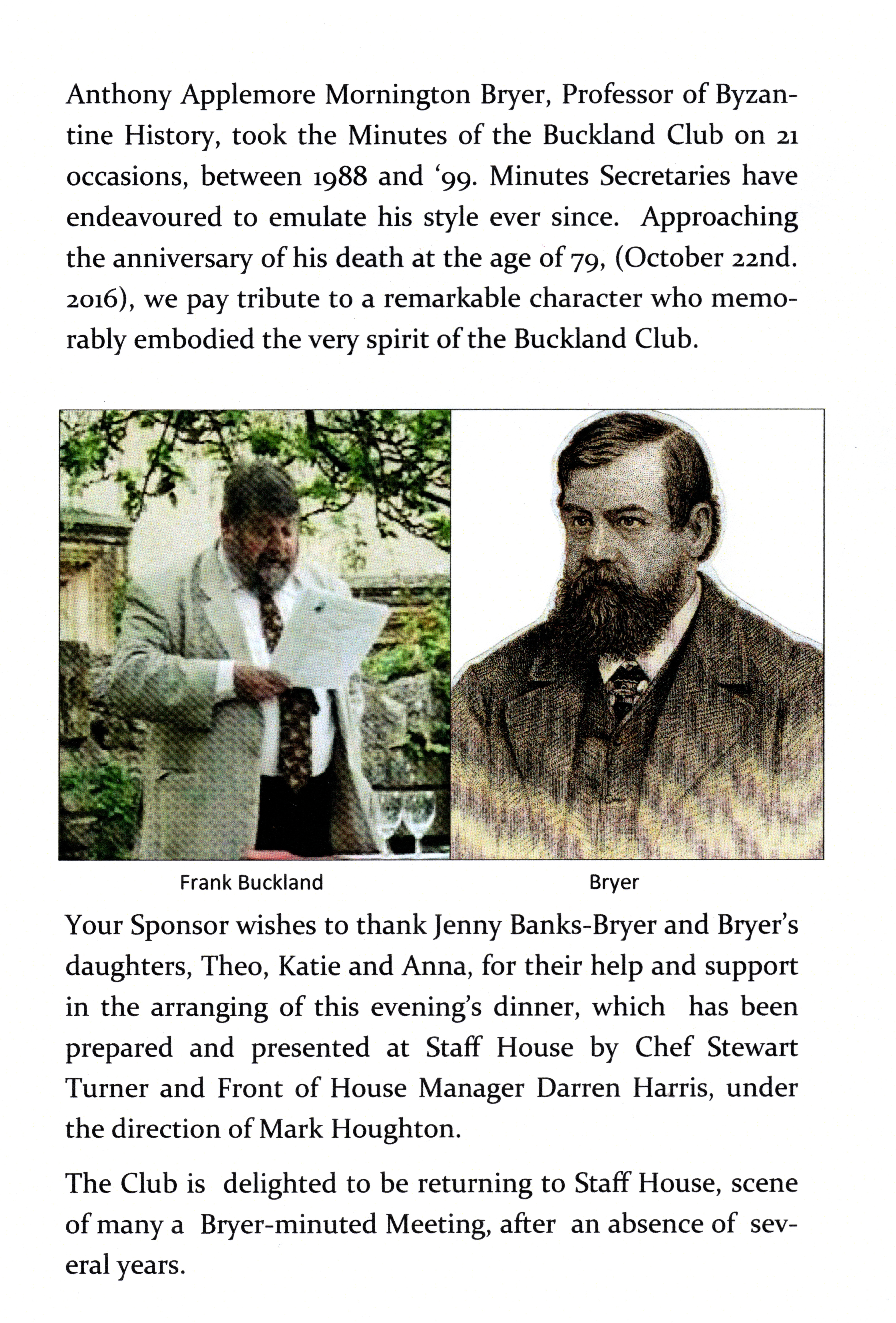 The evening was concluded by Anna graciously thanking us on behalf of the family for the celebration, reminding us that our dinner was being held within a few days of the anniversary of her father’s death.