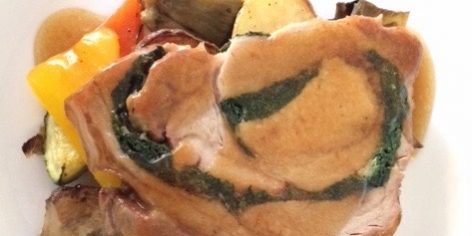 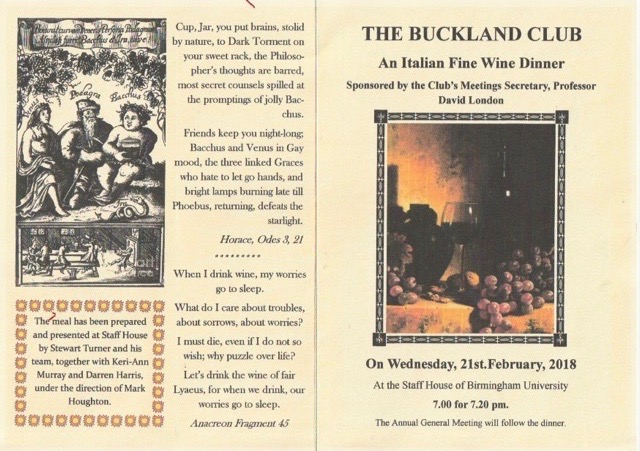 Minutes of the Evening

Italia! Italia! Made for Bacchanalian pleasures; a land of abundant wine and truffles; permanently illuminated by a beneficent sun, where the pleasure principle informs every aspect of life; the land of chiaroscuro.

“Cup, Jar, you put brains, stolid by nature, to Dark Torment on your sweet rack; the Philosopher’s thoughts are barred, most secret counsels spilled at the prompting of jolly Bacchus.” Thus Horace, Odes 3, 21, setting the tone for this celebration of the best of Italian gastronomy.

Our Sponsor, Professor David London, could not – indeed never attempted to – disguise his love for and extensive knowledge of Italy, from head to heel (or Alto Adige to Apulia, if you prefer), which he was eager to share with Buckland members and guests, 62 in all, gathered in the Michael Tippett room of Birmingham University’s Staff House, in sight of the Campanile, ‘Old Joe’, Birmingham’s own homage to Italian architecture. 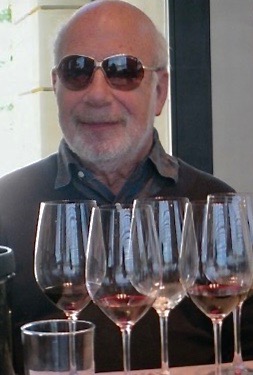 To this end, David, one of many Davids to make an appearance at the feast, had laboured long in the operating system environment which is called Apple, yea, even unto the squeaking of the pips, in order to display on the electronic screen and quondamblackboard, as it occasionally became, all the sights and sounds associated with the theme of the evening, Italian culture, history, geography, gastronomy and generally magical appeal: Michaelangelo, Donatello, Brunelleschi, Ferrari, Berlusconi, the list is long.

Already alerted by the pre-publicity, everyone’s expectations were great and made even greater when, led judiciously but firmly by Darren Harris (to whom all praise) through safe ways, not omitting health and safety warnings and fire drill, into the dining room, an astounding sight met their eyes; eight tables, each gleaming and twinkling red and pale gold with 56 glasses charged with wines from the length and breadth of Italy, all awaiting critical appraisal at our Sponsor’s command.

But first, our Chairman bade us be seated while he spoke movingly of the passing of Harlan Walker, sometime Buckland Club Secretary, Chairman, President for Life and constant inspiration for the Club which had been so much a part of his long life and to which he contributed so much.  As we stood for a moment’s silence in his memory, many must have felt, with Andrew Morris, that he will be sorely missed.

And so we returned to Italy, the Italy which invented Opera, the Opera which celebrates Bacchanalian pleasures, provides the means of enjoying such and which we all were impatient to experience for ourselves, faced as we were with a veritable forest of glasses of Italy’s finest.

But before David of London, not David of Campari nor David of Michaelangelo, could fire the starter’s gun, David of London had to overcome the giant Goliath that was Microsoft.  What lay at the core of the problem was that the Staff House display screen didn’t like Apple. Like a horse unwilling to drink, Microsoft was recalcitrant, bolshie even, finally showing itself untameable, neigh, unbreakable, by throwing itself to the floor in a fit of pique.  Maybe it had objected to being asked to play passages from La Traviata and Don Giovanni on YouTube; maybe it was the unashamed nakedness of the Florentine Davids which had provoked its sulks and fits of rage.

No matter that the previous day’s rehearsal had been problem free, Professor London was unfazed by the arrival of the Gremlins; years of experience at the lectern had prepared him for this and so, with a flourish of his lecturer’s pointer, a.k.a. walking stick, we proceeded to the long awaited course of Antipasti, accompanied by a robust red wine from the west coast of Apulia, in the heel of Italy, a Primitivo di Manduria, 2014, by Varvaglione. In Italy, Primitivo may well claim primacy among all those grape varieties purporting to be synonymous, culminating in the upstart Zinfandel but we were better informed; it must yield to the Croatian Tribidrag.  At 14.5% ABV this pugilist held its own with all but the magnificent Brunello di Montalcino and certainly set off the delicious Antipasti of Incapriata, Prosciutto, Marinated Mussels and Grilled Aubergine on Burrata.

Mention should be made of our welcoming drink, served in the Aroma Café; a mid-range Prosecco by Ruggieri, Gall’Oro, Valdobbiadene, NV, most pleasing to the palate, at a modest 11% ABV.  We were shown the ultra-modern winery in the Veneto where it was produced but at this moment, Microsoft’s antics sabotaged the Sponsor’s plan to expound on the production method and grape varieties used, save for explaining that, unlike Champagne, which enjoys secondary bottle fermentation, Prosecco has the secondary fermentation carried out in big pressurised, stainless steel tanks prior to bottling, hence its competitive price.

At length the Primo Piatto was served, a clear-ish broth with bread and smoked pancetta dumpling, the latter having had plenty of time to acquire a solidity which some found surprising. 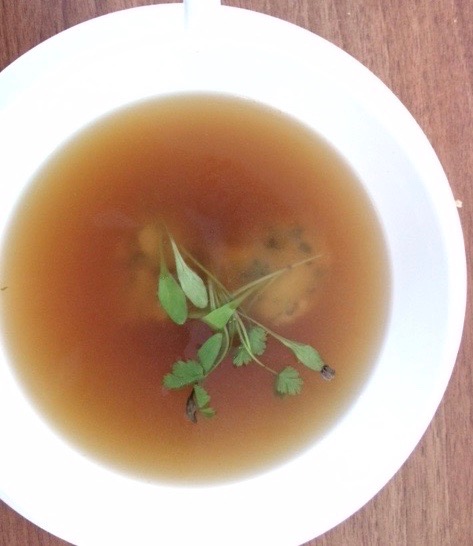 However, in the best Buckland tradition, our chef Mark Houghton,  had created a dish which was authentically Sud-Tirolesi, reflecting the Germanic character of this northern region, as did the name of the maker of the two contrasting white wines which we tasted: Hofstätter.  His first Pinot bianco, light in colour and still frisky, was younger by a year than its 2014 cousin, Villa Barthenau and was a good example of an easy-drinking Weissburgunder wine, while the latter had acquired a more serious character which gave great pleasure.

Our Sponsor had devised a gastronomic tour of all Italy, so now we travelled south for our Secondo Piatto, to Tuscany, for succulent Florentine roast pork 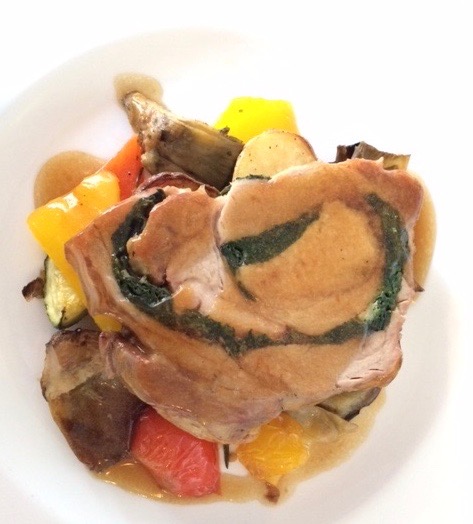 served with rosemary new potatoes, courgettes, peppers and artichoke, accompanied by two red wines from the district of Montalcino, both by Il Poggione.  The first was a Rosso of 2015, raised for a year in a mixture of small ‘barriques’ and big ‘botti’ – what  the French call ‘fûts’ or sometimes ‘foudres’ when they grow very big – as opposed to the more famous Brunello.  The latter was from the 2012 vintage and had spent 36 months entirely in ‘botti’, from which it gradually acquired a deep hue and subtle oaky character, before spending a further year in bottle.  It was magnificent.  All the red wines tasted this evening had been double-decanted some hours previously and poured into glasses before the start of the meal, which resulted in softer tannins and allowed the Sangiovese to develop greater depth and complexity as the evening wore on.

Our Sponsor was explaining the wonderful diversity of Italian wine production according to region, and had just spoken of a book, ‘The Pursuit of Italy’, which argued against the unification of Italy at the time of the Risorgimento, when the horse Microsoft bolted and we never found out if ‘Italexit’ was coming our way or not.

Deprived, briefly, of his illustrations, Professor London guided us back up north to Piedmont, where the foothills of the Alps, often shrouded in mist and subject to periods of extreme cold, favour the aptly named Nebbiolo grape, which gives us both the tough, masculine Barolo and the more (politically incorrect), feminine, Barbaresco.  Both proved the perfect accompaniment to the Piemontese cheeses, a meltingly gorgeous Gorgonzola dolce, and Occelli al Barolo, a blend of cows’ and goats’ milk with a crust of Nebbiolo grape skins and pips.  Both wines lived up to their reputations – even though we were told that they would benefit from more years in the bottle. The Barbaresco was from the town Cooperative and very good, if a little young (2013) but the Barolo was most interesting; as a result of a mix-up at the Wine Society, our Sponsor had obtained, at no extra cost, a rare and costly ‘Garage’ wine by Luigi Baudana, bottled by Vajra from a total of only 10,800 bottles in 2009.  Members and guests were duly thankful to the Sponsor for his acumen and impressed by the quality of the organically produced, exceptional, artisan wine.

And so to the extreme south for our last libation: to the island of Pantelleria, south of and closer to Africa than to Sicily, and a gorgeous, equally rare and costly dessert wine, Ben Ryé (the name is Arabic, meaning ‘Son of the Wind’), Passito di Pantelleria, by  Donnafugata, 2014.  Its astonishing 14.5% ABV failed utterly to overwhelm the intensely concentrated, honeyed fruit of the late-harvested, almost desiccated Zibibbo grape from which it is made. Zibibbo must have more pseudonyms than practically any other grape variety, Muscat d’Alexandre being the best known.  It was a perfect match for our colourful Cassata, with which we brought this most memorable meal to a sweet conclusion.  It may be a little churlish of your minute-taker to record that some baulked at the extraordinarily bright green marzipan clothing the Cassata; he found it good, but then he always relishes the challenge lurking in almost every Buckland menu.

In conclusion, I must quote David London’s final observations on his beloved Italy:  raising an elegant, leather violin case, he reminded us that all may not be what it seems; the Thompson sub-machine gun makes its own kind of music; Italy’s iconic symbols come not only from respectable antiquity; think of the Borsalino hat he sported, La Dolce Vita, Bitter Campari (the invention of another David), but above all, think not of the oscurobut the chiaroin chiaroscuroand let the sun always shine on the land with more varieties of wine than all its immediate European rivals put together –  Portugal: 77, Spain: 80, France: 204, but Italy: 377!  Viva Italia!

David London’s achievement in devising and presenting this monumental tribute to joyful Italy cannot be overstated.  The Gremlins were routed, Goliath slain and his months of preparation fully justified.  It was a tour de force. 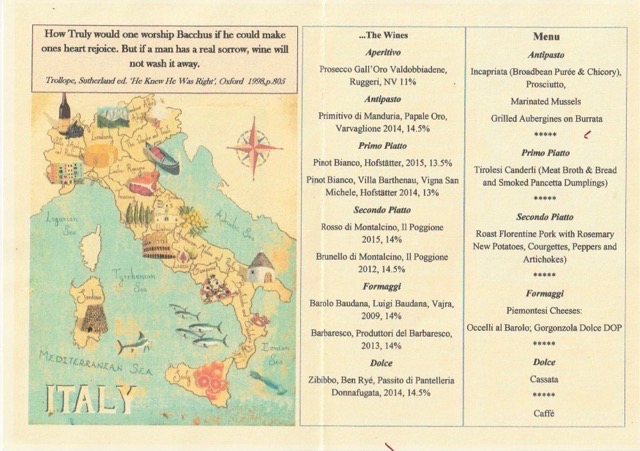