Minutes of the Irish Dinner

The Chairman, Professor A.P. Thomson, presided. The menu, supplemented with pertinent quotations, is given below:-

The sponsor on this occasion, and it may be said, the impresario, was Professor Thomas Bodkin, who elevated the presentation of Buckland Club dinners to a niche among the fine arts. 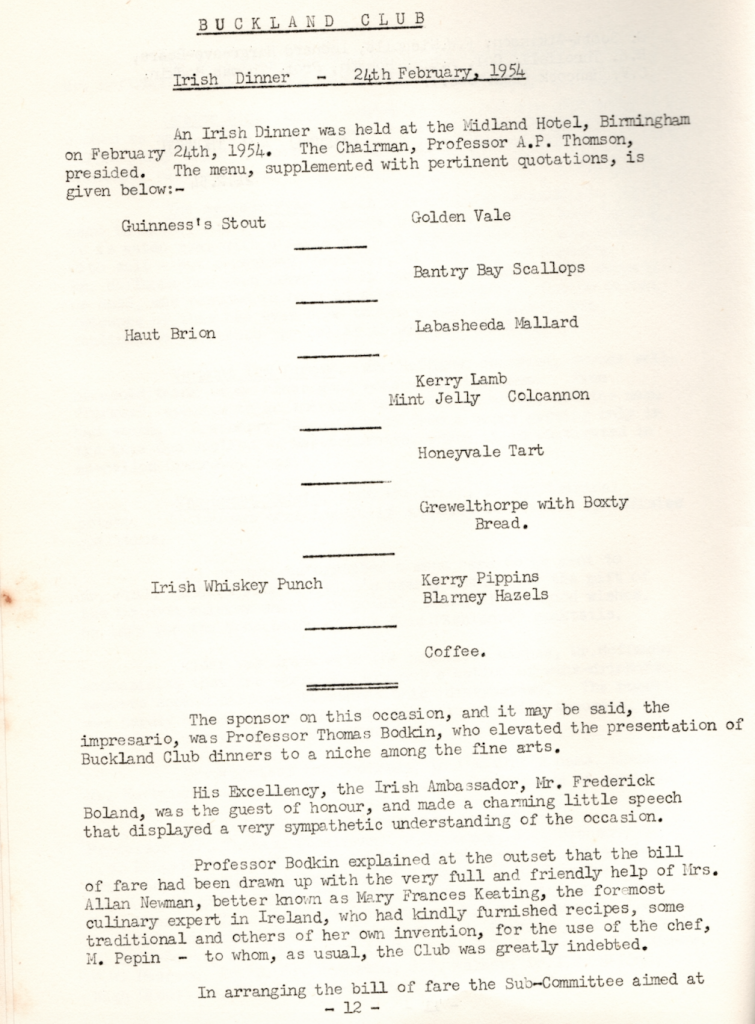 His Excellency, the lrish Ambassador, Mr. Frederick Boland was the guest of honour, and made a charming little speech that displayed a very sympathetic understanding of the occasion.

Professor Bodkin explained at the outset that the bill of fare had been draw up with the very full and friendly help of Mrs. Allan Newman, better known as Mary Frances Keating, the foremost culinary expert in Ireland, who had kindly furnished recipes, some traditional and others of her own invention, for the use of the chef, M. Pepin – to whom, as usual, the Club was greatly indebted.

In arranging the bill of fare the Sub-Committee aimed at providing a meal that should be both copious and palatable rather than a series of outlandish dishes from the remotest margin of the Celtic fringe. As the dinner pursued its copious and palatable way, from the Golden Vale soup to the Blarney nuts, members grew aware of a delicate but all—pervading national flavour. Some, perhaps, attributed this to a subtle trace – a mere soupcon – of a brogue in the utterance of the speaker.

What matter, then, if the Labrasheeda Mallard or the Kerry Lamb were, at best, of Anglo-Irish descent? As much as possible of the ingredients had been obtained direct from Ireland. At the same time the Sub-Committee had eschewed such characteristically, but not universally appreciated, features as sloak, for which mint jelly was substituted, and carrigeen blanc-mange, which was replaced by the Honeyvale Tart.

A great difficulty, Professor Bodkin pointed out, in planning a distinctively Irish feast was that there was so little difference between the fauna and flora of Ireland and those of Great Britain. As everyone knew, there are no snakes in Ireland – not even in Northern Ireland – and no moles in Ireland. Unfortunately, there are no nightingales either, or they might have provided the delicacy which Lucullus considered to be the supreme masterpiece of culinary art: a dish of nightingales’ tongues. Though the Irish hare was different from the English or Scottish varieties – being bigger and better of course – it was to be feared that the difference might not be noticeable enough when the creature was cooked. The emphasis of the menu, therefore, was on the use of distinctively Irish recipes. Some of these recipes were solicited by members before the dinner was over. 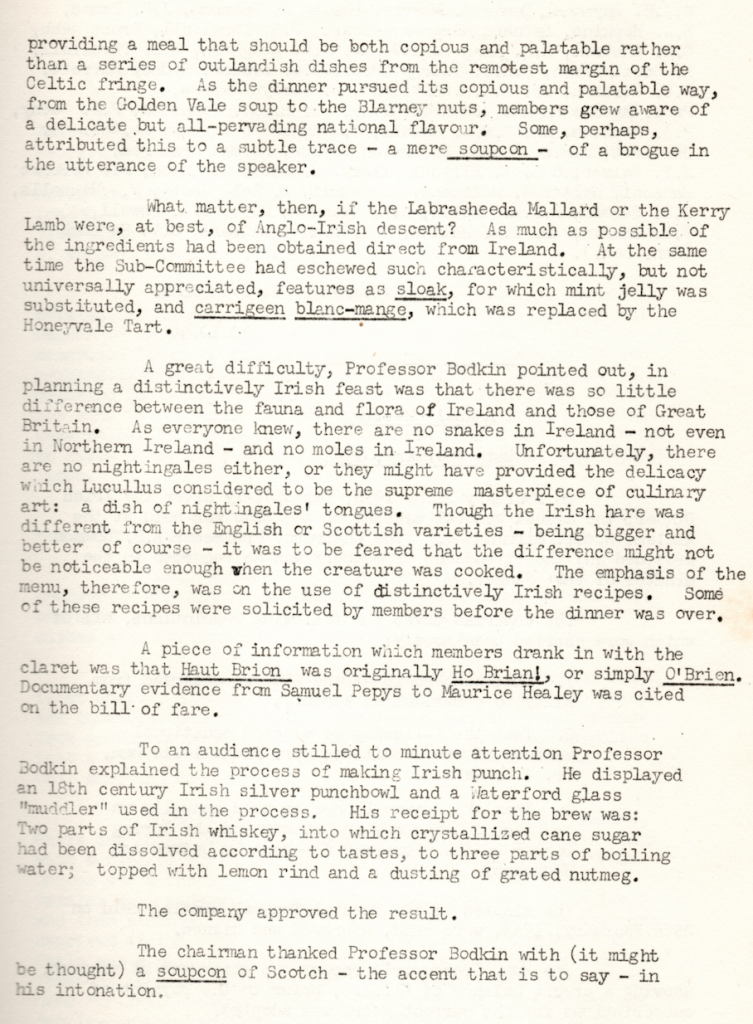 A piece of information which members drank in with the claret was that Haut Brion was originally Ho Brian!, or simply O’Brien. Documentary evidence from Samuel Pepys to Maurice Healey was cited on the bill of fare.

To an audience stilled to minute attention Professor Bodkin explained the process of making Irish punch. ‘He displayed an 18th century Irish silver punchbowl and a Waterford glass “muddler” used in the process. His receipt for the brew was:

Two parts of Irish whiskey, into which crystallized cane sugar had been dissolved according to tastes, to three parts of boiling water; topped with lemon rind and a dusting of grated nutmeg.

The company approved the result.

The chairman thanked Professor Bodkin with (it might be thought) a soupcon of Scotch – the accent that is to say – in his intonation. 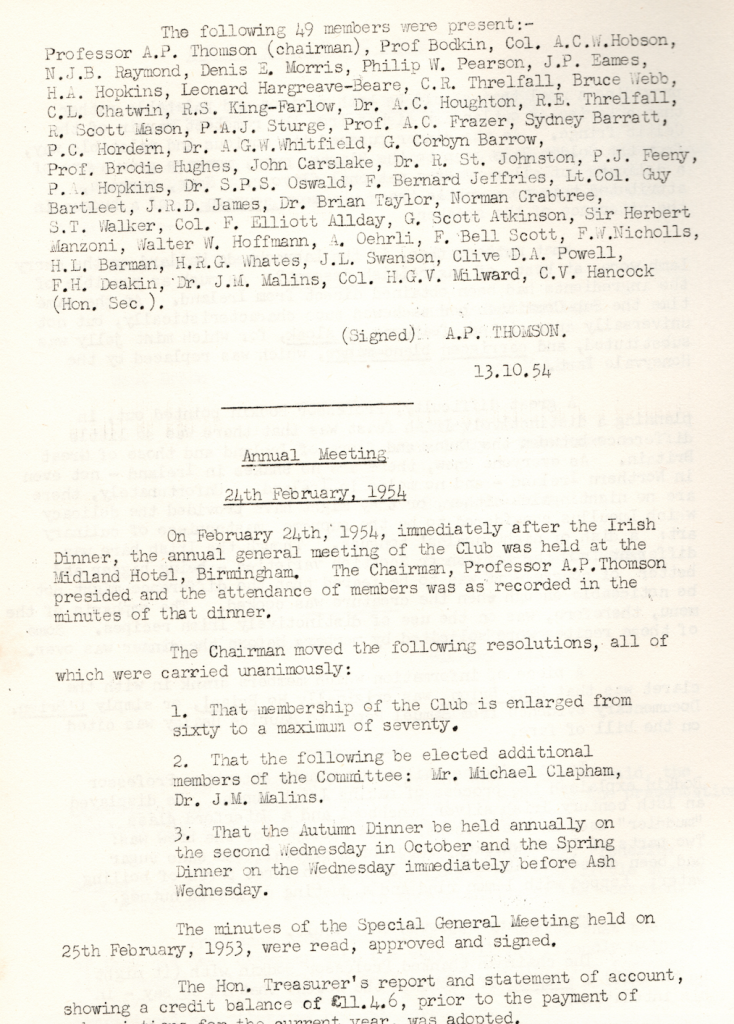