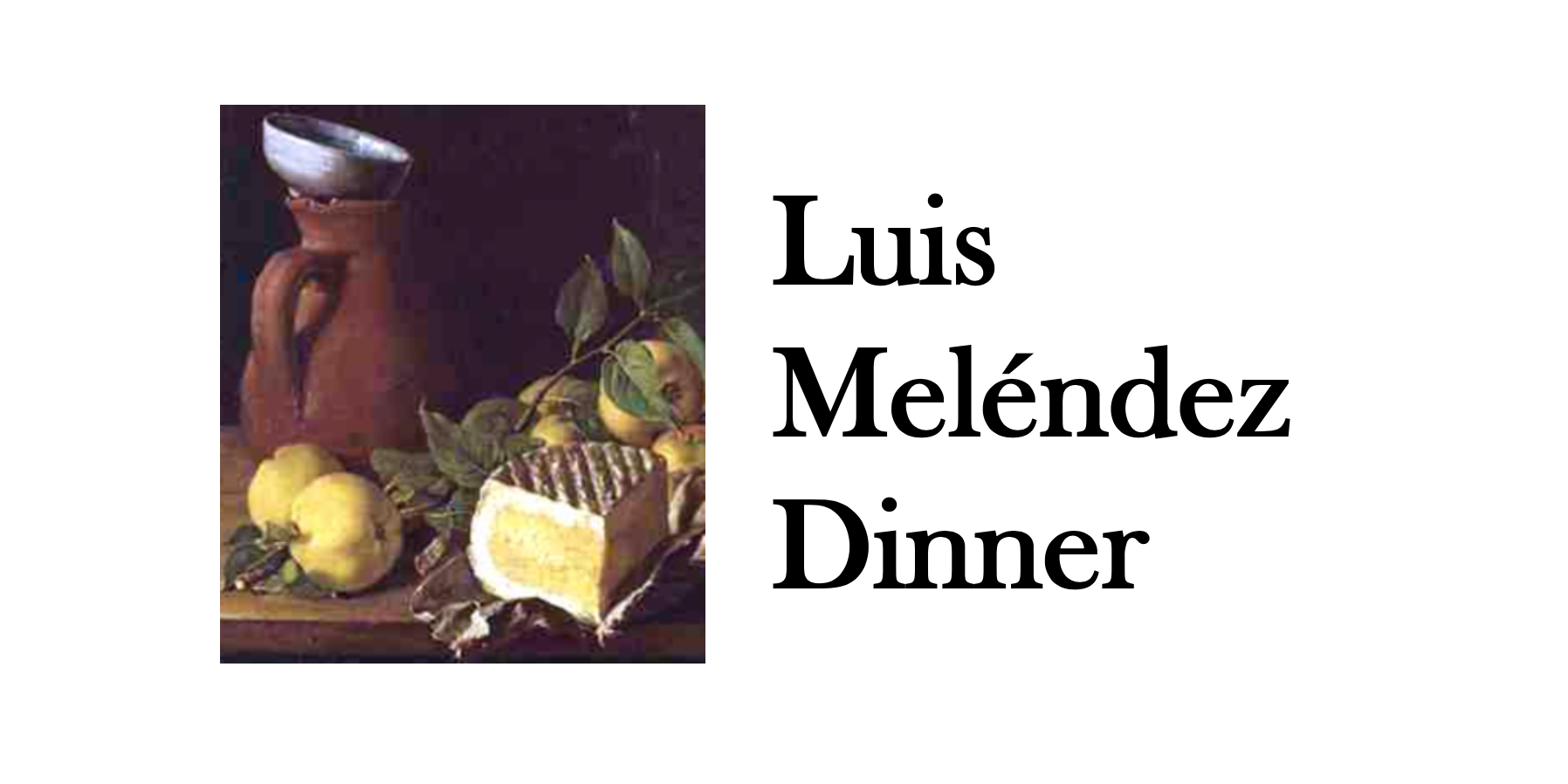 Gastronomy in the Still Life Paintings of Luis Meléndez

On April 12th, 2012 64 members and guests of the Buckland Club assembled at the Edgbaston Golf Club, Birmingham for a dinner on the theme of Gastronomy in the Still Life Paintings of Luis Meléndez. The sponsor was Gillian Riley.

Before dinner we were treated to a liberal selection of Tapas listed as Morcilla – Black Pudding – Tortilla – no need for translation there – Aceitunas – olives – Jamõn Iberico – we can handle that one too, – Waitrose sell it – Almendras –almonds – and Dried Figs – not in Spanish – to accompany a delicious Montilla,  a wine easily – and indeed was – mistaken for a Fino Sherry, the difference being that whereas the latter comes from Jerez, the former is made near Cordoba.  These preprandialia set the tone of the evening, refined food and wine, carefully put together and of the highest quality, with the olives, and the cheese we were to encounter later, brought over from Spain. We knew we were in for a special evening when on sitting down at the table we were each presented with a folding carded menu, illustrated with reproductions of a selection of the painter’s still life oeuvre. These were displayed and numbered as in an art gallery, each linked to a course, titled in Spanish. That we were eating in a golf club brought to mind the possibility that some members, who visit the Costa del Sol to chase the sun or to bang a ball about and then spend time trying to find it, would have had no difficulty in translating the Spanish terms. For others, relief came in the extensive use of English. 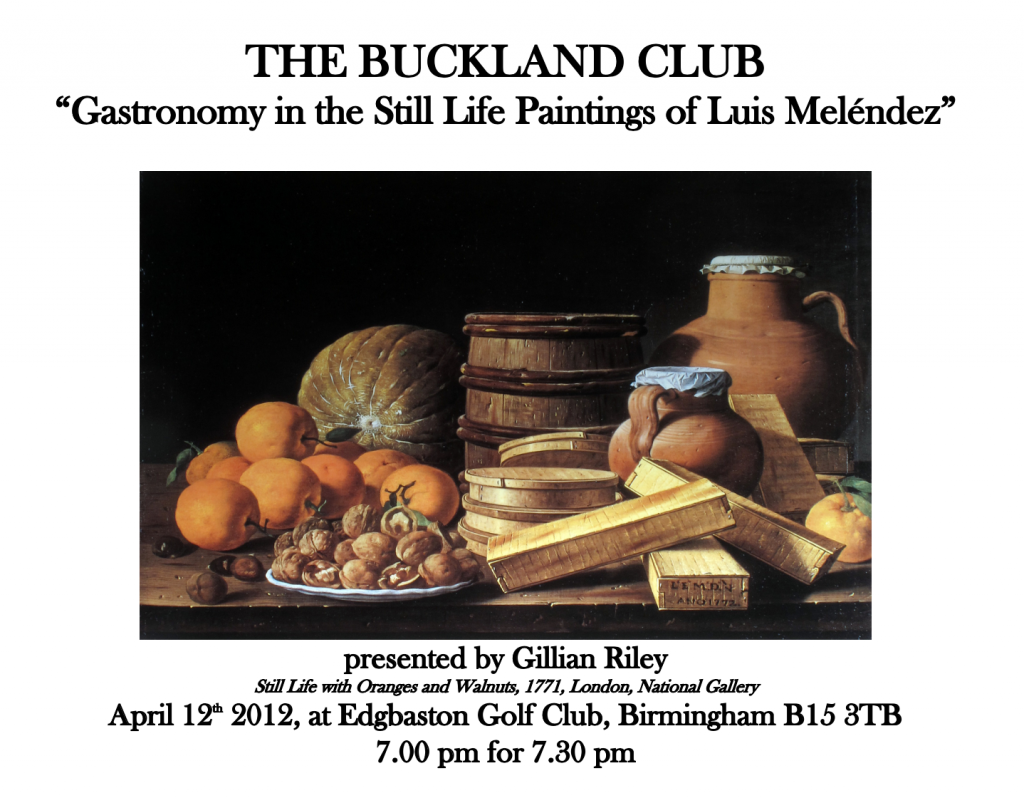 As a preamble to the meal she told us something about the painter’s life. Born in Naples, part of the Spanish colony of the Two Sicilies, he moved, aged one, to Spain with his family, where, apart from a period when he returned to Italy, he spent the rest of his life. He wanted to be a History Painter, the topmost genre of the hierarchy constructed by Le Brun of the French Academy, but was unsuccessful in that field. He did however have a talent for still-life, for which he is now remembered. Indeed there are two examples of his work in the National Gallery, one of which was reproduced on the menu card, Still Life with Oranges and Walnuts, 1771. This brief biography was accompanied by a slide show of some of his paintings.

Having thus presented a verbal and visual portrait of the man, our sponsor then paid tribute to Vicky Heyford for sourcing some of the ingredients of the meal, and to Tim Balfour, the chef, for adapting the recipes.

Now for the meal proper, and delicious it was to prove to be as we might have guessed from the foretaste we had had with the tapas. The Entremeses, as they were called, comprised a salad of Jamón Iberico, Fresh figs, Manchego, Salted Almonds and mixed leaves. The observant will have noticed that the cut loaf to which the food was referenced was almost identical to the loaf in the picture that inspired the choice of Tapas. The wine served with this course was a 2011 white Rioja from Muga made from the increasingly fashionable Viura grape with 10% Malvasia.

The fish course, Pescado, consisted of Black Bream with wilted spinach, Cauliflower and Salt Cod, all with a Bitter Orange Sauce, a gastronomic commentary on the ingredients of a still life in the Prado, titled Bream with Oranges. Served with this was a Viña Eguia ,Crianza 2007. Our sponsor drew our attention to the geometry of the painting particularly in regard to the diagonals , the angle of the pestle in the mortar as well as the fish pointing up to the bottle. She also told us that, as a mark of respect for the social sensibilities of Buckland members, the chef, by limiting the garlic content, had modified the crude sauce that would normally have gone with this dish, doubtless to the later relief of partners who could not attend the evening,

The objects in the meat course painting, Carne, were game with a lemon, tomatoes and a copper pot. The food that we were given to echo this was pigeon, seasoned with spices, lemon juice and peppercorns together with a minestra of seasonal vegetables. The bird was beautifully tender. In commenting on this our sponsor advised us not to source birds from Trafalgar Square as they tended to be somewhat coarse. The accompanying wine was a Torre Aldea, Gran Reserva 2005 from Rioja Baja. As we were later informed by Christopher Firmstone, who was responsible for choosing the wines, Bebidas, and describing them to us, this came from the less rated part of Rioja. For all that, we thought it outstanding and indeed congratulated him on his selection overall.

The last course, Queso, followed a painting of cheese and fruit and a jug. We were given more Manchego, Membrillo – Quince jelly, in English – and biscuits. Delicious as it was, the image here was slightly tarnished by the presentation of the butter –  Anchor in a wrapped pat. Served with this was a rare 30yr old Palo Cortado, a wine which, drunk daily by the grandmother of one of our members, so our Chairman told us, kept her alive till she was 101. Small wonder that it is now in short supply.

As the evening came to a close, its pleasures were noted in the Chairman’s formal thanks to the sponsor, endorsed by the spontaneous comments of one of the members and applauded to the echo by the assembled company. It had been a marriage of art history and gastronomy at the highest professional level. In her contribution to the Oxford Food Companion, our sponsor gave Manet’s Dejeuner sur L’Herbeas another example where art and food come together. Now there’s a thought as the theme for a future Buckland event. Perhaps a summer picnic.

Past Dinners
Recipes
Go to Top
This site uses cookies: Find out more.