One of the most successful dinners in recent memory was the Trans-Siberian Dinner sponsored by renowned culinary author Sharon Hudgins.  Below is a link to Sharon’s blog that gives an enormous insight into a tremendous evening, that is still referred to with enormous fondness by those that were lucky enough to attend. 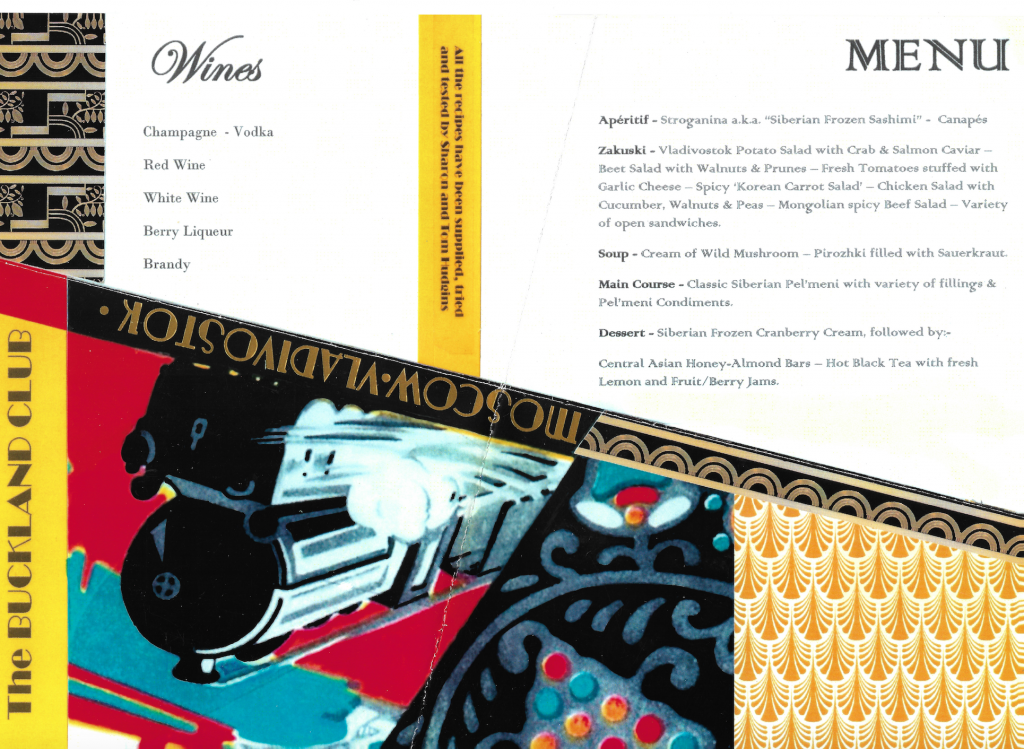 Minutes of a Trans-Siberian Railway Dinner

Since the mid 19thcentury and to the present day railways have been woven into the fabric of Russian life. In literature, a train was the instrument through which Tolstoy’s Anna Karenina ended her sad life, then there is the Convict Train of which he wrote in Resurrection and a railway station was even the locus of his demise,, life imitating art..  And it was on a train, not all that many years later, cataclysmically in terms of world events, that Lenin arrived in secret at the Finland Station in Petrograd on his return to Russia in 1917 and we all know what occurred after that.

But of course, not all that happens round Russians trains is bad. Indeed what we were to hear later more than redressed the balance, although we were to be told in the course of the evening of the doctor on board one of the Trans Siberian excursions who was left behind on the platform in his running clothes when he returned from a jog at one of the stops, catching up with the party only after three days.

Our own experience, vicarious though it was, was nothing but joyous. On the 14thof March 2013 members of the Club and their guests, 83 in all, assembled at the clubhouse of Edgbaston golf course, not after an 18 hole round, but to partake of a menu based on fare served on the Trans-Siberian Railway. Those attending may reflect on how lucky they were given that there are nowadays speedier forms of transport, that this was not an Aeroflot dinner.

The sponsors of the event were Sharon and Tom Hudgins, experts travelling the world on a ticket of, among other subjects, the Trans-Siberian Railway and its food, and it was with this topic that they came from Texas to Birmingham – West Midlands, not Alabama.

On arrival we were served sparkling wine and Vodka and ate canapés of frozen trout and sea bass, known as Stroganina, so cold they might have been drilled out of the Siberian permafrost.

We then sat at table, but before the meal proper, we were treated to the voice of Sharon accompanied on the keyboard by Tom, the keyboard in this instance being that of a laptop computer not a piano, with Sharon giving voice to a slide presentation on the Trans-Siberian Railway and its cuisine, rather than a recital of leider  And beautifully presented it was too. We were taken through the Russian countryside, the towns and stations through which the train passed, together with their buffets, historical photos of trains, carriages, staff and food, as well as photos of its current luxurious incarnation, the Golden Eagle. In regard to this last, in the absence of its owner, Tim Littler, we were fortunate to have representatives of the company that runs it, Ian Lomas and John Drogan, as our guests.

This was a worthy introduction to the food. To say the latter was outstanding is an understatement. All averred it was one of the best meals we have had in recent times. That this was so received support from the fact that, following the event, the Honorary Secretary has been flooded with requests for the recipes, graciously and generously offered by the sponsors.

We began with a series of hors d’oeuvres, Zakuskiin Russian, little bites– Vladivistok Potato Salad with Crab and Salmon Caviar, Beet salad with Walnuts and Prunes, Fresh Tomatoes stuffed with Garlic Cheese, Spicy “Korean” Carrot Salad, Chicken Salad with Cucumber, Walnuts and Peas, Mongolian spicy Beef Salad and a variety of open sandwiches, a spectacular array both to look at and taste. As an accompaniment to the food, we were given a history of the dishes as well as shown a photo of the modern version.

The next course was a Cream of Wild Mushroom soup accompanied by Pirozhki filled with Sauerkraut. Those of us who thought that sauerkraut was simply associated with the contested Franco–German border were surprised to hear of a Mongolian provenance. Older Buckland members might have been put off had they learnt this in advance, as they will have remembered a Mongolian Dinner where the horse could not be served because it was found to have malignant disease and the alcoholic drink accompanying the meal was fermented asses’ milk.

We were then served Siberian Pel’meni, onefilled with salmon, the other with venison. As with the Zakuski first course, these were placed on the table for us to help ourselves. Described as dumplings, they resembled tortellini, and were utterly delicious. With them were served a selection of garnishes, sour cream, black vinegar, soy sauce, green onion and dill butter.

The dessert was Siberian Frozen Cranberry Cream – not quite permafrost – followed by Central Asian Honey – Almond Bars with Hot Black Tea with fresh Lemon and Fruit/Berry jams. What a treat!

Of the drinks the preprandial fizz was a Bagratoni Brut from Georgia – Brussels would have been most unhappy had it but known it was labeled on the menu card as a Champagne. For the white, in the absence of a Château Omsk or a Clos de Vladivostok, we had recourse to a Hungarian Furmint 2010/11 and for the red to a Bulgarian Vinica Zagreus, Mavrud Reserve 2006, the latter made like an Amarone. After these came the vinous stars of the evening, dessert wines from the Massandra Collection, established by the ill-fated Tsar Nicolas II in the 1890’s and now owned by Tim Littler who generously provided them for our delectation as well as making them available for subsequent purchase. For the winos among us there was the added benefit of having detailed notes.

Finally we were served a Georgian Sarajishvili brandy. With this there was always the possibility, having been educated in Russian party culture over the course of the evening, that we might have been asked to smash our glasses against the wall. Fortunately we weren’t.

As is our custom, the chef, Tim Balfour, his kitchen brigade, and the serving staff, were called in following the meal to receive our thanks, so well deserved, and for their health to be drunk. The food was a culinary tour de force. The chef, working with the sponsors, brilliantly interpreted the recipes, giving us a taste of the cuisines of the countryside through which the train passed. Finally the chairman thanked the sponsors who had made it such a memorable occasion, a gripping travelogue accompanied by food and wine, or was it wonderful food and wine surrounded by a travelogue? Whatever, we will remember it as a Buckland highlight.

However, these minutes cannot be concluded without a mention of the carded menu, designed by our Chairman, which set the scene for the evening.  Its design, art deco fonts and image of a locomotive, together with its ornamentation and colouring and map of the Trans Siberian line, were all at one with the presentation, evoking the romanticism and capturing the glamour of the long train journey – Le Train Bleu, the Simplon-Orient Express, the 20thCentury Limited, and, of course, the one we had been hearing about. This was the stuff that dreams are made of. Would that we all had the opportunity to translate the virtual into the real. 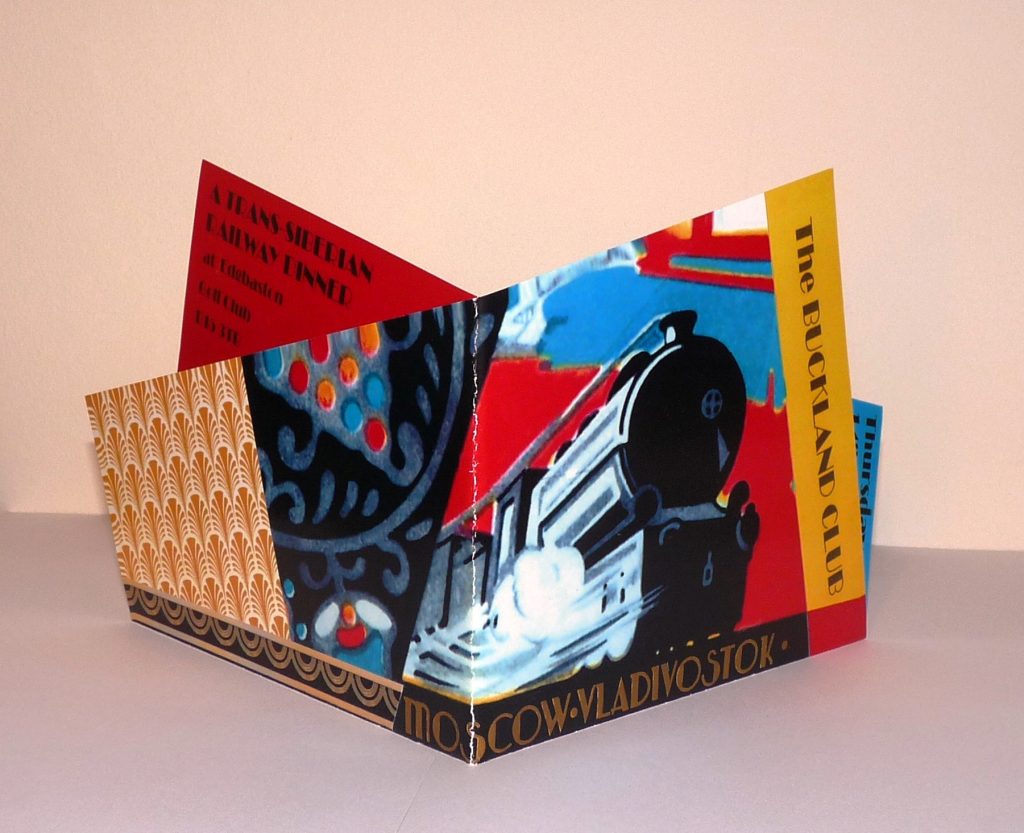