Minutes of A Horse Dinner

I was invited to a horse dinner a few weeks ago.

I don’t very often dust off the dinner jacket, especially for midweek shenanigans, but I wasn’t about to turn this down. A meeting of the Buckland Dining Club, which meets twice a year. It’s named after a Victorian chap called William* Buckland. To quote the Guardian’s article

“Buckland’s obsession with the animal kingdom knew no bounds. As President of the Royal Geographical Society he published the first scientific study of a dinosaur skeleton, while his role at the Society for the Acclimatization of Animals allowed him to import all sorts of creatures into the UK in order to study their suitability for the dinner table. Rather conveniently, this coincided with his lifelong personal ambition, which was to eat an example of every animal in existence, like some kind of crazed, bloodthirsty Noah.”

A man after my own heart, so to speak.

Anyway, here’s what we had. 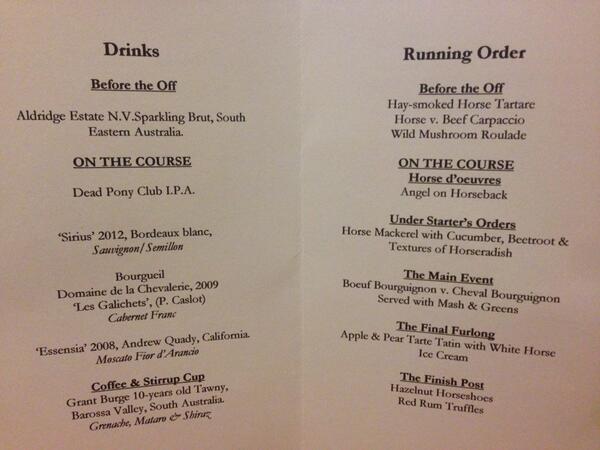 A selection of Canapés, served whilst we milled about drinking fizzy stuff.

Hay smoked horse tartare – About as horsey as it gets, surely? Served on some kind of wheat biscuit, with a tiny dollop of something on top. I would have actually preferred it dollopless. But the meat’s lovely. Really lean and tender, spot on.

Horse vs. Beef carpaccio – The first of the evening’s Equine / Bovine showdowns. Horse was a clear winner here, it’s just perfect served as carpaccio. The beef was very nice also.

Horse d’oeuvres – A shot glass containing a raw oyster and warm smoked bacon broth, with itty bitty cubes of veg (itty bitty is the official French term). It was outstanding. Shame it was just one each, I could have gone for a couple more quite easily. Served with Brewdog’s superb “Dead Pony Club” IPA.

Horse mackerel with cucumber, beetroot and textures of horseradish – The chef said that horse mackerel is just normal mackerel. I mentioned this to my friend, who’s a bit of a fish expert and he said that was nonsense and that it’s a completely different fish. It turns out that “horse mackerel” can refer to all sorts of fish, but in the UK it normally refers to the Atlantic Horse Mackerel – which wasn’t what we were eating that night.

Anyway – it was a delicious starter. A warm mackerel fillet served on thinly sliced beetroot discs, with a small, but beautifully pickled pile of cucumber, horseradish cream and what I can only describe as, “a line of powdered horseradish”. All very nice. I would have liked more cucumber, but hey.

Boeuf Bourguignon v. Cheval Bourguignon – the evening’s second horse v. cow showdown. Served with mash and greens, we were invited to guess which meat was which. It was really very obvious, and the beef was the clear winner tastewise. Horse seems too lean for long, slow cooking, and was a bit dry as a result, whereas the beef was fattier and therefore perfect, all fork-falling apart loveliness.

It came with a Domaine de la Chevalerie 2009 ‘Les Galichets’ – which I assume was chosen because it’s red and has the word ‘cheval’ in the title. I could say that it has a full aromatic dark cherry nose, with blackcurrant and gravelly notes throughout, a midweight palate and dancing fruity tannins. I could say that, but I’m not a massive wine ponce so I won’t. What I will say however is that it was very bloody nice.

Hazelnut horseshoes and Red Rum Truffles – by this point I was feeling like I was about to give birth to a foal, but in for a penny, as they say. These were good, but nothing to write home about. Served with a 10 year old Tawny port, which was very nice indeed – I didn’t even know those existed. Might have to buy a bottle for Xmas.

It was a really enjoyable meal – I didn’t take any pictures as it didn’t seem appropriate, but you get the idea.

Try horse meat if you get the chance. It’s bloody delicious!

*Chairman’s note – the Club is named after Frank Buckland, rather than his father William, the early geologist and ‘dinosaur hunter’. Both father and son are noted British eccentrics, celebrated for their love of curious food. This is a common, and understandable, misunderstanding with both guests as well as some members.